Background: Several neoadjuvant treatments are available for patients with resectable gastroesophageal cancer. We did a Bayesian network meta-analysis (NMA) to compare available treatments, summarizing the direct and indirect evidence.

Method: We searched relevant databases for randomized controlled trials of neoadjuvant treatments for resectable gastroesophageal cancer which compared two or more of the following treatments: surgery alone, perioperative docetaxel, oxaliplatin, leucovorin, and fluorouracil (FLOT), and neoadjuvant treatments listed in National Comprehensive Cancer Network guideline. Then we performed a NMA to summarize the direct and indirect evidence to estimate the relative efficacy for outcomes including overall survival (OS), progression-free survival and R0 resection rate. We calculated odds ratio (OR) and hazard ratio (HR) with 95% credible intervals (CrI) for dichotomous data and time-to-event data, respectively. We also calculated the surface under the cumulative ranking curve (SUCRA) value of each intervention to obtain a hierarchy of treatments.

To solve above problems, we conducted a Bayesian network meta-analysis (NMA). In the Bayesian hierarchical model, we can combine direct and indirect comparisons to compare two or more inventions at the same time when head-to-head studies are not available (Lumley, 2002; Song et al., 2003; Rucker, 2012; Dias et al., 2013). Our NMA aimed to summarize the direct and indirect evidence to obtain the estimates of relative effectiveness for perioperative FLOT and available neoadjuvant treatments listed in the NCCN guidelines for resectable GC.

The bibliographies of included studies were also checked for additional trials.

We only included the RCTs that compared at least two arms of following treatments: surgery alone, perioperative FLOT, surgery combined with neoadjuvant treatments involving chemotherapy or chemoradiotherapy listed in the NCCN guidelines. Patients had been histologically proven gastric or lower third of the esophagus cancer with no evidence of distant metastasis.

We excluded studies if they were non-RCTs. Trials without enough data for us to estimate hazard ratios (HR) for survival were also excluded. Studies enrolling patients with esophageal cancer were excluded when data for gastric and lower third of the esophagus cancer were not separately extractable and/or the study included a limited number of patients with gastroesophageal cancer (<80%).

Assessment of Risk of Bias and Data Collection

Qualitative assessment and data extraction were finished by two investigators independently; disagreements were resolved in discussion with a third author. The two authors independently extracted data from each enrolled study according to the same standardized collection form.

The quality and the risk of bias of RCTs were assessed by Cochrane Collaboration’s tool in terms of sequence generation, allocation concealment, blinding of participants and researchers, incomplete outcome data, selective reporting, and other bias (Higgins et al., 2011; Higgins and Green, 2014). Blinding was not performed in all the enrolled trials, but assessment of survival was not likely to be influenced by lack of blinding of participants and researchers.

The primary outcome of our NMA was OS, and the secondary outcomes were PFS and R0 resection rate. Time-to-event outcomes such as OS and PFS were assessed by HRs which take the number and timing of events into consideration with its 95% CI (Higgins and Green, 2014). For dichotomous data, treatment effects were expressed as odds ratio (OR). 95% credible intervals (CrIs) which could be interpreted as 95% CI were used for the estimating treatment effects of NMA.

We calculated values of the surface under the cumulative ranking curve (SUCRA) of each intervention to obtain a hierarchy of treatments. A higher SUCRA value indicated a better efficacy (Salanti et al., 2011).

The characteristics of included studies are shown in Table 1. A total of 2434 patient treated in seven different treatments were included: 701 treated with surgery alone; 113, perioperative cisplatin with fluorouracil (CF); 207, preoperative CF; 610, perioperative epirubicin, cisplatin, and fluorouracil or capecitabine (ECF/ECX); 356, perioperative FLOT; 234, preoperative radiotherapy combined with CF (RT/CF); 213, preoperative radiotherapy, paclitaxel, and carboplatin (RT/PC). The network plots of OS, PFS, and R0 resection were shown in Figure 2, each node represents a treatment and the thickness of lines represents the number of trials.

FIGURE 2. Network of the comparisons for the Bayesian network meta-analysis. (A) Overall survival; (B) progression-free survival; (C) R0 resection rate. The size of the nodes and the thickness of the edges are weighted according to the number of studies evaluating each treatment and direct comparison, respectively. 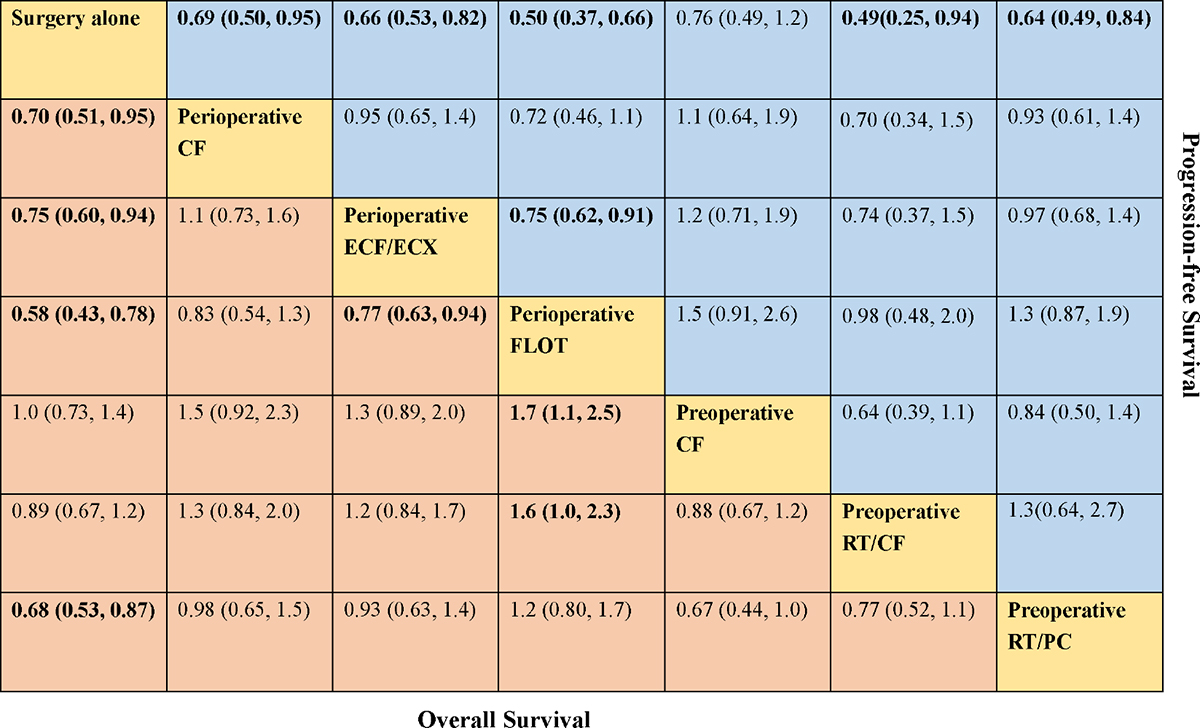 FIGURE 4. Forest plots of results with surgery alone as the common reference.

TABLE 2. The SUCRA value of different treatments on each outcome.

The assessment of the risk of bias for selected studies in the NMA was shown in Figure 5 according to the Cochrane risk-of-bias tool, indicating low risk of bias.

FIGURE 5. Risk of bias graph for all studies included.

The node-splitting method suggested that there was no statistically significant inconsistency in any closed loop (P > 0.05) (Supplementary Figure S1).

In the absence of head-to-head comparative data, a definitive statement on the optimum neoadjuvant treatment for resectable gastroesophageal cancer is still absent. NMA synthesizing both direct and indirect evidence provides more powerful estimates and allows comparisons of relative effectiveness between interventions that have never been compared head to head. In this NMA, we combined direct and indirect evidence from seven RCTs involving 2434 patients with resectable gastroesophageal cancer to estimate the relative efficacy of included neoadjuvant treatments for outcomes including OS, PFS, and R0 resection rate.

The JCOG0501 trial explored neoadjuvant S-1 and cisplatin versus surgical resection followed by S-1 for type 4 and large type 3 GC, and the results suggested that neoadjuvant chemotherapy was safely performed without increasing morbidity and mortality (Japan Clinical Oncology Group, 2005). The results of survival will be demonstrated soon and promising.

Our NMA has several limitations. First, based on meta-analyses of summary data, it was difficult for us to explore the impact of tumor location which might be the potential source of heterogeneity. Second, survival benefits must be balanced against risk of adverse effects. However, we could not conduct a quantitative synthesis on adverse effects associated with the relevant treatments because the data on adverse events were rarely available. Al-Batran et al. (2016) suggested that non-surgical adverse events in both perioperative ECF/ECX and perioperative FLOT were well tolerated and the incidences of adverse events were similar, and further clinical studies are needed. Third, some additional neoadjuvant treatments including S-1 combined with cisplatin and paclitaxel plus cisplatin are under study for the treatment of resectable GC (Yoshikawa et al., 2016). The study suggested that two courses of S-1 and cisplatin should be recommended as a reference arm in future to evaluate neoadjuvant chemotherapy for GC (Yoshikawa et al., 2016). However, the treatments mentioned above were excluded for the shortage of treatments which could connect the network nodes. Fourth, only a limited number of studies (n = 8) were included in the analysis. Furthermore, the best performing treatment (perioperative FLOT) has been investigated in only one study. Although no obvious inconsistency and severe risk of bias were detected, the limited number of trials and patients weakens the external validity of our study.

BZ, ZlC, and YiY designed the study. JW and XY screened studies and extracted data. Disagreements were resolved by discussion with YuY. ZlC and ZZ performed the statistical analyses. CX and ZhC prepared the figures and tables. BZ, ZxC, YZ, CS, and ZhC reviewed the results, interpreted data, and wrote the manuscript. All authors read and approved the final version of the paper.

This work was supported by National Natural Science Foundation of China (No. 81572931).

The Supplementary Material for this article can be found online at: https://www.frontiersin.org/articles/10.3389/fphar.2018.00872/full#supplementary-material

Copyright © 2018 Cai, Yin, Zhao, Xin, Cai, Yin, Shen, Yin, Wang, Chen, Zhou and Zhang. This is an open-access article distributed under the terms of the Creative Commons Attribution License (CC BY). The use, distribution or reproduction in other forums is permitted, provided the original author(s) and the copyright owner(s) are credited and that the original publication in this journal is cited, in accordance with accepted academic practice. No use, distribution or reproduction is permitted which does not comply with these terms.