Male db/db and wild type mice (8 weeks old) on the C57BL/KsJ background were provided by Model Animal Research Center of Nanjing University (China). The animals had freely available food and water and were housed under 12 h–12 h light/dark cycles at 23 ± 2°C. Six animal groups were set up with mice randomly assigned: wild type, db/db, metformin (20 mg/kg), CPT-L (0.25 g/kg), CPT-H (0.5 g/kg), and fasudil (5 mg/kg) groups. After 1 week of adaptive feeding, mice were administrated drugs daily for 4 weeks and euthanized by an overdose of anesthetics. Body weight was measured every week. Then, serum specimens and livers were obtained for further studies. All animal experimental procedures had approval from China Pharmaceutical University (CPU.2012-003) and were performed according to the National Institutes of Health Guidelines for the Care and Use of Laboratory Animals (NIH Publications No. 8023, revised 1978).

For the oral glucose tolerance test (OGTT), mice received an oral administration of 2 g/kg glucose at 8:00 am after overnight fast. Tail vein blood specimens were obtained from mice at 0, 30, 60, 90, and 120 min, respectively, upon glucose administration. Blood glucose was detected with a Surestep glucose analyzer (LifeScan, Inc., CA).

Livers were collected from euthanized animals and submitted to fixation with 10% formalin. After paraffin embedding, 3-μm sections were obtained and submitted to hematoxylin–eosin (H&E) staining as directed by the manufacturer. Liver sections were immunostained with rabbit anti-insulin polyclonal antibodies (Cell Signaling, Danvers, MA) followed by incubation with the avidin–biotin peroxidase complex (DAKO, CA). Stained sections were imaged to observe pathological changes under a light microscope.

HepG2 and LO2 cells from Shanghai Cell Bank of the Chinese Academy of Sciences were cultured in Dulbecco’s modified eagle’s medium (DMEM) containing 10% fetal bovine serum (FBS) and 1% double antibiotics (penicillin and streptomycin) in a humid environment with 5% CO2 at 37°C. Cells were seeded into six-well plates until a confluency between 70% and 80%. The cells then were pretreated with CPT (2, 4, and 8 μg/ml) and fasudil (10 μM) for 2 h prior to incubation with or without palmitic acid (100 μM) for 6 h under serum-starvation conditions.

Live cells were quantitated by the MTT assay. HepG2 and LO2 cells were plated in 96-well plates (5 × 103/well), incubated with different CPT (1, 2, 4, 8, and 16 μg/ml) amounts for 2 h, and treated with palmitic acid for 6 h prior to incubation with 5 mg/ml MTT (Sigma, Cat. #M2128) for 4 h. After incubation, the solution was discarded, and formazan crystals were solubilized with 150 μl/well dimethyl sulfoxide (Cat. #75927N). Optical density was detected at 570 nm on a microplate spectrophotometer. Cell viability (%) was determined as (ATreated/AControl) × 100%. The aim of LDH release assay was to determine the quantification of cytotoxicity based on the release of cytoplasmic LDH into culture media from damaged cells. HepG2 and LO2 cells were treated as above, and cell supernatant was collected. LDH release into media was measured according to the manufacturer’s protocol.

TC, TG, AST, ALT, and insulin amounts in mouse serum specimens and HepG2 cell supernatants after treatment with palmitic acid were assessed by ELISA. In addition, IL-6, IL-1β, and TNF-α amounts in serum samples, liver tissue specimens, and HepG2 cell supernatants were evaluated with respective ELISA kits, as directed by the manufacturer. These cytokines were quantified using standard curves. All other chemicals used were of analytical grade.

Livers were removed from euthanized animals at the end of experiment and post-fixed in 4% PFA at 4°C overnight. Then, 5-μm sections were obtained, submitted to permeabilization for 2 h with 0.4% Triton X-100 (Santa Cruz, Cat. #sc-29112) and blocking (1% BSA for 2h in ambient conditions). Each section was next sequentially stained with primary (72 h at 4°C) and secondary (2 h in ambient conditions) antibodies. After PBS washes, the slides were dehydrated, followed by mounting with the VECTASHIELD mounting medium. Imaging was performed under a Leica confocal microscope. 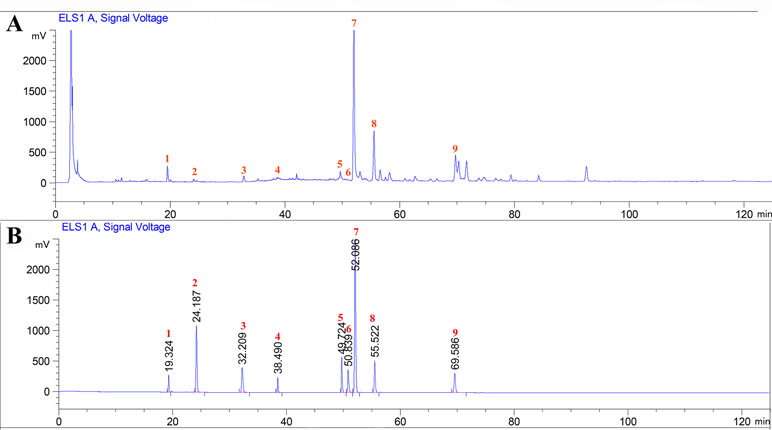 Effect of CPT on OGTT and Body weight

As shown in Figure 2A, glucose exposure (per os) significantly increased blood glucose levels in db/db mice group as compared with wide-type group, and a gradual reduction was present after CPT (0.25 or 0.5 g/kg) treatment. Blood glucose levels in db/db animals administered with CPT (0.25 or 0.5 g/kg) showed a significant increase at 30 min, but reversed to basal amounts within 2 h of glucose ingestion; a comparable trend was observed for the metformin and fasudil groups. Meanwhile, CPT significantly reduced body weight gain of mice in db/db mice at the second week after CPT administration in comparison with db/db group, which was defined at the fourth week as shown in Figure 2B. A comparable effect was shown in metformin and fasudil groups. 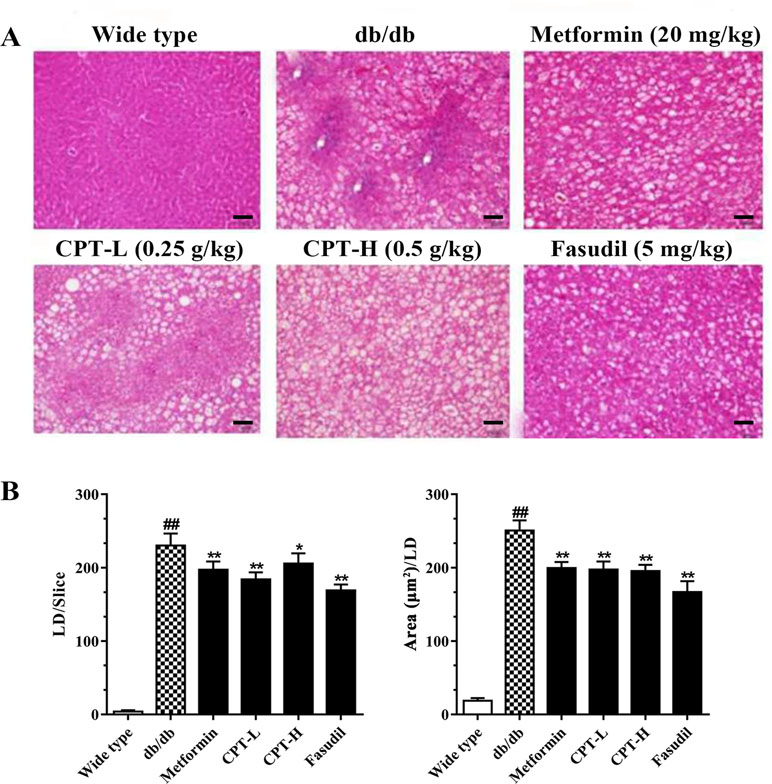 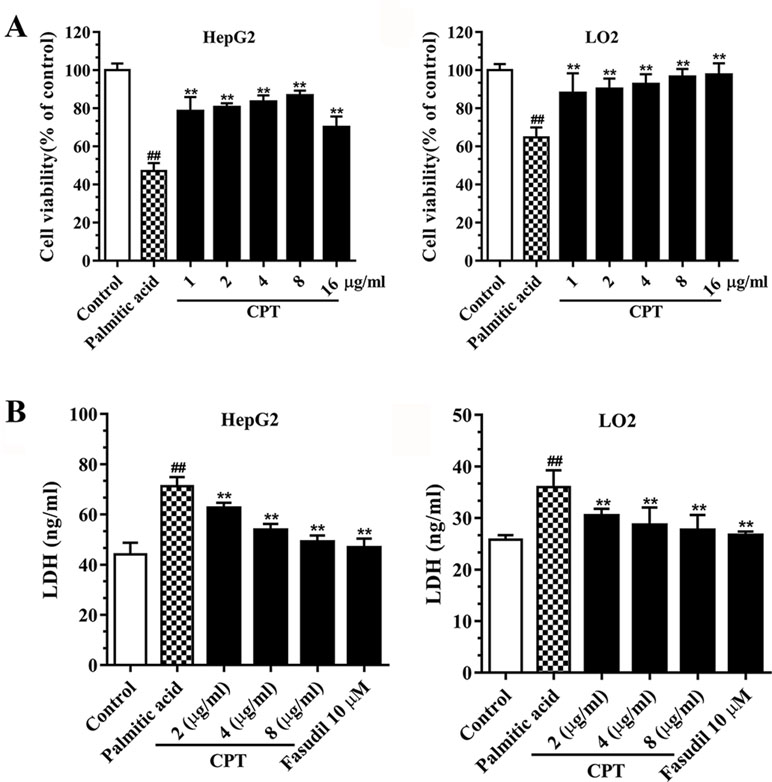 Effects of CPT on Serum and Secreted Biomarkers

Serum TC, TG, insulin, AST, and ALT amounts were significantly increased in the db/db group in comparison with wild type animals (Figure 5A). However, CPT, metformin, and fasudil, respectively, reversed the above effects. After palmitic acid challenge, the levels of TC, TG, insulin, ALT, and AST were increased in HepG2 cells; meanwhile, CPT pretreatment successfully reduced their amounts, with the 2 μg/ml dose showing more pronounced effects (Figure 5B). Thus, CPT effectively ameliorated the “lipotoxic state” and hepatic IR in db/db mice, which demonstrated that CPT prominently prevented the progression to hepatic fibrosis. 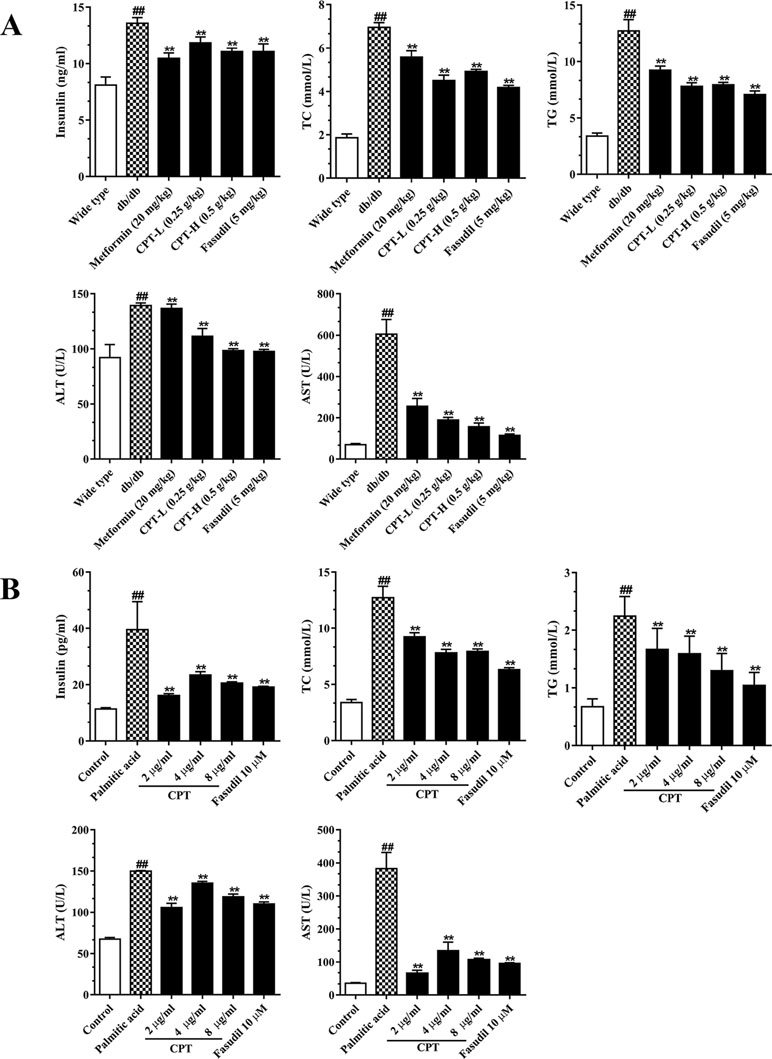 Hepatic inflammation represents an important feature of liver damage associated with diabetes as mentioned above. Increased pro-inflammatory in DM adversely accentuated hepatic/systemic IR and increased the risk of HCC (Plessis et al., 2015). Metformin and pioglitazone, both of which are the fist-line therapeutic agent in the treatment of DM with hepatic damage, histologically ameliorate hepatic steatosis or inflammation as well as improved survival in cirrhosis and HCC (White et al., 2015; Somwong and Suttisri, 2018). To assess whether CPT improves inflammatory responses in diabetes-induced hepatic inflammation, we assessed IL-6, IL-1β, and TNF-α amounts in serum (Figure 6A). The results revealed markedly increased serum amounts of these biomarkers in the db/db group. On the contrary, the CPT, metformin, and fasudil treatment groups, respectively, had significantly decreased serum amounts of IL-6, IL-1β, and TNF-α in comparison with model mice. In line with these results, palmitic acid challenged HepG2 cells secreted overtly increased amounts of IL-6, IL-1β, and TNF-α in comparison with control cells; CPT and fasudil effectively reversed these effects (Figure 6B). 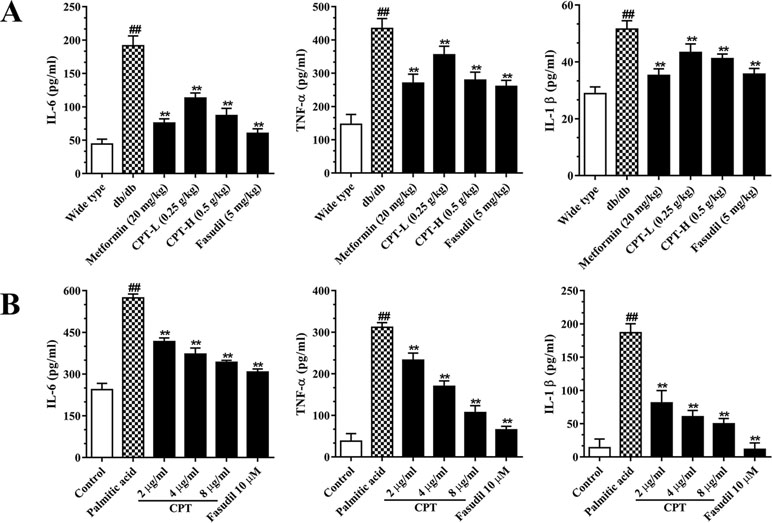 Effects of CPT on Rho-Kinase Pathway

Rho-kinase signaling plays an important role in the regulation of inflammatory cascades (Figures 7 and 8). The results indicated that protein expression levels of Rho, ROCK1, and ROCK2 were notably increased in liver samples from db/db mice. However, administration of CPT, metformin, and fasudil, respectively, obviously attenuated these effects. To clarify downstream mechanisms underlying CPT effects on diabetes-associated hepatic inflammation in db/db animals, IκB, NF-κB, IKKα, and IKKβ phosphorylation levels were assessed. We found that phosphorylation of these proteins was enhanced in the db/db group in comparison with wild type controls. Meanwhile, CPT (0.25 or 0.5 g/kg) overtly suppressed diabetes-associated phosphorylation of the above molecules. Meanwhile, metformin (20 mg/kg) and fasudil (5 mg/kg), respectively, also exerted comparable suppressive effects on the NF-κB signaling pathway. Similar trends were observed in vitro, with elevated Rho and NF-κB signaling activities after palmitic acid administration in HepG2 and LO2 cells (Supplementary Figure S1) in comparison with control cells. However, CPT and fasudil effectively reversed the above effects. Therefore, these findings proved that ROCK1 inhibition was capable of preventing NF-κB activation. 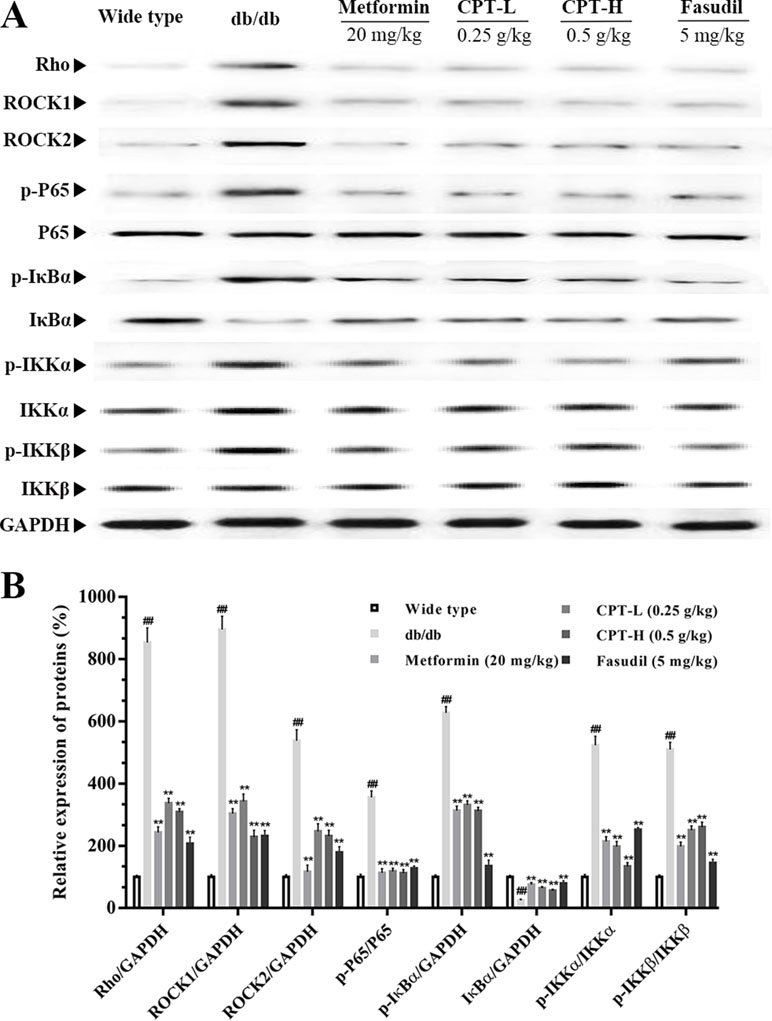 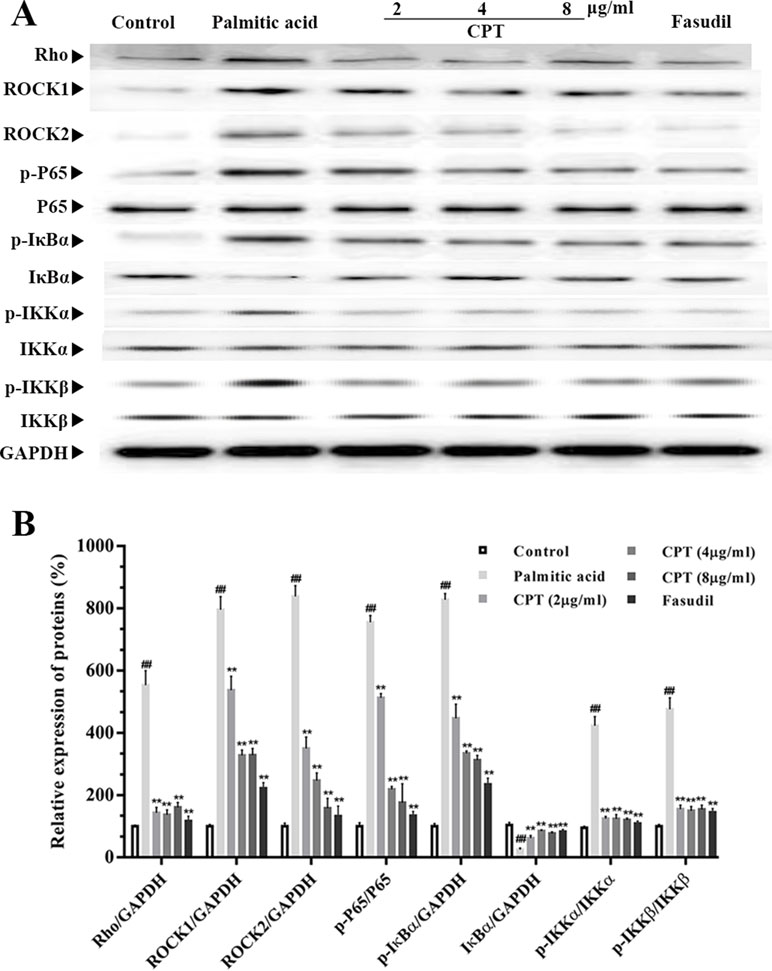 Rho-kinase signaling is critical in regulating inflammatory cascades. As shown in Figures 9 and 10, Rho and p-P65 amounts were markedly increased in hepatic tissue specimens from db/db mice; however, administration of CPT (0.25 or 0.5 g/kg), metformin (20 mg/kg), or fasudil (5 mg/kg) overtly ameliorated the above effects.

Diabetes is mainly characterized by hyperglycemia, lack of insulin activity and insulin, and is one of the fastest growing health issues across the world. The emerging pandemic is driven by rising levels of obesity, ageing, and longevity. Stress hyperglycemia exacerbates diabetic pathologies in the retina, kidney, nerve, liver, brain, and lower limbs through multiple abnormalities arising (Alberti et al., 1998; Alexander et al., 2000; Van Dieren et al., 2010). Chronic inflammation represents critical factor in the development of diabetes in metabolically active tissues such as the liver. In this study, we found that CPT effectively inhibited ectopic fat accumulation in diabetic mice liver. Furthermore, CPT significantly ameliorated OGTT as well as TC, TG, insulin, ALT, and AST amounts in diabetic mice and palmitic acid administered HepG2 cells. CPT not only significantly improved lipid metabolism and insulin responsiveness but also decreased circulating cytokines such as IL-6 and TNF-a. Moreover, CPT also reduced the hepatic expression of Rho-kinase and NF-κB, both of which are suggested to be a key link between hepatic inflammation and insulin resistance in vivo and in vitro. Taken together, this study demonstrated the beneficial effects of CPT on diabetic-induced hepatic inflammation.

Epidemiological findings indicating diabetes is a risk factor for liver damages such as HCC (El-Serag et al., 2004; Dharmalingam and Yamas, 2018). During type 2 diabetes (T2DM) progression, chronic inflammation represents a critical mechanism behind the pathogenetic process of liver damages (Kim et al., 2009). Increased FFA in diabetes flux into the ectopic tissues due to an increased rate of lipolysis aggravates hepatic IR, and the “lipotoxic state” results in hepatocyte necroinflammation (Plessis et al., 2015). In addition, hyperglycemia leads to transcriptional alterations and biochemical changes; then, many of these changes are attributed to oxidative stress. Increased presence of oxygen radicals further stimulate cytokine production and extracellular matrix proteins and the second “hit” that causes an increase in fibrosis (Giacco and Brownlee, 2010). Our data showed that CPT remarkably reduced TC, TG, insulin, ALT, and AST amounts in the “lipotoxic state.” Moreover, CPT significantly decreased content of TNF-a, IL-6, and IL-1β caused by second “hit” in diabetes. Thus, CPT not only significantly ameliorated lipid metabolism and insulin responsiveness but also decreased hepatic inflammation in diabetes.

Overall, we successfully identified the function of Rho-kinase signaling in diabetes-associated hepatic inflammation and illustrated the underlying mechanisms of Rho/ROCK/NF-κB-mediated inflammation. CPT was shown to have protective effects on the liver, using the db/db mouse model as well as the HepG2 cell line, and might improve diabetes-induced liver inflammation via ROCK signaling. CPT with reduced toxicity and fewer undesirable effects exerts a beneficial adjuvant drug for diabetes and its complications.

All animal experimental procedures had approval from the Animal Ethics Committees of China Pharmaceutical University (CPU.2012-003) and were performed according to the National Institutes of Health Guidelines for the Care and Use of Laboratory Animals (NIH Publications No. 8023, revised 1978).

CJ and YW performed the experiments and wrote the manuscript. QJ, DZ, MG, and NY contributed to sample collection and data analysis. ZY, JZ, and SM designed the research study. All authors participated in manuscript revision, and approved the final version prior to submission.

The Supplementary Material for this article can be found online at: https://www.frontiersin.org/articles/10.3389/fphar.2019.00811/full#supplementary-material

Copyright © 2019 Jiang, Wang, Jin, Zhang, Gao, Yao, Yin, Zhang and Ma. This is an open-access article distributed under the terms of the Creative Commons Attribution License (CC BY). The use, distribution or reproduction in other forums is permitted, provided the original author(s) and the copyright owner(s) are credited and that the original publication in this journal is cited, in accordance with accepted academic practice. No use, distribution or reproduction is permitted which does not comply with these terms.