Olanzapine is one of the most widely used second-generation antipsychotics (SGAs) for schizophrenia, bipolar disorder, and psychotic symptoms. Besides improving the main symptoms of psychosis, olanzapine shows great acceptability, decreases all-cause discontinuation, and prevents future relapse (Leucht et al., 2009). Many randomized clinical trials (RCTs) and meta analyses have suggested that olanzapine is one of the most efficacious antipsychotic drugs in patients with schizophrenia (Leucht et al., 2013; Huhn et al., 2019).

The most common adverse effects of olanzapine is weight gain (Allison et al., 1999). Olanzapine elicits the most weight gain of the SGAs. The Comparison of Atypicals for First Episode (CAFE) trial demonstrated that 80% of patients treated with olanzapine gained more than 7% of their initial body weight at week 52 (McEvoy et al., 2007). The discontinuation rate of olanzapine due to weight gain or accompanying metabolic effects was 2–8 times higher than other antipsychotics in the Clinical Antipsychotic Trials in Intervention Effectiveness (CATIE) trial (Lieberman et al., 2005). Besides being associated with decreased adherence with drug treatment, weight gain is also associated with substantial medical morbidity and mortality. Considering the high obesity rate in patients with schizophrenia (42%), the potential risk of olanzapine-induced weight gain should be evaluated carefully (Newcomer, 2006). Some randomized controlled trial (RCT) studies have found that patients with mental diseases die up to 30 years earlier than the general population (Das-Munshi et al., 2017). The leading cause of death in this population is heart disease. A major risk factor for heart disease and premature death in these patients is weight gain (Fekadu et al., 2015).

This study was conducted in the Mental Health Institute of the Second Xiangya Hospital, Central South University, China between December 2016 and April 2019. Participants were assessed for schizophrenia in accordance with criteria defined by the Diagnostic and Statistical Manual of Mental Disorders-Fifth Edition (DSM-5) (A.P. Association, 2013). As antipsychotic-naïve/first episode patients appear to gain more weight after olanzapine treatment (Correll et al., 2011), we included first-episode schizophrenia patients aged 18–50 years were included in this study.

The exclusion criteria included (i) clinically abnormal findings of physical examinations, laboratory tests, or electrocardiogram (ECG) results; (ii) disorders such as intellectual disability, substance or alcohol use disorder, a diagnosis of other specific systemic diseases according to DSM-5 criteria; (iii) cardiovascular and metabolic diseases such as diabetes mellitus, dyslipidemia, and hypertension; (iv) a history of eating disorders; (v) strict diet within the month before screening or during the study; and (vi) pregnancy or lactating.

Previous studies have suggested that the rate of olanzapine-induced weight gain was most rapid during the first 12 weeks of treatment (Correll et al., 2009). Therefore, participants were treated with olanzapine (15–20 mg/day at 8:00 p.m.) for 12 weeks. The initial dose of olanzapine was 5 mg/day and then adjusted to 15–20 mg/day in the first week.

Baseline assessments included demographics, a thorough medical history, anthropometric measurements (weight and height), appetite, physical examination, and lab analysis. Appetite was assessed daily, 30 min before lunch, with four standardized questions: Hungry, Felt full, Thinking about food, and Overeating. Responses were graded on a scale from 0 to 10, where 0 = “not at all” and 10 = “extremely”. Appetite increase was defined as a >10% increases in baseline appetite scores. Appetite decrease was defined as a >10% decreases in baseline appetite scores. The Positive and Negative Syndrome Scale (PANSS) was used to evaluate the severity of schizophrenia symptoms. Adverse effects were evaluated by Treatment Emergent Symptom Scale (TESS). At each follow-up visit, all baseline evaluations (including physical examination, anthropometric measurements, appetite, and TESS) were repeated except PANSS. PANSS was re-evaluated at week 12.

Prior to treatment and in the fasting state, weight and height were measured after participants removed shoes with light indoor clothing. Appetite was assessed before lunch and was based on the judgement of the rating physician on examination day. Lab work including plasma glucose, liver, and renal function were evaluated using enzymatic procedures with the Boehringer Mannheim/Hitachi 714 automated chemistry analyzer. Insulin was measured with a solid-phase enzyme-linked immunosorbent assays (ELISA).

The primary outcomes were the percentage of patients who had increased appetite and period of time between olanzapine treatment and increased appetite. Secondary outcomes included changes in weight, body mass index (BMI), fasting glucose, fasting insulin and insulin resistance index, lipid profiles which included triglycerides, cholesterol, high-density lipoprotein (HDL-C), and low-density lipoprotein (LDL-C), and PANSS score. BMI was calculated according to the criteria of the Working Group on Obesity in China: healthy weight (18.5 ≤ BMI <25 kg/m2), overweight (25 ≤ BMI ≤ 28 kg/m2), and obese (BMI > 28 kg/m2). Dyslipidemia was defined as cholesterol ≥ 5.18 mmolċl−1, triglycerides ≥ 1.70 mmolċl−1, HDL-C < 1.04 mmolċl−1, or LDL-C ≥ 3.37 mmolċl−1 based on the Chinese guidelines for dyslipidemia (Hu, 2017). An analysis of the proportion of patients who gained more than 7% of their baseline body weight after 12 weeks, which is the cutoff for clinically significant weight gain, was also included (Kanders et al., 1991). 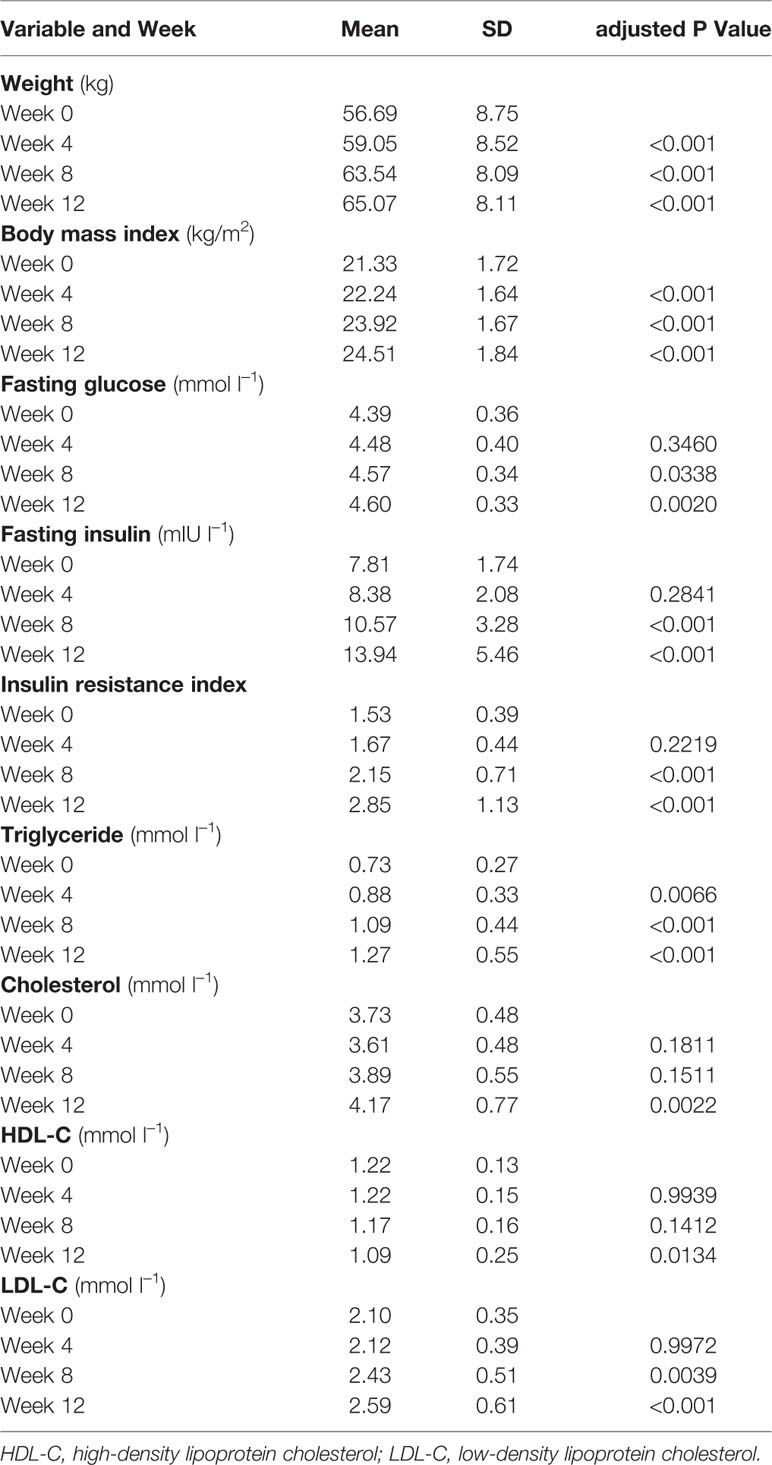 Table 1 Summary of weight and metabolic measures by study.

Changes of Body Weight and BMI After Olanzapine Treatment

Significant increases in fasting glucose, fasting insulin, insulin resistance index, triglyceride, cholesterol, and LDL-C and decreases in HDL-C were observed at 12 weeks (Table 1). No patient included in the study had dyslipidemia at baseline. Based on Chinese guidelines for dyslipidemia, 38.7% (12/31) of patients had dyslipidemia after 12 weeks of olanzapine treatment. 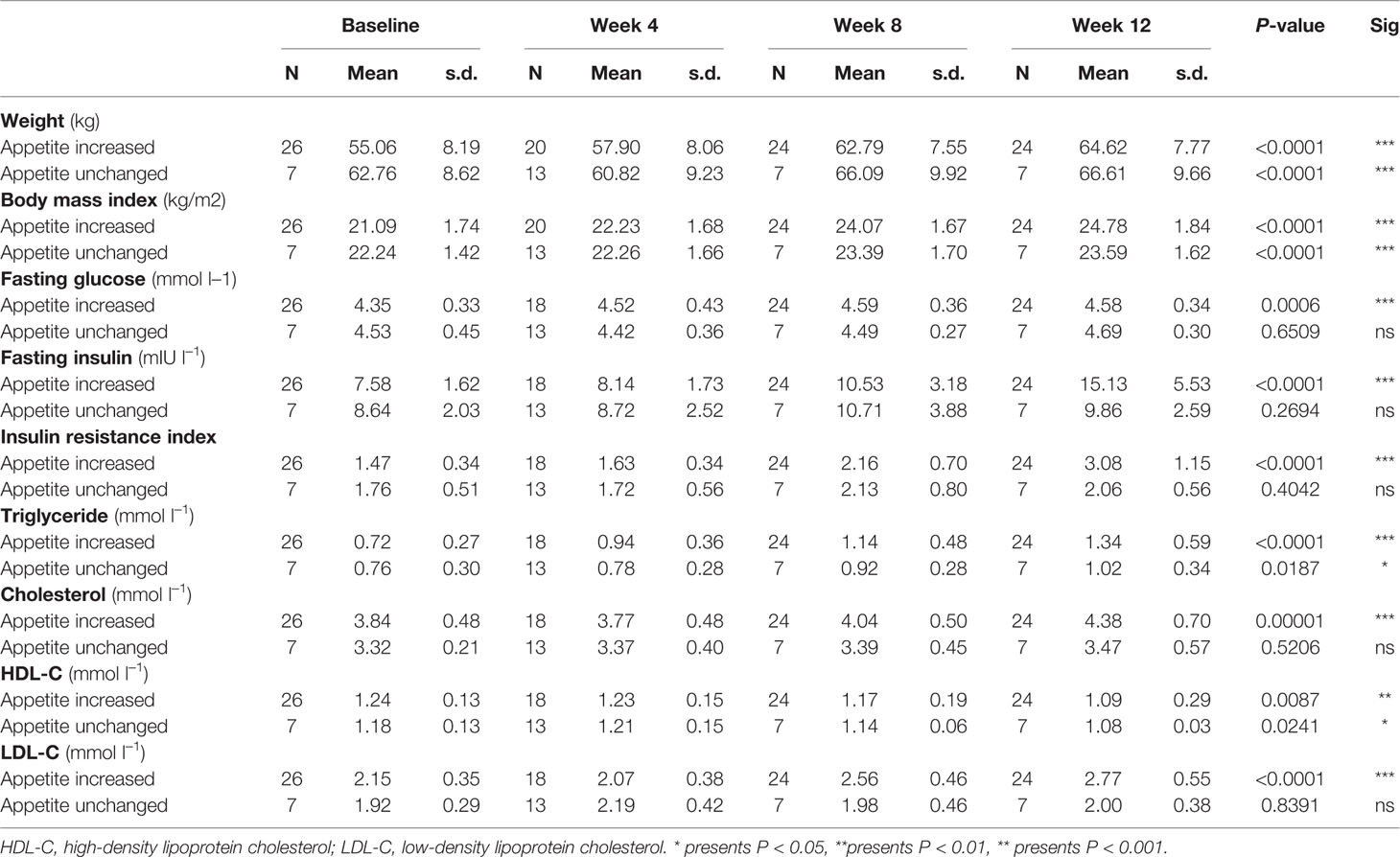 Table 2 Descriptive statistics of outcome measures between increased and unchanged appetite groups at baseline, and weeks 4, 8, and 12. 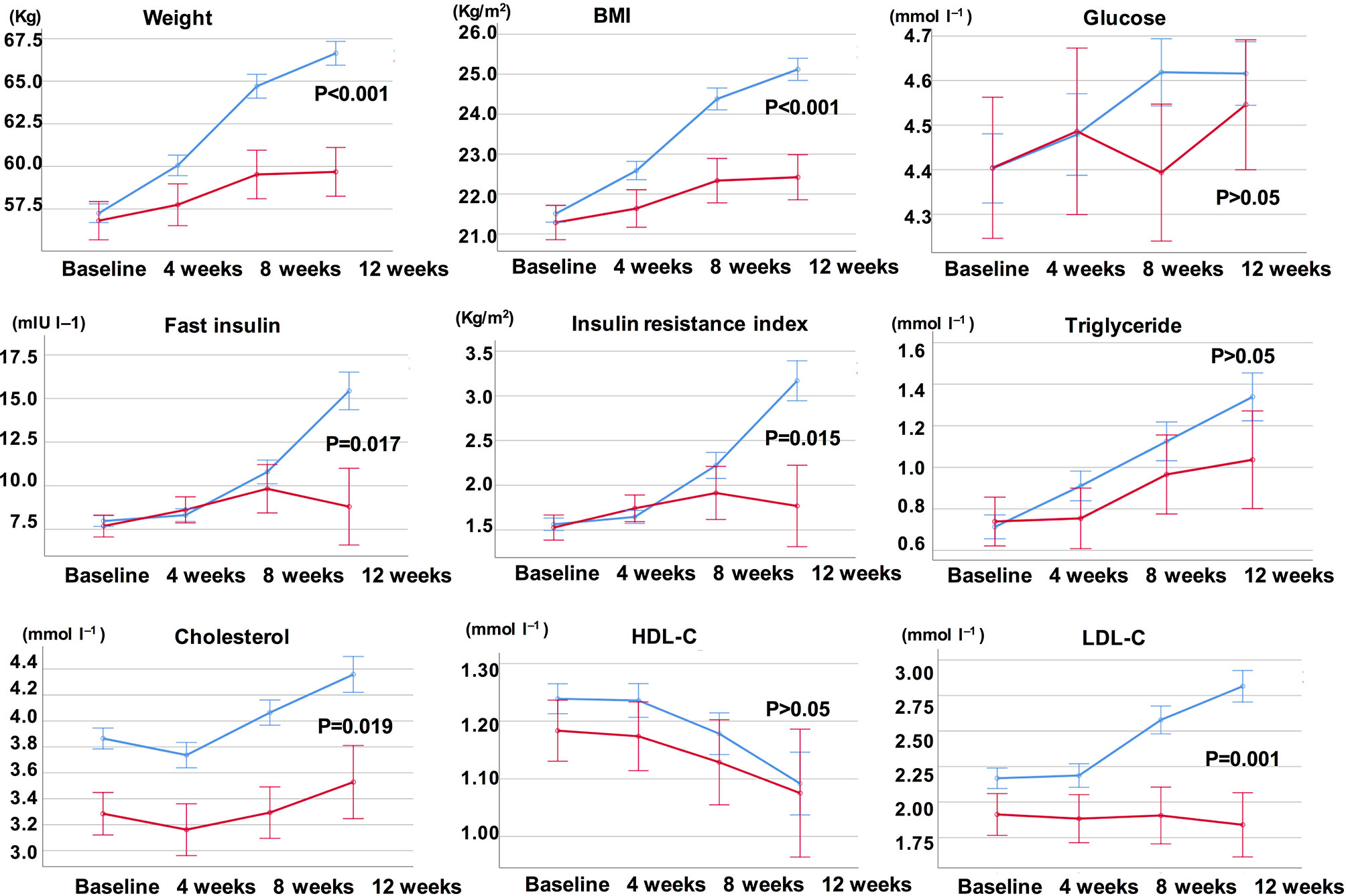 Significant baseline-to-end point improvements of clinical symptoms (evaluated by PANSS, p < 0.001) were observed after olanzapine treatment. No significant difference in PANSS was observed between the increased appetite and unchanged appetite groups (p > 0.05).

Olanzapine-treated patients exhibited an increase of more than 7% of initial body weight, which is consistent with previous findings (Gothelf et al., 2002; Wu et al., 2008). In addition to significant weight gain, patients with olanzapine treatment had significantly perturbed glucose and lipid metabolism after 12 weeks, which is consistent with previously published observations in patients with schizophrenia (Correll et al., 2011). Compared to patients in the unchanged appetite group, the increased appetite group had significant lipid abnormalities. Fasting glucose was not significantly different between the two groups. Participants with early increased appetite did not show increased velocity of insulin and insulin resistance index in the following months after increased appetite. It is possible that glucose levels are independent of weight gain, as appetite did not affect glucose levels.

In conclusion, our study has shown that appetite is related to olanzapine-induced weight gain and dyslipidemia in drug-naïve first-episode patients with schizophrenia. Assessing appetite changes is an easy and practical way for weight gain prediction, which provides clinicians more time and options for intervention strategies. Early dietary inventions aimed at decreasing appetite and reducing food intake can be helpful for weight control in schizophrenia patients treated with olanzapine.

This study was performed in accordance with the Declaration of Helsinki (G.A.o.t.W.M. Association, 2013), and approved by the Ethics Committee of the Second Xiangya Hospital, Central South University. After a complete description of the study to the participants, informed consent was obtained prior to study participation.

JH analyzed and interpreted the patient data and was a major contributor in writing the manuscript. G-RH mainly designed and performed the study. YeY, C-CL, J-MX, Y-JL, and X-JP helped in patient recruitment, monitor of the data quality, and document treatment emergent adverse events. YiY helped revised the manuscript. J-PZ guided the study design. RR-W was responsible for the overall content. All authors read and approved the final manuscript.

We would like to acknowledge the valued contribution of the participants and the support from their general practitioners. We also want to thank several anonymous reviewers for their valuable comments and suggestions to improve the quality of the paper.

The Supplementary Material for this article can be found online at: https://www.frontiersin.org/articles/10.3389/fphar.2020.00739/full#supplementary-material

Supplement Table 2 | Number of patients who had increased initial body weight by more than 7% or 10% at weeks 4, 8, and 12 in patients with increased appetite.

Supplement Table 3 | Number of patients who had increased initial body weight by more than 7% or 10% at weeks 4, 8, and 12 in patients with unchanged appetite.

Supplement Table 7-1 | The changes of weight, BMI, Insulin, IRI, and LDL-C per patient during the treatment period in different groups.

Copyright © 2020 Huang, Hei, Yang, Liu, Xiao, Long, Peng, Yang, Zhao and Wu. This is an open-access article distributed under the terms of the Creative Commons Attribution License (CC BY). The use, distribution or reproduction in other forums is permitted, provided the original author(s) and the copyright owner(s) are credited and that the original publication in this journal is cited, in accordance with accepted academic practice. No use, distribution or reproduction is permitted which does not comply with these terms.