In the Chinese Pharmacopoeia, C. morifolium flower is used for “scattering cold,” “cleaning heat and toxin,” and “brightening eyes,” and C. indicum flower is used to remove toxic heat (Chinese Pharmacopoeia Commission, 2020). Inflammation is the basic pathological changes of all these diseases. Inflammatory cytokines play an important role in the process, which is the interaction between pro-inflammatory cytokines like tumor necrosis factor-α (TNF-α), prostaglandin E2 (PGE2), interleukin (IL)-2, IL-6, IL-17, IL-23, and anti-inflammatory cytokines such as IL-4, IL-10, and IL-13 (Cheng et al., 2005). The dynamic change between pro-cytokines and anti-cytokines determines the ending and outcome of inflammation. Research on cytokines in inflammation especially in infective inflammation is meaningful as it may be the next breakthrough of a thorough cure in inflammatory disease (Gabay and Kushner, 1999; Kim et al., 2015). However, a comparative study of the anti-inflammatory activity of the two herbs remains to be investigated. 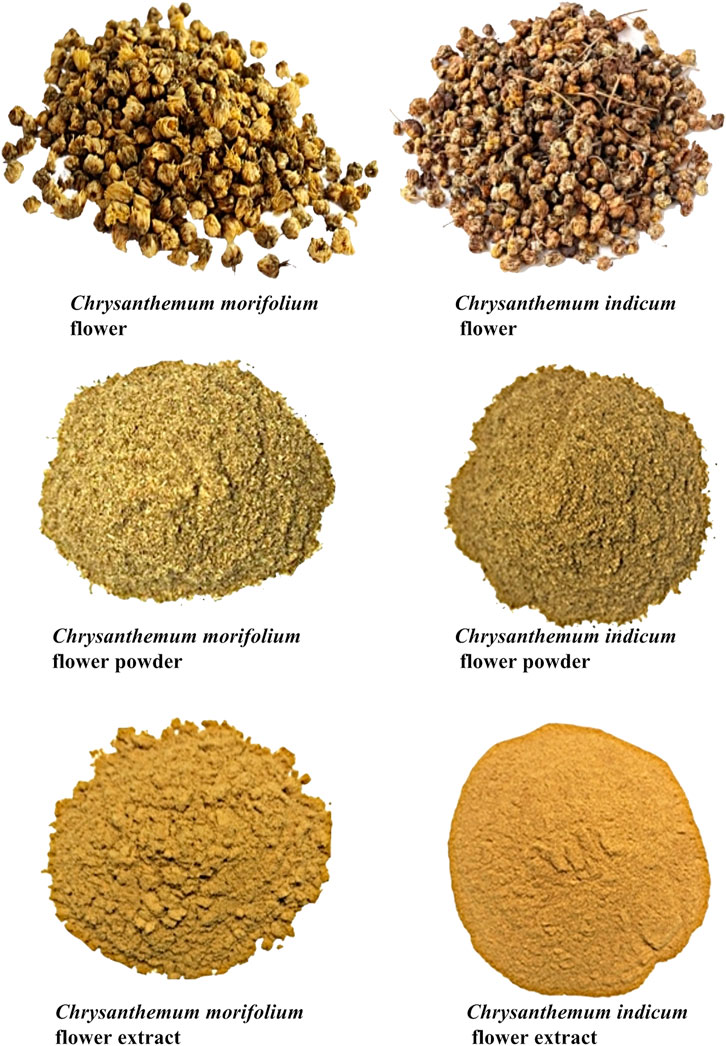 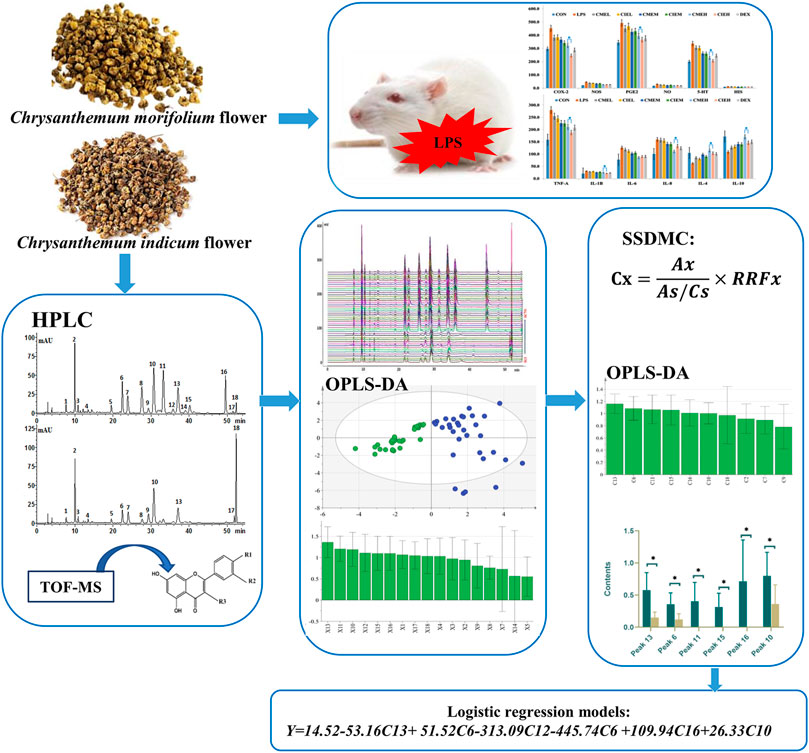 FIGURE 2. The graphic workflow of the paper.

As listed in Table 1, 37 samples of C. morifolium flowers were purchased from herb markets, including the two cultivars of “Gongju” (from Huangshan City, Anhui Provence) and “Hangbaiju” (from Tongxiang County, Zhejiang Provence), which were considered as the genuine medicinal materials. From different farms owned by Zhejiang Conba Pharmaceutical Co. Ltd., 16 samples of C. morifolium flower were also collected. In addition, 33 batches of C. indicum flower samples were collected from different provinces in China as summarized in a previous study (He et al., 2016). All of these samples were authenticated based on analyses of microscopic and macroscopic characteristics by Professor Jia Ying and deposited at the Centre of Chinese Material Medica at Shenyang Pharmaceutical University.

Five hundred milligrams of C. indicum flower (No. Y29)/250 g C morifolium flower (No. H5) powder was accurately weighed and transferred into a flask, followed by the addition of 25 ml of 60% methanol and sonication for 30 min. The supernatant was collected and filtered through a 0.22 μm membrane for qualitative and quantitative analysis.

Evaluation of the Anti-Inflammatory Activity In Vivo

Sprague Dawley (SD) rats (male, 16 weeks of age, 180–220 g) were provided by the Medical Experiment Animal Center of Shenyang Pharmaceutical University. They were housed under controlled temperature (23–25°C) and 12 h light/12 h dark cycle for a week before the experiment. Food and water were freely available. Experiments were conducted in accordance with the guidelines of the Guiding Principles for the Care and Use of Laboratory Animals approved by the Committee for Animal Experiments in Shenyang Pharmaceutical University.

For the experiment, rats were randomly assigned to nine groups (eight for each). CME (100, 200, and 400 mg/kg) and CIE (100, 200, and 400 mg/kg) were tube-fed for 7 days. The dose of linarin was selected based on previous report [20] and our preliminary study. The normal control, positive control group (DEX) and control group (LPS) were given equal amount of vehicle during this period. 0.5 h after final administration, all of the animals except for rats in normal control groups were injected intraperitoneally with 100 μg/kg LPS to induce acute inflammation. Rats in positive control group were injected with DEX (50 μg/kg) 0.5 h before LPS challenge. All of the animals were anesthetized with pentobarbital sodium and then the blood samples were collected from the abdominal aorta at 6 h after LPS injection. Blood samples were immediately centrifuged at 3,000 rpm for 10 min. Sera were collected, frozen, and kept at −80°C until analysis.

According to the HPLC test results for the reference compound mixture solutions obtained using the method described in Apparatus and Chromatographic Conditions, the relative response factor (RRFX) could be calculated using the ratio of the peak areas and the ratio of the concentration of the analyte and internal reference substance (Eq. 1) (Hou et al., 2014):

With the results of RRFx, the concentration of analyte (Cx) in the samples was calculated based on the following equation:

Validation of the Quantitative Analysis Method

Analytical method validation ensures the suitability and ruggedness of the method as a quality measure for use across multiple laboratories. The method developed for quantitative analysis of the major caffeoylquinic acids and flavone glycosides in C. morifolium flower and C. morifolium flower was validated by tests of linearity, limits of detection (LODs), limits of quantification (LOQs), accuracy, precision (intra- and inter-day variability), robustness and stability.

Gram-negative bacterial endotoxins or LPS, are associated with tissue injury and fatal outcome in septic shock (Girish, 2013). It has been demonstrated both experimentally and clinically that sepsis causes the production of a series of proinflammatory cytokines (IL-1β, TNF-α, IL-8, and IL-6), anti-inflammatory cytokines (IL-4 and IL-10), inflammatory mediums (NO, HIS, 5-HT, PGE2), and related enzymes (iNOS, COX-2), which determine the ending and outcome of inflammation (Gouwy et al., 2005; Chen et al., 2018; Dickson and Lehmann, 2019). 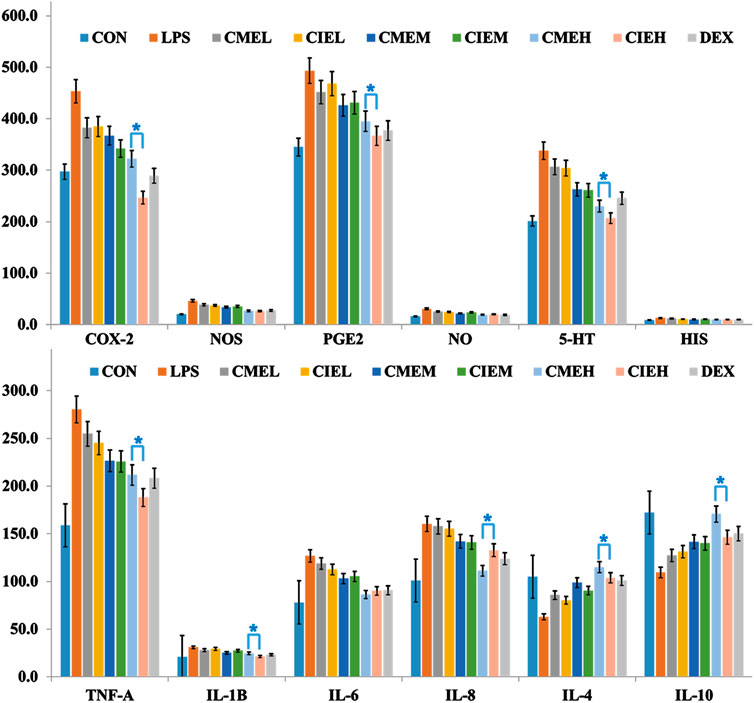 FIGURE 3. Anti-inflammation effect of C. morifolium flower extract (CME) and C. indicum flower extract (CIE) in lipopolysaccharide-induced rats. The data are expressed as the mean ± S.D. The significant difference between groups of CME and CIE with different dose was statistically evaluated, respectively, by the Student’s t-test (*p < 0.05). 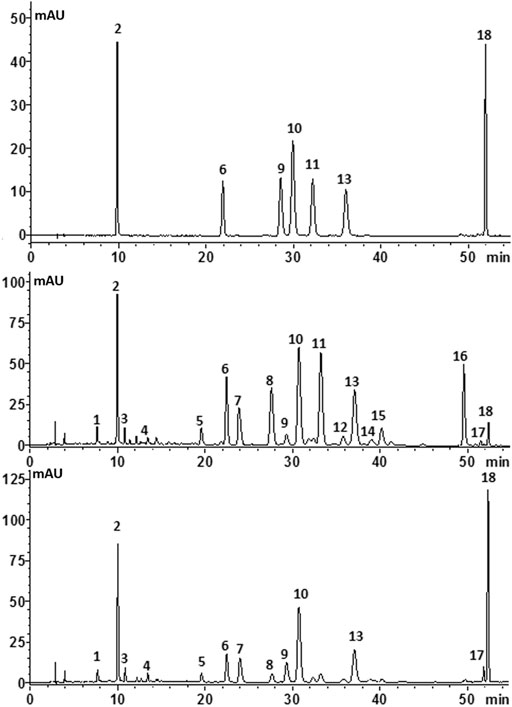 Based on HPLC-DAD and HPLC-ESI-QTOF-MS analysis, 14 detected peaks in C. morifolium and C. indicum flowers were identified or tentatively characterized using the chemical reference standards by comparing UV spectra, retention times, precursors and fragment ion (m/z) values. The UV spectrums and extracted ion chromatograms of CM and CI were shown in Supplementary Figures S1, S2 in Supporting Information. The structures and detailed MS data of the identified components were summarized in Table 2. Compounds 1, 2 and 3 yielded [M-H]− peaks at m/z 353.0876 (calculated for C16H18O9, 353.0873) and fragment ions at m/z 191.0559 due to the cleavage of the caffeoyl band, suggesting that monocaffeoylquinic acids were present. Compounds 9, 10, and 13 showed [M-H]− peaks at m/z 515.1645 (calculated for C25H24O12, 353.0873), which produced two successive neutral losses from caffeic acid that yielded two stable fragment ions at 353.0845 [M-H-C9H6O3]− and 191.0536 [M-H-2C9H6O3]−, suggesting that dicaffeoylquinic acids were also present. Compound 4 produced [M-H]− peaks at m/z 179.0351 (calculated for C9H8O4), which produced a stable ion fragment at 135.0451 [M-H-CO2]−, suggesting that this compound was caffeic acid. Then, the seven compounds numbered 1, 2, 3, 4, 9, 10, and 13 were unambiguously identified as neochlorogenic acid, chlorogenic acid, cryptochlorogenic acid, caffeic acid, isochlorogenic acid B, isochlorogenic acid A, and isochlorogenic acid C, respectively, based on comparison of the experimental retention times, UV spectra and MSn data with those of the standards. 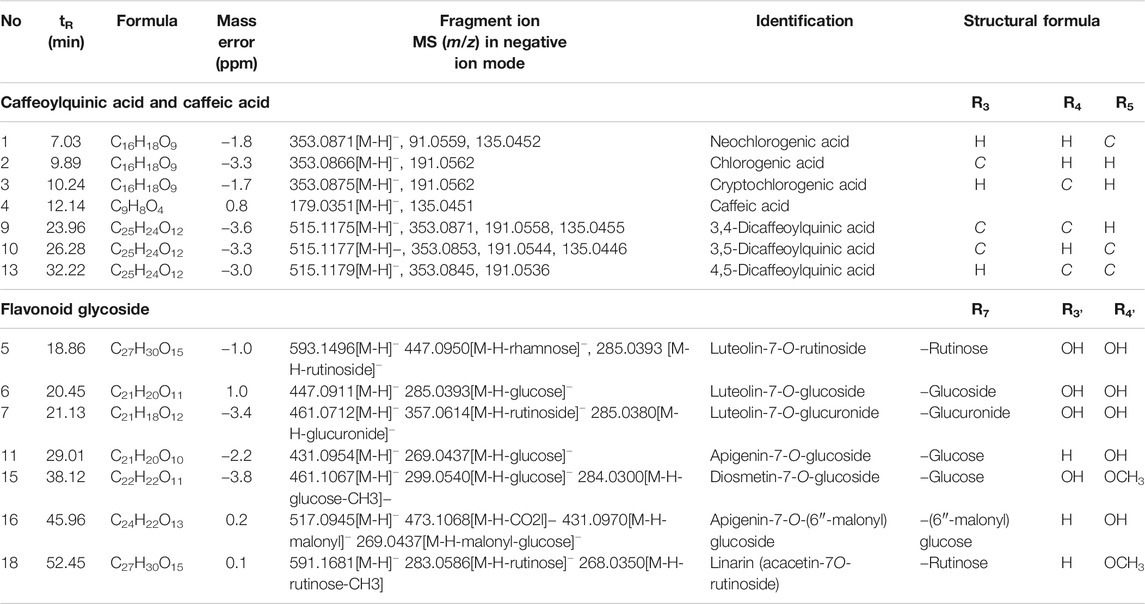 TABLE 2. Characterization of constituents by LC-MSn analysis in negative-ion modes.

Considering that all potential markers between C. morifolium and C. indicum flowers belong to caffeoylquinic acids (Peak 13, 10, 1, and4) or flavone glycosides (Peak 11, 15, 16, and 18), quantitative analysis was conducted for the two types of compounds in the tested samples by improved SSDMC and standard calibration methods.

The SDDMC method was mainly developed to simultaneously identify a group of compounds with similar polarity characteristics, UV spectra and chromatographic behaviors (Wang et al., 2015). In this work, chlorogenic acid and luteolin-7-O-glucoside, which were stable, accessible, and abundant in the samples, were selected as internal reference substances to determine the other three caffeoylquinic acids (isochlorogenic acid A, isochlorogenic acid B, and isochlorogenic acid C) and two flavone glycosides (apigenin-7-O-glucoside and linarin). Based on the series of standard solutions, the final RRF of each analyte was calculated using the average of several RRFs detected from the series of concentrations and calculated according to Eq. 1. The calculation of RRT was necessary to identify the peaks using only the internal standard for the SSDMC method. To develop an SSDMC method with general applicability, it was essential to evaluate the ruggedness of the RRT and RRF on different columns (different batches of Luna C18) and equipment. As summarized in Table 3, the RRFs for each analyte were quite similar at the detection wavelength of 327 nm across different HPLC instruments, indicating a good consistency of the RRFs. The RRT for each analyte was stable with the RSDs, with deviations of less than 2.0%, and was found to be suitable for use in the identification.

TABLE 3. Ruggedness of the RRT and RRF of marker components in C. morifolium/C. indicum flower, n = 7.

In addition, previous studies showed that the RRFs of flavones presenting the same or similar skeletons and different substituent groups were correlated with molecular weights (Cui et al., 2016). Due to a lack of reference standards, the RRFs of the three flavone glycosides luteolin-7-O-glucuronide, diosmetin-7-O-glucoside and apigenin-7-O-6″- malonylglucoside were calculated based on analytes with highly similar molar absorptivities and molecular weights. For example, the structures of luteolin-7-O- glucuronide (Mr = 462.3) and diosmetin-7-O-glucoside (Mr = 462.3) were similar to that of luteolin-7-O-glucoside (Mr = 448.3). Thus, the RRFs of the two analytes were both obtained as 1.03 (RRF = 462.3/448.3 × 1.00). The RRF of apigenin-7-O-6″- malonylglucoside (Mr = 518.1), which possessed a structure similar to that of apigenin-7-O-glucoside (Mr = 432.8), was determined to be 0.91 (RRF = 518.1/432.8 × 0.76). Though the results of the three RRFs may deviate from the true value and are only an approximation, the method was validated as an effective alternative for the quality control of C. morifolium flower and C. indicum flower when lacking of the sufficient chemical standard substances.

Validation of the Quantitative Analysis Method

For the ESM method, all of the reference standards solutions related to the analytes to be examined should be prepared first. In contrast, only the internal reference solutions were needed for the SSDMC method. The results calculated via the SSDMC method in this experiment were compared to the results obtained with ESM (shown in Supplementary Tables S1–S8).

Repeatability was assessed by examining three replicate solutions prepared at three different concentrations (high, medium and low). The RSD values for the seven components in samples (H5, Y29) were less than 5.4%. The precision of the method was analyzed by using different operators and performing the analysis on different days, equipment and columns. The RSD values were found to be in the range of 1.2–4.2% (in S3–S7 in Supporting Information). The results showed no remarkable differences between the precision of the two methods, SSDMC and ESM, according to the F-test (p = 0.113 > 0.05).

The method accuracy was determined using a recovery test by assaying the known added amount of analyte in the sample at three concentration levels (75, 100, and 125%). Three replicates of each concentration in samples (H5, Y29) were examined. Recoveries were in the range 95.0–102.0% with RSDs less than 3.2% for the seven analytes in the samples (H5, Y29) (shown in S8-S9 in Supporting Information). The recoveries between the ESM and SSDMC methods showed no remarkable differences using the paired t-test (p = 0.174 > 0.05).

Based on the quantitative results, Student’s t-test and OPLS-DA (R2X 0.822, R2Y 0.764, Q2 0.715) were used to further screen out markers for differentiating C. morifolium flower and C. indicum flower. Combined VIP value and p value, peaks 13, 16, 11, 15, 16 and 10 were identified as the markers, whose contents were shown as Figure 6. Then to effectively distinguish the two hers from the same genus, a binary logistic regression equation was established as Y = 14.52 − 53.16C13 + 51.52 C6 − 313.09C11 − 445.74 C6 + 109.94C16 + 26.33C10 (Cx represents the content of peak x). When the contents of the six markers were substituted into the equation, the sample was determined as C. morifolium flower if the result was negative and on the contrary for C. indicum flower. The established method was tested with multiple batches of samples collected from different regions, and the accuracy ratewas 100%, which proved the robust of the model.

The raw data supporting the conclusion of this article will be made available by the authors, without undue reservation, to any qualified researcher.

The Supplementary Material for this article can be found online at: https://www.frontiersin.org/articles/10.3389/fphar.2021.575726/full#supplementary-material.

Copyright © 2021 He, Zhang, Ma, Giancaspro, Bi and Li. This is an open-access article distributed under the terms of the Creative Commons Attribution License (CC BY). The use, distribution or reproduction in other forums is permitted, provided the original author(s) and the copyright owner(s) are credited and that the original publication in this journal is cited, in accordance with accepted academic practice. No use, distribution or reproduction is permitted which does not comply with these terms.