Purpose: To determine the incidence and risk factors of bleeding events as well as assess the performance of the PRECISE-DAPT score in elderly patients (≥75 years) who underwent percutaneous coronary intervention (PCI) and one-year dual antiplatelet therapy (DAPT).

Methods: A total of 940 patients (≥75 years) who received PCI and one-year DAPT were retrospectively enrolled into the study. The multivariable logistic regression analysis was conducted to identify risk factors of antiplatelet-related bleeding complications. The receiver operating characteristic (ROC) curve analysis and the Delong test were performed to obtain the optimized PRECISE-DAPT score.

Conclusion: A higher PRECISE-DAPT score of 33 might be a more reasonable cutoff value for predicting BARC ≥2 type bleeding risk in CAD patients (≥75 years). In addition, the history of hemorrhagic stroke, peptic ulcer, and myocardial infarction were identified as the risk factors of BARC ≥2 type bleeding events.

Age is a risk factor for coronary artery diseases (CADs) (Shanmugam et al., 2015). Thus, an increasing number of the elderly population (aged ≥75 years) usually develop CAD, wherein percutaneous coronary intervention (PCI) is considered as the definitive treatment option. Dual antiplatelet therapy (DAPT), consisting of aspirin with a P2Y12 receptor inhibitor (mainly clopidogrel and ticagrelor in participating centers), is an essential treatment regimen in patients undergoing PCI with decreased risks of ischemic complications but increased risks of bleeding, wherein the condition can sometimes be fatal and culminate in adverse clinical events (Wang et al., 2011; Levine et al., 2016; Tammam et al., 2017; Palmerini et al., 2017a; Xu et al., 2018). Elderly patients are a special group in CAD studies since they present with extensive atherosclerosis, complex lesions, comorbidities, and increased incidences of both thrombosis and bleeding (Wang et al., 2011; Shanmugam et al., 2015; Arahata and Asakura, 2018). Nevertheless, an existing evidence showed that the elderly remained as an underrepresented group in clinical trials (Dodd et al., 2011). Bleeding risk is regarded as an important limiting factor that affects patient’s decision for the antithrombotic strategies (Almendro-Delia et al., 2017), and thus, existing guidelines recommend careful consideration for complications of bleeding risk during DAPT (Valgimigli et al., 2017; Kedhi et al., 2018; Mazlan-Kepli et al., 2019). Besides, a careful assessment of bleeding risk may change the prognosis of the patients. Several bleeding risk scores, namely, CRUSADE, ACUITY, and PRECISE-DAPT scores, have been proposed albeit having a lower representation of the elderly patients. Notwithstanding, the PRECISE-DAPT score is recommended (by the European Society of Cardiology guidelines) as a guide for the length of DAPT (Subherwal et al., 2009; Mehran et al., 2010; Ariza-Solé et al., 2014; Faustino et al., 2014; Valgimigli et al., 2017; Choi et al., 2018). The PRECISE-DAPT score is a simple tool that was developed with five items (age, creatinine clearance, hemoglobin, white blood cell count, and previous spontaneous bleeding). Importantly, it can be applied in daily clinical practice to assess bleeding risks during the initiation of treatment (Costa et al., 2017). Current guidelines suggest a relative conservative antiplatelet approach in patients with the PRECISE-DAPT score above the recommended 25 cutoff value (Valgimigli et al., 2017). However, only few studies have assessed the predictive ability of the PRECISE-DAPT score in CAD patients (≥75 years). In this study, we investigated the clinical factors of the Bleeding Academic Research Consortium (BARC, type ≥2) bleeding events in elderly patients (≥75 years) who received coronary stenting and one-year DAPT. Also, the performance of the PRECISE-DAPT score to predict bleeding complications in patients (≥75 years) was evaluated.

Of note, this article has been presented in accordance with the STROBE reporting checklist.

This was a multicenter, retrospective study conducted among CAD patients (≥75 years) who received DAPT after PCI, with implantation of drug-eluting stents (DESs) from three hospitals (viz., the first affiliated hospital with Nanjing Medical University, the first affiliated hospital of Soochow University, and affiliated hospital of Yangzhou University), regardless of being presented with acute coronary syndromes or chronic coronary syndromes (from September 2016 to June 2018). All the CAD patients who met the inclusion criteria were retrospectively selected from the medical electronic database at the three centers. The criteria were as follows: 1) age equal to or older than 75 years, 2) patients who received PCI treatment between September 2016 and June 2018, and 3) all the patients received one-year DAPT therapy, except for some of them changed to single antiplatelet therapy (SAPT) treatment due to bleeding complications. In addition, patients were excluded due to the following reasons: 1) contraindications to DAPT, namely, active bleeding, peptic ulcer, or allergic to one or more antiplatelet drugs; 2) bleeding complications that were not caused by antiplatelet therapy, such as trauma; 3) hematological disorders; 4) complications of serious diseases like malignant tumor with less than 1-year life expectancy; and 5) incomplete follow-up data due to loss of contact. Furthermore, patients with a history of PCI intervention or coronary artery bypass surgery within 1 year before enrollment were also excluded in order to rule out a possible increased bleeding risk associated with prolonged DAPT. The study protocol was conducted in accordance with the Declaration of Helsinki and was approved by the institutional ethics committee of each participating center (No. 2020-SR-472). Informed consent of the participants was waived in the study and approved by our ethical committee.

The clinical and laboratory variables at the time of index PCI for the analysis were collected retrospectively from the hospital medical electronic database. The clinical parameters included demographics, risk factors and previous histories, clinical presentations, laboratory examinations, angiographic and procedural characteristics, PRECISE-DAPT score, and discharge medication information. All patients who met the inclusion criteria were called (at least 1 year) after admission for the PCI in order to obtain the end point information. End point events referred to those bleeding complications that happened at any time between the starting of the DAPT regimen and the end of the 1-year follow-up time. Furthermore, the bleeding outcomes were further confirmed in some of the patients by checking their outpatient visit record or reviewing their related medical electronic record. The creatinine clearance rate (cCr) was calculated using Cockcroft–Gault equation. The PRECISE-DAPT score was calculated for all the patients through the web calculator (http://www.precisedaptscore.com/predapt/).

Continuous variables were presented as mean ± SD for normally distributed variables or median with IQR (interquartile range) (Q1–Q3) for non-normally distributed variables, while categorical variables were expressed as frequencies (percentages). Continuous variables were compared using the one-way ANOVA or Kruskal–Wallis H test, while the Pearson χ2 or Fisher exact test was used to compare categorical parameters. The incidence of bleeding events was calculated by dividing the number of patients who had bleeding events with the total number of patients in the subgroup. Since advanced age may push the PRECISE-DAPT score toward right, we stratified the PRECISE-DAPT score into tertiles to see if a higher score may relate to a higher incidence of bleeding events because the current recommended cutoff value of 25 might be too low for elderly patients in clinical practice. Furthermore, the optimal cutoff value of the PRECISE-DAPT score for the elderly patients was obtained through the receiver operating characteristic (ROC) curve analysis. In order to compare the predictive ability of bleeding events between the newly proposed PRECISE-DAPT cutoff score of 33 and the current recommended score of 25 in elderly patients, two cutoff values were, respectively, calculated for ROC curves and Brier scores. Meanwhile, the Delong test was used to determine the difference between two areas under the curves (AUCs) of ROC curves. Variables that were statistically significant in the univariate analysis were further analyzed in the multivariate logistic regression analysis. The univariate and multivariable binomial logistic regression analyses were performed to determine the clinical risk factors of bleeding events, and the results were expressed as the odds ratios (ORs) with corresponding 95% confidence intervals (CIs). All statistical analyses were performed using SPSS23.0 software or R language software, where appropriate. A two-sided p‐value of <0.05 was considered statistically significant. 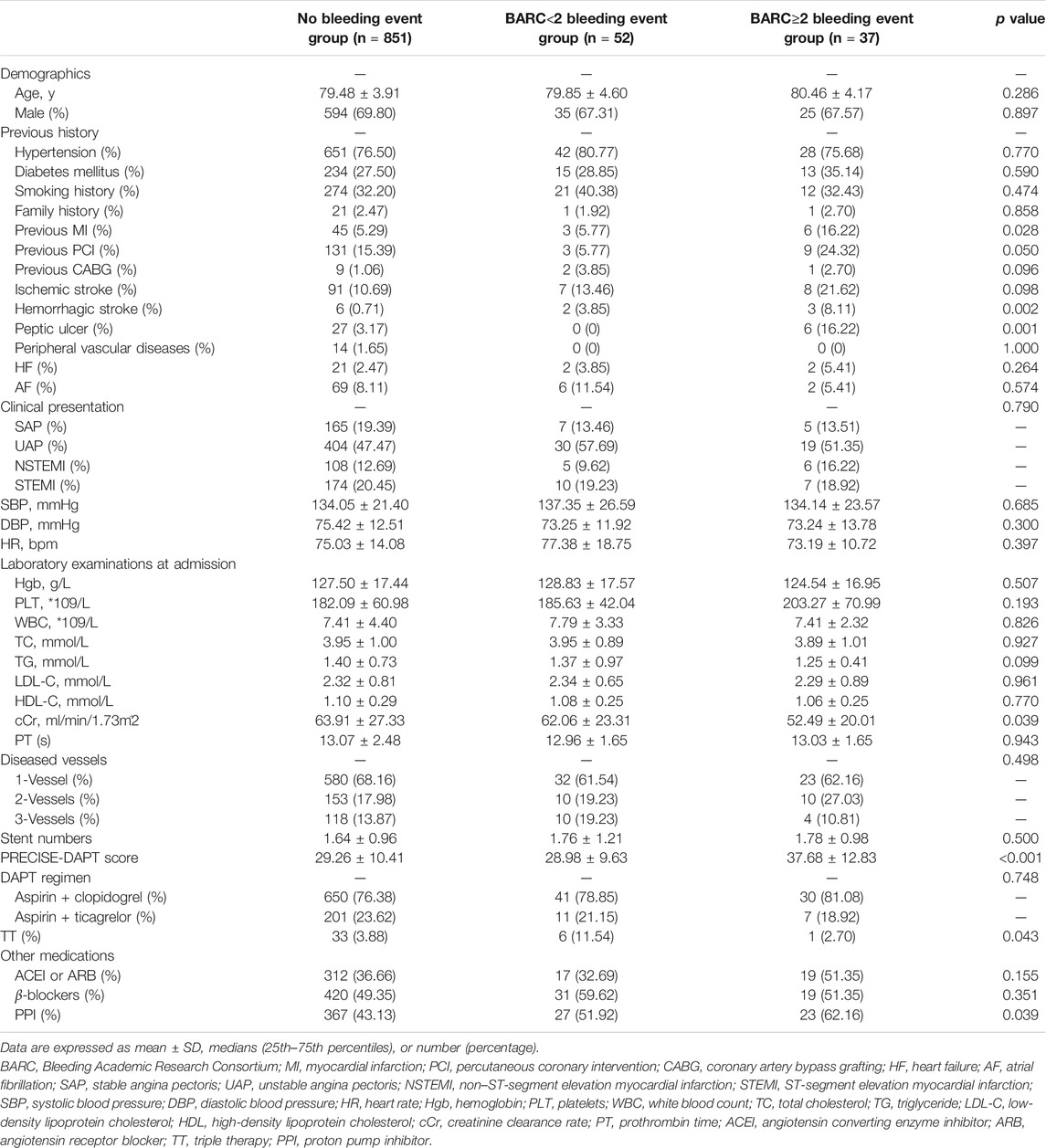 TABLE 1. Baseline characteristics of patients with or without bleeding events. 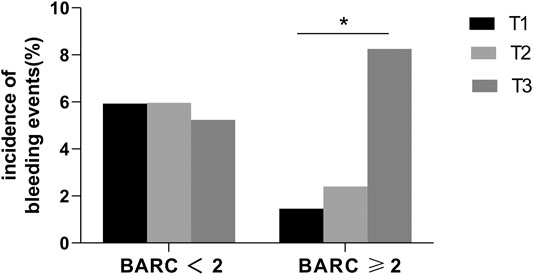 In this retrospective study of patients (aged ≥75 years) who were treated with DAPT following PCI, two main findings were revealed (Shanmugam et al., 2015): the PRECISE-DAPT is an effective score system which can predict one-year bleeding events in elderly patients over 75 years. However, a higher score of 33, rather than the recommended 25, might be a more reasonable cutoff value for the PRECSE-DAPT score to diagnose BARC ≥2 type bleeding complications in elderly patients (Wang et al., 2011). The history of hemorrhagic stroke, peptic ulcer, and MI were the predominant risk factors associated with BARC ≥2 type bleeding complications in CAD patients (aged ≥75 years) who received PCI and one-year DAPT.

Severe bleeding complications may result in an increased mortality, cessation of antiplatelet drugs, and potential ischemic events, especially in the elderly patients (Lopes et al., 2012; Ndrepepa et al., 2014; Palmerini et al., 2017b). Numerous data have indicated that Asians displayed a higher bleeding risk than the western natives (Levine et al., 2014). Therefore, it is important for us to identify risk factors of bleeding and perform accurate risk stratification. Our regression analysis confirmed that the PRECISE-DAPT score system was efficient for predicting BARC ≥2 type bleeding events in elderly patients with an optimized cutoff score. In addition, it was further observed in this study that the history of hemorrhagic stroke, peptic ulcer, and MI were the main risk factors to predict BARC ≥2 type bleeding complications in CAD patients (≥75 years) and those undergoing one-year DAPT following PCI. As elderly patients with a history of bleeding or MI had a higher risk of BARC ≥2 type bleeding, it is therefore important to tailor the DAPT regimen for patients (≥75 years) undergoing PCI. The usage of PPI was supposed to have a protective role to reduce the gastrointestinal bleeding risk in CAD patients who received antiplatelet treatment (Khan et al., 2019); however, no association was found between the use of PPI and the reduction of BARC ≥2 type bleeding events in elderly patients in our study. The reasons may be due to the irregular usage of PPIs in the clinics and the limited number of patients enrolled in our study. Therefore, more studies are needed to investigate the correlation between PPI use and the reduction of bleeding risk so as to guide the rational for using PPI in clinical practice.

Several limitations in our study should be considered. First, this is a retrospective study with a relatively small sample size and a lower incidence of bleeding complications in comparison with other studies. Second, bleeding events were reported by patients, which may lead to some inaccuracy and bias. Third, although we analyzed a number of possible risk factors, some other predisposing factors such as frailty, malignant tumor, and revascularization procedure were not assessed in our study.

The studies involving human participants were reviewed and approved by the Ethics Committee of the First Affiliated Hospital of Nanjing Medical University. The ethics committee waived the requirement of written informed consent for participation.

We thank Yuxiang Wang (George) from the Departments of cardiovascular medicine, Mayo Clinic Arizona, for his critical revision of the English language and grammar of the manuscript.

The Supplementary Material for this article can be found online at: https://www.frontiersin.org/articles/10.3389/fphar.2021.661619/full#supplementary-material

Copyright © 2021 Qian, Xu, Qian, Cao, Cheng, Liu, Bai, Han and Wang. This is an open-access article distributed under the terms of the Creative Commons Attribution License (CC BY). The use, distribution or reproduction in other forums is permitted, provided the original author(s) and the copyright owner(s) are credited and that the original publication in this journal is cited, in accordance with accepted academic practice. No use, distribution or reproduction is permitted which does not comply with these terms.