Background: Patients with treatment-resistant schizophrenia (TRS) and non-treatment-resistant schizophrenia (NTRS) respond to antipsychotic drugs differently. Previous studies demonstrated that patients with TRS or NTRS exhibited abnormal neural activity in different brain regions. Accordingly, in the present study, we tested the hypothesis that a regional homogeneity (ReHo) approach could be used to distinguish between patients with TRS and NTRS.

Results: ANCOVA analysis revealed widespread differences in ReHo among the three groups in the occipital, frontal, temporal, and parietal lobes. ROC results indicated that the optimal sensitivity and specificity of the ReHo values in the left postcentral gyrus, left inferior frontal gyrus/triangular part, and right fusiform could differentiate TRS from NTRS, TRS from HCs, and NTRS from HCs were 94.12 and 82.35%, 100 and 86.21%, and 82.35 and 93.10%, respectively. No correlation was found between abnormal ReHo and clinical symptoms in patients with TRS or NTRS.

Conclusions: TRS and NTRS shared most brain regions with abnormal neural activity. Abnormal ReHo values in certain brain regions might be applied to differentiate TRS from NTRS, TRS from HC, and NTRS from HC with high sensitivity and specificity.

Schizophrenia, a group of diseases with a worldwide prevalence of approximately 0.3–0.7%, is characterized by positive symptoms, negative symptoms, and cognitive dysfunction. Etiology and treatment of schizophrenia remain a challenge for clinicians (1). Antipsychotic drugs are commonly used as treatment for schizophrenia. However, approximately 10–30% of patients with schizophrenia do not respond to antipsychotic drugs (2). Treatment-resistant schizophrenia (TRS) is characterized by the lack of response to two kinds of antipsychotics at doses ≥ 400 mg/day equivalents of chlorpromazine for a minimum period of 4–6 weeks, and with continuing moderate to severe psychopathology (especially positive symptoms) (3). TRS has been regarded as a severe and homogenous subgroup of schizophrenia that presents specific biological markers (4).

Evidence indicates that schizophrenia is a type of brain dysfunction measured by a functional connectivity (FC) method (5, 6). Moreover, FC differences exist between TRS and non-treatment-resistant schizophrenia (NTRS)/healthy controls (HCs) (7). Ganella et al. observed a decreased global efficiency but increased local efficiency in TRS compared with NTRS, mainly involving the fronto-temporal, temporo-occipital, and fronto-occipital connections (8). Dysconnectivities between cerebellar and prefrontal nodes were observed in TRS relative to NTRS (9). However, few studies have examined regional activity, which could be applied to differentiate TRS from NTRS. Furthermore, abnormal FC can be applied to distinguish TRS from NTRS/HCs with inconsistent results as regards concrete brain regions (8–12). Such inconsistency may be attributed to different sample sizes, scanners, analysis methods, and medications. However, markers to identify TRS from NTRS in advance remain lacking (13). Therefore, exploring some potential markers to identify TRS from NTRS is important. Improving understanding of the neurobiology of TRS would also be helpful in developing effective treatments for TRS.

In the present study, we examine abnormal regional activity, measured by a regional homogeneity (ReHo) method, in 17 patients with TRS, 17 patients with NTRS, and 29 HCs. Designed to explore the local consistency of brain activities, ReHo can reflect the similarity or synchronization of the time series of nearest neighboring voxels, usually 26 voxels (14). ReHo is based on the assumption that a voxel is temporally similar to those of its neighbors (15). Using this method, Wang et al. (16) revealed that dysfunction in the resting state of the brain in patients with TRS is mainly distributed in the prefrontal cortex. In this study, we hypothesized that abnormal neural activities in different brain regions of patients with TRS may constitute a potential biomarker to distinguish TRS from NRTS and/or HCs. Accordingly, ReHo was used to detect the local abnormality in the resting-state regional neural activities of patients with TRS or NTRS. Furthermore, receiver operating characteristic (ROC) curves were applied to explore the optimal sensitivity and specificity of abnormal ReHo values to differentiate TRS from NTRS or HCs.

Seventeen right-handed patients with NTRS were initially recruited from the same hospital at the same time. The diagnosis and exclusion criteria of NTRS were similar to those of TRS. Patients had a PANSS total score of < 60. The current social function of these patients was comparatively well. Patients with a reduction rate of more than 50% in PANSS total scores after 6 weeks of antipsychotic treatment were also included.

Twenty-nine right-handed HCs were recruited from the community through an advertisement. The HCs were screened using the Structured Clinical Interview for DSM-IV, non-patient edition. None of the HCs had serious medical or neuropsychiatric illnesses, and their first-degree relatives had no major psychiatric or neurological illnesses. The controls were matched with the two patient groups in relation to age, sex and years of education.

Participants were informed about the study procedures. Written informed consent was obtained from all participants and their legal guardians. The study was approved by the local Ethics Committee of the Affiliated Nanjing Brain Hospital, Nanjing Medical University (No. KY44, 2011).

Regional homogeneity analysis was performed with an in-house REST software. Individual ReHo maps were generated by calculating the Kendall's coefficient of concordance (KCC) of the time series of a given voxel with those of its nearest neighbors (26 voxels) in a voxel-wise analysis. The formula for calculating the KCC value has been expounded in a previous study (14). To reduce the influence of individual variations in the KCC value, the ReHo maps were normalized by dividing the KCC of each voxel by the averaged KCC of the entire brain. Then the averaged ReHo maps were smoothed with a Gaussian kernel of 4 mm full-width at half-maximum.

Voxel-based comparisons of the whole-brain ReHo maps with ANCOVA were conducted in REST. Age and years of education were used as covariates to avoid any undetected age and education effects, although age and years of education were not significantly different across the three groups. Post-hoc t-tests were performed to identify variations across groups. Moreover, illness duration was also used as a covariate in the post-hoc t-test between the TRS and NTRS groups to minimize any potential influence of this variable. The resulting statistical map was set at p < 0.05 corrected via Gaussian random field theory (voxel significance: p < 0.001, cluster significance: p < 0.05).

ROC curves were utilized to prove the possibility that brain regions with abnormal ReHo can be used as potential biomarkers to differentiate between patients with TRS and NTRS or HCs. The ROC curve, created by plotting sensitivity and specificity for different cut-off points of a parameter, was a primary tool for evaluation of diagnostic tests. Each point on the ROC curve represents a sensitivity/specificity pair. ROC curves were drawn and area under the curve (AUC) was measured by the Statistical Package for Social Science version 24.0 (SPSS 24.0).

Brain regions showing significant differences across groups were identified as regions of interest from which the mean ReHo values were extracted. For both patient groups, further correlation analyses were conducted group between abnormal ReHo values and PANSS total scores, negative scores, positive scores, and general scores after the normality of the data being assessed. The significance level was set at p < 0.05 (Bonferroni corrected).

The three groups did not differ significantly as regards to age, sex, and years of education (Table 1). However, the TRS group had earlier onset and longer illness duration, higher PANSS scores, and chlorpromazine equivalent doses (Table S1) than the NTRS group. 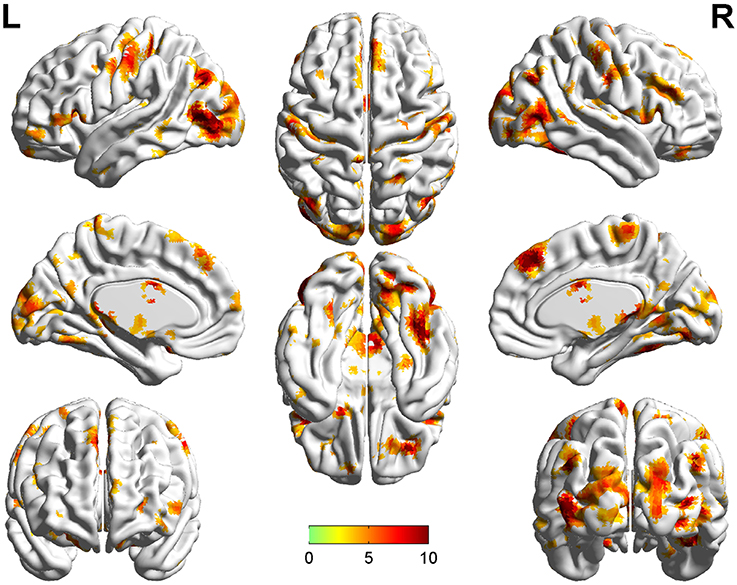 Correlations Between ReHo Values and PANSS Scores in Patients

The correlations between abnormal ReHo and clinical variables in the patients were examined. No correlations were observed between the ReHo values and PANSS scores in patients with TRS or NTRS.

In this study, the differences between TRS and NTRS occurred mainly in the parietal lobe. By contrast, the differences between TRS and HCs are widespread in the frontal, temporal, occipital and parietal lobes, while abnormal ReHo values were found in the temporal, occipital, and parietal lobes in patients with NTRS relative to HCs. Furthermore, abnormal ReHo values in the left postcentral gyrus, left inferior frontal gyrus/triangular part and right fusiform gyrus can distinguish TRS from NTRS, TRS from HC, and NTRS from HCs, respectively.

ReHo assumes that voxels within a functional brain area are more temporally homogeneous when this area is involved in a specific condition. Thus, it reflects local functional connectivity or synchronization. Increased ReHo values in patients suggest that neural function in certain regions is relatively synchronized compared with HCs (19). Nevertheless, the exact biological mechanism of an abnormal ReHo value remains unclear.

Increased ReHo in the left inferior frontal gyrus/triangular part, which belongs to the language network and is associated with sematic processing (31), may be a potential marker to identify patients with TRS from HCs. Chyzhyk et al. and Renaud Jardri et al. (32, 33) confirmed the importance of the left inferior gyrus/triangular part for the auditory hallucination model of schizophrenia. Kubera et al. (34) detected a reduction of GM volume in the inferior frontal gyrus between schizophrenia patients who have frequent auditory verbal hallucinations and HCs. Interestingly, Jeong et al. (31) revealed a decreased activation in the inferior frontal gyrus in patients with NTRS, whereas Wolf et al. (35) and Fitzgerald et al. (36) found increased regional cerebral blood flow (rCBF) and increased brain activation in the left inferior frontal gyrus in patients with TRS. Furthermore, abnormality in this area may be associated with DISC1 in the patients, indicating enhanced heredity in TRS (30). The present findings, together with those of previous studies, imply that TRS may be regarded as a distinct subgroup of schizophrenia.

Compared with HCs, patients with TRS showed higher ReHo values in the prefrontal cortical region, including the right middle frontal gyrus/orbital part and bilateral superior medial frontal gyrus. Decreased metabolic rate (39), decreased glutamate-glutamine to creatinine ratio (40) in the dorsolateral prefrontal cortex, and increased FC between the dorsomedial prefrontal cortex and the central opercular cortex (12) were found in patients with TRS compared with individuals with NTRS. Previously, increased ReHo values in the left medial superior frontal gyrus were negatively correlated with the patients' Characteristic of Delusion Rating Score scores but not with their delusional PANSS scores (41). These findings suggested that altered local synchronization of spontaneous brain activity may be related to the pathophysiology of delusion in schizophrenia (41).

In addition to the small sample size, our study has the following limitations. First, the effects of antipsychotic drugs should not be ignored. According to prior studies, increased regional activity and FC in the frontal gyrus, parietal lobule, temporal gyrus and striatum were observed after antipsychotic treatment (42–44). Therefore, the present results may be biased by the effects of antipsychotic drugs. Second, a longitudinal study can help us dynamically observe the changes of the ReHo values with antipsychotic drug treatment. Despite these limitations, TRS and NTRS shared the majority of brain regions with abnormal neural activity. Thus, abnormal ReHo values in certain brain regions might be applied to distinguish TRS from NTRS, TRS from HC, and NTRS from HC with optimal sensitivity and specificity.

This study was supported by grants from the National Key R&D Program of China (2016YFC1306900) and the National Natural Science Foundation of China (Grant Nos. 81771444).

The Supplementary Material for this article can be found online at: https://www.frontiersin.org/articles/10.3389/fpsyt.2018.00282/full#supplementary-material

Copyright © 2018 Gao, Lu, Shi, Ming, Xiao, Sun, Yao and Xu. This is an open-access article distributed under the terms of the Creative Commons Attribution License (CC BY). The use, distribution or reproduction in other forums is permitted, provided the original author(s) and the copyright owner(s) are credited and that the original publication in this journal is cited, in accordance with accepted academic practice. No use, distribution or reproduction is permitted which does not comply with these terms.