Background: Post-traumatic stress disorder (PTSD) occurs after exposure to actual or threatened death, serious injury, or sexual violence. Road traffic accident (RTA) is one of the traumatic experiences, which may result in PTSD. But treatment is mainly concentrated on physical health. This may be due to a lack of evidence in low-income countries.

Aim: To determine the incidence level and identify risk factors of PTSD after RTA.

Result: One hundred thirty-nine (46.5%) participants had at least three extremely severe symptoms that fulfil criteria B, C, and D of Diagnostic Statistical Manual IV of PTSD. The most frequent severe symptoms were having repeated, disturbing memories, thoughts, or images. Two hundred ten (70.2%) participants reported the extreme impact of the accident on work or schooling and 156 (51.9%) reported extreme problems in social functioning. Alcohol dependence, hazardous alcohol consumption, and harmful use were reported by 7.9%, 15.1%, and 4.7% of the participants, respectively. In the final model witnessing death, severe sleep problem and severe impairment in family functioning were significantly associated with PTSD.

Conclusion: Nearly half of RTA survivors develop PTSD. Clinicians need to link these patients to the psychiatry clinic. Special attention should be given to patients who witnessed death, with a serious disability, and previous psychiatric history.

Post-traumatic stress disorder (PTSD) occurs after exposure to actual or threatened death, serious injury, or sexual violence. It is characterized by recurrent, involuntary, and intrusive distressing memories of the traumatic event and dissociative reactions (1). PTSD symptoms are higher in traumatic events compared to non-traumatic events (2).

Road traffic accident (RTA) is one of the traumatic experiences, which may results in PTSD (3, 4). Globally, road traffic injuries result in more than 1.25 million deaths and 50 million injuries per year (5). More than 90% of road traffic deaths occur in low- and middle-income countries (5). In Ethiopia, though the number of vehicles is one of the lowest in the world, morbidity, disability, and mortality are high. In the region, where the current study is conducted, at least one person is killed each day and 1,884 people are injured or disabled per year due to RTA (6).

The incidence, prevalence, and severity of PTSD in peoples who witnessed or survived from RTA depend on sex, age, place of injury, perceived life treat, and responsibility for the injury (7, 8). Santiago et al. (9) have reported a prevalence of 30.1% at month 1 and 14.0% at month 12 in non-intentional injuries from a systematic review of 58 articles. A study in Sweden reported prevalence of 19.7% in women and 13.2% in men PTSD (10). In a follow-up study, 18.4% of survivors fulfill the criteria for PTSD within 6 months after the accident in Germany (11). In Nigeria, PTSD was higher in RTA survivors (26.7%) than two matched controls (8% and 8.7%) (12). Pervanidou et al. (13) in Greece have reported a higher (nearly half) incidence of PTSD in children who survived from motor vehicle accident.

Though PTSD was common in victims of RTA, the treatment options are mainly focused in restoring physical activity. The stress is either left undiagnosed or left untreated. If PTSD is left untreated, it will reduce quality of life, limit physical rehabilitation, and increase hospital stay (11, 17). This may be due to lack of evidences especially from low-income countries. The aim of this study was to determine the incidence level and identify factors associated with PTSD in individuals who survived from RTA.

The study is reported based on STROBE (Strengthening the Reporting of Observational Studies in Epidemiology) statement, which guides reporting of Observational Studies (18). This is an incidence report from individuals surviving RTA. The study was conducted in three orthopedic settings of Bahir Dar town Northwest, Ethiopia. One of the hospitals (Felegehiwote referral hospital) is a public regional referral hospital while the other two (Gambi and Addinas hospitals) are private hospitals.

Adults who survived from RTA within 1 month who

1. Have no major trauma before the RTA

2. Can communicate and with no major cognitive impairment which limits verbal report of the symptoms

3. Are admitted to one of the hospitals for orthopedic or other medical care. This is done because we believe that the accident may be enough to result in PTSD if the patient is admitted to a hospital.

Three hundred thirteen adult RTA survivors who had been admitted in one of orthopedic setting of Bahir Dar town were approached for interview, and 299 (95.53%) accepted to participate. One hundred ninety-two (64.2%) were males, and the median age was 31 with Inter Quartile Range (IQR) of 25–42. One hundred thirty-five (45.2%) of the participants were married, and 28.1% are illiterate. The median household income was 1,000 birr with average family members of 3.46 (Table 1). Two hundred sixteen (72.2%) of the survivors were travelers during the accident, and the remaining were pedestrians. One hundred twenty-eight (42.8%) of the participants witnessed a death in the accident, and 22.4% had other family member in the accident. 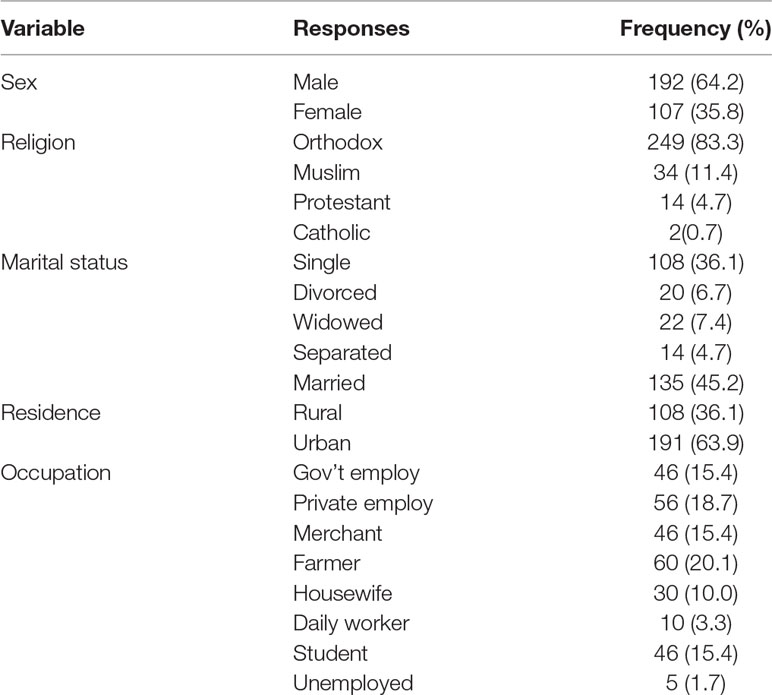 1. PTSD Checklist (PCL) civilian version, a self-report scale with 17 items having five-point severity scale, was used to assess symptoms of PTSD. It had good psychometric properties including test–retest reliability value of 96% (19). The tool had been developed based on the Diagnostic Statistical Manual symptoms of PTSD (1). The tool was not validated in Ethiopia, but we have done pre-test and confirmatory factor analysis (21) to see the performance of the tool. In the confirmatory factor analysis, the first two items were highly correlated (82.2%) and one of the items was deleted to avoid multicollinearity. The final 16-item instrument had Cronbach’s alpha (22) of 96.2% (Supplementary File). PTSD was reported if an individual report:

2. Sheehan disability assessment scale (23) was used to screen disability related with the trauma.

Data were collected with trained nurses, and mental health professionals closely supervised the data collection. The interview was done with Amharic (local language). Data entry was done with Epi Info-7 (28), and SPSS (29) was used to analyze the data. Generalized linear model with Poisson log-linear method (30) was applied to identify factors associated. The presence of association was presented with risk ratio (31) and 95% confidence interval where p-value ≤ 0.05 is considered as statistically significant.

One hundred thirty-nine (46.5%) participants had at least three extremely severe symptoms of PTSD, which fulfills criteria B, C, nd D of DSM IVRT criteria of PTSD (1). The most frequent severe symptoms were having repeated, disturbing memories, thoughts, or images of a stressful experience from the past and feeling jumpy or easily startled, while feeling emotionally numb or being unable to have loving feelings for closed ones and avoiding thinking about or talking about a stressful experience from the past or avoid having feelings related to it are rare severe symptoms (Table 2). 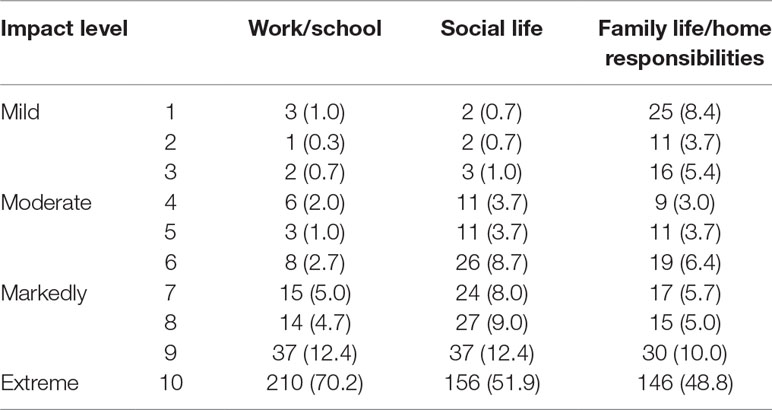 In bivariate analysis, sum score of Alcohol Use Disorder Identification Test (AUDIT), severe impact on social relationship and family functioning, severity of sleep problems, accident on other family members, witnessing death during the accident, and previous reported psychiatric illness was significantly associated with the incidence of PTSD. In the final model (multivariable analysis) witnessing death, severe sleep problem and severe impairment in family functioning were significantly associated with PTSD (Table 6).

The incidence of PTSD among RTA survivors was 46.5%. PTSD was associated with witnessing death during the accident, severe impact of the trauma on family relationship, and previous psychiatric illness.

The incidence of PTSD was higher in the current study than studies conducted elsewhere (9–12). The possible reason for this discrepancy may be:

1) In the current study, we include admitted survivors only. Individuals with severe injuries are more likely to be admitted, and PTSD was predicted by the severity of injuries in other studies (7, 8).

2) We exclude injuries who lasted for more than a month. Since, the level of stress decreases over time the high incidence may be explained by short duration (32). However, the level of PTSD is comparable with other studies in United Kingdom, Spain, and Greece (33, 34).

The most consistent associated factors with PTSD in previous studies include: gender, age, severity of injuries, premorbid psychological health, and perceived life threat (11, 32, 35, 36). In the current study, PTSD was associated with previous psychiatric illness, which was also reported in the study from UK (32, 33, 37).

There is 31% increased risk of developing PTSD in peoples who witnessed death than who don’t. This is also reported in other studies (2, 38). Impairment in family relationship and PTSD were significantly associated with PTSD (RR = 2.18, 95% CI [1.62, 2.92]). Severe impairment in family relationship results in serious psychological burden which results in worsening of PTSD symptoms (39, 40). Maintaining family relation especially in traditional society is important. If an individual fails to maintain this responsibility, it will worsen the psychological trauma (41, 42).

Some important variables such as sex and severity of injury were not associated with the incidence of PTSD. The result was mixed in previous evidences where some report higher level of PTSD symptoms among females and people with severe injuries while others report no significant association (14–16).

The study had some limitations. The first limitation is related with the validity of instruments, but we have done pretest and factor analysis to familiarize the tool, and the final version of the tools had excellent psychometric properties. The second limitation which may affect the result was we didn’t consider the injury type in the analysis which may limit application. We also excluded people with major cognitive impairment, and the result may be underestimated because these people have higher chance of having PTSD symptoms. We may also miss important biological predictors.

Nearly half of RTA survivors develop PTSD after a month, but the treatment is merely focused on physical rehabilitation. This indicates that clinicians need to link these patients to the psychiatry clinic as it is also helpful for better physical rehabilitation. Special attention should be given to patients who witnessed death, with serious disability, and have previous psychiatric history.

The original data will be made available by placing a reasonable request with the corresponding author.

Ethical clearance was obtained from Bahir Dar University. The code was given to every participant and their address was kept private. Participants were informed about the aim of the study, the advantages of the study, confidentiality, and their rights even to stop in the middle of the interview. Written consent was taken before data collection. Individuals with PTSD were linked to the psychiatric clinic.

The research was funded by Bahir Dar University. WF was supported through the DELTAS Africa Initiative [DEL-15-01]. The DELTAS Africa Initiative is an independent funding scheme of the African Academy of Sciences (AAS)’s Alliance for Accelerating Excellence in Science in Africa (AESA) and supported by the New Partnership for Africa’s Development Planning and Coordinating Agency (NEPAD Agency) with funding from the Wellcome Trust [DEL-15-01] and the UK government. The views expressed in this publication are those of the author(s) and not necessarily those of AAS, NEPAD Agency, WellcomeTrust, or the UK government.

The Supplementary Material for this article can be found online at: https://www.frontiersin.org/articles/10.3389/fpsyt.2019.00519/full#supplementary-material

Copyright © 2019 Fekadu, Mekonen, Belete, Belete and Yohannes. This is an open-access article distributed under the terms of the Creative Commons Attribution License (CC BY). The use, distribution or reproduction in other forums is permitted, provided the original author(s) and the copyright owner(s) are credited and that the original publication in this journal is cited, in accordance with accepted academic practice. No use, distribution or reproduction is permitted which does not comply with these terms.