There are wide individual differences in cognitive declines with aging (1–4), with variations in the extent and timing. For some individuals, declines occur earlier or faster and others are better able to maintain their cognitive functioning as they age (1, 3, 5, 6). Maintenance of cognitive functioning into old age is desirable for the individual as well as for society (7) as it promises enhanced quality of life (8), prolongs the time span in which individuals can live independently, and reduces the overall costs of long-term care (9).

Participants of the present study were from two measurement waves of the Midlife in the United States study (MIDUS) in 2004–2006 (M2) and 2013–2014 (M3). A total of 2,130 participants completed the cognitive assessment at both occasions and were thus included in this study. The sample ranged in age between 33 and 83 years (M = 55.76, SD = 11.09) at the first occasion and women compromised 56.1% of the sample. On average, the cognitive tests at M2 and M3 were conducted 9.32 years apart (SD = 0.45). Descriptive statistics are shown in Supplementary Table 1. The Institutional Review Boards at the University of Wisconsin and Brandeis University approved the study. Details of the MIDUS longitudinal design, sampling, and all assessment instruments are available on the MIDUS website (http://midus.wisc.edu/). Also, the MIDUS data is publicly available at https://midus.colectica.org/ or https://www.icpsr.umich.edu/web/ICPSR/search/studies?q=midus.

At both occasions, participants indicated the frequency of engaging in four cognitive activities: reading books, magazines or newspapers; doing word games such as crossword, puzzles, or scrabble; attending educational lectures or courses; and writing (e.g., letters, journal entries, or stories). For example, participants were asked “How often do you.read books, magazines, or newspapers?” and responded on a 6-point scale (1 = never to 6 = daily). The items were averaged. Based on their change scores (M3–M2), participants were categorized as those who decreased or maintained their level of cognitive activity over time (0) and those who increased their level of cognitive activity over time (1).

At both occasions, two cognitive factors were assessed using the Brief Test of Adult Cognition by Telephone (BTACT) (26, 27). The BTACT assesses key cognitive domains that are of theoretical significance for cognitive aging, and was designed for telephone administration with a wide range of ages and levels of educational attainment (26, 28). The BTACT battery includes a combination of existing and new subtests, and is a reliable, valid measure of cognition, despite its brief length [for more information on psychometric properties, see Lachman et al. (27)]. Seven cognitive tests are included in the BTACT (27). This included inductive reasoning (number series; completing a pattern in a series of five numbers), category verbal fluency (the number of words produced from the category of animals in 60 s), working memory span (backward digit span; the highest span achieved in repeating strings of digits in reverse order), processing speed (30 Second And Counting Task, or 30-SACT; the number of digits produced by counting backward from 100 in 30 s), and attention switching and inhibitory control [Stop and Go Switch Task, SGST; Tun and Lachman (28)] as well as two measures of episodic memory (immediate and delayed free recall of 15 words). For the SGST, reaction times were calculated with the mean of switch and non-switch trials median latencies on a task requiring alternating between the “normal” condition (i.e., respond “Go” to the stimulus “Green” and “Stop” to the stimulus “Red”) and the “reverse” condition (i.e., respond “Stop” to the stimulus “Green” and “Go” to the stimulus “Red”). Studies examining the psychometric properties of the BTACT yielded a good model fit with a two-factor solution consisting of executive functioning and episodic memory (4, 22, 27) and the two-factor structure was found to be invariant across the two occasions (4). Prior research also shows that psychosocial, behavioral, and biological factors are related to these two cognitive factors and changes therein [e.g., (29–33)]. The EF factor score includes the scores for working memory span, verbal fluency, inductive reasoning, processing, and attention switching and inhibitory control. The EM factor score includes the scores for immediate and delayed word list recall. Higher numbers indicate better EF and EM. The M3 scores were standardized using means and standard deviations from M2.

Ten questions were used to assess participant's functional health (35): How much does your health limit you in lifting or carrying groceries; bathing or dressing yourself; climbing several flights of stairs; climbing one flight of stairs; bending, kneeling, or stooping; walking more than a mile; walking several blocks; walking one block; vigorous activity (e.g., running, lifting heavy objects); moderate activity (e.g., bowling, vacuuming)? Responses were provided on a 4-point scale: 1 = a lot, 2 = some, 3 = a little, 4 = not at all. A mean score across the 10 items was computed with higher values representing better functional health.

Depression was included as a dichotomized variable (0 = no, 1 = yes) based on seven questions about experiences with depressed affect and anhedonia over at least a two-week period in the previous 12 months. If an individual said yes to four or more statements about depressed affect or anhedonia and they stated that they felt it “everyday” or “almost every day,” the dichotomous variable was coded as “yes” to show that the individual met the criteria for depression.

Participants were asked if they have experienced or been treated for diabetes or high blood sure (0 = no, 1 = yes).

Participants were asked if they have a history of a serious head injury (0 = no, 1 = yes).

Participants were asked if they have experienced or been treated for high blood pressure of hypertension (0 = no, 1 = yes).

Participants were asked if they have ever smoked cigarettes regularly (0 = no, 1 = yes).

Participants were asked how often they have experienced trouble getting to sleep or staying asleep during the past 30 days (1 = almost every day to 6 = not at all).

Participants were asked if they take vitamin C regularly (at least a couple of times a week) (0 = no, 1 = yes).

Participants were asked if they have experienced or been treated for alcohol or drug problems in the past 12 months (0 = no, 1 = yes).

Table 1 reports descriptive statistics and stability correlations for the repeated measures. Supplementary Table 1 reports within occasion correlations among the study variables. Education was correlated with cognitive activity at both waves indicating that individuals with lower education engaged less frequently in cognitive activity. On average, participants had 14.58 years of education (SD = 2.67), which represents some years of college. Of the sample, 51.1% had a college degree and 48.8% did not have a college degree. A multilevel analysis suggests a significant overall change in cognitive activity over time (B = 0.04, SE = 0.02, 95% CI = −0.01; 0.08, p = 0.024). More specifically, 888 individuals increased (M = 0.78, SD = 0.53), 876 decreased (M = −0.68, SD = 0.51), and 366 maintained the same level of cognitive activities over time. 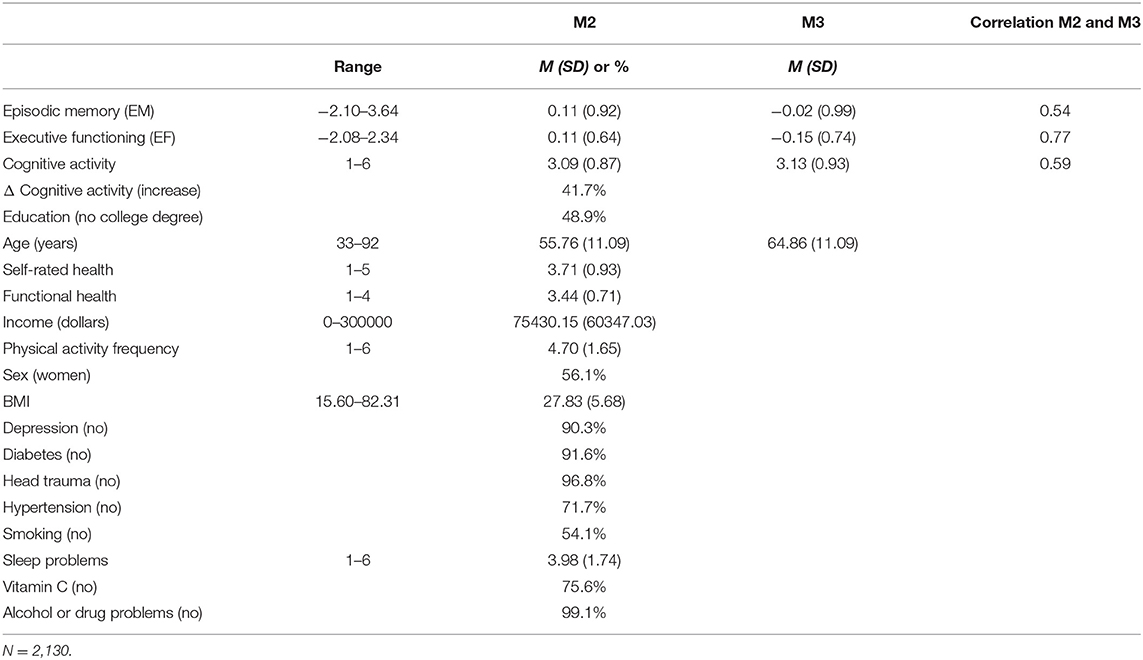 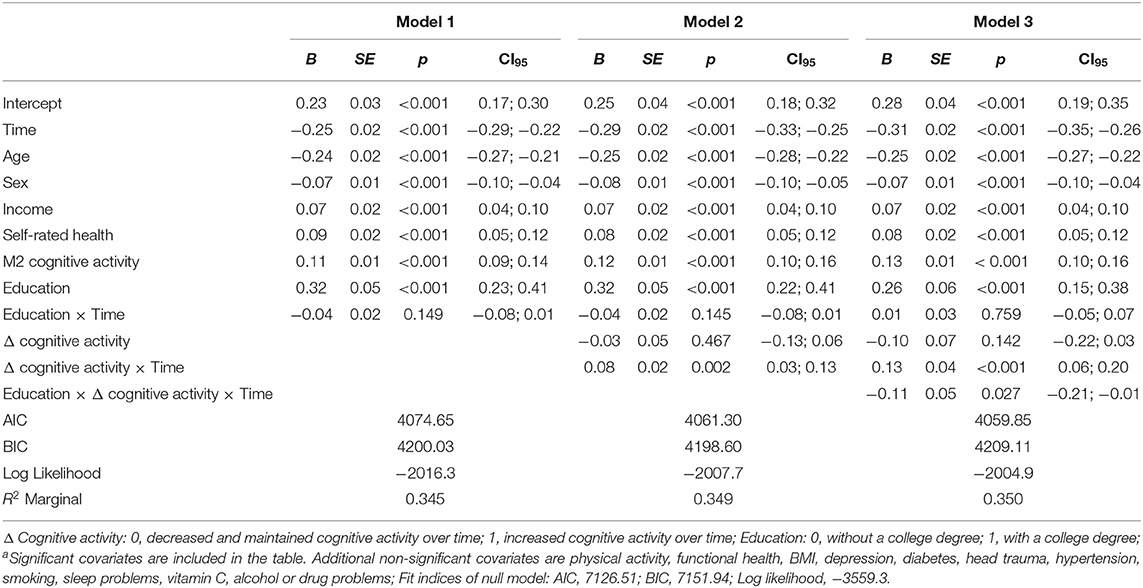 Table 2. Effects of change in cognitive activity and education on change in executive functioning (EF) with covariatesa. 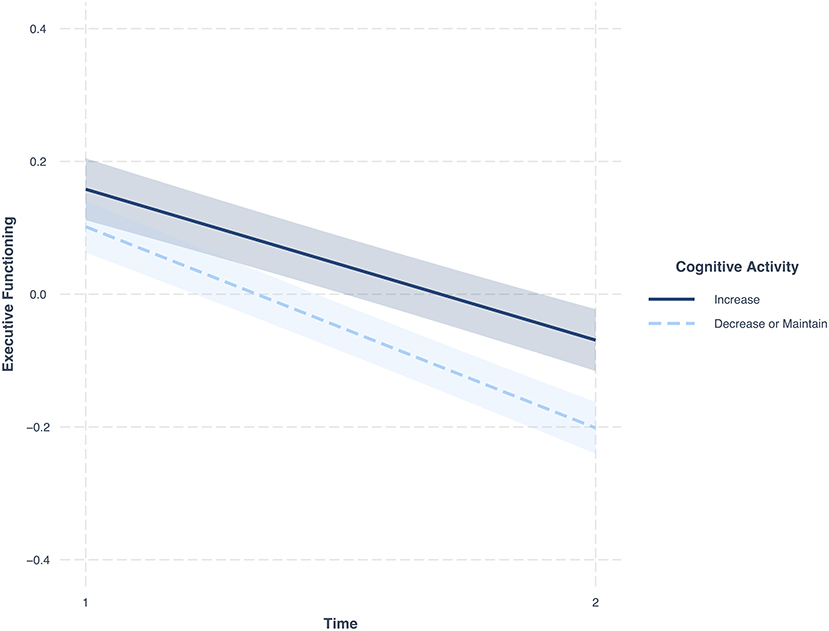 Table 3. Effects of change in cognitive activity and education on change in episodic memory (EM) with covariates.

Do the Effects of Cognitive Activity Change Vary by Educational Attainment? 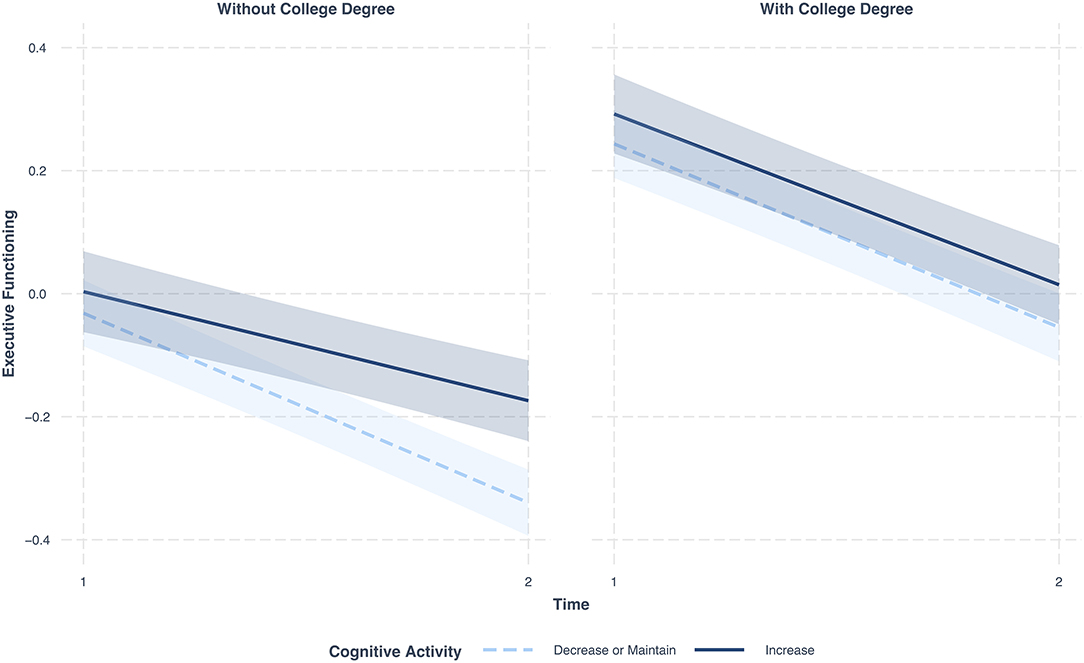 Finally, another limitation of the present study is that we only have two time points of repeated measures of cognitive activity and cognitive performance. The relationship between cognitive activities and cognitive performance represents a complex reciprocal process. Cognitive declines can also lead to curtailment of cognitive activities [e.g., (40)]. Future longitudinal studies with three or more occasions or intervention studies that target an increase in everyday cognitive activities are needed to more directly examine the directionality, causality, and reciprocity of this relationship. Although cognitive training studies have demonstrated that older adults can improve cognitive functioning when provided with intensive training in strategies that promote thinking and remembering [e.g., (41)], there is little transfer of function from specifically trained skills to new cognitive tasks, to reducing or reversing cognitive declines, or to maintaining any gains in cognitive functioning (38, 42). Additional research is needed to address the complexity of this reciprocal relationship and to test how an intellectually engaged lifestyle can best be promoted in everyday life.

Publicly available datasets were analyzed in this study. This data can be found at: https://midus.colectica.org/; https://www.icpsr.umich.edu/web/ICPSR/search/studies?q=midus.

The studies involving human participants were reviewed and approved by the Institutional Review Boards at the University of Wisconsin and Brandeis University. The patients/participants provided their written informed consent to participate in this study.

The Supplementary Material for this article can be found online at: https://www.frontiersin.org/articles/10.3389/fpsyt.2021.708974/full#supplementary-material

Copyright © 2021 Stieger and Lachman. This is an open-access article distributed under the terms of the Creative Commons Attribution License (CC BY). The use, distribution or reproduction in other forums is permitted, provided the original author(s) and the copyright owner(s) are credited and that the original publication in this journal is cited, in accordance with accepted academic practice. No use, distribution or reproduction is permitted which does not comply with these terms.