Background: Abnormalities in the hypothalamic-pituitary-adrenal axis (HPA) have been reported in individuals with suicide behavior. The aim of the study was to evaluate cortisol levels in peripheral plasma of individuals with more than one suicide attempt.

Conclusions: Cortisol levels are increased in individuals who attempt suicide and higher of cortisol concentrations in plasma regard to depression and more attempts of suicide.

Suicide is a public health problem worldwide. In 2020, 1.5 million deaths by suicide were reported (1). Epidemiology studies indicate that an estimate of 80% of these deaths were in low and middle-income countries (2, 3).

The etiology of suicide behavior is unknown; however, it has been proposed a diathesis-stress model to explain its pathogenesis. It is believed that the diathesis may have a biological origin. The literature shows that, when stress in perceived, there are clear changes in cortisol levels (4). Therefore, the stress diathesis theory of suicide postulates that there are predisposing and precipitating risk factors of suicide attempts. Genetic, inflammation, serotoninergic systems, peripheral biomarkers as cholesterol and, the alteration of the hypothalamic-pituitary-adrenal axis (HPA), could be participant in the biological diathesis of suicide behavior (5–7).

This is a cross-sectional study conducted from January to December, 2020, in Tabasco, Mexico. This study meets the criteria established in the Declaration of Helsinki and was approved by the ethics committee of the Regional Hospital of High Specialty of Mental Health (HRAESM/DG/UWI/351/2020). All participants signed an informed consent. None of the individual included in the study received financial compensation for their participation.

Our study group comprised a total of 143 Mexican individuals, that were recruited from February 2020 to July 2021. We included three hospitals in Tabasco State: The High Specialization Regional Hospital Dr. Gustavo A. Rovirosa Pérez in Villahermosa City, The General Hospital of Comalcalco Dr. Desiderio G. Rosado Carbajal in Comalcalco City, and The Regional Hospital of High Specialty of Mental Health in Villahermosa City.

The sample was divided in 3 groups: (1) The suicide attempt group included 56 patients who had a diagnosis of suicide attempt, made by at least one psychiatrist using the evaluation of suicide behavior by the Columbia Suicide Severity Rating Scale (C-SSRS); they were all selected from admissions to the hospital emergency department. (2) The group of individuals with psychiatric diseases (excluding depression) and no-history of suicide behavior was formed by 31 patients; the psychiatric diagnoses (including schizophrenia) were made by at least one psychiatrist. (3) The healthy control group included 56 participants who reported no-history of suicide attempt or psychiatric illnesses. All the participants were volunteers; they were informed about the study, the procedure and the objectives; they all signed an informed consent form and agreed to the collection of the biological sample. The objective of including these three groups was to compare the cortisol levels in three types of population, since literature indicates variations among them.

The group of individuals with psychiatric diseases but without suicide attempt were diagnosed by psychiatrics according to the DSM-5. Who reported in the interviews that they did not have any previous suicide attempts and we corroborated that information in their medical records.

The control group was formed by 56 individuals (64.3% males and 35.7% females) with an age range of 18–55 years and a mean of 34.30 years of age (±10.37), who were volunteer donors from the blood bank of The High Specialization Regional Hospital Dr. Gustavo A. Rovirosa Pérez. This group received a general check-up by physicians and they reported no psychiatric illness or history of suicide attempts.

Depression symptoms were evaluated in individuals with suicide attempt using the HAM-D, consisting of 17 questions validated in Spanish and evaluates the depressive symptomatology of the patients (18). It was important to evaluate depression, since it is an important factor related to suicide attempts (19). The scale is widely available and has two common versions with either 17 or 21 items that score between 0 and 4 points. The first 17 items measure the severity of depressive symptoms and as examples the interviewer rates the level of agitation clinically noted during the interview or how the mood is impacting on an individual's work or leisure pursuits. The extra four items on the extended 21-point scale measure factors that might be related to depression, but are not thought to be measurements of severity, such as paranoia or obsessional and compulsive symptoms. The scoring is based on the 17-item scale and scores of 0–7 are considered as being normal, 8–16 suggest mild depression, 17–23 moderate depression and scores over 24 are indicative of severe depression; the maximum possible score is 52 on the 17-point scale.

Peripheral blood samples were taken from three groups and the blood was placed in EDTA (Ethylenediamine tetraacetic acid) containing tubes [BD Vacutainer, K2 EDTA (K2E)] Plus Blood Collection Tubes, placed on ice. Samples from the group of individuals with suicide attempt were taken the day after their admission to the emergency room. After the peripheral blood samples were collected, they were immediately centrifuged and plasma aliquots were made and stored at −80°C. Cortisol concentrations in plasma were determined by means of the competitive Enzyme-Linked Immunoabsorption Assay (ELISA). The samples were analyzed using a commercially available Cortisol Competitive Human ELISA kit by Invitrogen. The mean of sample collection was at 11:00 am.

Data were analyzed using the SPSS version 27.0 (IBM Corporation, Armonk, NY). Descriptive variables were expressed as means and Standard Deviation (SD) for continues variables, and frequencies and percentages for categorical variables. The initial comparison between patients with suicide attempt and the comparison groups were analyzed with X2-test also for categorical variables and with independent samples t-test for continuous variables. In continues variables, an analysis of variance followed by Bonferroni correction were performed. Cortisol levels and confounding variables were analyzed by linear regression analysis. We performed linear regression with confounding variables (age, sex, education, marital status, socioeconomic level, time of collection and body mass index) which did not present statistical differences that influenced the cortisol levels of our study group. To determine the association between cortisol levels and suicide attempt, we performed an age-adjusted linear regression analysis. Significance was established at p ≤ 0.05 for all analyses. 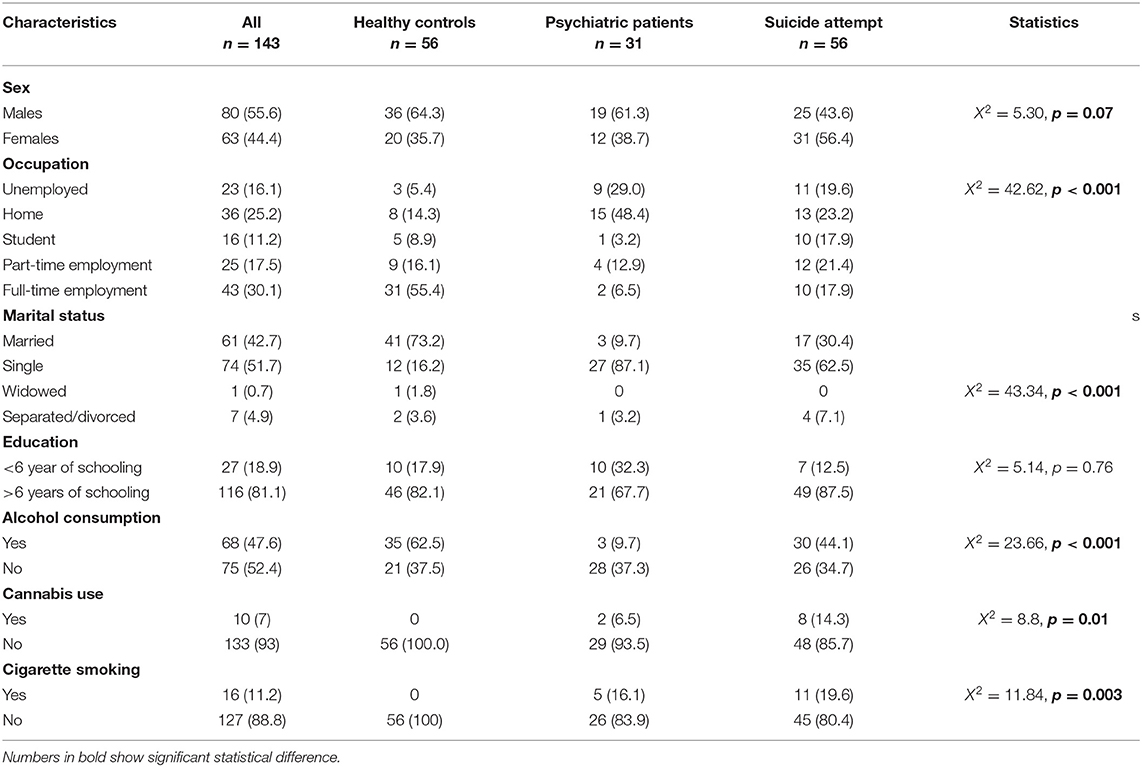 Table 2. Comparison of cortisol levels and age among groups.

Characteristics of the Individuals With Suicide Attempt

Table 3. Characteristics of suicide attempt among males and females in Mexican population.

In Table 4, we show the levels of cortisol in plasma μg/dL) in subgroups of suicide attempters and the comparison groups (healthy individuals or with psychiatric diseases) in a Mexican population.

Table 4. Level of plasma cortisol (μg/dL) in subgroups of suicide attempters and comparison groups (health and psychiatric group) in a Mexican population.

The results of the linear regression analysis were statistically significant when we compared cortisol levels between healthy controls and individuals with suicide attempt (F = 7.26, P-value = 0.008) (Table 3). But no statistically significant differences were observed when comparing with the psychiatric diseases group (F = 1.49, p = 0.22). Subsequently, we evaluated differences in the presence of symptoms of depression. We found that individuals with (F = 8.99, P = 0.004) and without depression showed increased cortisol levels in comparison with healthy controls and/or individuals with psychiatric diseases.

A conclusive description of the increased levels of cortisol in patient with suicide attempt has not been reached yet. However, some explanations have been proposed: some studies correlate 5-HT1A receptors of serotonin (5-HT) with cortisol levels, stress and suicide attempt (34, 35). In this sense, the altered serotonin is associated with suicide behavior, making people more aggressive and more susceptible to mood disorders (36, 37). Also, the hippocampus plays an important role in feedback mechanisms of the HPA axis (38, 39), as well as in the levels of 5HT1A receptors. The hyperactivity of the HPA axis produced by chronic exposure to stress generates an elevation of plasma corticosteroids, including cortisol (40). Having high levels of cortisol reduces the mRNA of 5HT1A receptors, decreasing their levels, resulting in low rates of serotonin metabolism, but when serotonin dysfunction occurs there is a risk of suicidal behavior (41–43). Another way in which high cortisol levels have been related to a decrease in 5-HT, is due to the increased tryptophan 2,3-dioxugenase (TDO) (20, 21); this enzyme is involved in the degradation of tryptophan (TRP) via the kynurenine pathway, which synthesizes 5-HT (44). With lower levels of TRP, there is not enough TRP available in brain to synthesize 5-HT, as there are more enzymes that metabolize TRP (45), and decreased amounts of the 5-HT neurotransmitter are associated with attempted suicide (46, 47).

Some limitations in this study should be noted. First, we did not determine menstrual cycle, contraceptive use or hormone replacement in women who participated in the study. Second, the sample size could be considered small. However, it is the first study that explores cortisol levels in a Mexican population with suicide attempt. Third, this is a cross sectional study, then longitudinal studies that measure cortisol levels are needed. Also, we did not include the use of medications and if they received psychotherapy or some medication. Further, we did not aboard if the study population had been received psychological treatment in their childhood, neither, the evaluation of resilience capacity, or if they had some stressful life events, among other evaluations that could have been of great value for our study to include.

The studies involving human participants were reviewed and approved by HRAESM/DG/UWI/351/2020. Written informed consent to participate in this study was provided by the participants' legal guardian/next of kin.

The Supplementary Material for this article can be found online at: https://www.frontiersin.org/articles/10.3389/fpsyt.2022.912021/full#supplementary-material

Copyright © 2022 Genis-Mendoza, Dionisio-García, Gonzalez-Castro, Tovilla-Zaráte, Juárez-Rojop, López-Narváez, Castillo-Avila and Nicolini. This is an open-access article distributed under the terms of the Creative Commons Attribution License (CC BY). The use, distribution or reproduction in other forums is permitted, provided the original author(s) and the copyright owner(s) are credited and that the original publication in this journal is cited, in accordance with accepted academic practice. No use, distribution or reproduction is permitted which does not comply with these terms.

The Neurobiology of Suicide: The 'Suicidal Brain'