In this paper we unveil a new sensing strategy for sensitive and selective detection of Hg2+ through surface-enhanced Raman scattering (SERS) using Ag2Te nanoparticles (NPs) as a substrate and recognition element and rhodamine 6G (R6G) as a reporter. Ag2Te NPs prepared from tellurium dioxide and silver nitrate and hydrazine in aqueous solution containing sodium dodecyl sulfate at 90°C with an average size of 26.8 ± 4.1 nm (100 counts) have strong SERS activity. The Ag2Te substrate provides strong SERS signals of R6G with an enhancement factor of 3.6 × 105 at 1360 cm−1, which is comparable to Ag NPs. After interaction of Ag2Te NPs with Hg2+, some HgTe NPs are formed, leading to decreases in the SERS signal of R6G, mainly because HgTe NPs relative to Ag2Te NPs have weaker SERS activity. Under optimum conditions, this SERS approach using Ag2Te as substrates is selective for the detection of Hg2+, with a limit of detection of 3 nM and linearity over 10–150 nM. The practicality of this approach has been validated for the determination of the concentrations of spiked Hg2+ in a pond water sample.

Monitoring the level of mercury ions in ecological systems is an extremely important issue, mainly because they are highly toxic, non-biodegradable, and bioaccumulated (Zahir et al., 2005; Clarkson et al., 2008). Several techniques such as atomic absorption/emission spectrometry, atomic fluorescence spectrometry, inductively coupled plasma spectrometry (ICP-MS) have been applied to detect Hg2+ in environmental and biological samples (Leermakers et al., 2005; Butler et al., 2006; Li et al., 2006). Among them, ICP-MS provides the highest sensitivity and a widest linear range, but the system is expensive because it requires expensive noble gas. In addition, it is not easy for the in-field analysis.

Relative to normal Raman scattering, SERS can provide enhancement factors (EFs) up to 1015 theoretically through a long-range electromagnetic (EM) effect such as “hot spots,” and/or chemical effect due to the charge-transfer excitation of chemisorbed molecules (Aravind et al., 1981; Kneipp et al., 1997; Nie and Emery, 1997). The EF values are dependent on the compositions, sizes, and shapes of the SERS substrates. Relative to spherical shaped silver NPs, silver plates and silver nanowires provides higher EF values; EF values up to 108 have been demonstrated for the SERS signals of common reporters such as Rhodamine 6G (R6G), 4-mercaptobenzoic acid, and 5,5′-dithiobis(2-nitrobenzoic acid) (Tao et al., 2003; Yang et al., 2007). Gold-tellurium nanodumbbells, gold-tellurium nanopeapods, and gold pearl-necklace nanomaterials (Au PNNs) providing EF values of R6G up to 5.6 × 109 have been used for the selective detection of human serum albumin down to 70 pM using AB 580 as a reporter (Lin and Chang, 2008; Lin et al., 2011).

In this study, we developed a simple SERS approach using silver telluride (Ag2Te) NPs as substrates for sensitive and selective detection of Hg2+ in aqueous solutions. Ag2Te NPs were prepared from tellurium dioxide and silver nitrate in the presence of hydrazine and sodium dodecyl sulfate (Samal and Pradeep, 2009). The Ag2Te NPs provided SERS enhancement effect of R6G. Upon increasing the concentration of Hg2+ ions, the SERS signal of R6G decreased. The novel SERS approach was further validated by the determination of the concentrations of Hg2+ in pond water samples, showing advantages of sensitivity, selectivity, and simplicity.

Hydrazine (1 mL) was added slowly to a sample vial containing aqueous solution (9 mL) of tellurium dioxide (5 mM), silver nitrate (10 mM), and sodium dodecyl sulfate (30 mM). The mixture was then subjected to constant magnetic stirring at 90°C. The solution changed color from colorless to dark brown after 8 h, indicating the formation of Ag2Te NPs. To terminate the reaction and to remove most of the matrix (e.g., hydrazine), the Ag2Te NPs were subjected to three cycles of centrifugation [relative centrifugation force (RCF): 12000 g for 10 min] and wash (3 × 10 mL of water). For simplicity, the concentration of the as-prepared Ag2Te NPs in 10 mL H2O is represented as 1 X.

JEOL JSM-1230 and FEI Tecnai-G2-F20 transmission electron microscopes (TEM) were used to measure the sizes and shapes of the as-prepared Ag2Te NPs. The re-dispersed Ag2Te NPs were separately placed on formvar/carbon film Cu grids (200 mesh; Agar Scientific) and dried at ambient temperature (25°C). An energy dispersive X-ray (EDAX) system (Inca Energy 200, Oxford) was used to determine the composition of the as-prepared NMs. Raman spectra were recorded using a Raman spectrometer (DongWoo 500i, Korea) equipped with a 50× objective and a charge-coupled detector. The excitation wavelength was 532 nm and the spectral aperture was 50 μm. The signal collection time for each sample was 30 s.

Scheme 1 shows the detection of Hg2+ based on differential SERS EFs of Ag2Te and HgTe NPs. Ag2Te relative to HgTe provides a higher EF value. The displacement reaction between Hg2+ and Ag2Te NPs leads to the formation of HgTe nanostructures and decomposition of Ag2Te NPs. As a result, the SERS signal of R6G decreases upon increasing the concentration of Hg2+, mainly because Ag2Te relative to HgTe NPs provides a greater SERS EF value. Although the Ksp values of Ag2Te and HgTe are unavailable, the latter has a small one based on that of the metal selenides (Moon et al., 2010). For example, Ag2Se relative to HgSe has a higher Ksp value (1 × 10−54 vs. 4 × 10−59) (Wang et al., 2007). It has been reported that the reaction of Ag2Te nanostructures with Hg2+ions is spontaneous and fast (Samal and Pradeep, 2011). 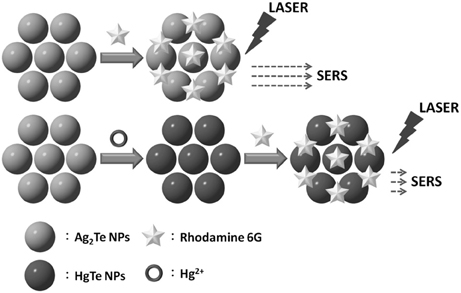 Scheme 1. Schematic representation of the sensing of Hg2+ through SERS using Ag2Te NPs as a substrate and recognition element.

To confirm the formation of HgTe NPs from the reaction of Ag2Te NPs with Hg2+, we conducted TEM, EDX, and XRD measurements. Figure 1A shows the TEM image of as-prepared Ag2Te NPs with an average size of 26.8 ± 4.1 nm (100 counts). On the other hand, the TEM image displayed in Figure 1B shows HgTe NPs with an average size of 37.7 ± 6.8 nm. Different morphologies in the two TEM images reveal the changes in the Ag2Te NPs. The EDX patterns (Figures 1C,D) confirm the displacement reaction between Hg2+ and Ag2Te NPs. The XRD patterns of Ag2Te NPs (Figure 1E) and its reaction product (Figure 1F) with Hg2+ agree with the literature data of Ag2Te (JCPDS: 34-0142) and HgTe (JCPDS: 75-2084), respectively. 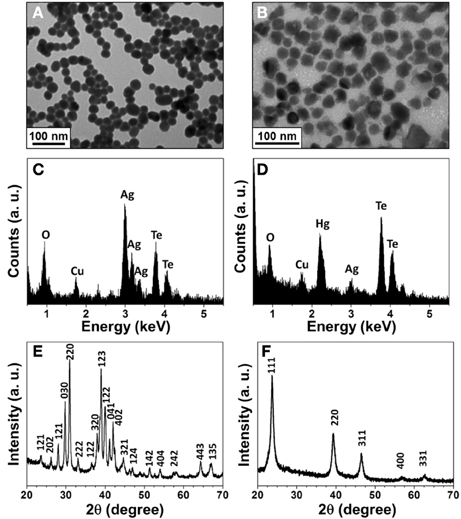 The EF value of Ag2Te NPs (0.1 X) was investigated using R6G as a reporter. The limits of detection (LODs) at a signal-to-noise (S/N) 3 for R6G using silica wafers and Ag2Te NPs as SERS substrates were 1.8 mM and 5 nM, respectively, which reveals that the Ag2Te substrate provided an EF value of 3.6 × 105. The EF value of Ag2Te NPs is comparable with that of Ag NPs (Wang et al., 1980; Kerker, 1987). The SERS signal of R6G on the Ag2Te substrate was about 5-fold greater than that on an HgTe substrate that had been formed from the reaction of Ag2Te NPs with 100 nM Hg2+ ions. The decreased SERS signal of R6G at a constant concentration (10 μ M) is related to the concentration of Hg2+ ions (to be discussed later), revealing the potential use of this approach for the determination of the concentration of Hg2+ ions. The decrease in SERS signal was due to the decreased amount of Ag2Te NPs.

In order to optimize the sensing condition, we investigated several important parameters, including concentration of R6G, reaction time, and pH. The strongest SERS signal of R6G at 1361 cm−1 (aromatic C-C stretching) was used to evaluate the effects of these parameters. Figure 2A shows that the SERS signal of R6G at 1361 cm−1 increased upon increasing its concentration, with a saturated concentration of 10 μ M. Figure 2B displays the reaction was completed within 10 min when using Hg2+ at the concentration of 100 nM. Figure 2C displays that pH is not an important factor over the investigated pH range (4.0–10.0), mainly because the replacement reaction between Ag2Te and Hg2+ ions and the SERS signal of R6G are both not pH sensitive. Although larger Ag2Te NPs provided greater SERS EF values, poor reproducibility of SERS signals due to their instability in aqueous solution is problematic. 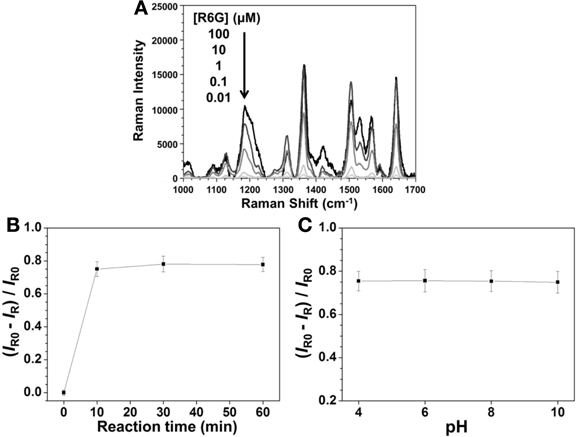 Sensitivity and Selectivity of Hg2+ Detection

Figure 3A shows that the SERS signal of R6G decreased upon increasing the Hg2+ concentration, with a linear relationship between the SERS ratios ((IR0—IR)/IR0) at 1361 cm−1 and the Hg2+ concentration ranging from 10 to 150 nM (R2 = 0.98). This approach provided an LOD at an S/N = 3 of 3 nM for Hg2+ ions. The sensitivity is better than that provided by SERS approaches using different reporters (Zamarion et al., 2008; Han et al., 2010; Senapati et al., 2011; Luo et al., 2012). Control experiments were carried out to test the specificity of the developed approach for Hg2+ ions (100 nM) under optimal conditions in the presence of various metal ions (each at a concentration of 1 μM). The results displayed in Figure 3B reveal that the sensing approach is selective to Hg2+ ions. The potential interferences could not replace Ag+ ions from the Ag2Te NPs, resulting in negligible changes in the SERS signal of R6G at 1361 cm−1.

Figure 3. (A) Sensitivity and (B) selectivity of the SERS approach for Hg2+. Concentrations: 100 nM for Hg2+ and 1 μM for the other metal ions. Reaction time was 10 min and pH value was 4.0. The other conditions are the same as in Figure 2. 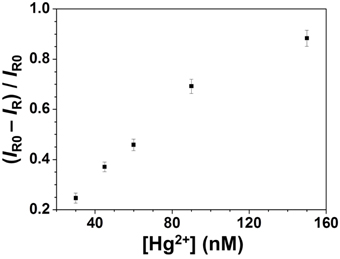 Figure 4. Detection of Hg2+ in a spiked pond water sample through SERS using Ag2Te NPs as a substrate. Concentrations of Hg2+ ions ranged from 30 to 150 nM.

We have demonstrated a SERS-based approach for the detection of Hg2+ ions using Ag2Te NPs as a substrate and recognition element and R6G as a reporter. To the best of our knowledge, this is the first example using a single material (Ag2Te) as the substrate and recognition element in SERS technology. Relative to Ag2Te, HgTe is a less SERS active substrate, thus the SERS signals of R6G decreased upon increasing Hg2+ concentration when using Ag2Te NPs as a substrate. This novel approach is sensitive (LOD 3 nM) and selective for the detection of Hg2+ ions over a wide pH range. With its high sensitivity, selectivity, and simplicity, the SERS-based approach holds great potential for the determination of the concentrations of Hg2+ in environmental samples.

Copyright © 2013 Wang, Lin, Roy and Chang. This is an open-access article distributed under the terms of the Creative Commons Attribution License (CC BY). The use, distribution or reproduction in other forums is permitted, provided the original author(s) or licensor are credited and that the original publication in this journal is cited, in accordance with accepted academic practice. No use, distribution or reproduction is permitted which does not comply with these terms.