The first example of a tandem reaction involving double-bond migration in combination with telomerization is reported. Homogeneous and heterogeneous Ru catalysts were employed as isomerization catalysts, and telomerization was realized using a homogeneous Pd(0) precursor complex with a N-heterocyclic carbene (IMes) ligand. Overall conversions approaching 60% were achieved with the best selectivity to telomerization products of 91% attained at 11% conversion. Conversion was markedly higher in the presence of longer-chain alcohol (1-butanol) as the nucleophile (telogen).

Telomerization reactions, defined as the dimerization of dienes with incorporation of a nucleophile, have a major synthetic potential (Smutny, 1967; Zapf and Beller, 2002). The versatile range of nucleophiles used in this reaction, from alcohols (Krotz et al., 2001; Jackstell et al., 2002; Palkovits et al., 2008), amines (Maddock and Finn, 2000; Grotevendt et al., 2007) and carbon dioxide (Behr et al., 2007), indicates its synthetic flexibility in a variety of applications. However, until recently telomerization studies have been limited to C4-C5 dienes (butadiene and isoprene) due to their high reactivity (Benvenuti et al., 1999; Jackstell et al., 2007), limiting the range of feedstocks that can be used in the reaction. Following advances in the understanding of the bis-allyl monometallic mechanism (Behr and Urschey, 2003) including parallel catalytic cycles for the formation of lineal and branched telomerization products and dimerization by-products (Vollmuller et al., 2000; Jackstell et al., 2004) and the consequent catalysis development with the use of nucleophilic carbine (NHC) based catalysts (Clement et al., 2008), we have recently reported the telomerization of long-chain dienes (1,3-pentadiene and 1,3-hexadiene) with primary alcohols using homogeneous Pd catalysts with NHC ligands (Torrente-Murciano et al., 2010a) adding to another previous example of long-chain dienes telomerization of C10 terpene myrcene (Behr et al., 2010; Lopes et al., 2011).

Figure 1. A scheme of a tandem isomerization—telomerization of long-chain dienes for the case of pentadienes; the isomer selectively participating in the telomerization reaction is shown in red.

Heterogeneous isomerization Ru catalysts were prepared by wet impregnation of the support with a solution of RuCl3 for 2 h. After this time, the catalyst was washed and dried at 80°C under vacuum prior its reduction with an aqueous solution of NaBH4 (0.1 M) at room temperature. Titanate nanotubes (Ti-NT) were synthesized following a hydrothermal method described elsewhere (Torrente-Murciano et al., 2010b) and were used as catalytic support without any further treatment.

All reactants were purchased from Fisher Chemicals and used without further purification. Reactions were carried out in 15 mL Ace Pressure Tubes equipped with an FETFE® O-ring which sits under the top rim of a PTFE bushing. The heavy-wall borosilicate glass tubes are rated for 11 bar. The reaction temperature (in the range of 70–130°C) was controlled with an oil bath and a temperature controller. Specific reaction temperatures are given in the summary Tables 1–3. In a typical experiment the desired quantity of the catalysts (specific quantities are given in Table footnotes), solvent and reactant were introduced into the tube together with a stirrer bar; nitrogen was bubbled to remove air. An initial sample (time = 0) was taken for analysis. The tube was then sealed and introduced into the oil bath to start the reaction. After a certain reaction time the tube reactor was placed into an ice-bath to quench the reaction and condense the volatiles. Samples were analyzed in duplicate by gas chromatography using a Varian GC CP-3900 instrument, equipped with a non-polar capillary column AT-5 (5% phenyl/95% methylpolysiloxane, 30 m × 0.32 mm), an autosampler and a Flame Ionization Detector (FID). 1 mL min−1 He flow was used as a carrier gas; the injector and detector temperatures were 250 and 315°C respectively. The oven temperature programmes were: (1) 40°C for 5 min, ramp to 80°C at 5° min−1, ramp to 200°C at 15° min−1 for isomerization reaction and (2) 40°C for 5 min, ramp to 100°C at 10° min−1, ramp to 180°C at 8° min−1, ramp to 220°C at 20° min−1 for the telomerization products. External calibration was carried out to cover the range of concentrations of the analyzed components using analytical standards with a purity >99% and decane as internal standard. The material balance was closed in all reactions to within ±5% and the accuracy of determination of concentrations was better than ±5% based on five consecutive measurements of reactants standards of known concentrations. 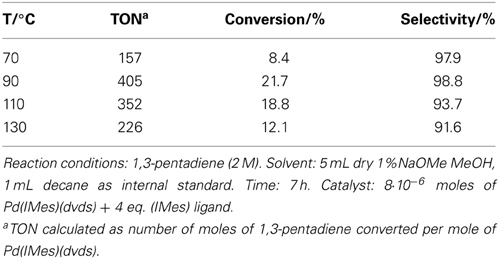 Table 2. The effect of reaction temperature in the telomerization of 1,3-pentadiene with methanol catalyzed by Pd(IMes)(dvds). 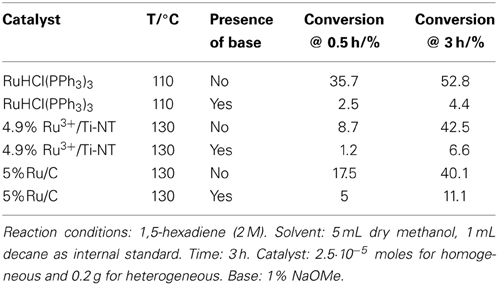 Table 3. Effect of the presence of base NaOMe on the isomerization of 1,5-hexadiene.

Conversion values were calculated based on the disappearance of 1,4-pentadiene. The telomerization selectivity is the percentage of telomerization products vs. by-products such as dimers and trimers of the dienes. Telomer isomer distribution was not determined at this stage as the main focus of this work is to determine the feasibility of the tandem reaction and thus, the overall conversion to telomerization products.

The absence of an isomerization catalyst resulted in a negligible overall conversion with no presence of the telomere products. Several catalytic systems were used for the isomerization step, from homogeneous Ru catalysts to supported Rh, Ru, and Pd metallic and ionic catalysts. Building on our previous results that had shown the effectiveness of titanate nanotubes as a nanostructured support for heterogenization of Pd species in the double bond migration reaction (Torrente-Murciano et al., 2007), their use has been further explored for rhodium and ruthenium ionic species. Ru3+/Ti-NT catalysts have shown a higher isomerization conversion in the tandem system compared to its palladium and rhodium counterparts even at a lower metal content.

In this work, results for one telomerization catalyst, Pd(IMes)(dvds) are shown, although more were screened: homogeneous Pd catalysts with PPh3 ligands show high activity toward the telomerization of 1,3-pentadiene, but their activity drops at temperatures above 70°C due to formation of palladium black (Torrente-Murciano et al., 2010a). On the other hand, Pd(0) complexes with nucleophilic carbene (NHC) ligands usually show enhanced stabilities; Pd(IMes)(dvds) is thermally stable at 90°C in the presence of methanol. Further thermal stabilization is achieved by the use of long-chain alcohols as nucleophile/solvent in the telomerization reaction, which concomitantly increases the solubility of the dienes leading to higher conversions (Torrente-Murciano et al., 2010a). Elevated temperatures were required to attain reasonable activities in the isomerization reactions. However, temperatures above 90°C have negative influence on conversion in the telomerization of the conjugated diene with this catalyst, as shown in Table 2.

Tandem reactions were carried out in the presence of 1% NaOMe base. In the absence of a base no conversion was achieved at 70°C and even at 90°C in the telomerization of 1,3-pentadiene with butanol with Pd(IMes)(dvds) catalyst.

The main challenge associated to this tandem system is matching the rates of isomerization and telomerization reaction steps, while keeping catalysts stable under the reaction conditions. It is known, that in the absence of the reactant diene, the Pd NHC telomerization catalysts quickly deactivate (Torrente-Murciano et al., 2010a). Thus, high isomerization conversion and rate are essential to achieve good conversion in the tandem reaction to the product telomers without compromising the compatibility of the catalysts. However, relatively low rates of isomerization were achieved with the studied range of catalysts, requiring relatively high reaction temperatures (>100°C) to achieve sufficiently high isomerization conversions. However, despite the enhanced stabilities of Pd-carbene based catalysts, a decrease in conversion of Pd(IMes)(dvds) was observed at temperatures above 90°C as shown in Table 2, directly related to the catalyst stability at high temperatures. As selectivity remains reasonably high, the loss of activity is attributed to the loss of active form of the catalyst, also suggesting that dimerization side reaction was not specially favored at high temperatures.

In conclusion, we have reported for the first time a tandem isomerization-telomerization reaction, thus extending synthetic utility of the atom-efficient telomerization reaction. The observed trends with respect to the effects of temperature, base and relative rates of reactions suggest ways toward developing more effective, optimized, catalytic systems for such tandem reactions.

Copyright © 2014 Torrente-Murciano, Nielsen, Cavell and Lapkin. This is an open-access article distributed under the terms of the Creative Commons Attribution License (CC BY). The use, distribution or reproduction in other forums is permitted, provided the original author(s) or licensor are credited and that the original publication in this journal is cited, in accordance with accepted academic practice. No use, distribution or reproduction is permitted which does not comply with these terms.