Floristic patterns of seed plants in Yunnan, southwestern China, were studied to assess the relationship between the floristic geography and geological history. A database of 38 regional floristic studies covering Yunnan was used and the patterns of seed plant distributions across these regional floras were quantified at the generic level. Genera with tropical Asian distributions are the most dominant geographical elements in the Yunnan flora. They show oblique patterns of abundance across Yunnan. They are most abundant in southern and western Yunnan, and their proportion in regional floras declines abruptly in eastern, central and northern Yunnan. The oblique abundance patterns of geographical elements in Yunnan differ from those of genera in southern and eastern China, which had a high correlation with latitudinal gradients controlled by climate. They cannot be explained by climate alone, but can be explained at least partly by the geological history. The oblique abundance patterns of Yunnan seed plants correspond well to the clockwise rotation and southeastward extrusion of the Simao-Indochina geoblock caused by the collision of India with Asia.

Yunnan province in southwest China (21°09′ and 29°15′ N, 97°32′ and 106°12′ E; Figure 1) is situated in a transitional zone between tropical south-east Asia and temperate Himalayas, and it has a mountainous topography with elevation ranges from 76.4 m at the lowest valley bottom in the southeast (Red River) to 6740 m at the highest mountain summit in the northwest (Figure 2). Yunnan is extremely diverse in habitats and biodiversity. Southern Yunnan with a tropical monsoon climate has a tropical flora of Malaysian affinity (Zhu, 1997, 2008a; Zhu and Yan, 2009a). Central Yunnan with a subtropical climate is largely characterized by a subtropical flora of East Asian affinity (Yan et al., 2009). Northwestern Yunnan, with a temperate climate and alpine-deep valley topography, has a temperate Himalayan flora (Zhu, 2009, 2015). 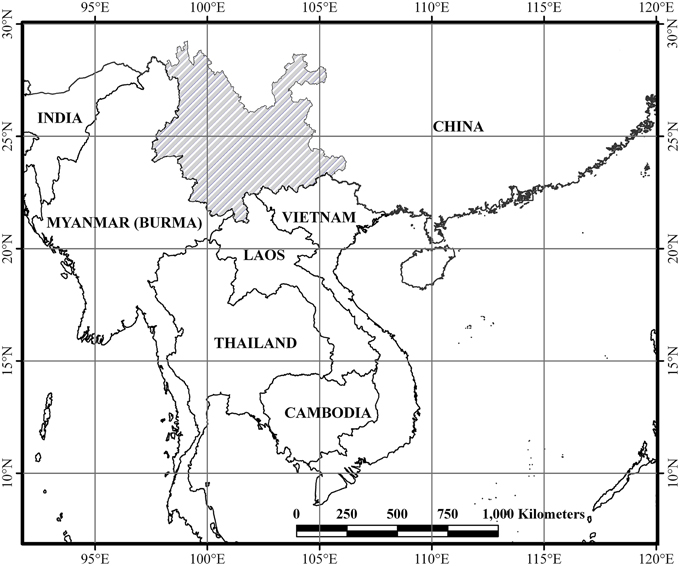 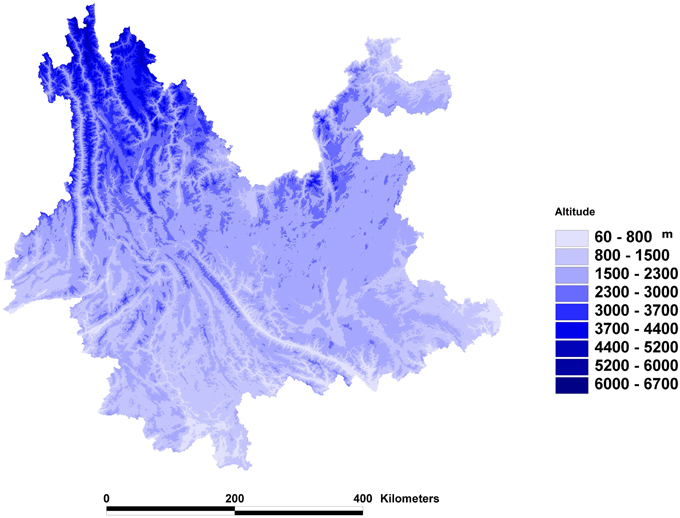 Studies of the floristic patterns of Yunnan seed plants reveal that the majority of genera found in southern, southwestern and southeastern Yunnan are tropical, while the majority of genera found in northern Yunnan are temperate (Zhu, 2008b, 2012). Among the tropical genera, tropical Asian genera are most common. The abundances of these tropical Asian genera show oblique patterns across Yunnan, not latitudinal gradients as they are in southern and eastern China (Zhu et al., 2007).

Biogeographical divergence of the flora of Yunnan was initiated by the uplift of the Himalayas and the extrusion of the Indochina block during the Tertiary (Zhu, 2012). The Indian continent collided with Asia at about 50 Ma (Rowley, 1996) causing uplift of the Himalayas, continuous deformation of southwestern China and a large clockwise rotation and southeastward extrusion of Indochina (Harrison et al., 1992; Funahara et al., 1993; Chen et al., 1995; Leloup et al., 1995). The Simao Terrane, which forms the present west and south parts of Yunnan, has been suggested as one of the prominent fragments of the extruded Indochina block (Sato et al., 1999, 2001, 2007). As a whole, the Simao Terrane was displaced southward by 800 km, together with a clockwise rotation of 30°. The rotation processes were believed active until at least the Miocene (Schärer et al., 1990; Chen et al., 1995). These geological events may thus have affected the evolution of the Yunnan flora. 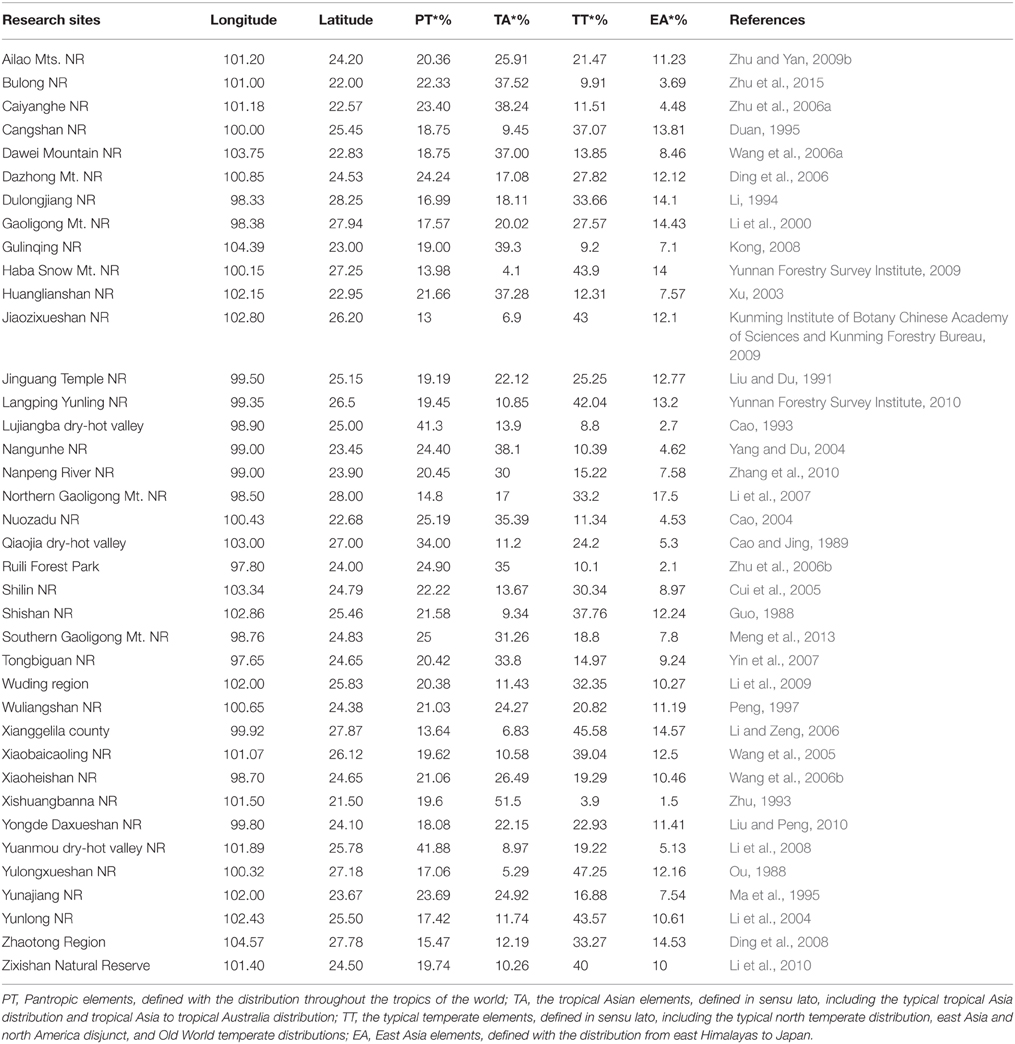 Table 1. The geographical elements at generic level among the sites (regional flora) from references data.

ArcView software was used for making abundance maps of the four geographical elements from the regional floras. The abundances were grouped into three classes, which were classified by natural breaks, with breakpoints between classes identified using Jenk's optimization, a default classification method in ArcViewGIS 3.1 that reduces variance within classes and maximizes variance between them. Graduated symbols were used.

The Simao Terrane, which forms the present west and south parts of Yunnan, was displaced southward by 800 km, together with a clockwise rotation of 30°. The rotation processes were believed active until at least the Miocene. This unique geological history may influence these abundant patterns of dominant geographical elements across Yunnan. Here the abundant patterns of geographical elements across Yunnan were used to discuss the relationship between the floristic geography and geological history of Yunnan. 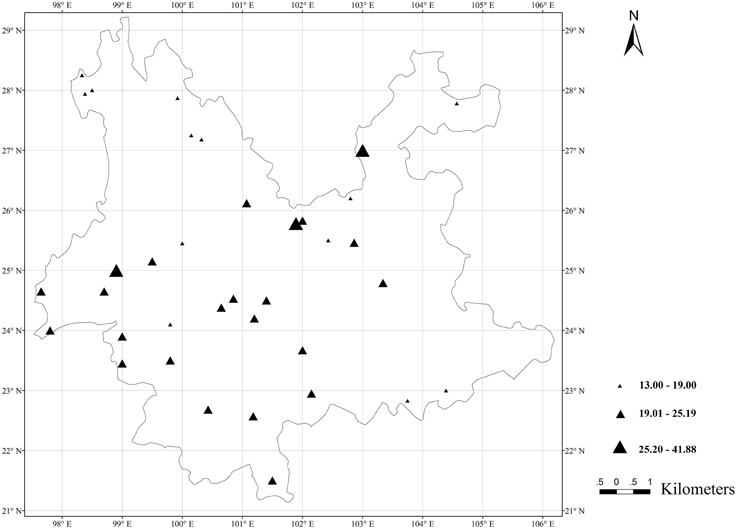 Figure 3. The abundance pattern of the pantropic distributions of geographical elements across Yunnan. 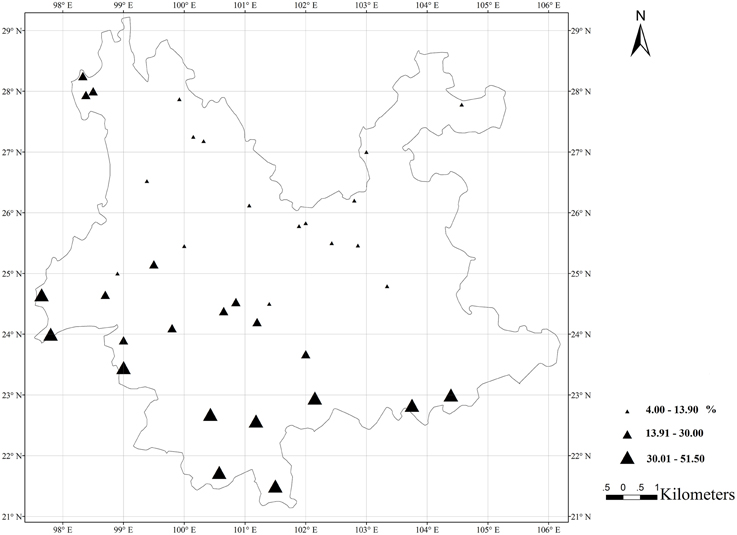 Figure 4. The abundance pattern of the tropical Asian distributions of geographical elements across Yunnan. 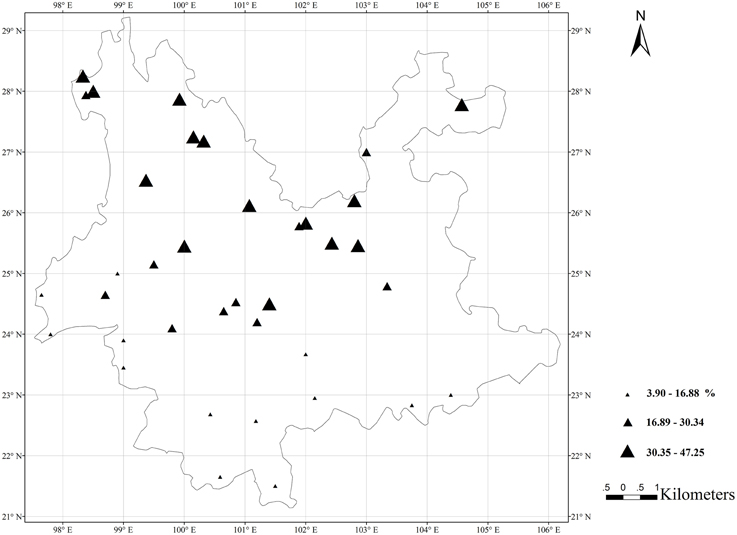 Figure 5. The abundance pattern of the typical temperate distributions of geographical elements across Yunnan. 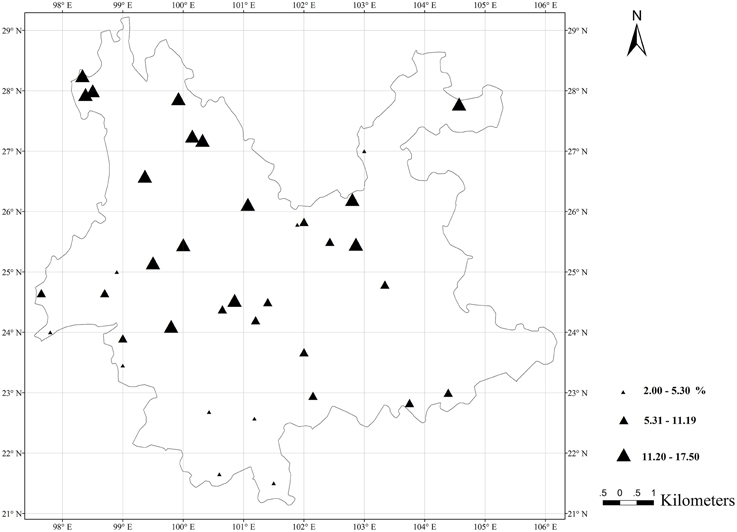 Figure 6. The abundance pattern of the east Asia distributions of geographical elements across Yunnan.

In southern and eastern China, the abundances of tropical Asian genera have high correlations with latitudinal gradients (Zhu et al., 2007; Zhu, 2013). However, the abundances of these genera show oblique patterns across Yunnan, not latitudinal gradients. The tropical Asian genera unusually occur in a much higher percentages in western Yunnan than in eastern Yunnan. They decrease in proportion abruptly in northeast of Yunnan.

These abundance patterns of geographical elements across Yunnan show some correspondence with topography, but if we see the geological history of Yunnan (Figure 7), these abundance patterns correspond well to the clockwise rotation and southeastward extrusion of the Simao-Indochina geoblock. Compared with the distribution patterns of the annual mean temperature (Figure 8) and annual mean rainfall (Figure 9) in Yunnan, the abundances of geographical elements across Yunnan also do not show well correspondence with them as the usual. 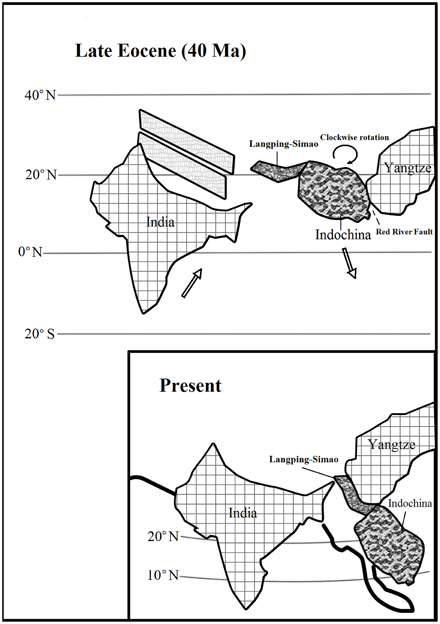 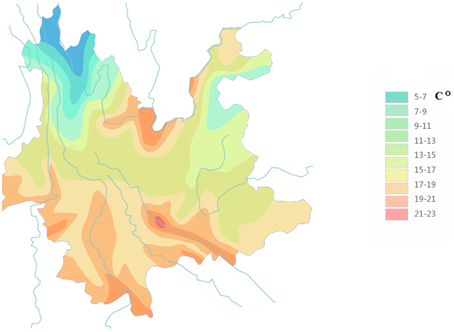 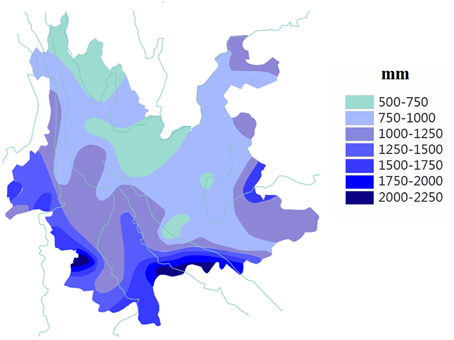 Therefore, we consider that the relatively high proportion of tropical Asian genera in western and southwestern Yunnan matches the clockwise rotation of the Simao Terrane and the southeastward extrusion of the Simao-Indochina geoblock that facilitated migrations of SE Asian plants. These oblique patterns in Yunnan cannot be explained by climate alone, but can be explained at least partly by the geological history.

This research was supported by the National Natural Science Foundation of China, No. 41071040, 41471051, 31170195. The Database was put together by Yan Lichun. Prof. Richard Corlett helped improve the English of the article.

Zhu, H. (2008b). Distribution patterns of genera of Yunnan seed plants with references to their biogeographical significances. Adv. Earth Sci. 23, 830–839.

Copyright © 2015 Zhu. This is an open-access article distributed under the terms of the Creative Commons Attribution License (CC BY). The use, distribution or reproduction in other forums is permitted, provided the original author(s) or licensor are credited and that the original publication in this journal is cited, in accordance with accepted academic practice. No use, distribution or reproduction is permitted which does not comply with these terms.