A Corrigendum on
Magmatic Processes at La Soufrière de Guadeloupe: Insights From Crystal Studies and Diffusion Timescales for Eruption Onset

In the original article, there was a mistake in Table 2 and in Figures 5, 9 and 10 as published. An error occurred in our calculations of the D0 value, which was then propagated into the numerical routines used to perform our calculations. Calculations with the corrected D0 value imply that the timescales of magmatic processes preceding eruptions of La Soufrière de Guadeloupe, shown in Table 2, and discussed in our original manuscript, are lower than previously estimated by a factor of ∼2. The corrected Table 2 and Figures 5 and 9 appear below. The corrected Figure 10 also appears below, and the trend of the figure is not altered.

TABLE 2. Summary table for the eruptions showing the key features for each eruption and sample location.

FIGURE 5. SEM greyscale intensity as a function of traverse location extracted from the SEM image for a sample from the 1010 Cal. CE eruption (blue dots), the data selected for fitting by the model (red dots), and the model solution (black line). Also shown are the fitted parameters (timescale, diffusion coefficient, D, and effective temperature), the theoretical profile midpoint (μ–gray line), and the “goodness-of-fit” (R). The gray shaded area represents the mean ±1 SD of the selected data. 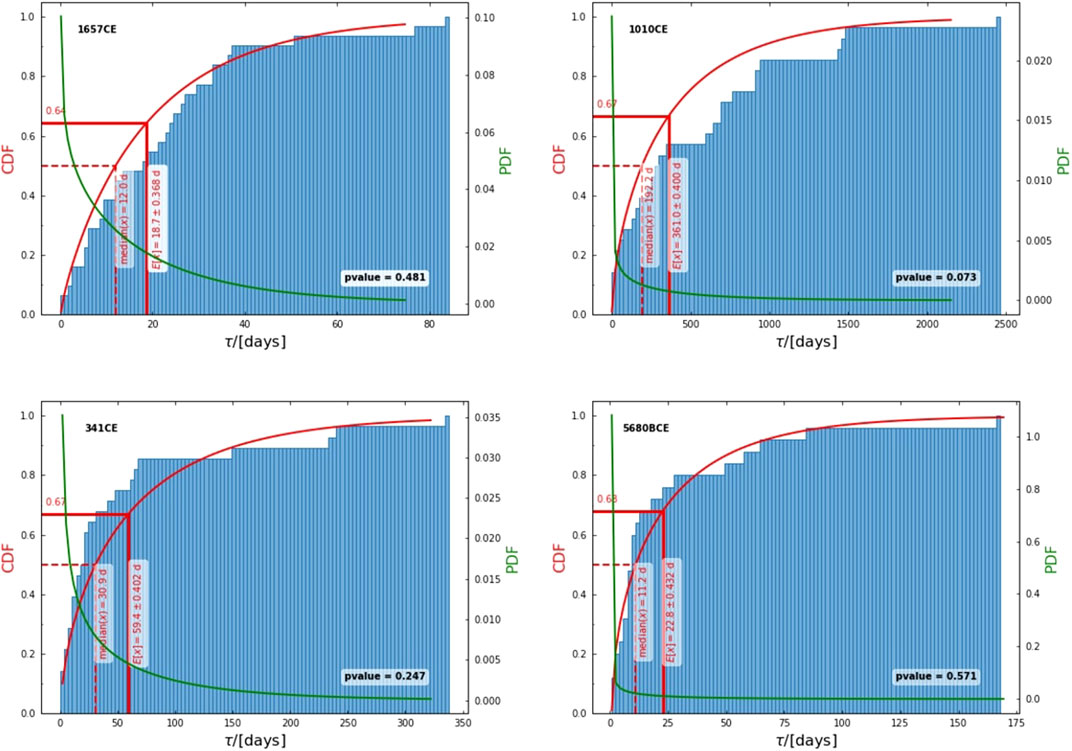 Further errors were made in Figures 11, 12 and 13. The timescales are now corrected in the captions of the figures. The correct timescale values, now presented below, range from 18.8 to 361.0 days confirming that magmatic processes prior to eruption occur on short timescales at La Soufrière de Guadeloupe. Updated and corrected versions of our python scripts are available on GitHub: https://github.com/djessop/mineral_diffusion_timescales. The corrected figures appear below.

FIGURE 12. Maximum, minimum and average timescale values for the different crystal populations recorded in each eruption. For single points, only one crystal was identified. The largest range of values are observed in the simple crystals Type-1 and Type-2; however, this may be a reflection of population size. Type-1 is found in all eruptions and records the shortest timescales. Type-2, is mainly found in the 10101 Cal. CE eruption and records the longest timescales and a large range of timescales. Type-3 has the fewest number of crystals and shows the smallest range of values. While the 1657 Cal. CE, ∼341 Cal. CE and 5680 Cal. BCE eruptions show similar averages, the 1010 Cal. CE eruption shows a higher average and minimal overlaps with the other eruptions. 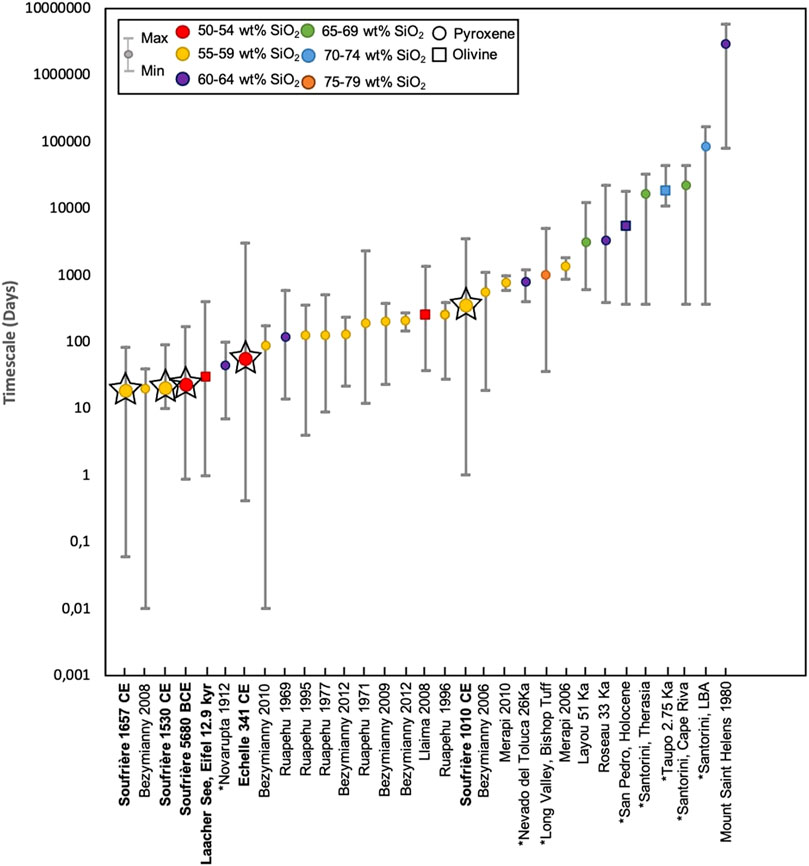 A correction has been made to the Abstract, Paragraph 3:

“We model the timescale populations as random processes whose probability distributions provide expected (“mean”) timescales and the associated standard errors for each eruption. This provides a new statistical method for comparing magmatic timescales between disparate eruptions. From this, we obtain timescales of magma storage at La Soufrière de Guadeloupe ranging from 18.8 ± 0.37 days to 361 ± 0.40 days, with no clear distinction between eruption style/size and timescales observed. Based on these data, magmatic interaction timescales are a poor predictor of eruption style/size.”

A correction has also been made to Section Results, Sub-section Timescale Modelling Results, Paragraphs 1–4:

“Diffusion timescales across the core-rim boundaries for the eruptions studied give a timescale range from <1 to 3,052 days (Table 2). Our method has investigated how the timescale populations are distributed, highlighting clear differences between eruptions, including variations in the maximum values, range of values and expected timescales.

The 5680 Cal. BCE Plinian eruption records short timescales with a range from <1 to 169 days and the expected (mean) timescale calculated as 22.8 ± 0.43 days (Figure 9). The ∼341 Cal. CE Strombolian eruption records a large range of timescales from <1 to 3,052 days. The modelled data yield an expected timescale value of 59.4 ± 0.40 days. This expected value is not comparable to any other eruption studied, though the range of values is comparable.

The 1010 Cal. CE Plinian eruption records the longest timescales from <1 to 2,462 days. These data have an expected timescale value of 361.0 ± 0.40 days, considerably higher than calculated for any other eruption (Figure 9). This eruption is considerably different to the 5680 Cal. BCE Plinian eruption, despite the expectation that these eruptions are comparable. This is a direct consequence of the characteristic crystal populations in the 1010 Cal. CE eruption which shows a large proportion of Type-2 crystals with diffuse zoning, not present in the 5680 Cal. BCE eruption (Figure 8).

A correction has been made to Section Discussion, Sub-section How Do We Interpret the Diffusion Timescales, Paragraph 4:

“These processes are reflected in the gamma distribution, which describes all events that share the same properties (i.e., are generated by the same process) and models them as random processes. In this case, the gamma distribution is derived from the individual likelihood of all intrusion events across the eruption’s crystal populations. The timescale distribution reflects an intrusion producing a mixing bowl where the crystals come into contact with the intrusion at different times, with the expected timescale being the typical value of the distribution. The expected timescale/typical distribution value shows the average time it took a crystal for a specific eruption to come into contact with the intrusion. Therefore, the gamma distribution allows the probability of a crystal experiencing an event at a given time to be estimated. In the case of La Soufrière de Guadeloupe, crystals have a smaller probability of recording a short delay time/longer timescale (on the order of a year; e.g., 1010 Cal. CE), and a larger probability of recording a longer delay time/shorter timescale (on the order of days; e.g., 1657 Cal. CE). This could relate to several parameters including: the intrusions interaction with the system, the composition of the system (including volatile content) and system geometry (crystals recording a longer delay time/shorter diffusion timescale farthest from the intrusion are more likely to be erupted than those closer to the system base which interact with the intrusion first).”

A correction has been made to Section Discussion, Sub-section Which Mush System Processes are the Timescales Related To?, Paragraph 5:

“The ∼341 Cal. CE and 1010 Cal. BCE eruptions have similar maximum diffusion timescales but different expected timescales (Table 2). This indicates while intrusions may begin at similar times prior to an eruption, the diffusion timescale distribution and resulting expected timescales, suggest the intrusions interact differently with the system. A transition in conduit location to Echelle or the eruption of a monogenetic cone may result in different expected timescales of magmatic processes preceding eruptions. In a shallow storage region, crystals interact with melt shortly before eruption and could explain the crystals recording short timescales observed, particularly in Echelle and in other monogenetic systems (Ruprecht et al., 2007; Johnson et al., 2008; Denis et al., 2013; Brenna et al., 2018; Figure 11A,C).”

A correction has been made to Section Discussion, Sub-section How Do the La Soufrière de Guadeloupe Timescales Fit Into a Global Context, Paragraph 3:

“Some systems show magmatic processes occurring on timescales comparable to La Soufrière de Guadeloupe, such as the 1912 eruption of Novarupta (Alaska), which shows similarly short diffusion timescales. A smaller range of timescales are calculated for this eruption, but the average value, 45 days, is comparable to the expected values calculated for the 1657 Cal. CE, ∼341 Cal. CE and 5680 Cal. CE eruptions (Singer et al., 2016). Despite the similarities in the timescales, the Novarupta system is much larger and is more evolved than La Soufrière de Guadeloupe, limiting the comparability.”

A correction has been made to Section Discussion, Sub-section Can We Link Timescales to Unrest at La Soufrière de Guadeloupe?, Paragraph 4:

“In the second scenario, long timescales on the order of a year (i.e., 1010 Cal. CE) suggest similar long unrest periods prior to the eruption could be observed. This unrest, recorded over months or years, may show a gradual increase in seismic activity and thermal anomalies, along with geochemical markers of the rising magma batch, peaking in a shallow degassing signature following its emplacement and the thermal (and chemical) exchange with the residing body. Behaviour corresponding to this scenario was observed prior to the May 2008 Bezymianny eruption, characterised by a decrease of CO2/H2O, S/HCl, CO2/S and CO2/HCl ratios (Lopez et al., 2013; Davydova et a., 2018).”

Finally, a correction has been made to Section Conclusions:

“By investigating a range of eruption styles, we provide an in-depth analysis of the diffusion timescales of magmatic processes occurring at La Soufrière de Guadeloupe and provide new insights in the processes occurring in the mush system. The method constitutes a significant advance for the calculation of orthopyroxene diffusion timescales, eradicating biases induced by fitting the profiles by eye, and optimising data quality by using well-tested and robust numerical schemes and “goodness-of-fit” analyses. The six different crystal population distributions, found across the four various types of eruptions of La Soufrière de Guadeloupe, indicate different eruptions are fed by different mush system lenses, which have distinct histories. We found distinct timescales for similar eruption styles, suggesting the diffusion timescales do not allow us to discriminate between eruptive styles. In detail, we determined expected values of 22.8 ± 0.43 days for the 5680 Cal. BCE Plinian eruption, 59.4 ± 0.40 days for the ∼341 Cal. CE Strombolian eruption, 361.0 ± 0.40 days for the 1010 Cal. CE Plinian eruption and 18.8 ± 0.37 days for the 1657 Cal. CE Vulcanian eruption. The 5680 Cal. BCE and 1657 Cal. CE eruption short timescales correlate to short repose suggesting a magma intrusion hotter than the existing mush moved rapidly through the mush system due to the presence of a magma system with a high proportion of melt. The 1010 Cal. CE eruption long-expected timescale and large range of timescales indicates the system remobilised comparatively slowly with new magma interacting with the system slowly. The majority of timescales calculated in this study are short when compared to global data sets calculated for similar systems. This implies basaltic-andesitic to andesitic volcanoes can rapidly produce large-scale eruptions. Paramount for hazard assessment and crisis response, the lack of a correlation between eruption explosive intensity (VEI) and timescales that also applies to short timescales, indicates that a future eruption of La Soufrière de Guadeloupe could broadly span a range from low to high explosivity. These results underscore the necessity to further: improve the reliability of detecting and interpreting multiparameter monitoring data as eruption precursors, expand eruption forecast modelling, develop probabilistic expert judgement for crisis response, as well as enhance risk reduction and societal resilience.”

Bourgeoisat, C. (2018). Spatio-temporal dynamics of the magmatic reservoir at the origin of the 1530 AD eruption of La Soufrière of Guadeloupe. Paris: Master’s thesis

Copyright © 2021 Metcalfe, Moune, Komorowski, Kilgour, Jessop, Moretti and Legendre. This is an open-access article distributed under the terms of the Creative Commons Attribution License (CC BY). The use, distribution or reproduction in other forums is permitted, provided the original author(s) and the copyright owner(s) are credited and that the original publication in this journal is cited, in accordance with accepted academic practice. No use, distribution or reproduction is permitted which does not comply with these terms.