TSF is a unique industrial structure and also a dangerous source of artificial debris flow with high potential energy (Tang et al., 2012; Detzel, 2016). In recent years, accidents of TSF caused by heavy rainfall or earthquakes have occurred frequently, resulting in loss of lives and property (Moxon, 1999; Jing et al., 2019). Therefore, it is necessary to conduct an in-depth study to improve the prevention and mitigation of TSF disasters. Previous research on tailings dams mainly focuses on environmental pollution, stability analysis, and the mechanical properties of tailings (Nelson, 1977; Finn, 1993; Rico et al., 2008; Yu et al., 2014; Bhuiyan, 2016). Wijewickreme and Lu study the mechanical properties of tailings through indoor geotechnical tests (Wijewickreme et al., 2005; Lu et al., 2019). Proskin analyzes the stability of the tailings dam under a freeze–thaw condition by examining the influence of the freeze–thaw cycle on the permeability of fine tailings (Proskin et al., 2010). Li, Dong, and Yu analyze the stability of the dam body based on the fluid–solid coupling theory and a numerical simulation analysis method (Dong et al., 2011; Li et al., 2012; Yu et al., 2013). They find that the burial depth of the saturation line is too shallow (Figure 1), which is the main reason for the local instability of the dam. Jing (Jing et al., 2019) studies the overtopping failure process of a reinforced tailings dam using a small-scale model test, which finds that the reinforcement layers could improve the anti-erosion capability of the tailings dam. However, these studies are limited to the dam body and do not take into account the flow characteristics of slurry after a dam break. Once a tailings dam breaks, the slurry causes catastrophic damage downstream.

FIGURE 2. The grain-size distribution curve of debris flow and slurry, (A) debris flow, (B) slurry. 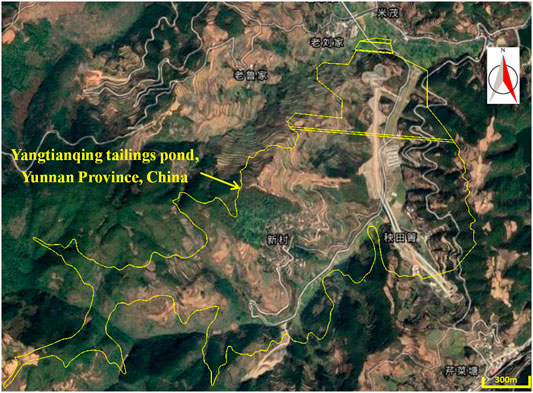 Understanding and analyzing the flow characteristics of slurry are the focus of the present work; a few terms which are used frequently in the paper are defined. These terms set the context for the readers:

Slurry: Mass concentration of tailings, which includes fluid along with sediment.

Tailings: Products of the mineral after ore-dressing practice; its useful mineral content is very low, so it cannot be used in production.

Flow height: The liquid level height from the bottom of the flume as shown in Figure 8.

Slope: The slope with a certain angle as shown in Figure 4A. 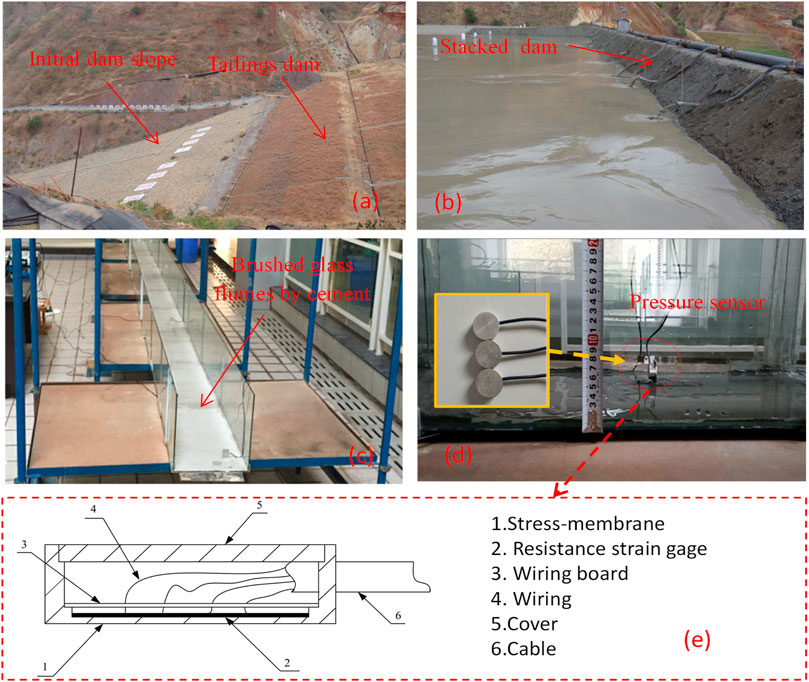 Tailings Dam: The structure of intercepting tailwater in the tailings pond. As shown in Figure 4B, the dam consists of two slopes and one platform. 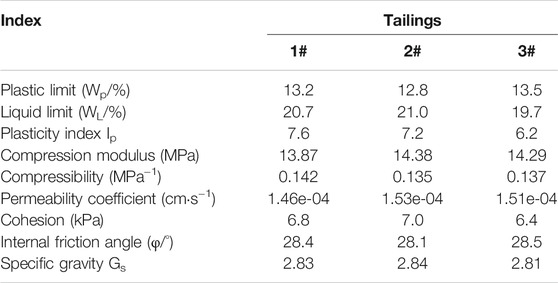 In China, more than 80% of tailings impoundments are built using the upstream method with a thickening of 20%–30% because it is considered to be more economic (Zheng, 2017). High-density thickened tailings (HDTT) discharge can save a lot of water resources, reduce environmental pollution, and improve the utilization of the reservoir. Therefore, more and more HDTT discharge was considered in recent years. The TSF design considered discharge of tailings at 62% solids of Sierra Gorda Sociedad Contractual Minera (SCM), Chile (Engels et al., 2018). So, the four common types of slurry with mass concentrations of 30%, 40%, 50%, and 60% were used for experimental research. The test conditions are shown in Table 2.

Based on the geometric size of the Yangtianqing tailings pond, an SSTDDB is developed in the ratio of 1:400. The kinematic similarity ratio is 1:20. The experimental apparatus (SSTDDB) consists of a reservoir area, downstream gully, slurry mixing system, gate (simulated dam), measurement device for impact force and velocity, flow monitoring system, and slope adjustment device. The panorama of the experimental apparatus (SSTDDB) is demonstrated in Figure 5A. The impact force–measuring device is composed of the pressure sensor (Type: BX-2, Range: 0–10kPa ± 0.5%F.S, Dandong city electronic instrument factory, Liaoning, China), sensor support plate, dynamic strain gauge, and computer as illustrated in Figure 5B. Figure 6 shows the schematic of the gate device and gate lifting device. The highest sampling frequency of the dynamic strain gauge is 1 kHz, and the sampling frequency is 5 Hz. The pressure sensor is fixed on the sensor support plate, and the height from the bottom of the gully is 2 cm. The pressure sensor and measuring rulers are installed at 2 and 4 m away from the dam. To thoroughly explore the flow characteristics of slurry in the downstream gully, the gully is constructed of transparent toughened glass. 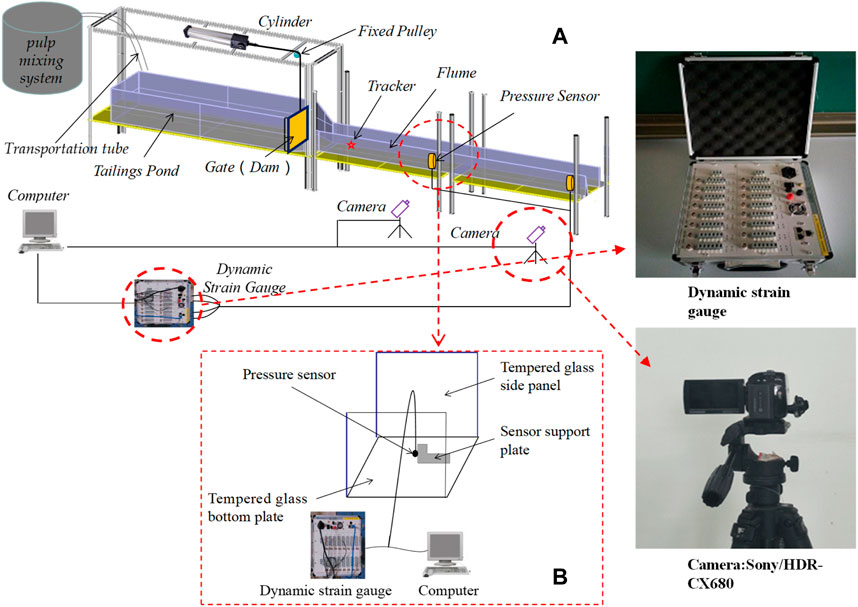 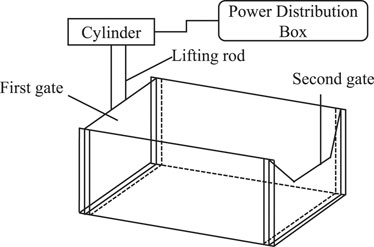 FIGURE 6. The schematic of the gate device and gate-lifting device.

The internal dimension of the tailings pond is 200 × 60 × 50 cm (length × width × height). The dimension of the gully is 400 × 30 × 40 cm (length × width × height). According to the actual topography of the Yangtianjing tailings dam in China, the slope ratio of the gully is set to be 2%, the floor is roughened with cement, and the bed roughness of the gully is calculated by Manning’s formula (i.e.,) and corrected by empirical judgment (Li et al., 2005). Here, is the bed roughness of the gully, is the velocity of slurry at one section, is the hydraulic radius, and is the gradient of the gully. Flow characteristics of fluids are monitored using measuring rulers and high-resolution cameras (Sony/HDR-CX680, Camera resolution: 1920 × 1080/50p, Sony (China) Co., Ltd., Beijing, China). The installation of the measuring rulers is shown in Figure 4D, and the real-time height of the slurry is recorded through the measuring rulers and video. To measure the impact force of the fluid, pressure sensors are arranged at 2.0 and 4.0 m away from the dam layout. Experimental monitoring points and the equipment layout are depicted in Figure 7.

(1) After the slope ratio of the gully is set to be 2%, the pressure sensor, dynamic strain gauge, and computer are connected and the impact force–measuring device is benchmarked so that the data is zero at the start. Moreover, the digital camera is placed in the research section (S1 = 2 m, S2 = 4 m).

The whole experimental procedure is shown in Figure 8. 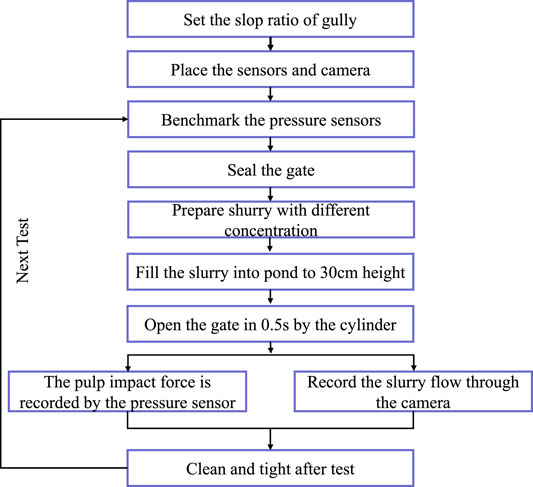 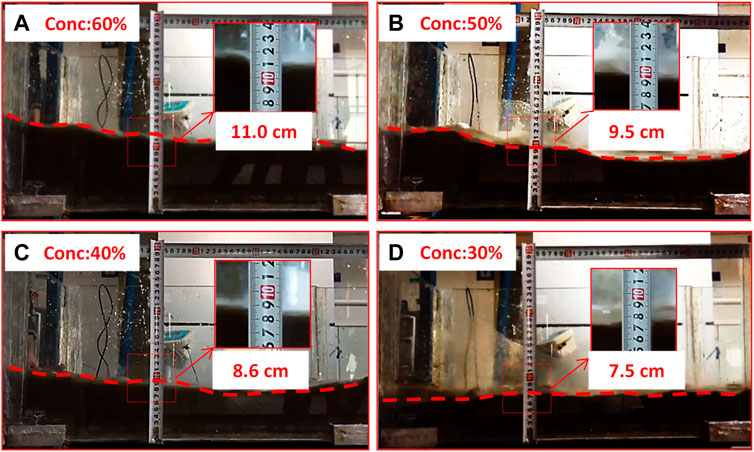 By analyzing the submerged peak of section S1, it is found that the curve of flow height includes two peaks; the first peak is 11.9, 13, 14, and 14.8 cm, and the second peak is 9.7, 10.8, 12, and 13 cm for slurry concentrations of 30%, 40%, 50%, and 60%, respectively. It also shows a submerged peak increase with a slurry concentration in the S1 and S2 sections. The main reason is the viscosity of slurry increases with increasing concentrations of slurry, which can enhance the friction force between slurry and gully; the flow height increased significantly at the S1 and S2 sections.

When the slurry concentration is 60%, in section S1, the first peak reaches 14.8 cm at 2.1 s, and the second peak reaches 13 cm at 3.3 s. As M. Rico (M Rico., 2008) says, the slurry resulting from dam break forms a lower viscosity “water stream” at the front and a higher viscosity “slurry” at the back. The water stream moves faster because of its low viscosity. Therefore, the first peak is formed by a water stream with lower viscosity, and the second peak is formed by slurry with higher viscosity. The flow of slurry in any section can be divided into three stages: stage (A) rapid increase; stage (B) rapid reduction; stage (C) slow decline. The graph of flow height presents a triangular shape, and the conclusion is consistent with that in reference (Xie, 1992). It can also be observed from Figure 10 that the slurry with higher concentration can take less time to reach the same section. It means the evacuation time downstream can increase.

Variation in an Impact Force of the Slurry

Variation in the Velocity of the Slurry

The displacement tracer points are used to record the velocity of the slurry. The tracker and camera record the velocity at two sections S1 and S2. The front velocities at different monitoring points are explained in Table 3. The flow velocity curves of slurry with different concentrations at sections S1 and S2 are shown in Figure 12. (The coordinate origin is the front time of slurry reaching sections S1 and S2.) It is observed that the front velocities of slurry with 30%, 40%, 50%, and 60% slurry concentrations at section S1 are 3.61, 3.3, 3.0, and 2.77 m/s, respectively. This demonstrates that the velocity of the slurry decreases with the increasing concentration. The higher the concentration, the longer time it takes for the slurry to reach downstream. The time for 60% concentration to reach section S1 is 0.5 s longer than the 30% concentration, which is equivalent to an increase of 10 s at the actual site. It can extend the evacuation time in the event of a dam-break accident.

Figure 12 also shows that the instantaneous velocity of slurry decreases with increasing the concentration. The reason is that the concentration can increase the viscosity of the slurry, which makes the slurry consume more energy in the flow process. The velocity curve of the slurry resulting from a dam break can be divided into three stages: stage (A) rapid reduction; stage (B) constant; stage (C) slow decline. Stage (A), rapid reduction in the leading section, is the initial stage when the dam break slurry reaches the characteristic sections. When the slurry reaches downstream, the speed at the front of the slurry is higher, and then it decreases rapidly, lasting about 6.0 s. For stage (B), the stable stage (dragon body), the velocity remains at the stable stage relatively. However, the average duration of velocity is distinctive respectively in different sections. In stage (C), slow reduction (dragon tail), as the flow of slurry from upstream decreases gradually and the energy of slurry from the dragon tail decreases slowly, the velocity of slurry decreases steadily until all slurry flows out of the gully.

TSF is a unique processing subsystem of a mining and mineral processing facility. The slurry resulting from a dam break is hazardous and may cause serious safety and environmental impact. The slurry concentration determines the viscosity and affects the energy conversion of the slurry in the downstream movement. There are thousands of TSFs in China, and the deposit methods of each tailings pond is different; the concentration of tailing disposal is also different. Therefore, the study of disaster damage from different slurry concentrations is significant. Then, the results can provide a detailed understanding of the flow characteristic by slurry concentration influence, which guides the evacuation time and height downstream.

The results provide a detailed understanding of the slurry concentration influence on the flow characteristics, which guides the evacuation time and height downstream.

The handling editor declared a shared affiliation with one of the authors (WW) at time of review.

Copyright © 2021 Chen, Jing, Chen, Pan and Wang. This is an open-access article distributed under the terms of the Creative Commons Attribution License (CC BY). The use, distribution or reproduction in other forums is permitted, provided the original author(s) and the copyright owner(s) are credited and that the original publication in this journal is cited, in accordance with accepted academic practice. No use, distribution or reproduction is permitted which does not comply with these terms.