High-pressure geoscience is the study area on the physicochemical properties of matters at high pressure including the mechanical, thermal, optical, electrical, and magnetic properties of matters as well as the microstructure, equation of state, and phase transition of matters. It also provides theoretical and experimental bases for the discovery of new phenomena, new laws, and the synthesis of new materials at high pressure. The production of static high temperature and high pressure depends on various high-pressure apparatus such as anvil devices including the piston cylinder and diamond anvil cell. Multi-anvil instruments are comprised of the quaternary-plane anvil and senary-plane anvil assemblies. Nevertheless, among various large-volume, multi-anvil static high-pressure assemblies, due to the wide range of temperatures and pressures that can be obtained and the ease of the combination with various in-situ measurement techniques, 6–8 high-pressure assemblies are becoming increasingly important in the fields of Earth and planetary physics, mineralogy, and petrology. The pressure and temperature of 6–8 large-volume high-pressure assemblies can reach up to several tens GPa and 2,500°C, respectively. However, they use solid as a pressure-transfer medium whose internal friction is large. As a result, the pressure calibration of their chamber is required (Baumann, et al., 2015; Klier, et al., 2015; Richter, et al., 2016).

Currently, methods for large-volume pressure calibration can be divided into pressure calibrations at room temperature and high temperatures. The main methods of the pressure calibration at room temperature are the phase transition, the X-ray cell parameter measurement, and the fluorescence manometry. The principle of the phase transition method is to establish the relationship between the chamber pressure and the load by determining the resistance mutation or the metallization pressure transition point of known metals or semiconductors such as Bi, Tl, Cs, Ba, Sn, ZnSe, ZnS, and GaAs. The X-ray cell parameter measurements are used to determine the variation of cell parameters of matters with a known equation of state at high pressure to calibrate the cavity pressure. The fluorescence manometry uses the fluorescence spectral lines of R1 = 694.2 nm and R2 = 692.9 nm of ruby at room temperature and ambient pressure. As the pressure increases, the spectral lines move in the direction of longer wavelengths. The linear relationship between the R1 spectral wavelength and the pressure is dp/dλ = 2.740 ± 0.016 GPa/nm for the chamber pressure calibration (Hülsmans, et al., 2015; Morales, et al., 2015; Wang, et al., 2015; Klemm, et al., 2020; Kosari, et al., 2020).

In this study, the pressure calibration methods commonly used in existing large-volume multi-anvil static high-pressure assemblies were employed to conduct systematic pressure calibration experiments for the hinged 6 × 1,400 t 6-8 high-pressure assembly using various methods. The relationship between the chamber pressure and the oil pressure of this large-volume assembly was established for a specific sample size at different temperatures (Room-T∼1,500°C).

The DS 6 × 1,400 t large-volume assembly was comprised of the pressing body, the oil tank system, and the control system. The pressing body extruded the sample assembly through the pressing anvil. The oil tank system provided the force source to push the pressing anvil. The control system set the temperature and pressure program for the experiment. The six hydraulic cylinders were interconnected by a hinge and all pistons were controlled by the same oil pump. The first-stage anvil was made of tungsten carbide with a Co content of 8 wt% and the edge length was 43.5 mm. The multimeter model used to measure the variation of the resistance of the sample was Agilen-34401A.

The phase transition material used for the pressure calibration at high temperatures was a quartz-coesite with a quartz particle size of 150 um. This was pressed into a sample with a diameter of 2 mm and a height of 2 mm by a press. The samples were assembled as shown in Figure 1. 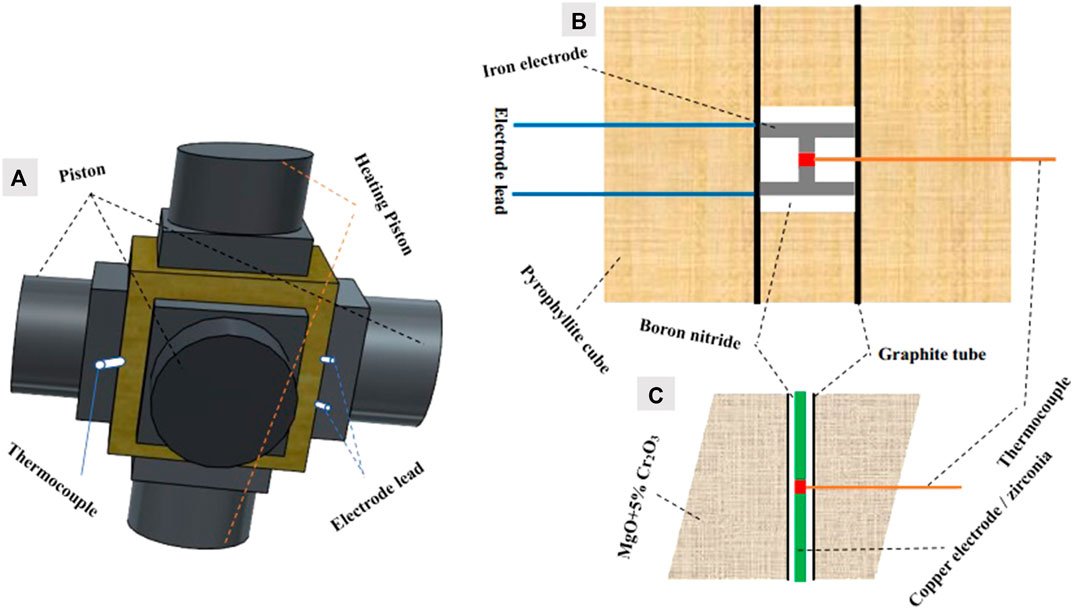 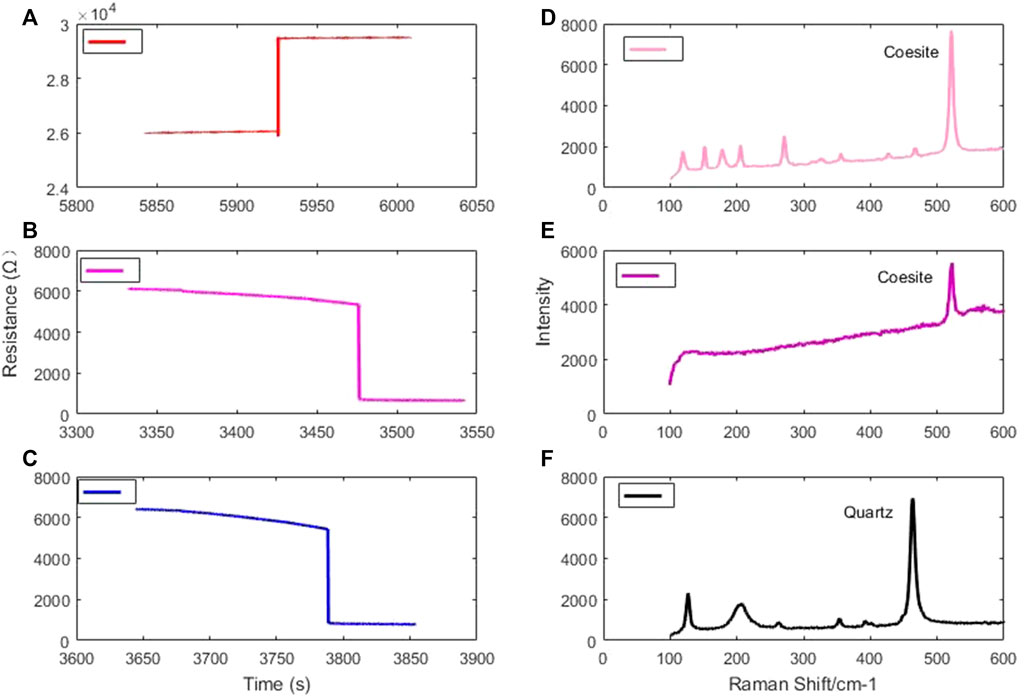 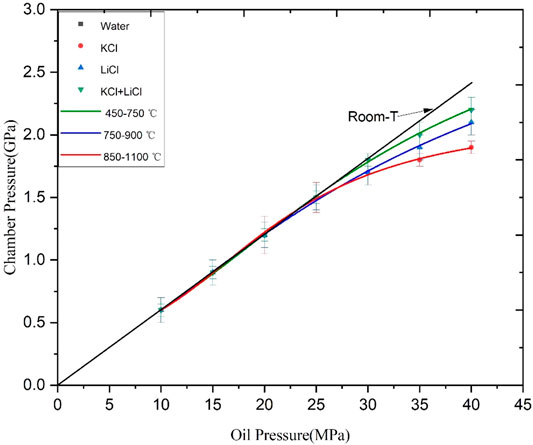 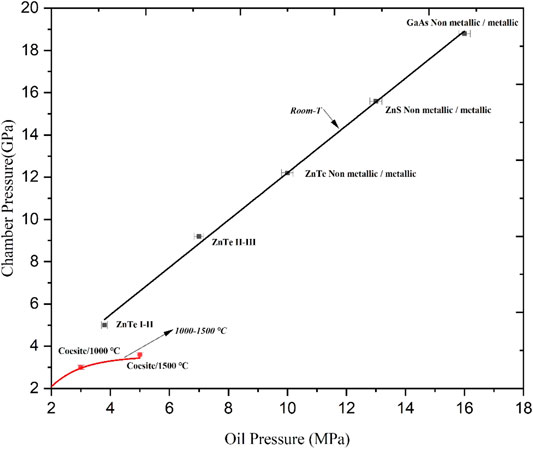 This project is supported by the National Natural Science Foundation of China with Grant No. 42104176.

Copyright © 2022 Ren and Li. This is an open-access article distributed under the terms of the Creative Commons Attribution License (CC BY). The use, distribution or reproduction in other forums is permitted, provided the original author(s) and the copyright owner(s) are credited and that the original publication in this journal is cited, in accordance with accepted academic practice. No use, distribution or reproduction is permitted which does not comply with these terms.

Earth Deep Interior: High-pressure Experiments and Theoretical Calculations from the Atomic to the Global Scale