Rail transportation has evolved over a century to be relatively more efficient than ever (if not the most) around the world. Evidenced qualitatively and quantitatively, social and environmental benefits (combining reduced carbon emission, reduced congestion, reduced traffic mortality, improved urbanization and land uses, increased choices of lifestyle and job, new business capabilities and avenues, etc.) are significant positive outcomes from rail lines (Glaeser, 2009). Although railway transportation operation is one of the least contributors among other modes of transportation (i.e., aviation, cable, land, pipeline, waterway, or even space), the carbon emission from constructing and maintaining railway infrastructure systems is greater than those from other transport infrastructure systems. This is due to the fact that the railway infrastructure system is very complex by nature. It spans over large distance and contains comparatively many more supporting components and larger structural layers to cater safe, resilient and reliable services for either passengers or freights (Kaewunruen et al., 2014; Krezo et al., 2014a, in press; Remennikov and Kaewunruen, 2014). In particular, the routine maintenance and renewal of aging components within the infrastructure are often required in order to assure safety and reliability of passengers and cargoes over the rail networks (Remennikov and Kaewunruen, 2008; Krezo et al., 2014b, in press).

Infrastructure renewal, construction, and maintenance activities are potentially responsible for over 20% of carbon dioxide (CO2) emissions by overall railway functions as a whole, depending on the type of rail infrastructure system, rolling stock, electrification system, traffic operation, and surroundings such as geography and climate (Hill et al., 2011). In recent years, this result has prompted the industry need to systemically estimate and manage greenhouse gas emissions from railway construction and maintenance activities over life cycle. In general, there are two broad types of railway track infrastructure: ballasted and ballastless tracks. Ballasted track uses ballast (crushed aggregates) to support sleepers and rails whilst transferring the train loads to the sub-structure (Burrow et al., 2007; Indraratna et al., 2011). Ballastless track typically uses a concrete slab system to support the steel rails, which transfer the loads from passing trains to the concrete slab and foundation (Kiani et al., 2008). Within a rail infrastructure system, typical mainline components in plain tracks would experience considerably less wear and tear or damage when compared with special trackwork's components such as turnouts, diamonds, or crossovers. However, mainline railway track components deteriorate faster in tight curves, heavy axle loads, adverse weather conditions, and in a poor maintenance condition (Milford and Allwood, 2010). Simultaneously, supporting structures and facilities such as bridges, viaducts, stations, railway equipment, drainage system, electrification systems and so on also deteriorate overtime. As a result, the routine maintenance of railway infrastructure systems, which is an ongoing asset operation activity, is vital in ensuring reliability and longevity of infrastructure (Ueda et al., 2003; von Rozycki et al., 2003; Lee et al., 2008; Network Rail, 2009; Schwarz, 2009; Chang and Kendall, 2011; Krezo et al., in press).

Recent studies suggest that the carbon footprint due to ballasted track maintenance be comparable to that of concrete slab tracks over a 100 year life cycle. The data also exhibits that the emissions of embodied carbon of the materials used in ballasted and concrete slab track re-constructions contribute more than nine times the CO2 emissions from the diesel machineries used to maintain and re-construct the track beds (Krezo et al., in press). The track bed selection and the share of bridges and tunnels have the largest impact on the overall CO2 emissions. Thus, prolonging the re-construction frequency by optimal routine maintenance activities such as rail head grinding, defect removal, and resurfacing, is the key to reducing life-cycle CO2 emissions from overall maintenance over the whole lives of rail assets. Evidenced by a number of turnout renewal projects, it is also considered to be more financially- and carbon-efficient to carry out a bulk renewal (for multiple turnouts) in a single maintenance project than to work separately for each individual turnout (Schwarz, 2009; Chang and Kendall, 2011; Krezo et al., 2014b).

According to a recent review, a strategic framework for enabling carbon-efficient railway construction and maintenance can be illustrated in Figure 1A (Dekker et al., 2012; Kaewunruen et al., 2013). There are three main strategic criteria, which influence the carbon efficiency, including decision making process, physical drivers, and the impact. The impact from metrics, implications, methodologies and priority revolve around the decision-making processes and physical drivers. These multi criteria are also interconnected to socio-technical complexity, which drives the social expectation and value chains through to the shift from and the interaction with other transport modes. 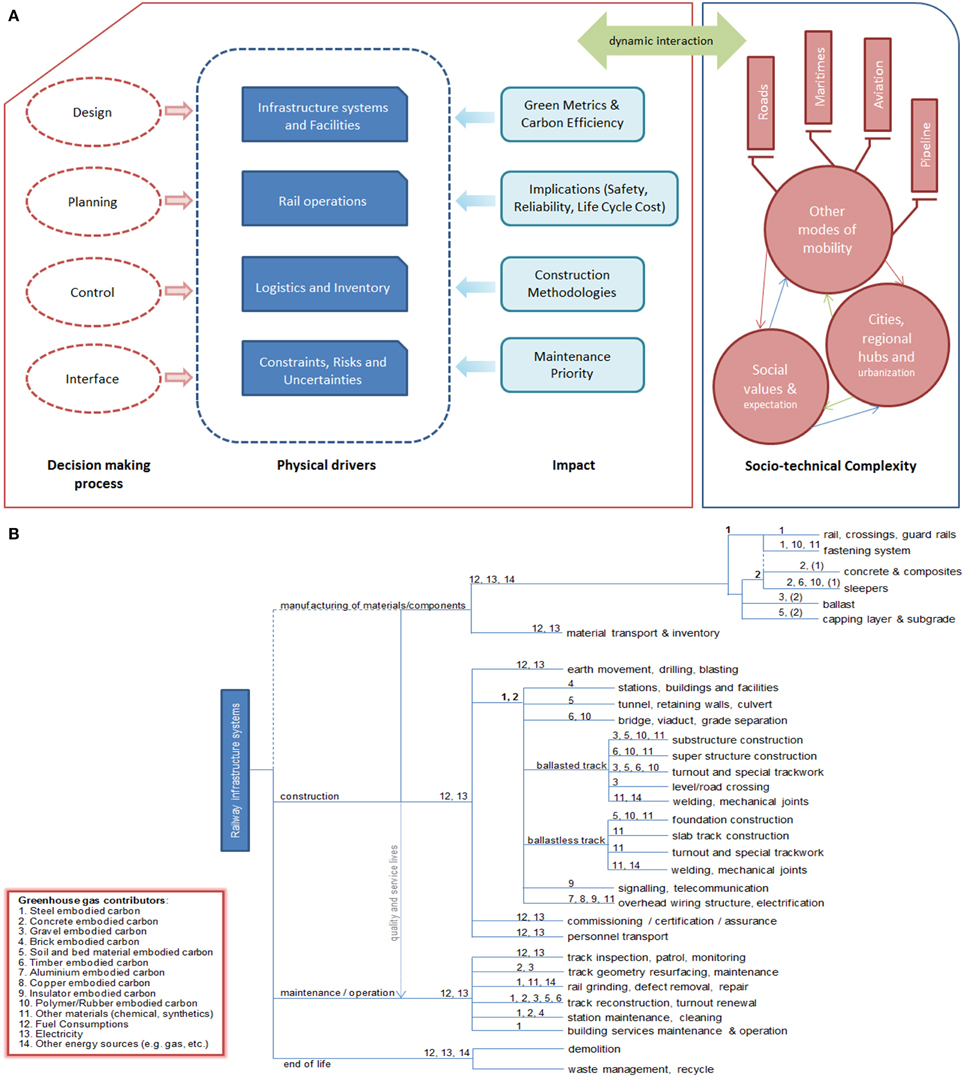 It is likely that climate change and air pollution will become a major criterion in decision making in the next few decades (McKinnon, 2010). The management of railway construction and maintenance has moved from a simple event to a holistic systems-based approach. The carbon drivers in transports behave as a complex adaptive system and it evolves through the inter-connectivity and interaction. Using the evolutionary theory so-called phylogenetic analysis (Neil and Corrigan, 2013), a strategic decision tree, which provides a unique and powerful way of classifying carbon contributors, can be derived as demonstrated in Figure 1B. The technique can highlight a significant influence on the practical guideline for carbon efficiency. This can aid the effectiveness and efficiencies in strategically managing railway infrastructure construction and maintenance and practically allocating carbon-efficient resources, design concepts, or construction methodologies.

It is apparent in Figure 1B that when the appropriate contribution weight of greenhouse gas emission is adopted, practitioners can make strategic decisions to establish carbon-efficient railway infrastructure systems through the construction and maintenance activities. For instance, if the carbon emission by steel and concrete material manufacturing is relatively high in the urban region, the choice of materials, traffic operation and maintenance regime should be designed to prolong the service lives of infrastructure. In addition, with the help of phylogenetic analysis, the emerging carbon contributor can be identified. Accordingly, construction and maintenance managers can allocate appropriate resources and time to manage critical construction phases and materials to achieve financial, social and environmental gains. This would be a great attempt to help reducing carbon emission, which is the main contributor toward climate change that would later aggravate the performance and reliability of railway systems in a long run.

This work was supported by Australian Government's Endeavour Executive Fellowship. The first author wishes to thank the Australian Government' Department of Innovation, Education, and Research for the Endeavour Executive Award, which financially supported his fellowships at Massachusetts Institute of Technology's Department of Civil and Environmental Engineering; Harvard University's John F. Kennedy School of Government; and Chalmers University of Technology's Centre for Railway Mechanics.

Glaeser, E. (2009, August 12). How big are the environmental benefits of high-speed rail? The New York Times. Available online at: http://www.hks.harvard.edu/centers/rappaport/events-and-news/op-eds/how-big-are-the-environmental-benefits-of-high-speed-rail

Copyright © 2015 Kaewunruen, Sussman and Einstein. This is an open-access article distributed under the terms of the Creative Commons Attribution License (CC BY). The use, distribution or reproduction in other forums is permitted, provided the original author(s) or licensor are credited and that the original publication in this journal is cited, in accordance with accepted academic practice. No use, distribution or reproduction is permitted which does not comply with these terms.