A gas chromatographic method for the rapid determination of aqueous carbon dioxide and its speciation into solvated carbon dioxide and bicarbonate is presented. One-half mL samples are injected through a rubber septum into 20-mL vials that are filled with 9.5 mL of 0.1 N HCl. A one mL portion of the headspace is withdrawn and injected onto a gas chromatograph equipped with a thermal conductivity detector. Using the dimensionless Henry's constant for carbon dioxide and an adaptation of the Henderson-Hasselbalch equation, carbon dioxide in the samples can be categorized among solvated, bicarbonate, and carbonate forms. Natural water samples as well as wastewater from a municipal sewage treatment plant and a swine rearing operation were analyzed by this method and the results compared favorably to those obtained by titration. Samples stored for up to 5 weeks showed no significant changes in carbon dioxide concentrations. In addition, using flame ionization and electron capture detectors, methane and nitrous oxide concentrations in the samples were also measured.

Measuring alkalinity and hardness is important in gauging a waters buffering capacity and hence its ability to resist rapid changes in pH due to runoff, rain, and acid spills as well as its potential for scale formation in pipes, pumps, and boilers. Alkalinity is usually reported in bicarbonate equivalents, since calcium and magnesium bicarbonates are usually the most important buffering agents in nature (Boyd et al., 2016). Bicarbonate is also important since it represents the largest pool of carbon dioxide in most waters (Raymond et al., 2008). In karst waters in particular, wherein dissolved carbonate materials cause high concentrations of bicarbonate, the buffering capacity is increased and can have an influence on other water quality parameters and the precipitation of minerals that can impact infrastructure (Ford and Williams, 2007).

The most common means of measuring alkalinity and buffering is by titration of water samples with a weak or strong acid depending on the anticipated buffering capacity of the sample (APHA, AWWA, and WEF, 1998). This requires minimal equipment and gives acceptable results in most cases; however, when a significant portion of the alkalinity is due to other ions such as ammonium, hydroxide, silicates, borates, and phosphates, bicarbonate concentrations may be overestimated. The presence of interference from non-carbonate alkalinity may be assumed based on the shape of the titration curve, however in any case it is recommended that titration be performed with 48 h of sample collection and preferably within 24 h (APHA, AWWA, and WEF, 1998; United States Geological Survey, 2012).

In this paper, we present a rapid and convenient gas chromatographic (GC) method for the determination of bicarbonate buffering in water. It allows for the collection of numerous samples in the field and long term storage for subsequent laboratory analysis. Depending on the capability of the GC instrument other dissolved greenhouse gases may also be analyzed. Since carbon dioxide is measured directly, interference from other contributors to alkalinity is eliminated. We also discuss methods and means by which the accuracy of the technique could be enhanced.

One-half mL of water was withdrawn from the water samples using a disposable syringe equipped with an 18-gauge needle. The syringe needle was used to pierce the septum on a 20-mL headspace vial that was filled with 9.5 mL of 0.1 N HCl. The samples were then analyzed by gas chromatography as described below.

Samples were analyzed for alkalinity as titratable bicarbonate by the Hydroanalytical Lab at Western Kentucky University within 48 h of receipt using standard method 2320 B (APHA, AWWA, and WEF, 1998).

Methane, CO2, and N2O (nitrous oxide) were analyzed on a Varian Model CP-3800 (Agilent Technologies, Santa Clara, CA) GC modified for greenhouse gas (GHG) analysis by RSC Group LLC (Katy, TX). The GC was equipped with a model 1041 on-column injector operated at 75°C and 263 kPa which was connected to a 10-port gas-sampling valve and pressure-actuated solenoid valve. One-half mL of vial headspace was injected using a syringe temperature of 35°C and syringe flush time of 30 s with 250 μL of the sample transferred onto a 1.8 m by 1.6 cm o.d. column packed with 80/100 mesh Hay Sep Q (Varian Associates) with a He flow rate of 55 mL min−1 for methane analysis. The column was connected to a thermal conductivity detector (TCD) operated at 120 °C and with a filament temperature of 200°C for CO2 analysis. From the TCD, the sample went to a flame ionization detector operated under the following conditions: N2 makeup gas 15 mL min−1, H2 30 mL min−1, air 300 mL min−1, temperature 275°C.

Another portion of the sample was split by means of the gas switching valve to another 10 port gas sampling solenoid valve, and a portion of this sample was transferred to a 1.8 m by 1.6 cm o.d. Silicosteel column also packed with 80/100 mesh Hay Sep Q with a N2 carrier flow rate of 55 mL min−1 for N2O analysis. This column was connected to an electron capture detector (ECD) operated at 300°C.

Dissolved GHG and other forms of CO2 (, ) were measured by collecting 0.5 mL water samples using a disposable syringe with 18-gauge needle. The syringe needle was used to pierce the septum on a 20-mL headspace vial that was filled with 9.5 mL of 0.1 N HCl. Gases were analyzed as described below.

Total CO2 (solvated CO2, , and ) concentrations in water were calculated as:

Where 20 equals a multiplication factor to account for the dilution of the sample within the vial, 0.8 equals the dimensionless Henry's constant (KH) for CO2 and Conc equals the CO2 concentration in the gas vial in μg L−1. The sum of the and concentrations were determined by adaptation of the Henderson-Hasselbalch equation (Po and Senozan, 2001):

Where pH equals the pH of the solution and 6.35 equals the pka1 for H2O +CO2↔ +OH−. Carbonate was calculated by the formula:

Aqueous CH4 and N2O (dissolved and suspended gaseous) concentrations in the wastewater were calculated by Equation (1) using dimensionless Henry's constants of 27.02 and 1.1, respectively and molar masses of 16.04 mg mmol−1 and 44.01 mg mmol−1, respectively (Howard and Meylan, 1997; Jacinthe and Groffman, 2001).

Table 1 presents a comparison of the results of alkalinity (as ) tests by GC and titration. In the river and municipal wastewater samples, analysis by GC estimated bicarbonate concentrations to be 81 and 38% higher respectively than did titration. For samples taken from a swine waste storage pit, however, GC results were 3.6% lower than those obtained by titration, possibly due to interferences with alkalinity measurements. In all cases, nonetheless, standard deviations obtained using titration were lower than those obtained by GC. Both analytical methods had acceptable relative standard deviations (RSD) for analytes in the 1,000 parts per million or less range (Taverniers et al., 2004).

Table 1. Alkalinity as equivalents by gas chromatography and titration.

We were limited by our equipment to using 20 mL headspace vials for analysis. Given the difficulty associated with measuring 0.5 mL water solids reproducibly, we feel sure that RSD could be improved by using vials and, hence, larger water aliquots. In addition, our autosampler was not equipped with a vial heater. Henry's constants vary with temperature so that constant vial temperatures could have resulted in lower RSD (DeWulf et al., 1995). Henry's constants also vary with ionic strength but given that samples were diluted 20-fold in the headspace vials, we feel this contributes very little to analysis variation.

While carbonic acid dissociates to a proton and bicarbonate:

The hydration constant (kh) for sCO2 to form H2CO3 in water is low (1.2 × 10−3 in salt water), so that H2CO3 concentrations were considered negligible and were not calculated (Soli and Byrne, 2002).

Solvated methane in the river samples were only about 2 mM (0.3 mg L−1). As expected, they were much higher in municipal water (0.43 mM) and especially swine waste (11.6 mM). In contrast, nitrous oxide concentrations were greatest in river and municipal sewage while it was virtually undetectable in swine waste. This was not unexpected given that nitrous oxide is not formed in anaerobic conditions in the absence of exogenous electron acceptors that sustain anaerobic respiration (Jetten et al., 1999).

No significant changes in measured bicarbonate concentrations were seen in samples over 5 weeks of storage (Figure 1). This is an advantage to titration techniques in that analysis is recommended within 48 h of sample collection and preferably with 24 h. In addition, the samples must be kept cool to minimize loss of CO2 or growth of microorganisms that might affect results (APHA, AWWA, and WEF, 1998). 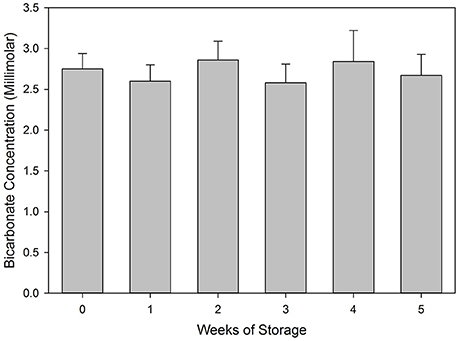 Figure 1. Bicarbonate concentrations measured in samples taken from Meadow Creek at up to 5 weeks in storage. Data represent the mean of six determinations plus standard deviation of the mean.

We thank Zachary Berry for technical assistance. This research was part of United States Department of Agriculture–Agricultural Research Service National Program 214: Agricultural and Industrial Byproducts. Mention of a trademark or product anywhere in this article is to describe experimental procedures, does not constitute a guarantee or warranty of the product by the USDA, and does not imply its approval to the exclusion of other products or vendors that may also be suitable.

Copyright © 2017 Loughrin, Antle and Polk. This is an open-access article distributed under the terms of the Creative Commons Attribution License (CC BY). The use, distribution or reproduction in other forums is permitted, provided the original author(s) or licensor are credited and that the original publication in this journal is cited, in accordance with accepted academic practice. No use, distribution or reproduction is permitted which does not comply with these terms.