University of A Coruña, Spain

Poly(ε-caprolactone) (PCL) nanocapsules have been previously developed as a carrier system for atrazine. However, the efficacy of this nanoformulation against weeds commonly found in crop cultures has not been tested yet. Here, we evaluated the post-emergence herbicidal activity of PCL nanocapsules containing atrazine against Amaranthus viridis (slender amaranth) and Bidens pilosa (hairy beggarticks), in comparison with a commercial formulation of atrazine. For both species, treatment with atrazine-loaded nanocapsules (at 2,000 g ha−1) led to a greater decrease in the photosystem II activity (above 50% inhibition relative to the control) than the commercial atrazine formulation at the same concentration (around 40% inhibition). The growth of A. viridis plants was equally reduced by nanoatrazine and commercial formulation (above 64% for root and 75% for shoot). In the case of B. pilosa, atrazine-loaded nanocapsules decreased more effectively the root and shoot growth than the commercial formulation, leading to a loss of plant biomass. Moreover, for both species, the use of 10-fold diluted atrazine-loaded PCL nanocapsules (200 g ha−1) resulted in the same inhibitory effect in root and shoot growth as the commercial formulation at the standard atrazine dose. These results suggest that the utilization of atrazine-containing PCL nanocapsules potentiated the post-emergence control of A. viridis and B. pilosa by the herbicide. Thus, this nanoformulation emerges as an efficient alternative for weed control.

Due to its slow degradation in natural conditions, the indiscriminate use of atrazine has been associated with contamination of soil and water resources (Khan et al., 2015; Ouyang et al., 2016), which results in deleterious effects on soil microbiota, on plant and animal non-target species and even on human health (Graymore et al., 2001; Dalton and Boutin, 2010; Sathiakumar et al., 2011; Chen et al., 2015). In this context, modified-release systems offer an alternative technique that may reduce environmental contamination by herbicides, as well as increase the efficiency of the bioactive compound (Campos et al., 2014; Prasad et al., 2017).

Different types of nanoparticles have been developed by our group as carrier systems for atrazine, including polymeric nanocapsules and nanospheres (Grillo et al., 2012, 2014a; Pereira et al., 2014), and solid lipid nanoparticles (de Oliveira et al., 2015). In particular, atrazine-loaded poly(ε-caprolactone) (PCL) nanocapsules have emerged as a nanoherbicide with promising applications in agriculture (Grillo et al., 2012, 2014a; Pereira et al., 2014). PCL is a biodegradable, aliphatic polyester used in the production of controlled-release systems, and it is non-toxic in humans and the environment (Woodruff and Hutmacher, 2010).

At the same time, the nanoencapsulation increased the post-emergent herbicidal activity of atrazine against mustard plants, resulting in higher efficiency than the free herbicide. Thus, the dose of the nanoherbicide could be decreased 10-fold without compromising its biological activity (Oliveira et al., 2015a). However, the efficacy of atrazine-containing nanocapsules against weeds found in agricultural cultures has not yet been tested.

Here, we evaluated the post-emergence herbicidal activity of atrazine-loaded PCL nanocapsules against Bidens pilosa (L.) and Amaranthus viridis (L.), comparing it with a commercial formulation of atrazine in order to show the potential use of the nanoherbicides in weed control.

Preparation of the Formulations

Nanocapsules were prepared using the method of interfacial deposition of the pre-formed polymer (Grillo et al., 2012). Briefly, an organic phase (composed of PCL, triglycerides of capric and caprylic acids - Myritol® 318, sorbitan monostearate surfactant—Span® 60, atrazine and acetone) was slowly added, with magnetic stirring, to an aqueous solution of polysorbate 80 surfactant (Tween® 80). After continuous stirring for 10 min, the organic solvent was evaporated until the formulation reached a volume of 10 mL and an atrazine concentration of 1 mg mL−1. As the control, empty PCL nanocapsules were prepared with the absence of atrazine in the organic phase. A commercial formulation of atrazine at 1 mg mL−1 (Gesaprim® 500 CG, from Syngenta) was also used in the herbicide activity assays for comparison.

The atrazine-containing PCL nanocapsules have been previously described by Grillo et al. (2012), showing mean diameter around 260 nm, polydispersity index below 0.2 and zeta potential −30 mV. All these evaluated parameters did not change significantly during the storage (270 days). The encapsulation efficiency of atrazine was very high (86.7 ± 0.7%) and nanoparticles had a spherical morphology. In vitro release kinetics experiments revealed sustained release of ATZ from the nanocapsules, which was governed by relaxation of the polymeric chains (Grillo et al., 2012).

Bidens pilosa L. (Asteraceae) and Amaranthus viridis L. (Amaranthaceae) were used as model weeds in the assays for herbicidal activity. The seeds of B. pilosa were collected from a population of plants at the campus of the State University of Londrina, while the seeds of A. viridis were purchased from Bayer Corporation. In order to break the dormancy, B. pilosa seeds were washed in running water and A. viridis seeds were treated with KNO3 0.2%. The seeds were sown in pots (10.5 cm high, 9.5 cm lower diameter, 14.0 cm higher diameter) containing the substrate described above. The plants were kept in a greenhouse under natural conditions of light and temperature. The experiments were carried out from September to December.

Treatment With the Formulations

The chlorophyll a fluorescence parameters were measured 3 days after treatment using an OS1p fluorometer (Opti-Sciences, Hudson, NH, USA). The maximum quantum yield of the photosystem II was analyzed before dawn in dark-adapted leaves as the Fv/Fm ratio (Baker, 2008). The relative electron transport rate of photosystem II (rETR) was determined at 10:00 am in light-adapted leaves (Baker, 2008). Five plants per treatment were used for chlorophyll fluorescence analysis.

For dry weight determination, roots and shoots were kept at 60°C for 3 days.

As shown in Figure 1, the post-emergence treatment of B. pilosa and A. viridis plants with all atrazine-containing formulations led to drastic reductions in maximum quantum yield (Fv/Fm) (by above 40%) and relative electron transport rate (rETR) of PSII (from 80 to 98%) compared with the water control, as expected for this PSII-inhibiting herbicide (Roman et al., 2007). In comparison with atrazine-containing formulations, unloaded nanocapsules were much less effective in inhibiting PSII photochemistry. In B. pilosa plants, only NC decreased the rETR (by 6.9%), while the Fv/Fm remained unchanged by NC and NC 1/10 treatments. In the case of A. viridis plants, NC decreased the Fv/Fm and rETR by 6.9 and 13.6%, respectively, while NC 1/10 negatively affected only the rETR (9.7% reduction). 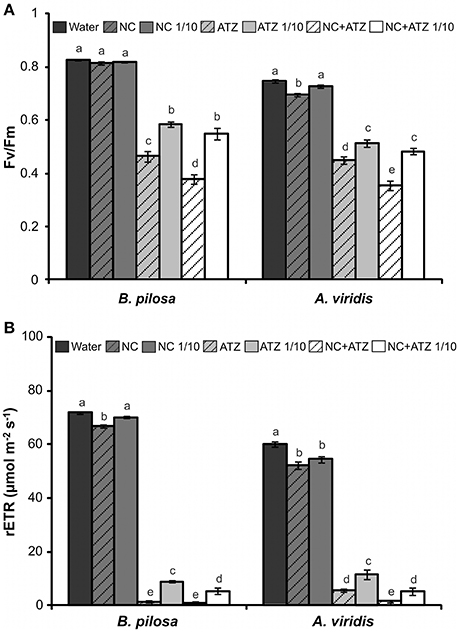 The intensity of Fv/Fm inhibition greatly differed between the atrazine-containing formulations (Figure 1A). In both species, NC+ATZ induced a more pronounced decrease of the Fv/Fm than the other formulations (by 54 and 53% in B. pilosa and A. viridis, respectively, compared to control values). The Fv/Fm was negatively affected by ATZ treatment, but to a lower extent than that of plants treated with NC+ATZ (inhibition of 44 and 40% in B. pilosa and A. viridis, respectively). The Fv/Fm of plants treated with ATZ 1/10 and NC+ATZ 1/10 did not differ from each other.

Regarding the rETR (Figure 1B), in B. pilosa plants NC+ATZ and ATZ led to similar decreases in this parameter (by around 98% relative to water control), while in A. viridis NC+ATZ led to a higher inhibition (97%) of rETR compared with ATZ. In A. viridis, the rETR of plants treated with NC+ATZ 1/10 did not differ from that of ATZ treatment (~91%). For both species, ATZ 1/10 led to lower inhibitions of rETR in comparison with other atrazine-containing formulations (87 and 81% for B. pilosa and A. viridis, respectively).

The growth analysis showed that NC+ATZ induced greater inhibition of B. pilosa root and shoot relative growth rates (RGR) than the other atrazine-containing formulations (Figure 2A). Indeed, the RGR of roots and shoots of NC+ATZ-treated plants was negative (−17.88 and −3.70 mg g−1 d−1, respectively), which indicates a loss of biomass caused only by this treatment. Similar RGRs were observed in plants subjected to ATZ, NC+ATZ 1/10, and ATZ 1/10 treatments. 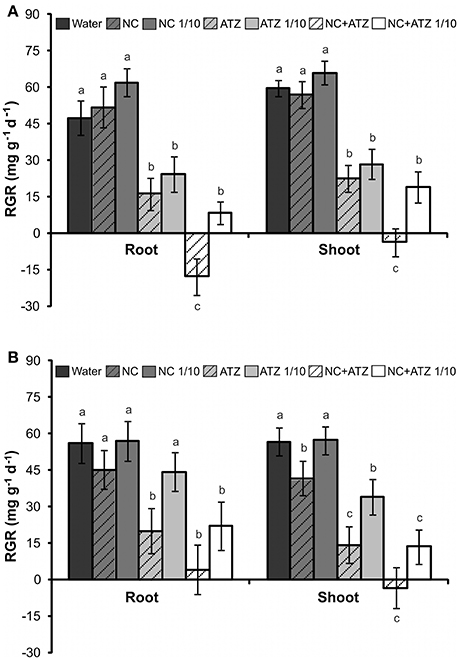 Altogether, the results demonstrate that atrazine-loaded PCL nanocapsules were more effective than the commercial atrazine in the inhibition of growth and physiological parameters of B. pilosa and A. viridis plants. Thus, the nanoencapsulation of atrazine increased its post-emergence herbicidal activity against these weeds, which supports the potential application of this nanoherbicide in the control of different weed species. It is noteworthy that the efficiency of the nanoherbicide was observed regardless of the distinct photosynthetic metabolisms of the weeds (B. pilosa is a C3 plant and A. viridis is a C4 plant).

Given that unloaded PCL nanocapsules led only to minor effects on the analyzed parameters, the increase of the herbicidal activity cannot be explained by a phytotoxic effect of nanocapsule components per se. Conversely, it may be associated with the modified release of atrazine by the nanocapsules, with a better adhesion of the nanoformulation to the leaves or with the uptake of the nanocapsules by the leaf stomates, thereby preventing atrazine loss into the environment and improving the delivery of the herbicide to the target organism (Grillo et al., 2012; Pereira et al., 2014; Oliveira et al., 2015a).

These results of this study corroborate previous phytotoxicity assays in which mustard plants were used as the model target species (Oliveira et al., 2015a). In this study, the post-emergence herbicidal activity of atrazine was also improved by its incorporation into PCL nanocapsules. Moreover, the use of 10-fold diluted atrazine-loaded PCL nanocapsules resulted in the same herbicidal activity against mustard plants as the commercial formulation at the standard atrazine dose (Oliveira et al., 2015a). Similarly, we observed here that ATZ and NC+ATZ 1/10 led to the same inhibitory effect on the growth parameters of B. pilosa and A. viridis. The use of nanoencapsulated atrazine would, therefore, enable the application of lower doses of the herbicide; this could result in reduced release of atrazine into the environment and, in this way, decreased effects on non-target organisms.

Oliveira et al. (2015b) demonstrated that atrazine-containing PCL nanocapsules had no persistent toxic effects on maize plants, a crop where atrazine is widely applied for weed control. Despite small effects on oxidative stress and photosynthetic parameters that were detected in maize leaves after treatment with the nanoherbicide, these effects were transient and shoot growth remained unaffected. These results, together with the reduced toxicity of nanoherbicides compared with free atrazine in non-target organisms, such as Allium cepa, algae and human cells (Grillo et al., 2012; Clemente et al., 2014; Pereira et al., 2014), suggest that atrazine-loaded PCL nanocapsules offer a promising strategy for weed control, without compromising crop growth and with less deleterious effects on the environment.

The development of a sustainable and efficient system of food production with the involvement of nanotechnology may be an excellent strategy for revolutionizing conventional agricultural practices and thus attenuate the negative impacts of agrochemicals on the environment, as well as improving crop yield and increasing food security (Sekhon, 2014; Liu and Lal, 2015). However, some barriers still hinder the effective application of nanomaterials in agriculture, such as the lack of specific regulatory frameworks for ecological risk assessments (Walker et al., 2017) and the perception of the agricultural market concerning the potential of nanomaterials (Kah, 2015).

The cost of production of nanomaterials is also crucial, but promising studies, particularly using natural polymers, indicate that nanomaterials can be obtained in high quantities at low cost (Pérez-de-Luque, 2017). Finally, field experiments evaluating the effects of nanomaterials from sowing to harvest are an essential step in order to nanoformulations effectively reach the agricultural market.

Copyright © 2018 Sousa, Gomes, Campos, Oliveira, Fraceto, Stolf-Moreira and Oliveira. This is an open-access article distributed under the terms of the Creative Commons Attribution License (CC BY). The use, distribution or reproduction in other forums is permitted, provided the original author(s) and the copyright owner are credited and that the original publication in this journal is cited, in accordance with accepted academic practice. No use, distribution or reproduction is permitted which does not comply with these terms.

Environmental impact of nanotechnology: analyzing the present for building the future