Can Overgrazing Responses Be Disentangled by Above- and Below-Ground Traits?

Optimizing ecosystem functions (e.g., productivity and nitrogen retention) has become a challenging task for agro-ecosystem management, as demands for food supply are ever-increasing (Orwin et al., 2018). Grazed land is one of the biggest agro-ecosystems that covers approximately 25% of the terrestrial surfaces on Earth (Asner et al., 2004). Overgrazing has been witnessed to have profound effects on ecosystem dynamics and species composition in grasslands ecosystems, as it leads to significant decrease in diversity, which in turn leads to increased greenhouse gas emissions and nitrogen loss, reduced productivity, water quality and lower soil carbon (C) storage (Ward et al., 2016; Zhou et al., 2017; Liu et al., 2018). Understanding of functional traits that capture responses of species to overgrazing can help in understanding vegetation composition dynamics. This in turn requires better understanding of above- and below-ground traits that respond to overgrazing as compared to landscapes that are not overgrazed (Orwin et al., 2010; Mouillot et al., 2011). Thus, use of the key functional traits that can capture species-specific response to overgrazing can help in selecting species to restoration from overgrazing (Orwin et al., 2018).

We hypothesize that after overgrazing, perennial species might largely get removed, whereas annual species could largely get promoted. Thus, annual and perennial species may alter their above- and below-ground traits for responding to overgrazing. To test this hypothesis, we determined how parameters of above- and below-ground traits of species dwelling in fenced and overgrazed meadows differed across annual and perennial life-forms. We investigated an area of ∼200 square kilometers, across an elevation of 3000–3600 m in Qinghai-Tibetan plateau. Overgrazing has led to nearly half million square km of degraded grasslands that account for the one-third of the total alpine grassland cover on Qinghai-Tibetan Plateau (Cui and Graf, 2009). Finding out the key above- and below-ground traits that can classify vegetation composition between overgrazed and fenced meadows can help in effective sustainable ecosystem managements and restoration from overgrazing in Qinghai-Tibetan Plateau.

The maximum carrying capacity for cold season is approximately two yaks per hectare on Qinghai-Tibetan Plateau (Dong et al., 2015). Four overgrazed meadows in an area of ∼ 200 square kilometers were studied along an increasing elevation ranging from 3000 to 3600 m above mean sea level in the eastern part of the Qinghai-Tibetan Plateau. These meadows have undergone overgrazing at a comparable intensity as they have been overgrazed by approximately the same number of yaks (approximately four yaks per hectare) in winter season every year, for nearly 30 years. These four overgrazed meadows were distributed in Hezuo City, Gansu province (34°°5′N, 102°42′E; 3000 a.s.l.), Maqu County Gansu province (34°0′N, 102°44′E; 3400 and 34°5′N, 102°10′E 3600 a.s.l.), Ruergai County, and Sichuan province (34°1′N, 102°43′E; 3200 a.s.l.) of China (Figure 1A). The histories for the overgrazed meadows were obtained by interviewing local farmers. All overgrazed meadows are characterized by a cold and dry climate; with a mean annual temperature of 2.4–3.2°C. Mean annual precipitation of 530 to 560 mm is primarily distributed from July to August. The local vegetation in overgrazed sites is dominated by herbaceous species, such as Ajania tenuifolia, Swertia tetraptera, and Taraxacum mongolicum (Zhang et al., 2013). Soils are classified as alpine meadow soils (Zhang et al., 2018). 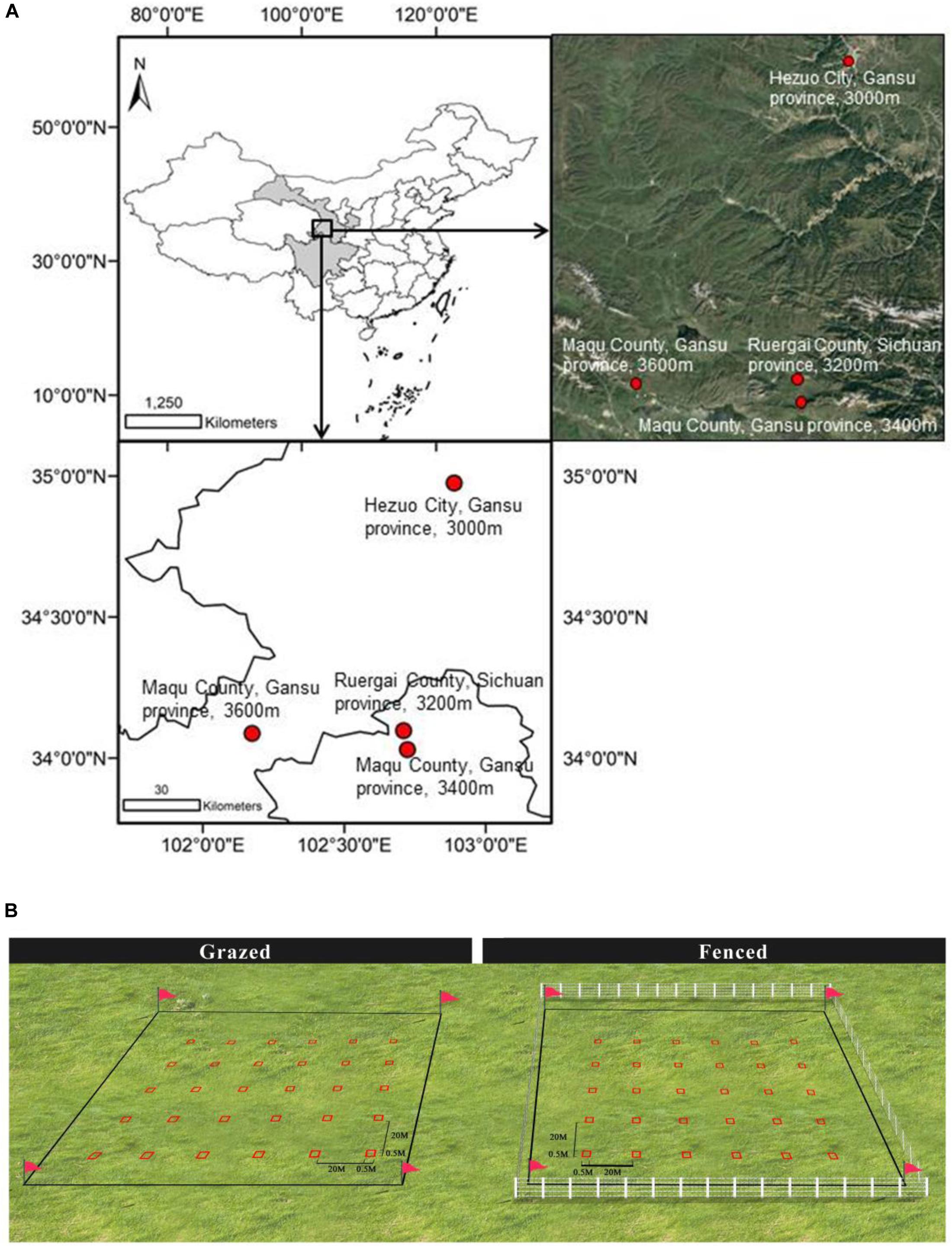 Figure 1. The topographic map of the four study sites along an increasing elevation ranging from 3000 m to 3600 m above mean sea level in the eastern part of the Qinghai-Tibetan Plateau, China (A), and the quadrat sampling design (B). At each site, there was one overgrazed and one matched fenced meadow and 30 0.5 m × 0.5 m quadrats ware randomly arranged in both overgrazed and fenced meadows (B).

Since year 2000, the Chinese government has established fences to protect some areas of overgrazed meadows. Thus, in each elevation, there are also fenced meadows and the fenced meadow has been protected from grazing for nearly 17 years. The climate and soil type of each fenced meadow are the same as each overgrazed meadow. However, the local vegetation in fenced sites in 3000 and 3200 m elevations (sub-alpine meadow) are dominated by herbaceous species, such as Elymus nutans, Kobresia pygmaea, Scirpus pumilus, and Thermopsis lanceolata (Zhang et al., 2018). In contrast dominating species in fenced sites in 3400 m and 3600 m elevations (alpine meadow) are Scirpus pumilus, Kobresia capillifolia, Festuca ovina, Poa poophagorum, Roegneria nutans, and Kobresia macrantha (Chu et al., 2007).

At each elevation, we adopted paired-sampling method to use the fenced meadow which has been constructed since 2000 for preventing grazing and its adjacent overgrazed meadow for comparison (Figure 1B). Sampling was conducted in August, during the peak of the growing season in 2017. At each of the four elevations, 30 plots, each of 0.5 m × 0.5 m, were arranged along four parallel transects in the fenced area and the adjacent overgrazed area of one meadow, with a 20 m spacing between the closest edges of the two areas (Figure 1B). The plots were spaced at 20 m intervals. For each of the 30 plots, species presence/absence was recorded. Total above-ground biomass of each species in each of the 30 plots was also measured to represent abundances (numbers of individuals) for each species to determine whether overgrazing change the dominance of annual and perennial species.

Measurement of Above-Ground and Root Traits of Plants

First, we utilized non-parametric analysis (a Wilcoxon signed-rank test) to test whether there were differences in the above- and below-ground traits and abundances for all common species shared between fenced and overgrazed sites at all four elevations using. Next, a Spearman correlation test was used to examine the bivariate relationships among all above- and below-ground plant traits at all elevations. Finally, a principal component analysis (PCA) was employed to evaluate which of the eight above-ground and root traits play an important role in species distribution between fenced and overgrazed meadows at all elevations. Given the unique set of traits between annual and perennial plant species (Roumet et al., 2006; Zhang et al., 2018), the above analyses were also performed separately for annuals and perennials to understand whether the response of above- and below-ground traits to overgrazing vary between annual and perennial species.

All shared species had significantly lower root biomass (RB), root average diameter (RD), root tissue density (RTD), and above-ground maximum height (H) in the overgrazed meadows than those in the fenced meadows at all four elevations. In contrast, overgrazed meadows had higher specific root length (SRL), specific root area (SRA), leaf photosynthesis rate (A) and specific leaf area (SLA) than those in the fenced meadow (Figure 2). Consistent results could still be observed in perennial species, when we performed Wilcoxon signed-rank test separately for annuals and perennials (Figure 2). However, for annual species, differences in all above-ground and below-ground traits between fenced and overgrazed meadows were not significant (Figure 2).

Figure 3. The interrelationships among above-ground traits (H, A, and SLA) and below-ground traits (RD, RB, SRL, SRA, and RTD) in fenced and overgrazed meadows for all species (upper panel), and separately for annuals (middle panel) and perennial species (lower panel) from 3000 to 3600 m elevations. 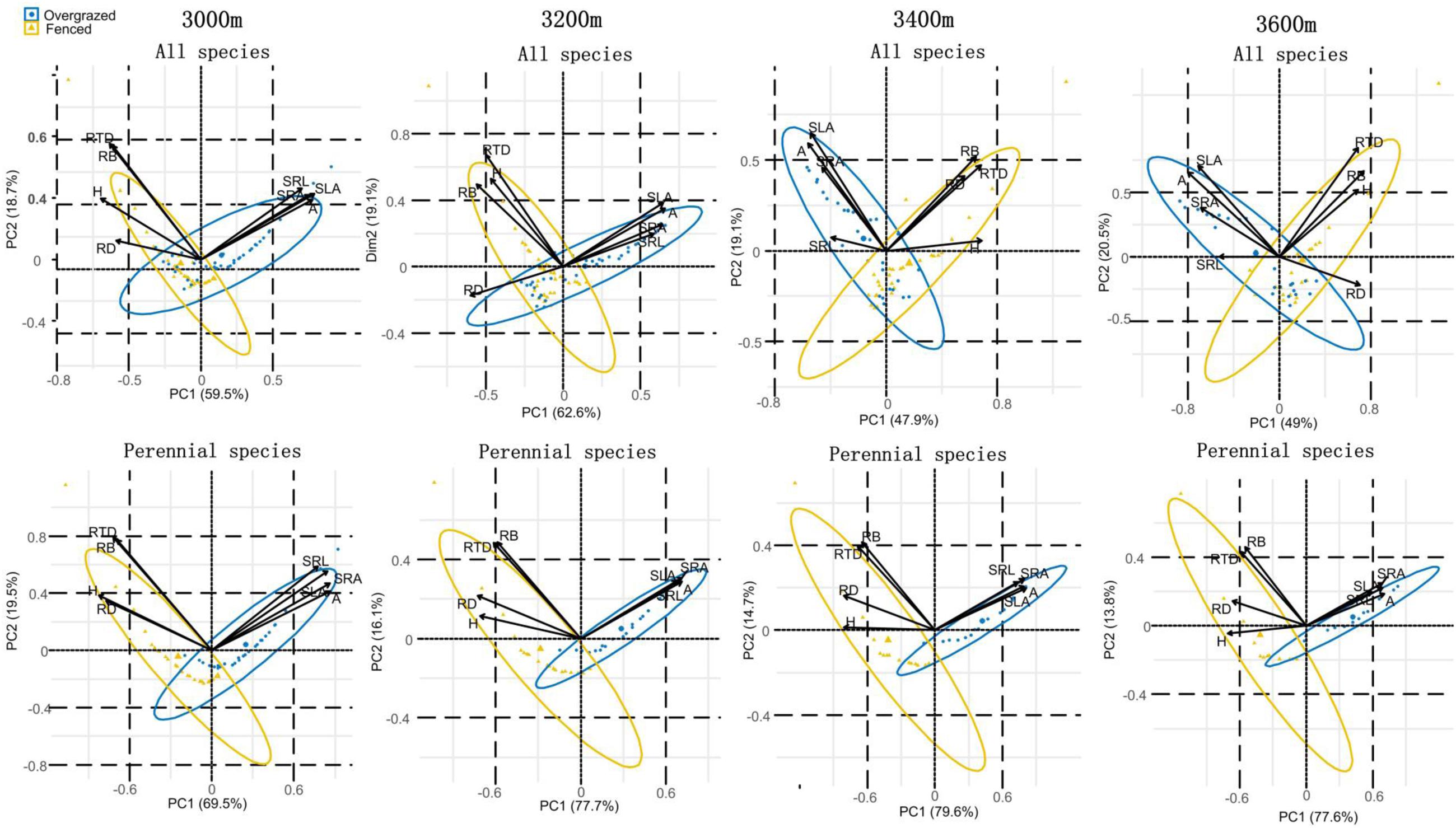 Figure 4. Principal component analysis of below-ground (RD, RB, SRL, SRA, and RTD) and above-ground traits (H, A, and SLA) in fenced and overgrazed meadows for all species, and separately for perennial species from 3000 to 3600 m elevations.

Principal component analysis revealed that fenced and overgrazed species were significantly separated, which in turn was significantly positively associated with SRL, SRA, A, and SLA, but negatively related RD, RB, RTD, and H. High SRL, SRA, A, and SLA represents high resource acquisition, whereas, high RD, RB, RTD, and H indicates high resource conservation (Wright et al., 2004; Reich, 2014; de la Riva et al., 2018). Thus, the shift from resource conservation to resource acquisition determines the classification of species between fenced and overgrazed meadows. These results together indicate that above- and below- ground traits studied here can capture the key plant response (a shift from resource conservation to resource acquisition) and thus help plants to avoid overgrazing. As a result, these traits can be used to select potential species to re-design overgrazed meadows for restoration in Qinghai-Tibetan Plateau.

HZ, SP, and CW designed the research. HZ, QH, and KJ performed the research. HZ and SP analyzed the data and wrote the manuscript. All authors contributed critically to the drafts and gave final approval for publication.

This work was funded by Scientific Research Project of Ecological Restoration of Baopoling Mountain in Sanya, the National Natural Science Foundation of China (41905094 and 41991285) and a start-up fund from Hainan University [KYQD (ZR) 1876].

The Supplementary Material for this article can be found online at: https://www.frontiersin.org/articles/10.3389/fevo.2021.573948/full#supplementary-material

Copyright © 2021 Zhang, He, Pandey, Jiang and Wang. This is an open-access article distributed under the terms of the Creative Commons Attribution License (CC BY). The use, distribution or reproduction in other forums is permitted, provided the original author(s) and the copyright owner(s) are credited and that the original publication in this journal is cited, in accordance with accepted academic practice. No use, distribution or reproduction is permitted which does not comply with these terms.