Erysimum (Brassicaceae) is a genus of more than 200 species (Al-Shehbaz, 2012). It is widely distributed in the Northern Hemisphere and has been the focus of active research in ecology, evolution, and genetics (Gómez and Perfectti, 2010; Gómez, 2012; Valverde et al., 2016). Despite long-standing interest in Erysimum, its taxonomy has yet to be properly established, partly due to a complex and reticulated evolutionary history that renders phylogenetic reconstructions highly challenging (Ancev, 2006; Marhold and Lihová, 2006; Abdelaziz et al., 2014; Gomez et al., 2014; Moazzeni et al., 2014; Züst et al., 2020).

The Baetic Mountains (South-Eastern Iberia) are among the most critical glacial refugia in Europe. The waxing and waning of plant populations following climatic fluctuations have likely complicated the distribution and genetic variation of extant diversity in this region. Isolation and posterior secondary contact between taxa may have favored hybridization and introgression (Médail and Diadema, 2009). The Erysimum species that inhabit these mountains have been a particularly fruitful system for plant evolutionary ecology [e.g., Gómez et al., 2006, 2008; Gómez and Perfectti, 2010; Gómez, 2012; Valverde et al., 2016]. However, the relationships among these species remain unresolved, hampering comparative and evolutionary studies. Genome duplications, incomplete lineage sorting, and hybridization have compromised the phylogenetic reconstructions within Erysimum (Marhold and Lihová, 2006; Osuna-Mascaró, 2020). Additionally, clarifying this group's complex evolution requires extensive genomic resources, which are currently being produced but are mostly lacking.

Here, we report the annotation of 18 floral transcriptomes assembled de novo from total RNA-Seq libraries and nine chloroplast genomes from seven Erysimum species inhabiting the Baetic Mountains. The chloroplast genomes were assembled from total RNA-Seq data following a previously-validated reference assemble approach (Osuna-Mascaró et al., 2018). The data presented here represent reliable genomic resources for transcriptomic, proteomic, and phylotranscriptomic studies. These data contribute to the ecological and genetic resources available for Brassicaceae in general and the genus Erysimum in particular, being the only genomic resources for these species coming from flower buds.

Generation of the Datasets

We sampled flower buds at the same development stage (completely developed non-open buds) from three different populations of Erysimum mediohispanicum, E. nevadense, E. popovii, and E. baeticum, four populations of E. bastetanum, and one population of E. lagascae, and E. fitzii (see Supplementary Table 1 for details). We stored the samples in liquid nitrogen and maintained them in an ultra-freezer (−80°C) until RNA extraction. Then, we extracted RNA from the buds under highly sterile conditions. The buds were snap-frozen in liquid nitrogen and ground with mortar and pestle. We used the Qiagen RNeasy Plant Mini Kit, following the manufacturer's protocol, to extract total RNA and their quality and quantity were checked using a NanoDrop 2000 spectrophotometer (Thermo Fisher Scientific, Wilmington, DE, United States) and with an Agilent 2100 Bioanalyzer system (Agilent Technologies Inc). Library preparation and RNA sequencing were conducted by Macrogen Inc. (Seoul, Korea). We used rRNA-depletion (Ribo-Zero) for mRNA enrichment and to avoid sequencing rRNAs. Library preparation was performed using the TruSeq Stranded Total RNA LT Sample Preparation Kit (Plant). The sequencing of the 18 libraries was carried out using the Hiseq 3000-4000 sequencing protocol and TruSeq 3000-4000 SBS Kit v3 reagent, following a paired-end 150 bp strategy on the Illumina HiSeq 4000 platform. A summary of sequencing statistics appears in Supplementary Table 2.

To assemble contigs from the resulting high-quality cleaned reads, we followed a de novo approach using Trinity v 2.8.4 (Grabherr et al., 2011), due to the absence of an available published assembled genome for Erysimum at the time of the analyses. Each library was normalized in silico before assembly to validate and reduce the number of reads using the “insilico_read_normalization.pl” function in Trinity (Haas et al., 2013). Then we used the parameter “min_kmer_cov 2” to eliminate single-occurrence k-mers that are heavily enriched in sequencing errors, following Haas et al. (2013). Thus, only k-mers that occur more than once were considered for contigs. Candidate open reading frames (ORF) within transcript sequences were predicted and translated using TransDecoder v 5.2.0 (Haas et al., 2013). We performed functional annotation of Trinity transcripts with ORFs using Trinotate v 3.0.1 (Haas, 2015), an annotation suite designed for automatic functional annotation of de novo assembled transcriptomes. Sequences were searched against UniProt (UniProt Consortium, 2014), using SwissProt databases (Bairoch and Apweiler, 2000) (with BLASTX and BLASTP searching and an e-value cutoff of 10). We then used the Pfam database (Bateman et al., 2004) to annotate protein domains for each predicted protein sequence. We also annotated the transcripts using the databases eggnog (Jensen et al., 2007), GO (Gene Ontology Consortium, 2004), and Kegg (Kanehisa and Goto, 2000). We obtained between 104K and 382K different Trinity transcripts after assembling, producing between 66K and 235K Trinity isogenes. The total assembled bases ranged from 92 Mbp (in Em21 population of E. mediohispanicum) to 319 Mbp (in En10 population of E. nevadense). The summary statistics of the assembled transcriptomes appear in Supplementary Table 4. Among the annotated unigenes, the highest proportion was annotated using BLASTX search against the SwissProt reference database, and the number of genes annotated ranges between 71,606 (E. nevadense, En12) and 197,069 (E. baeticum, Ebb10); mean value 146,314.35. The unigenes from the assembled sequences using different databases are shown in Supplementary Table 5. 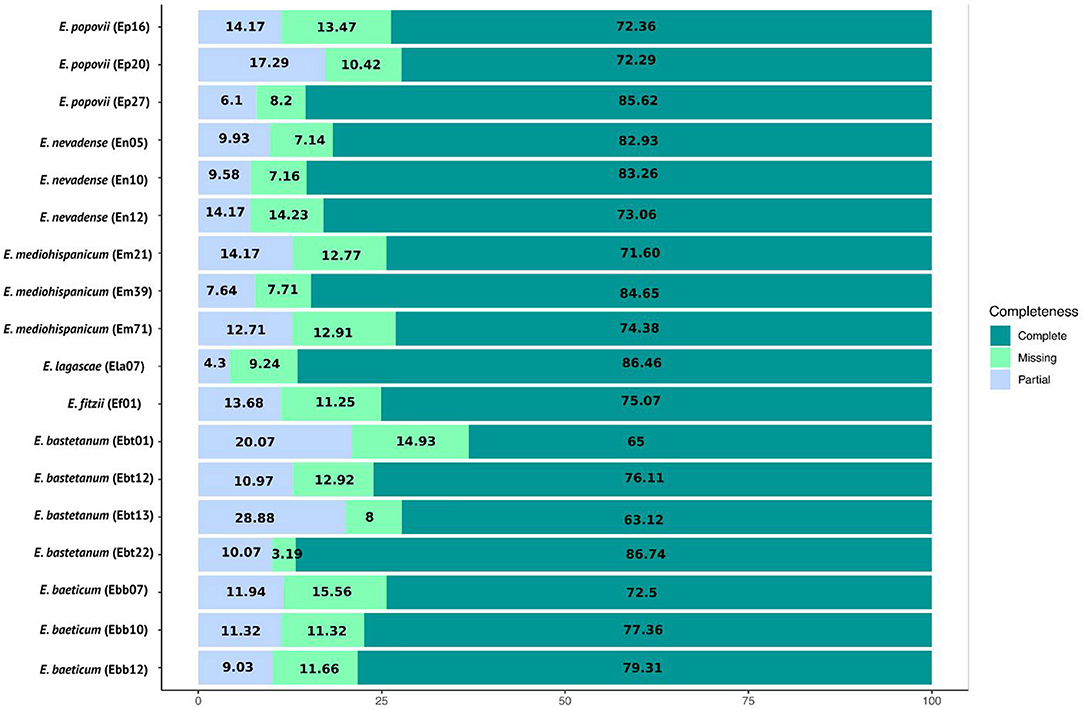 We aligned the chloroplast sequences using MAFFT v.7 with default parameters (Katoh and Standley, 2013). Then, we reconstructed a time-calibrated phylogeny using Beast 2.0 (Bouckaert et al., 2014), with Arabidopsis thaliana chloroplast genome sequence (NC_000932.1 (Sato et al., 1999)) as an outgroup. We made three different partitions: one for coding regions, one for non-coding regions, and the last for the third positions of the coding regions, for which substitutions are synonymous. We calibrated using an average mutation rate reported for synonymous sites of chloroplast genes of seed plants (1.2–1.7 × 109 substitutions/site/year) (Graur and Li, 2000) applying it for the partition of the third position region. In addition, we included a timed-calibration obtained from the literature. In Moazzeni et al. (2014) the divergence of Western European Erysimum species was estimated in the middle Pleistocene (2.43 – 0.74 Mya, using a fast substitution rate; or 8.48 – 2.15 Mya, using a slow substitution rate). Here, we used the average of these dating intervals (2.43 and 2.15 Mya) as a calibration point (2.29 Mya). The Bayesian search for tree topologies and node ages was conducted during 20,000,000 generations in BEAST using a strict clock model and a Yule process as prior. MCMC was sampled every 1,000 generations, discarding a burn-in of 10%. We checked the MCMC trace files generated using Tracer v1.6.1 (Rambaut et al., 2014). The time-calibrated phylogeny is shown in Figure 2. 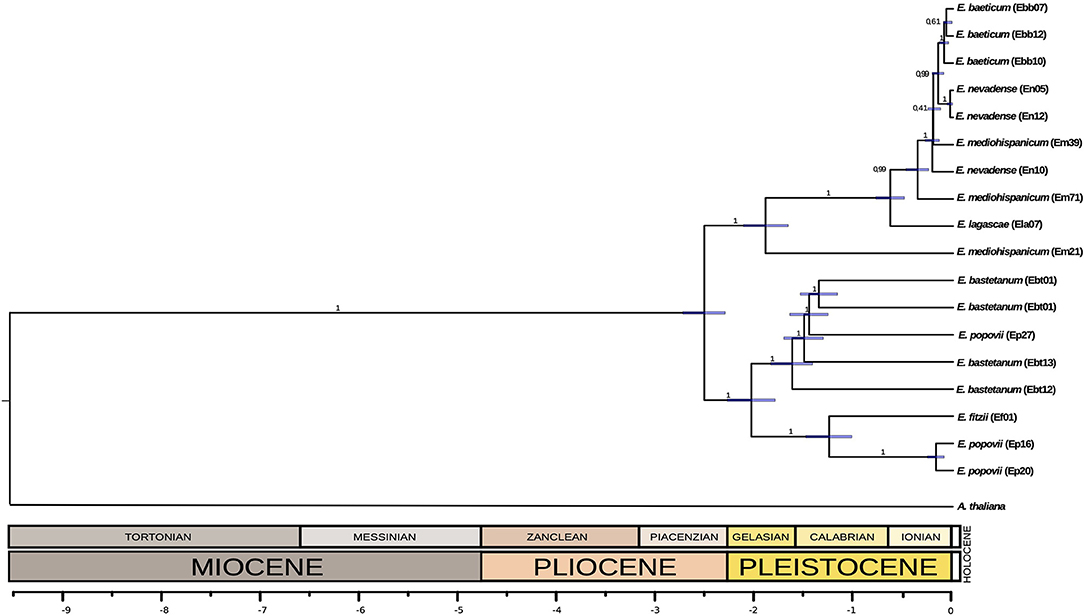 Figure 2. A time-calibrated phylogeny for the chloroplast DNA of the different populations of the Erysimum species analyzed here. Note the reticulated position of some populations, probably due to hybridization events.

The raw sequence read data for all the transcriptomes were deposited in the NCBI Sequence Read Archive (Data citation 1).

Erysimum is a genus for which phylogenetic relationships have not yet been fully established. Therefore, the primary use of this dataset will likely lie in molecular evolution analyses aimed at disentangling the taxonomy and biogeography of these and related species. Moreover, since the primary data are transcriptomes, they could be useful in plant evo-devo and physiological studies. They can also be incorporated into comparative studies aimed at identifying the differential expression of the genes expressed in the tissues sequenced in this work (i.e., flower buds). Although we expect our dataset to be essentially free of contamination, caution is advised when using this Data Report as we did not filter the reads for the presence of alien (i.e., bacterial or fungi) sequences.

COM, RR, and FP conceived and designed the study. COM analyzed the data, with the help of FP and JL and wrote the first draft. The final version of the M.S. was redacted with the contribution of all the authors.

Funding was provided by the Spanish Ministry of Science and Competitiveness (CGL2016- 79950-R; CGL2017-86626-C2-2-P), including FEDER funds. This research was also funded by the Consejería de Economía, Conocimiento, Empresas y Universidad, and European Regional Development Fund (ERDF), ref. SOMM17/ 6109/UGR and A-RNM-505-UGR18. COM was supported by the Ministry of Economy and Competitiveness (BES-2014-069022).

We are grateful to Modesto Berbel Cascales and José M. Gómez for their help in sampling and DNA/RNA extractions.

The Supplementary Material for this article can be found online at: https://www.frontiersin.org/articles/10.3389/fevo.2021.620601/full#supplementary-material

Copyright © 2021 Osuna-Mascaró, Rubio de Casas, Landis and Perfectti. This is an open-access article distributed under the terms of the Creative Commons Attribution License (CC BY). The use, distribution or reproduction in other forums is permitted, provided the original author(s) and the copyright owner(s) are credited and that the original publication in this journal is cited, in accordance with accepted academic practice. No use, distribution or reproduction is permitted which does not comply with these terms.