Corrigendum: The Legacy of Pre–Columbian Fire on the Pine–Oak Forests of Upland Guatemala

A correction has therefore been made to the Results, subsection Palaeoecological Trends, paragraph two and three: 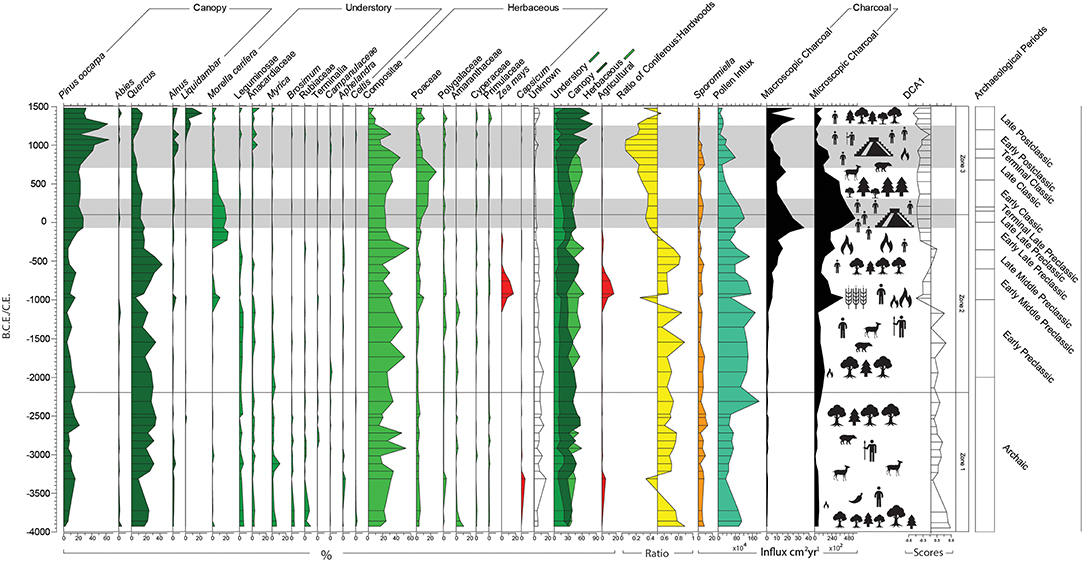 A correction has also been made to the Discussion, subsection Anthropogenic Impacts and Agrarian Practices, paragraph two:

Archaic populations from the Maya Area combined agriculture (e.g., pepper, beans, maize, squash, and chili) with hunting and gathering from as early as 5200B.C.E. (Pope et al., 2001). Evidence for agriculture from Centote Kail is first indicated by vegetation changes from 4000B.C.E. The observed changes include (i) a decline in canopy and understory taxa; (ii) increases in weedy disturbance taxa; (iii) a very small increase in local and regional burning; (iv) and the presence of cultivated taxa such as Capsicum (White, 1999), between c.3850 and 3300B.C.E. or Zea maysbetween c.970 and 550B.C.E. (Figure 5). A mixture of traditional hunter–gather practices combined with limited agriculture is exemplified by the abundance and variety of edible fruits and nuts (e.g., Brosimum, Myrica, and Anacardiaceae) and high abundance of fauna as indicated by the influx of Sporormiella.

Additionally, a correction has been made to Discussion, subsection Forest Structure, Composition and Successional Regeneration, paragraph one:

“Relatively equal abundances of canopy, understory, and herbaceous taxa from 4000 to 3700B.C.E. indicate a diverse and stratified forest structure comprising at least three vegetative levels. The high diversity of taxa, particularly in the understory (e.g., Leguminosae, Anacardiaceae, Myrica, and Rubiaceae), suggests a relatively low and open canopy allowing light to penetrate to the forest floor (Bush, 2000). This structure is typical of middle succession in mixed POF after a large clearance event (Peterson and Reich, 2001).”

Corrections have also been made in Figure 4 and Figure 5. The correct figures appear above.

Lastly, the Supplementary Material (including Supplementary Tables 1 and 2 and the raw data) has also been updated to reflect the correct taxa.

Copyright © 2019 Harvey, Nogué, Stansell, Petrokofsky, Steinman and Willis. This is an open-access article distributed under the terms of the Creative Commons Attribution License (CC BY). The use, distribution or reproduction in other forums is permitted, provided the original author(s) and the copyright owner(s) are credited and that the original publication in this journal is cited, in accordance with accepted academic practice. No use, distribution or reproduction is permitted which does not comply with these terms.