Methods: We searched the PubMed, EMBASE, and Cochrane databases for randomized controlled trials (RCTs), which assessed the efficacy of PARPi as a maintenance therapy for newly diagnosed advanced ovarian cancer. Progression-free survival (PFS) was the primary endpoint, which was assessed using hazard ratios (HRs) with 95% confidence intervals (95% CI). Progression-free survival was extracted independently, and the pooled results were used to compare the prognoses of patients who received PARPi maintenance therapy and those who received a placebo.

Conclusions: Patients with newly diagnosed advanced ovarian cancer who received PARPi maintenance therapy had a better prognosis than did those who received a placebo. Moreover, no significant changes in health-related quality of life were seen in PARPi-treated individuals.

Targeted therapies are a new treatment option for patients with ovarian cancer (7). Poly(adenosine diphosphate–ribose) polymerase (PARP) can prevent DNA repair in tumors with homologous recombination deficiency (HRD), including those with BRCA1 or BRCA2 mutations (8). Approximately 13% of ovarian cancers are caused by a mutation in BRCA1 or BRCA2 (9). Poly(adenosine diphosphate–ribose) polymerase inhibitors (PARPi) including niraparib, rucaparib, and olaparib have been approved as maintenance therapies for relapsed platinum-sensitive ovarian cancer patients regardless of BRCA status (10). However, it is unclear if PARPi can improve the prognosis of patients with newly diagnosed advanced ovarian cancer.

A comprehensive search of clinical trials published before December 1, 2019, in the PubMed, EMBASE, and Cochrane databases was performed in accordance with PRISMA (Preferred Reporting Items for Systematic Reviews and Meta-Analyses) guidelines (Supplementary Table 1). The following search terms were used: “poly(ADP-ribose) polymerase inhibitors,” “inhibitors of poly(ADP-ribose) polymerases,” “poly(ADP-ribosylation) inhibitors,” “PARP inhibitors,” “inhibitors, PARP,” “olaparib,” “niraparib,” “veliparib,” “rucaparib,” and “ovarian neoplasm,” “ovarian cancer,” “cancer of ovary.” There were no restrictions with regard to language. The references in the selected studies were also scrutinized to further identify relevant studies.

The exclusion criteria were as follows: (1) Population: patients with relapsed ovarian cancer and patients with bevacizumab as maintenance treatment in first line; (2) Intervention: patients did not receive oral PARPi as maintenance treatment; (3) Comparison: there were no control or placebo groups; (4) Outcomes: studies without PFS measurements; (5) Study design: studies that were not RCTs.

Two reviewers independently reviewed the included studies and extracted the following data: first author, year of publication, trial acronym, study period, follow-up time, number of total patients enrolled, FIGO stage, and PFS. The risk of bias approach proposed by the Cochrane Collaboration (13) was used to assess the quality of the included RCTs. Any discrepancies were discussed among all authors and identified by consensus.

The primary endpoint of this meta-analysis was PFS, which was assessed using hazard ratios (HRs). Stata software, version 12.0 (2011; Stata Corp., College Station, TX, USA), was used to perform the meta-analysis. Hazard ratios are presented with 95% confidence intervals (CIs). A random-effects model was used in all analyses. Significant two-tailed P < 0.05 was considered significant. We used Cochran's Q test and the I2 statistic to evaluate the heterogeneity among the studies (14, 15). The robustness of the results was assessed using sensitivity analyses (16). Subgroup analyses were conducted based on age, FIGO stage, the timing of chemotherapy in relation to surgery, BRCA mutation status, and homologous recombination status. Funnel plots that are used to assess publication bias were not performed for the limited number of included studies. 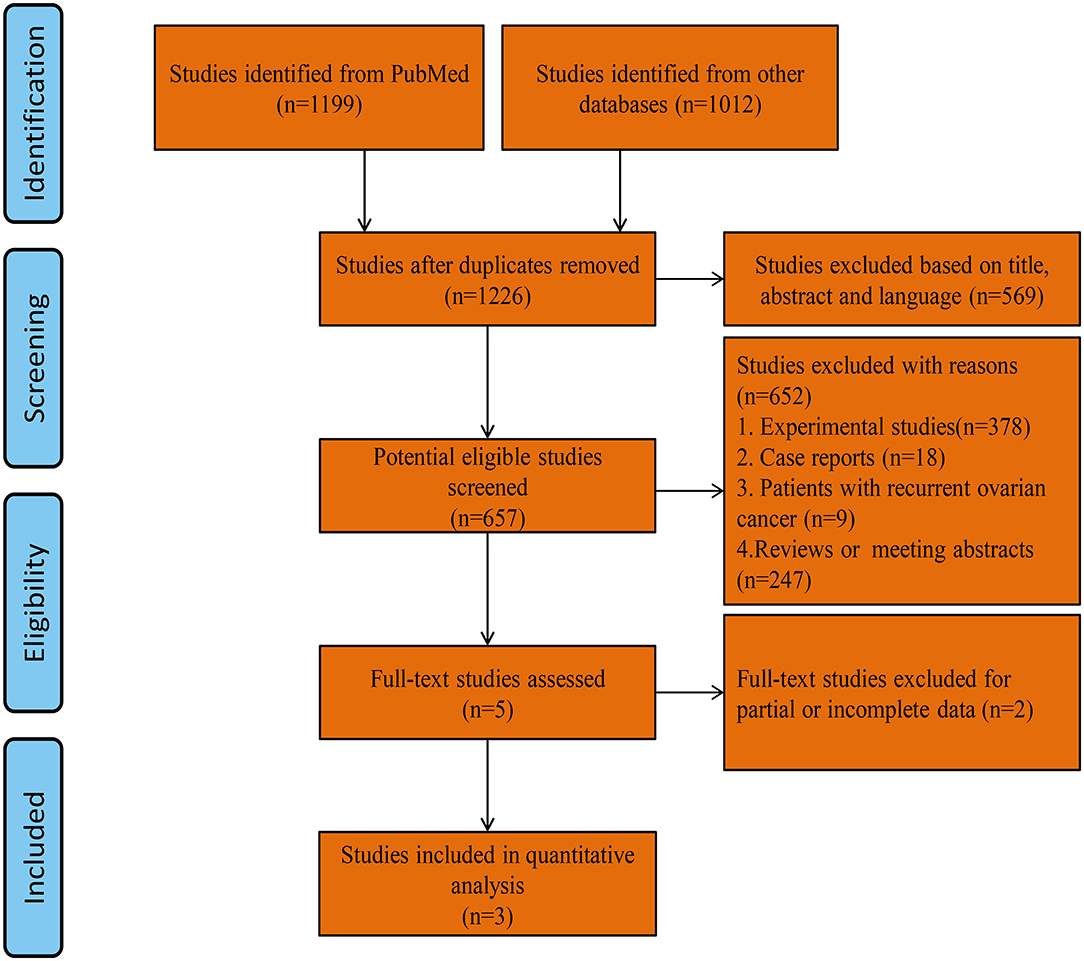 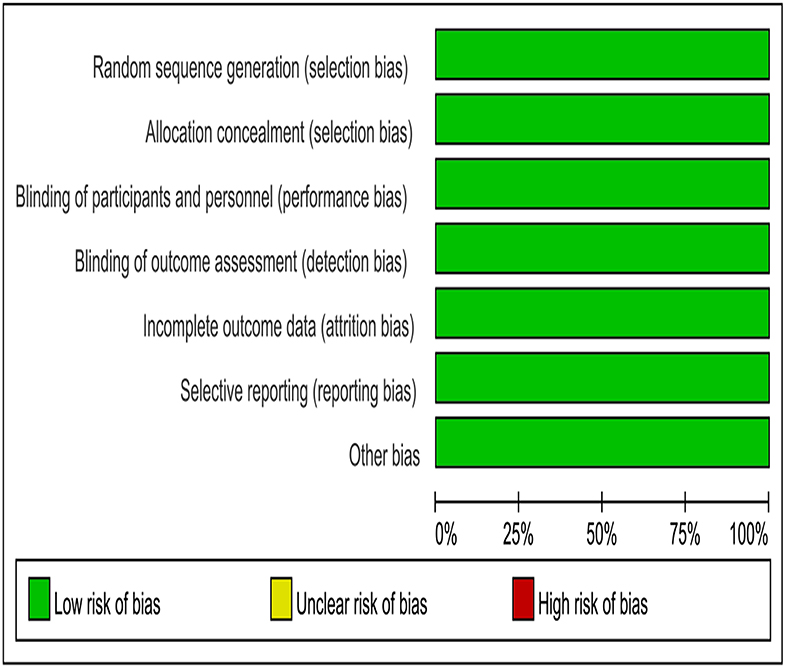 Table 1. Main characteristics of the study populations in the included studies. 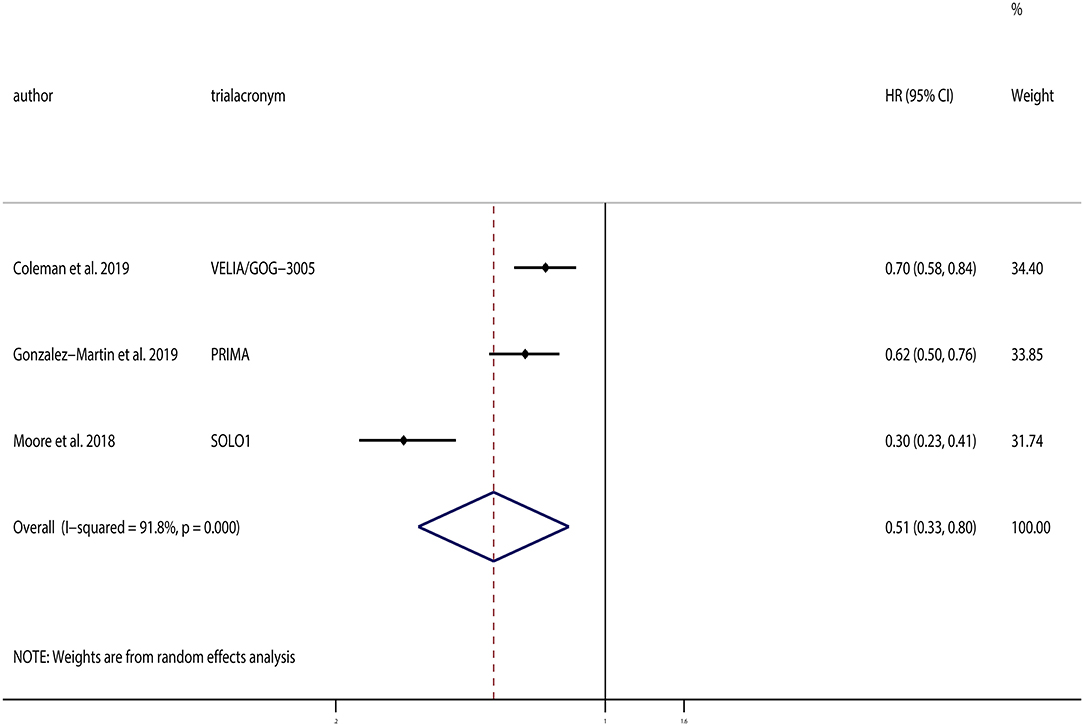 Which Ovarian Cancer Patients Could Benefit From PARPi?

Patients in all three trials received PARPi as a maintenance therapy, whereas VELIA/GOG-3005 added PARPi to first-line chemotherapy. Subgroup analysis of the other two studies that did not combine PARPi with chemotherapy demonstrated a significant improvement in PFS in PARPi group compared to the control group (HR, 0.43; 95% CI, 0.21–0.88; P = 0.022). 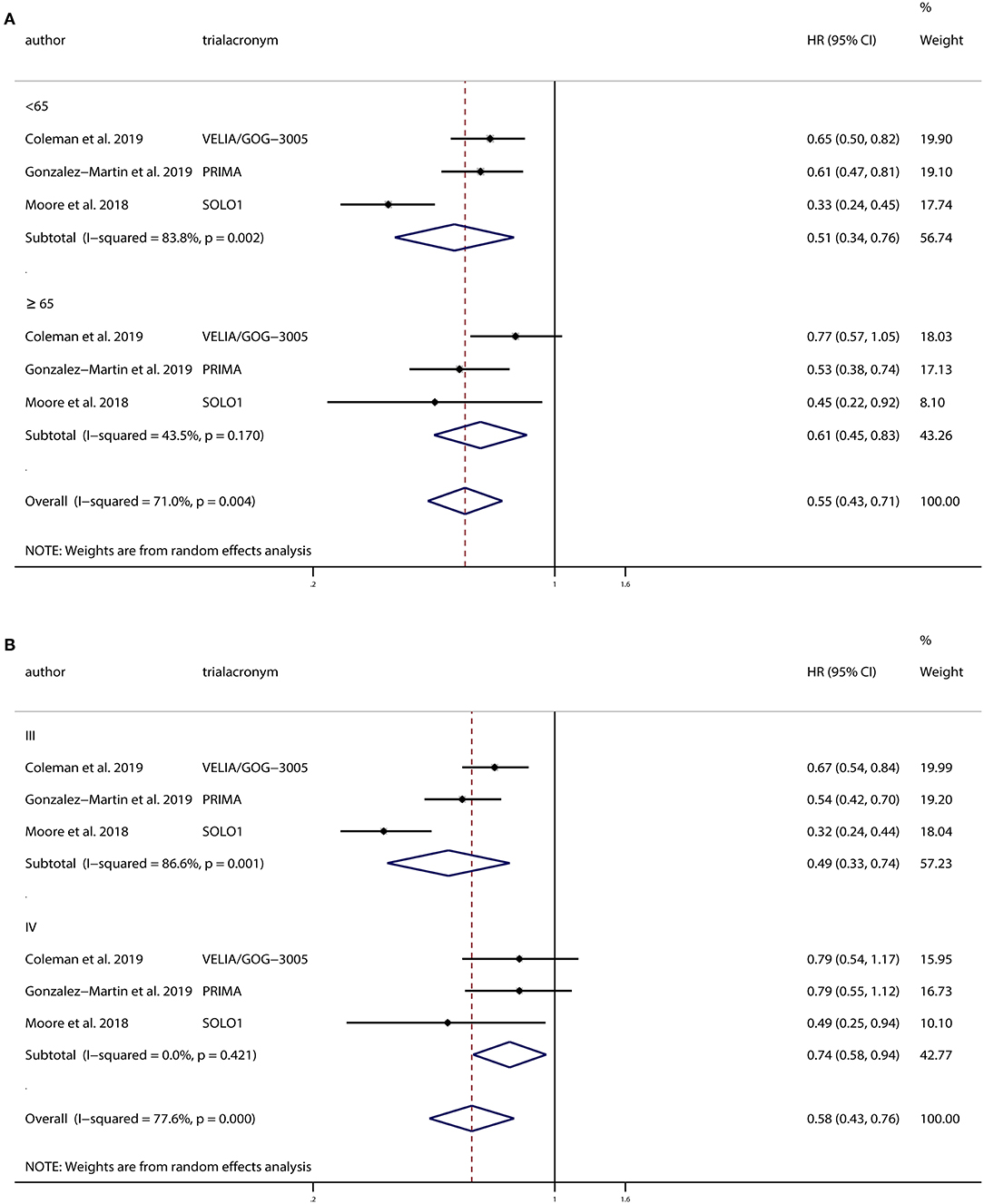 Systematic Review of Safety and Health-Related Quality of Life

All the three RCTs investigated adverse events during the trials. In VELIA/GOG-3005 and SOLO1, most adverse events were grade 1 or 2, and the percentages of patients experiencing adverse events were similar in the PARPi group and the control group. Anemia was the most common serious adverse event in the SOLO1 trial, with 22% of patients presenting anemia grade 3 or more in the olaparib arm as compared to 2% in the placebo arm. And the main reasons for discontinuation of olaparib therapy were anemia (2.3%) or nausea (2.3%). In the VELIA/GOG-3005 trial, 28% of patients in the niraparib arm presented thrombocytopenia grade 3 or grade 4 compared to 8% in the control arm, and the main reason for discontinuation of veliparib therapy was nausea (8%). PRIMA reported that 70% of patients in the niraparib group had grade 3 or higher adverse events compared to 18.9% in the placebo group. The most common severe adverse event was hematological toxicity, which was also the most common reason for discontinuation. The proportion of discontinuation was 12.0% in the niraparib arm and 2.5% in the placebo arm. All three trials also assessed health-related quality of life, and they all found that there were no clinically significant differences between the PARPi and the control groups (Figures 5, 6). 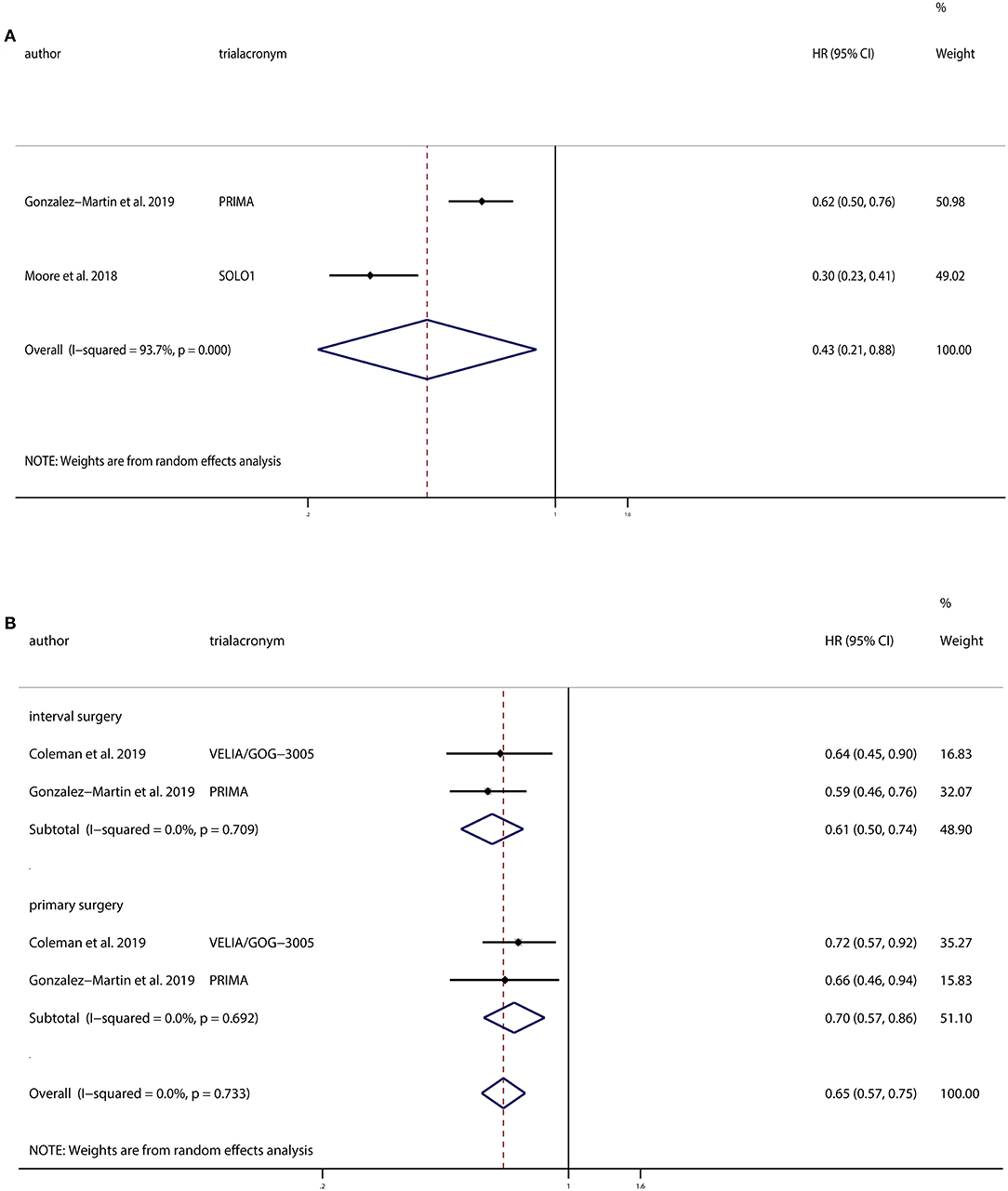 Figure 5. Progression-free survival (PFS) of (A) subgroup of patients without PARPi in combination with chemotherapy and (B) subgroups based on the timing of chemotherapy in relation to surgery. 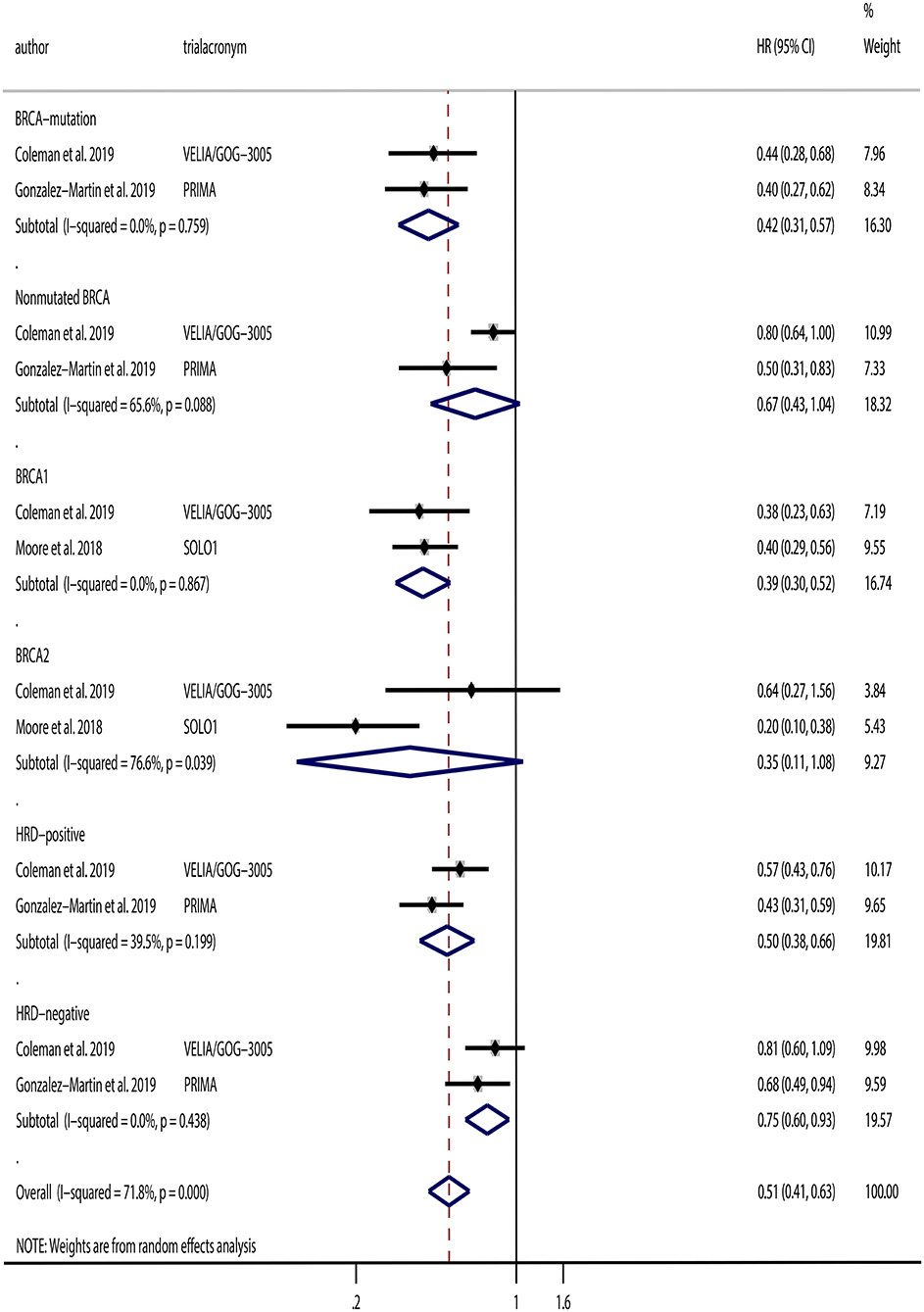 Over the past decade, many trials of targeted agents have been conducted in order to improve prognosis of ovarian cancer (18), including vascular endothelial growth factor inhibitors (19) and bevacizumab maintenance therapy after first-line chemotherapy for advanced disease (2). Poly(adenosine diphosphate–ribose) polymerase inhibitors have been proven to be effective in patients with platinum-sensitive recurrent ovarian cancer regardless of BRCA and HRD status (10). However, studies examining PARPi maintenance treatment in patients with newly diagnosed ovarian cancer are limited.

Three studies (SOLO1, VELIA/GOG-3005, and PRIMA) with a combined total of 1,881 advanced ovarian cancer patients were included in this meta-analysis. Our pooled results showed that PARPi maintenance therapy could improve PFS of patients with newly diagnosed advanced ovarian cancer. Subgroup analyses based on age also demonstrated an improvement in PFS in patients both <65 and >65 years of age. We next performed subgroup analyses based on FIGO stage, and all the three trials indicated that patients with stage III ovarian cancer who received PARPi had an improved PFS compared to patients who received placebos. For stage IV patients, SOLO1 (17) found a significant improvement in PFS in the PARPi group, but VELIA/GOG-3005 (12) and PRIMA (11) did not find any differences between the PARPi and placebo groups. When we conducted the subgroup analyses based on FIGO stage, we found that PARPi maintenance therapy was associated with an improvement in PFS in stage III regardless BRCA mutation and stage IV in BRCA mutation alteration.

To the best of our knowledge, this was the first meta-analysis to explore PARPi maintenance therapy in newly diagnosed advanced ovarian cancer. This meta-analysis was conducted according to PRISMA, and we used PICOS to determine the inclusion criteria. The studies we included were all well-designed, high-quality RCTs.

However, some limitations in our meta-analysis should be stated. First, the heterogeneity of population among the included trials was significant. The tumor characteristics of patients enrolled in the three trials were not consistent. For example, SOLO1 observed the PFS of presence or not of residual tumor after debulking surgery, whereas VELIA/GOG-3005 observed them in primary surgery group and interval surgery group, respectively, and PRIMA did not specify presence or absence of residual tumor after surgery. Thus, we could not combine the results according to the presence or absence of residual tumor after surgery. Second, the heterogeneity of inclusion criteria and exclusion criteria was not consistent in different studies. Although PRIMA and VELIA/GOG-3005 tested the homologous recombination status, they used a different criterion to define HRD. These issues contribute to the heterogeneity of the meta-analysis. Third, the trials researched on the maintenance therapy with different drug (olaparib, niraparib, and veliparib). Fourth, we could not determine OS because of the lack of OS data in the RCTs, which may have provided a more convincing result. Fifth, the number of the studies included was limited, and more, larger and high-quality RCTs are needed to confirm our conclusion.

Poly(adenosine diphosphate–ribose) polymerase inhibitor maintenance therapy may improve PFS in patients with newly diagnosed advanced ovarian cancer, especially patients with BRCA mutations or HRD regardless age, stage at diagnosis, and time to surgery performed. There were no clinically significant differences in health-related quality of life between the PARPi and placebo groups.

This work was funded by National Natural Science Foundation of China (Grant No. 81501235) and Science and Technology Planned Project of Shenyang (Grant No. 19-112-4-020).

The Supplementary Material for this article can be found online at: https://www.frontiersin.org/articles/10.3389/fonc.2020.01204/full#supplementary-material

Copyright © 2020 Wang, Ren, Song, Wang, Zhang and Ouyang. This is an open-access article distributed under the terms of the Creative Commons Attribution License (CC BY). The use, distribution or reproduction in other forums is permitted, provided the original author(s) and the copyright owner(s) are credited and that the original publication in this journal is cited, in accordance with accepted academic practice. No use, distribution or reproduction is permitted which does not comply with these terms.