The Application of and Factors Influencing, the NB5 Assay in Neuroblastomas

Purpose: The NB5 assay was performed in bone marrow (BM) and peripheral blood (PB) to detect neuroblastomas (NBs) with micrometastases. The sensitivity and factors influencing the NB5 assay were preliminarily evaluated.

Methods: The NB5 assay uses RT-PCR to detect the co-expression of five mRNAs from the neuroblastoma-associated genes, CHGA, DCX, DDC, PHOX2B, and TH. We enrolled 180 cases of neuroblastoma and 65 cases of non-neuroblastoma. Bone marrow and peripheral blood were collected from every patient. The gold standard for the diagnosis of NB was pathological evaluation of solid tumor specimens or bone marrow biopsies (BMBs) from hematological tumors. STATA version 15 and SPSS version 17 software were used for analysis.

Neuroblastoma (NB) is the most common extracranial solid tumor in children and accounts for 15% of all pediatric malignancy deaths (1). Although NB has a heterogeneous clinical course and may regress spontaneously, most patients with NB experience early onset and progress rapidly. Approximately 45% of patients have distant metastatic lesions when diagnosed during infancy (2). NB with micrometastases are known as the minimal residual disease (MRD) and contribute to relapse, but are difficult to detect (3). The persistence of MRD is also predictive of worse patient survival and poorer outcomes (4). Bone marrow biopsies (BMBs) are routinely used for the diagnosis of bone marrow (BM) metastasis by cytological and histological examinations, which exhibit an analytical sensitivity of less than 1 × 10−3. Thus, such sensitivities could severely underestimate the prevalence of bone marrow involvement (1, 2, 5, 6). Immunocytological investigations or flow cytometry had an analytical sensitivity of up to (1 × 10−4) − (1 × 10−5) for MRD in NB (5). With well-defined reverse transcriptase polymerase chain reaction (RT-PCR) markers that could provide a sensitivity of MRD of 1 × 10−6, one NB cell among 106 normal cells could be detected for the early diagnosis of NB.

Several MRD diagnostic methods based on the expression of multiple gene markers have been reported (7–11). As a novel diagnostic method for NB, the mRNAs of five neuroblastoma markers (NB5 assay), including chromogranin A (CHGA), doublecortin (DCX), dopadecarboxylase (DDC), paired-like homeobox 2b (PHOX2B), and tyrosine hydroxylase (TH) were detected in the BM and peripheral blood (PB) from patients using RT-PCR (8). The NB5 assay was developed at the Children’s Hospital of Los Angeles and is very sensitive in detecting MRD in BM and PB. Shanghai Bokang Biotechnology Co. LTD performed the detection services for MRD in NB using the NB5 assay.

The current consensus is that MRD remains in a dormant state, until “awakened” to progress towards overt metastases (12). MRD existing in the blood and bone marrow could contain tumor-initiating cells that generate tumors through abnormal proliferation and differentiation (13). A good MRD detection marker should be exclusively expressed in NB cells and not in non-NB cells; however, no clinical studies evaluated the sensitivity and effectiveness of these methods with NB markers. In this study, the NB5 assay was performed to assist in the clinical diagnosis of NB, and its sensitivity and specificity were preliminarily evaluated.

Patients were regarded as having micrometastases when the expression of three or more genes was detected. Between August 2015 and May 2019, we enrolled 180 NB cases and 65 non-NB cases from the Children’s Hospital of Fudan University. This study received approval from the local Research Ethics Committee of our hospital and was performed in accordance with the approved guidelines. Written informed consent was obtained from the guardians of each patient. The gold standard for the diagnosis of NB was based on pathological evaluations of solid tumor specimens or the BMBs of hematologic tumors.

BM (2 ml) and PB (2 ml) were collected from each patient with a solid tumor or hematologic tumor, respectively. Peripheral blood mononuclear cells (PBMCs) were isolated from heparinized blood and bone marrow by density separation with Ficoll–Hypaque (14). Total RNA was prepared using the TRIzol® reagent (Invitrogen) and processed with the RNeasy® Mini Kit (QIAGEN). The RNA Integrity Number (RIN) was obtained using the Agilent Bioanalyzer, and only specimens with RIN >5.5 were tested. Reverse transcription of 2,500 ng of total RNA in 20 μl was carried out with M-MLV Reverse Transcriptase (Life technologies). The NB5 assay quantified the expression of the neuroblastoma-associated genes, CHGA, DCX, DDC, PHOX2B, and TH, as well as the housekeeping gene, beta-2-microglobulin (B2M). Predesigned and preoptimized probes and primer sets (Supplementary Table S1) were included with 2,500 ng of cDNA and amplified using standard cycling conditions using the 7900HT Fast Real-Time PCR System (Applied Biosystems). The ΔCt was chosen instead of Ct alone as ΔCt accounts for the RNA quality of the samples obtained. Note that ΔCt values may be equivalent when one specimen has no detectable NB mRNA, and other specimen is mildly positive. The detection service of NB5 assay was supplied by Shanghai Bokang Biotechnology Co. LTD.

The sensitivity and specificity of the NB5 assay were determined using STATA version 15 software. The chi-square test and logistic regression analyses were carried out using SPSS version 17 software. P-values <0.05 were considered statistically significant. 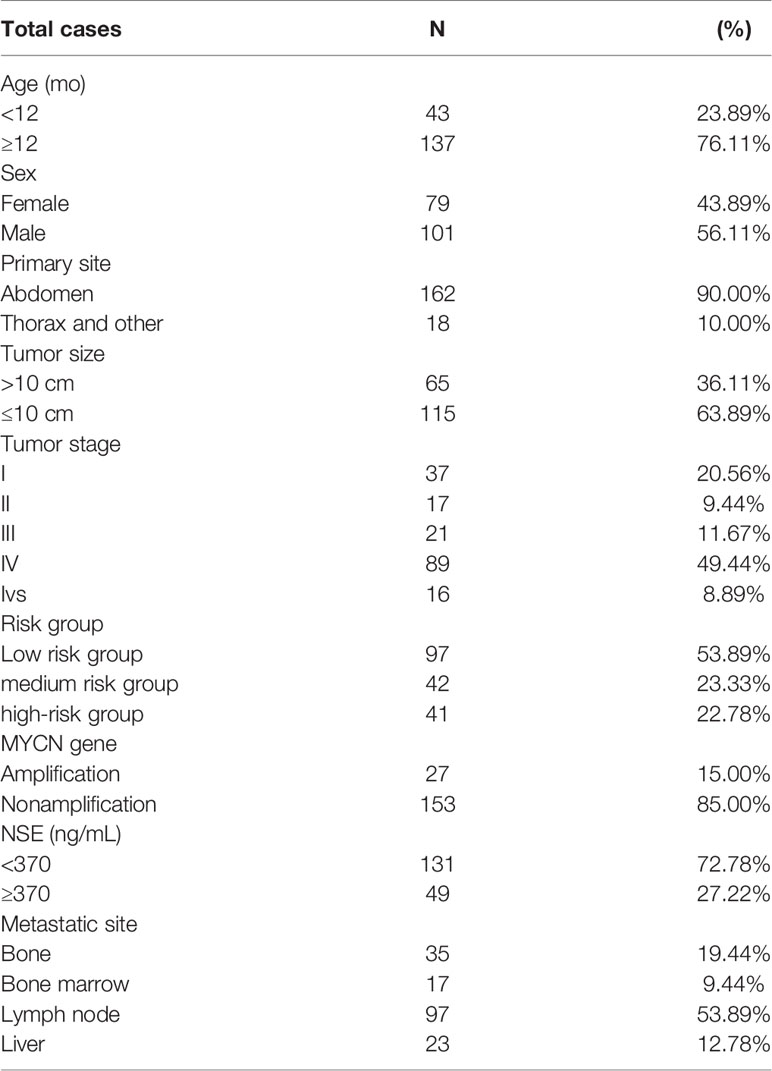 The Sensitivity and Specificity of the NB5 Assay

Table 2 Sensitivity and specificity of the NB5 assay in BM. 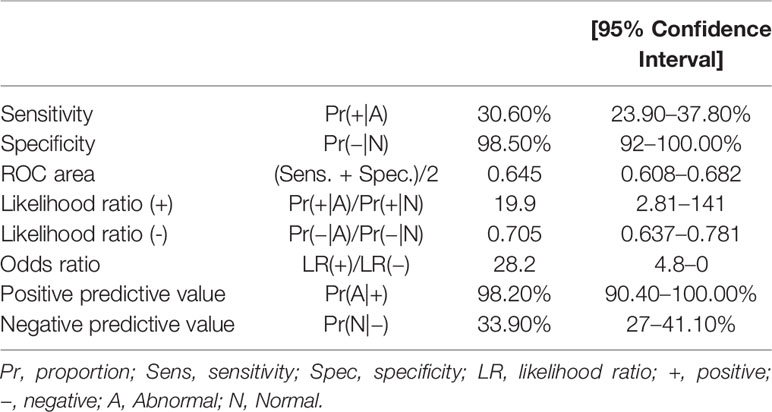 Table 3 Sensitivity and specificity of the NB5 assay in PB. 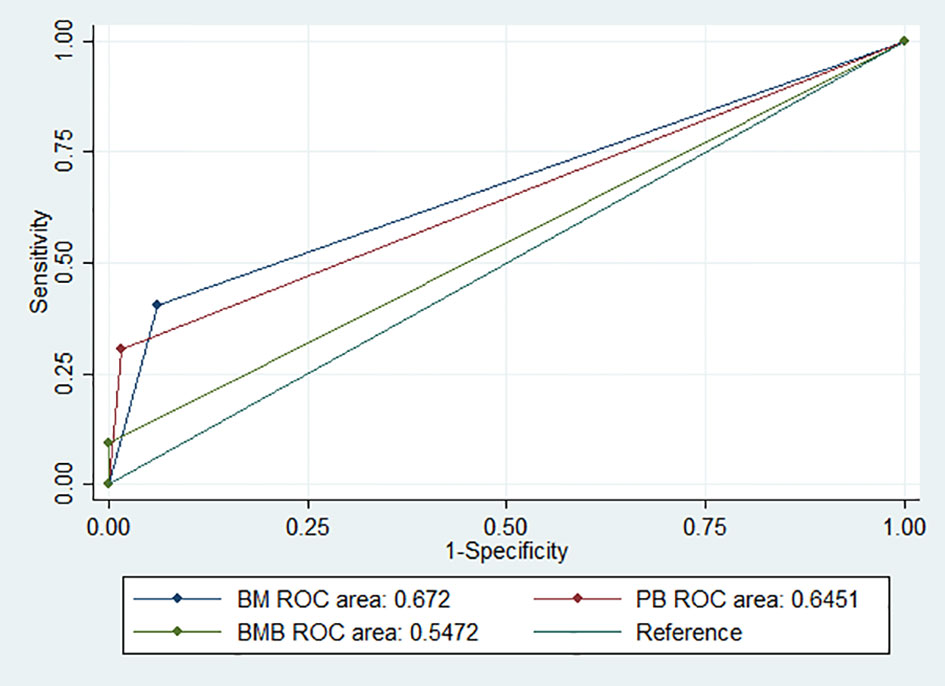 Analyses of the Sensitivity of the NB5 Assay

Table 4 Sensitivity of the NB5 Assay between BM, PB, and BMBs from different INSS stages.

Table 5 Sensitivity of the NB5 assay in BM and PB from different INSS stages.

The Factors Influencing the Analysis of the NB5 Assay

Table 6 Factors influencing the analysis of the BN5 assay in BM and PB.

Previously, CHGA, DCX, DDC, PHOX2B, and TH were suggested as indicators of micrometastases in NB by single mRNA or combinations (9, 11). Several studies suggested that the analysis of multiple genes was more informative than the analysis of a single gene in detecting NB cells (15–18). In fact, the combination of all five genes is more sensitive in detecting NB micrometastases (8).

PHOX2B encodes a homeodomain transcription factor involved in the differentiation and development of several major noradrenergic neural cells (19). PHOX2B is highly expressed in NB and has been reported as a specific marker for MRD in NB (17, 20). DCX is specifically expressed in migrating neurons of the central and peripheral nervous systems, and regulates the microtubule cytoskeleton by signaling pathway (21). CHGA is a neuroendocrine marker that participates in coding for neurosecretory granules that promote the differentiation of NB cells (22). TH encodes the first enzyme involved in the catecholamine synthesis pathway, which serves a functional role in the detection of NB with micrometastases, as catecholamines are mainly produced by NB cells (3). Similar to TH, DDC is a key enzyme involved in catecholamine synthesis and has been claimed to be a sensitive marker for NB (23).

Except as diagnostic methods, Virginie et al. suggested that the mRNA levels of PHOX2B, TH, and DCX in BM could be used as predictors of event-free survival (EFS) and overall survival (OS) and also to monitor the statuses of patients throughout their course of treatment for NB (16). Janine et al. found that the expression of these mRNAs varied greatly during the treatment of NB or during relapse, which rendered them excellent markers (24). However, Alexander et al. found that flow cytometric analysis for NB cells in BM was much stronger than mRNA detection in prognostic impact (25). Thus, based on this study, the prediction of the NB5 assay in the relapse and prognosis of NB warranted further evaluation, especially compared with flow cytometric analyses.

Illegitimate expressions were investigated in the non-NB group, including in retinoblastoma (n = 2), nephroblastoma (n = 1), and teratoma samples (n = 1) in BM (+) cases, and in an endodermal sinus tumor sample (n = 1) in a PB (+) case. However, most of such samples were weakly positive in the NB5 assay. Among the five genes evaluated for mRNA expression, PHOX2B was a more specific biomarker for NB than TH, DDC, CHGA, or DCX. The mRNA expression of TH, DDC and DCX was observed in hematopoietic cells and PB from healthy donors, while PHOX2B expression was limited to only NB samples (7, 9, 26). Despite the small number of false positives and false negatives in the NB5 assay, we will now conduct a larger multicenter study, combined with clinical characteristics and multiple other tests for further verification of NB. To maximize the sensitivity and specificity of the NB5 assay, we will optimize the assay to improve its accuracy of diagnosis.

The studies involving human participants were reviewed and approved by the local Research Ethics Committee of Children’s Hospital of Fudan University. Written informed consent to participate in this study was provided by the participants’ legal guardian/next of kin.

KL, HW and ZW conceived and designed the study. CW, ZW, JL and YX collected the clinical data, performed data analysis, and wrote the paper. YJ and WY offered the assist in data collection. KL, ZW, HW and YX reviewed and edited the manuscript. All authors contributed to the article and approved the submitted version.

This study was sponsored by the Personnel Training Program for Distinguished Medical Young Scholar (2017, to KL), the New Hundred People Plan of Shanghai Health and Family Planning Commission (2017 BR052, to KL), the Shanghai Sailing Program (17YF1401400, to ZW), the Youth Fund of Shanghai Health and Family Planning Commission Clinical Research Special Plan (20184Y0212, to ZW), the Clinical Research Plan of SHDC (no. SHDC2020CR2009A) and the Shanghai Municipal Key Clinical Specialty (no. shslczdzk05703).

The Supplementary Material for this article can be found online at: https://www.frontiersin.org/articles/10.3389/fonc.2021.633106/full#supplementary-material

15. Träger C, Vernby Å, Kullman A, Øra I, Kogner P, Kågedal B. mRNAs of tyrosine hydroxylase and dopa decarboxylase but not of GD2 synthase are specific for neuroblastoma minimal disease and predicts outcome for children with high-risk disease when measured at diagnosis. Int J Cancer (2008) 123:2849–55. doi: 10.1002/ijc.23846

Copyright © 2021 Wang, Wang, Xu, Le, Jiang, Yao, Wang and Li. This is an open-access article distributed under the terms of the Creative Commons Attribution License (CC BY). The use, distribution or reproduction in other forums is permitted, provided the original author(s) and the copyright owner(s) are credited and that the original publication in this journal is cited, in accordance with accepted academic practice. No use, distribution or reproduction is permitted which does not comply with these terms.