Epstein-Barr virus (EBV)-positive T/natural killer (NK)-cell lymphoproliferative disorder (EBV+ T/NK LPD) encompasses a heterogeneous group of disorders, including chronic active Epstein–Barr virus infection (CAEBV), Epstein-Barr virus-associated hemophagocytic lymphohistiocytosis (EBV-HLH), systemic EBV+ T-cell lymphoma of childhood and hydroa vacciniforme-like lymphoproliferative disorder (HVLPD) and so on. EBV+ T/NK LPD are rare, predominantly affect children and young adults, and associated with high mortality. To date, only hematopoietic stem cell transplantation (HSCT) has been shown to be promising for EBV+ T/NK LPD patients, including those not yet having progressed to lymphoma (1). In this review, we summarized the clinical features of EBV+ T/NK LPD in Chinese patients including CAEBV, EBV-HLH, systemic EBV+ T-cell lymphoma of childhood and HVLPD.

CAEBV has been defined as a systemic EBV-positive lymphoproliferative disease (EBV+ LPD) characterized by fever, lymphadenopathy, and splenomegaly developing after EBV infection in patients without known immunodeficiency. CAEBV is more common in children than in adults.

In China, there were only two retrospective studies on the clinical features of CAEBV systematically, one is about pediatric patients and the other is about adult cases (2, 3). In total, eighty one CAEBV patients were reported, including 53 children with a mean age of 6.3 years (ranging from 6 months to 15 years) and 28 adults with a median age of 45 years (ranging from 20 to 81 years). The male to female ratios were 2.12 and 0.75 in children and adults, respectively.

The clinical features and complications of CAEBV in Chinese patients are summarized in Table S1. The most frequent signs and symptoms of CAEBV were fever, splenomegaly, hepatomegaly and lymphadenopathy. Life-threatening complications mainly included hemophagocytic syndrome, hepatic failure, and interstitial pneumonia. The peripheral blood count depletions are common in CAEBV patients. In China, one study about pediatric CAEBV patients showed that there was an imbalance in lymphocyte subsets and disturbance in cellular immunity. The number of lymphocytes, NK cell, B cell, total T cell, CD4+ T cell, and CD8+ T cell in CAEBV were lower than that in acute EBV infection (4). In adult onset CAEBV patients, the B cell, NK cell, CD4+ T cell and CD8+ T cell counts were also decreased (3).

The clinical characteristics of pediatric CAEBV cases were different from that of adult patients in China. The prevalence of hemophagocytic syndrome was lower in pediatric patients than in adult patients. Unlike pediatric cases reported, the manifestations of cardiovascular diseases in adult patients included pulmonary arterial hypertension, decreased cardiac function and aorta vasculitis. A comparison with Japanese CAEBV (5) was also made in Table S1. The incidences of lymphadenopathy and interstitial pneumonitis were comparatively higher and the prevalence of hypersensitivity to mosquito bites was comparatively lower in Chinese patients than in Japanese patients.

CAEBV can be classified into the T-cell, NK-cell and B-cell types, depending on which lymphocyte subset is mainly infected with EBV. However, in Chinese CAEBV patients, EBV infected cell types were analyzed in only small fraction of patients. In a study, in seven out of 10 CAEBV patients the virus infected cell type was detected, with six cases in T cells, and one in NK cells (6).

Although CAEBV occurred in individuals without apparent immunodeficiency, primary HLH associated immune gene mutations were detected in some CAEBV patients in China, such as heterozygous mutations in PRF1, UNC13D, and STXBP2 (7). Furthermore, a pediatric patient with atypical primary immunodeficiency (PID) was reported with CAEBV as the initial symptom (8). Thus, genetic background may play a role in this disease.

There were few studies on the treatment of CAEBV in China. Retrospective studies showed that the prognosis of CAEBV is poor. Without HSCT, only 12.0% patients (5/42) experienced remission for 1 to 3 years after the onset of the disease and 26.2% (11/42) patients died 7 months to 3 years after onset because of the life-threatening complications, such as hemophagocytic syndrome, malignant lymphoma and hepatic failure and so on (2).

HLH is an immune disorder characterized by uncontrolled T lymphocyte and macrophage activation and an excessive production of inflammatory cytokines. EBV-HLH is the most frequent subtype of secondary HLH triggered by infections. Eligibility criteria for EBV-HLH were as follows: (1) meeting HLH-2004 diagnostic criteria (9), (2) high level of EBV viral load in the peripheral blood or tissues or number of cells containing EBV-encoded small RNA (EBER) in the peripheral blood or tissues.

In China, most of the studies on EBV-HLH were retrospective (10–12). There was no exact number of EBV-HLH cases in China because the overlap among different studies conducted in the same hospital. EBV-HLH was more common in pediatric patients than in adults, with the age of onset from 2 months to 78 years (12, 13). Over all, male was more likely to develop EBV-HLH than female.

Active EBV-HLH develops rapidly with a high mortality rate if reasonable and effective interventions are not undertaken. The initial therapies of EBV-HLH used in China included antiviral therapy, glucocorticosteroid, symptomatic therapy, HLH-94, and HLH-04 regimen. Antiviral therapy was also used in some EBV-HLH patients in China (10, 12, 13), but the exact benefit of antiviral therapy was not shown in these studies. The treatments of EBV-HLH in China are shown in Table 1. The response rate showed that HLH-94 and HLH-04 regimens were more effective. Without chemotherapy, the prognosis of EBV-HLH was very poor. 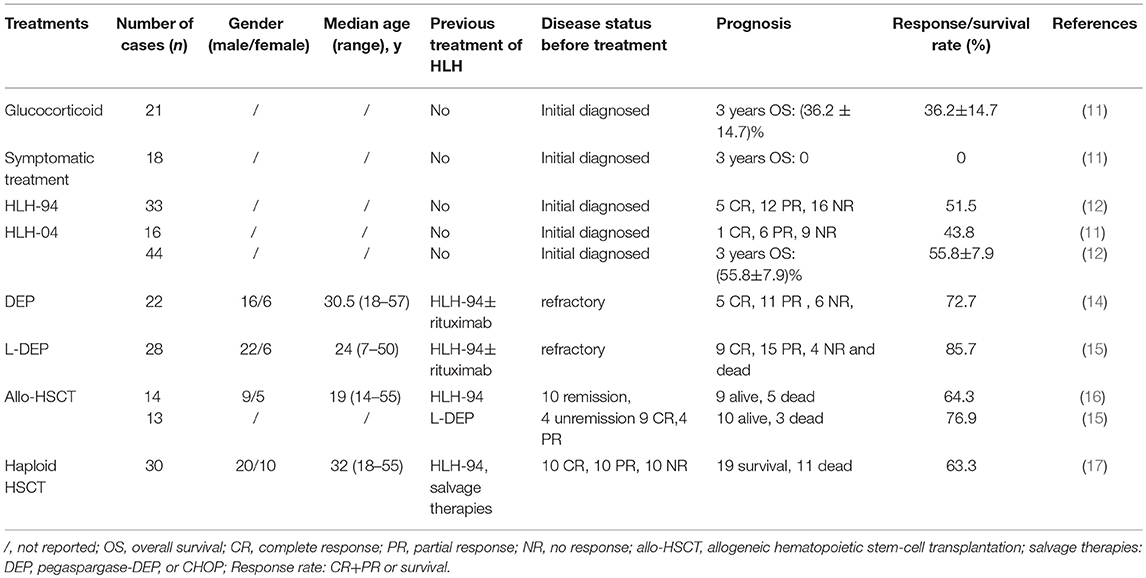 Table 1. Treatment of EBV-HLH in China.

In China, 3 pediatric cases with systemic EBV+ T-cell lymphoma were reported (20, 21) (Table S2). The common clinical features of this disease were fever and hepatosplenomegaly. A special patient manifested as gastrointestinal disorders and skin lesion progressed from CAEBV (T-cell type) to systemic EBV+ T-cell lymphoma of childhood was reported (21).

The prognosis of systemic EBV+ T-cell lymphoma is poor. Among the 3 cases reported in China, 2 of them died. One patient experienced rapid progression and died within 5 months of onset (20). The other one died of intestinal hemorrhea (21).

HVLPD is a rare type of EBV+ lymphoproliferative disorder of cytotoxic T-cell or NK-cell origin that mainly affect children, characterized by a vesicopapular skin eruption that clinically resemble hydroa vacciniforme (HV). The disease is reported to more frequently affect Asians and Latin Americans. Its name used to be hydroa vacciniforme-like lymphoma in 2008 World Health Organization (WHO) classification of lymphomas (18) and changed to HVLPD in 2016 WHO classification of lymphoid neoplasms (19). 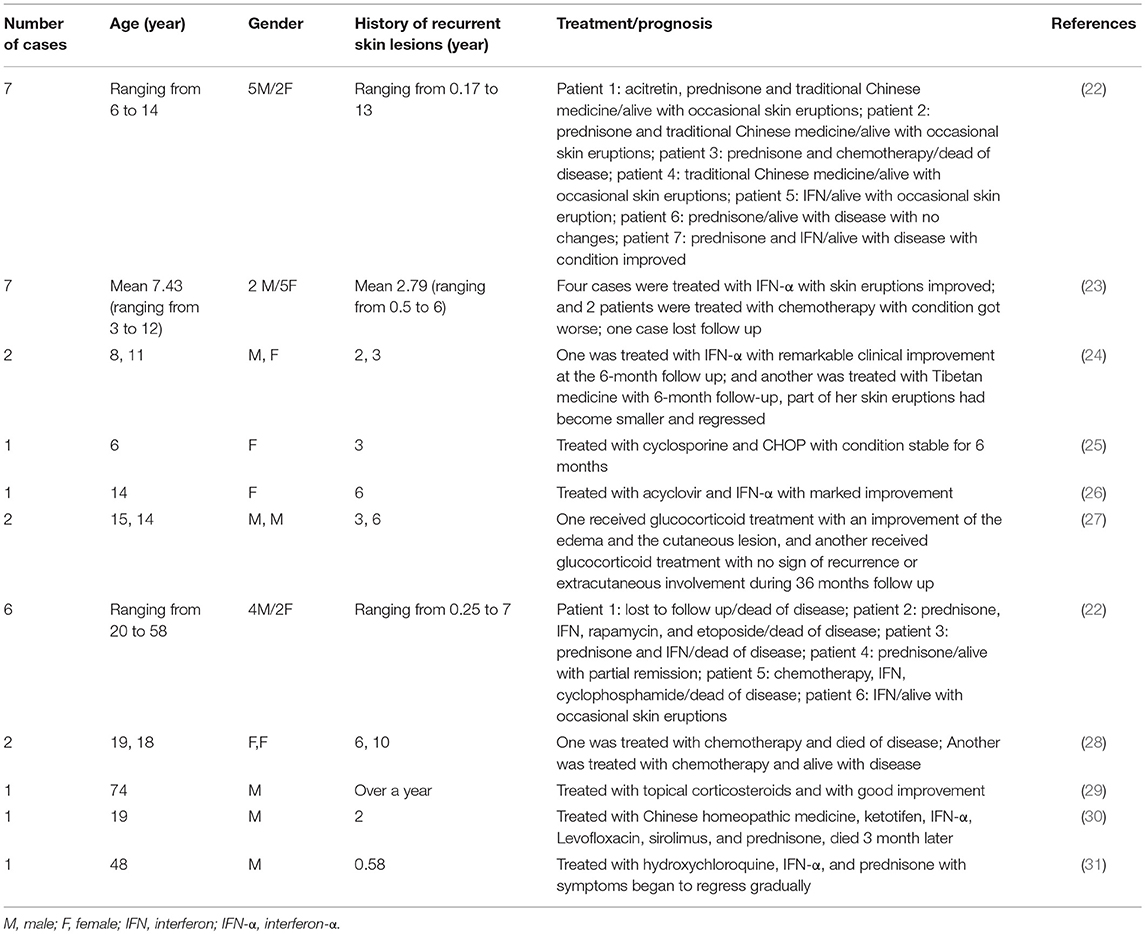 HVLPD patients often had a long history of recurrent skin lesions before systemic manifestations. In Chinese HVLPD patients, the history of recurrent skin lesions ranged from 2 months to 13 years (22). Many therapies have been applied for the treatment of HVLPD, including interferon (IFN), traditional Chinese medicine, acitretin, acyclovir, prednisone, prednisolone, and chemotherapy. IFN and glucocorticoid were used more commonly and always made an improvement of the disease (22–24, 26). Chemotherapy is uncommonly used because the temporary improvement of disease and the worsened condition of patients after the use of it (22, 23, 25). The prognosis of HVLPD was not well. In all patients reported in China, 20 cases (64.5%) had condition improved after therapy, 6 cases (19.4%) died, 3 cases (9.7%) got worse after therapy, 1 case (3.2%) had no change after therapy and 1 case (3.2%) lost follow up.

In conclusion, EBV-positive T/NK-cell lymphoproliferative disorders encompass a heterogeneous group of disorders which have a common feature with excessive lymphoid proliferation of mainly T cells and/or NK cells. They often have overlapping clinical symptoms as well as histologic and immunophenotypic features because both T and NK lymphoid cell types derive from a common precursor.

Limitation of the Mini Review

There were some limitations in this mini review. First, in China EBV infected lymphocyte lineages were only characterized in small part of CAEBV patients, not characterized in EBV-HLH and HVLPD patients. It has been shown that clinical feature of CAEBV are different between T-cell type and NK-cell type. So it is difficult to compare the clinical features of Chinese CAEBV with Japanese CAEBV without considering EBV infected cell types. Second, the treatment and outcome of some CAEBV cases were not fully described in references.

The Supplementary Material for this article can be found online at: https://www.frontiersin.org/articles/10.3389/fped.2018.00289/full#supplementary-material

Copyright © 2018 Ai and Xie. This is an open-access article distributed under the terms of the Creative Commons Attribution License (CC BY). The use, distribution or reproduction in other forums is permitted, provided the original author(s) and the copyright owner(s) are credited and that the original publication in this journal is cited, in accordance with accepted academic practice. No use, distribution or reproduction is permitted which does not comply with these terms.