Etiologies of Hospitalized Acute Bronchiolitis in Children 2 Years of Age and Younger: A 3 Years' Study During a Pertussis Epidemic

Methods: Children hospitalized with bronchiolitis were eligible for a prospective study for 36 months from January 1, 2017, to December 31, 2019. Besides B. pertussis, 10 common respiratory viruses and Mycoplasma pneumoniae (MP) were confirmed by laboratory tests. Medical records of patients were reviewed for demographic, clinical characteristics, and laboratory examination.

Pertussis, caused by the bacterium Bordetella pertussis, is a highly contagious respiratory disease and one of the leading causes of death from infectious diseases in children. B. pertussis, a Gram-negative bacterium that was first described by Bordet and Gengou in 1906 (1), has recently reemerged as a major public health threat. The World Health Organization reported 141,074 confirmed pertussis cases worldwide in 2018 (2). Approximately 160,700 deaths were reported worldwide in 2014 from pertussis in children <5 years of age (3).

Bronchiolitis is the most common acute respiratory disease in infants and young children, and one of the most common causes of hospital admission (4, 5). A total of 40–80% of infection is caused by respiratory syncytial virus (RSV), followed by human rhinovirus (HRV), adenovirus (ADV), parainfluenza virus, human bocavirus (hBoV), and human metapneumovirus (hMPV) (6, 7).

In recent years, several studies suggested that B. pertussis is a possible pathogen causing bronchiolitis in infants and young children hospitalized for lower respiratory tract infections (8–10). However, studies reporting the prevalence and clinical characteristics of B. pertussis bronchiolitis are rare. This study aimed to assess the epidemiological features and clinical characteristics of B. pertussis infection and evaluate its impact on infants and young children hospitalized with acute bronchiolitis.

This prospective descriptive study was conducted on children presenting with acute bronchiolitis who were admitted to the Department of Respiratory Medicine in the Children's Hospital of Soochow University between January 1, 2017, and December 31, 2019. Acute bronchiolitis was characterized by age ≤2, cough, tachypnea, retraction, and expiratory wheezes, often accompanied by rales (11). B. pertussis was confirmed by polymerase chain reaction (PCR) assays (12). Patients requiring oxygen supply were considered with severe conditions. The exclusion criteria were as follows: (1) patients with incomplete clinical data; (2) patients with bronchopulmonary dysplasia, heredity metabolic diseases, neurological disorders, congenital heart disease, and immunodeficiency; and (3) patients with evidence suggesting that wheezing was caused by tuberculosis and non-infectious factors such as bronchial foreign bodies.

The study was approved by the ethics committees of Children's Hospital Soochow University (Approval No. 2016026). Informed consent was obtained from the parents of all children enrolled in this study.

Vaccination history was obtained by querying the “Suzhou Children's Vaccination Inquiry and Evaluation Platform.” A diphtheria, tetanus, and acellular pertussis combination vaccine was administered as a primary series at 3, 4, and 5 months, followed by a booster dose at 24 months in China. The vaccination status was regarded as ever-vaccinated if one to three doses were received.

Data regarding demographic, clinical, and laboratory characteristics were documented. Demographic and clinical characteristics included age, gender, length of hospital stay, and requirement of supplemental oxygen. Laboratory specimens were obtained including blood and nasopharyngeal aspirates (NPAs). NPAs were obtained during the first 24 h of hospitalization, using a sterile plastic catheter briefly inserted into the lower pharynx via the nasal cavity. The blood samples were taken immediately after hospitalization. The laboratory data of leukocyte count, percentages of lymphocytes and neutrophils, and detection of common viruses were collected.

PCR Detection of B. pertussis

B. pertussis DNA was detected in NPAs by real-time PCR assays. The primer sequence was synthesized by Shanghai Sangon Biotech Company. The pertussis PtxA-pr and IS481 gene sequences were used as specific primers (Table 1). The RT-PCR assay result was considered negative if the cycle threshold (CT) was ≥40. Specimens that tested positive by PCR for both insertion sequence IS481 (CT < 40) and ptxS1 (CT < 40) were considered positive for B. pertussis. If a specimen was PtxA-pr target negative with an IS481 assay CT < 35, it was also considered positive for B. pertussis.

Data were shown as mean ± standard deviation and median and interquartile range. Quantitative variables among the three age groups were compared using one-way analysis of variance or the Kruskal–Wallis test when appropriate. Frequency distribution was compared by the chi-square test. A p value <0.05 was considered as a significant difference.

Figure 1. Distribution of B. pertussis infection in infants and young children stratified by age.

Seasonality of B. pertussis Infection 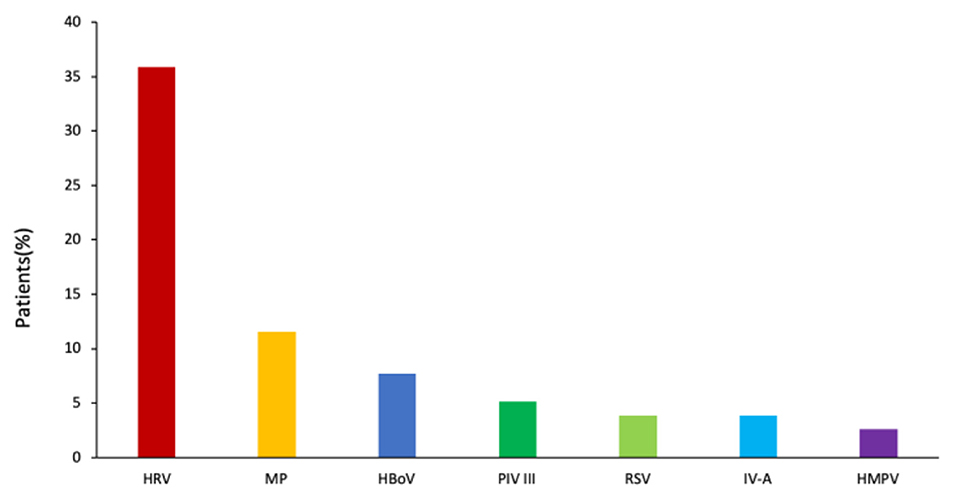 Figure 3. Distribution of pathogen coinfections associated with B. pertussis infection.

Clinical Features of B. pertussis–Only Infection Compared With Infections With Other Pathogens 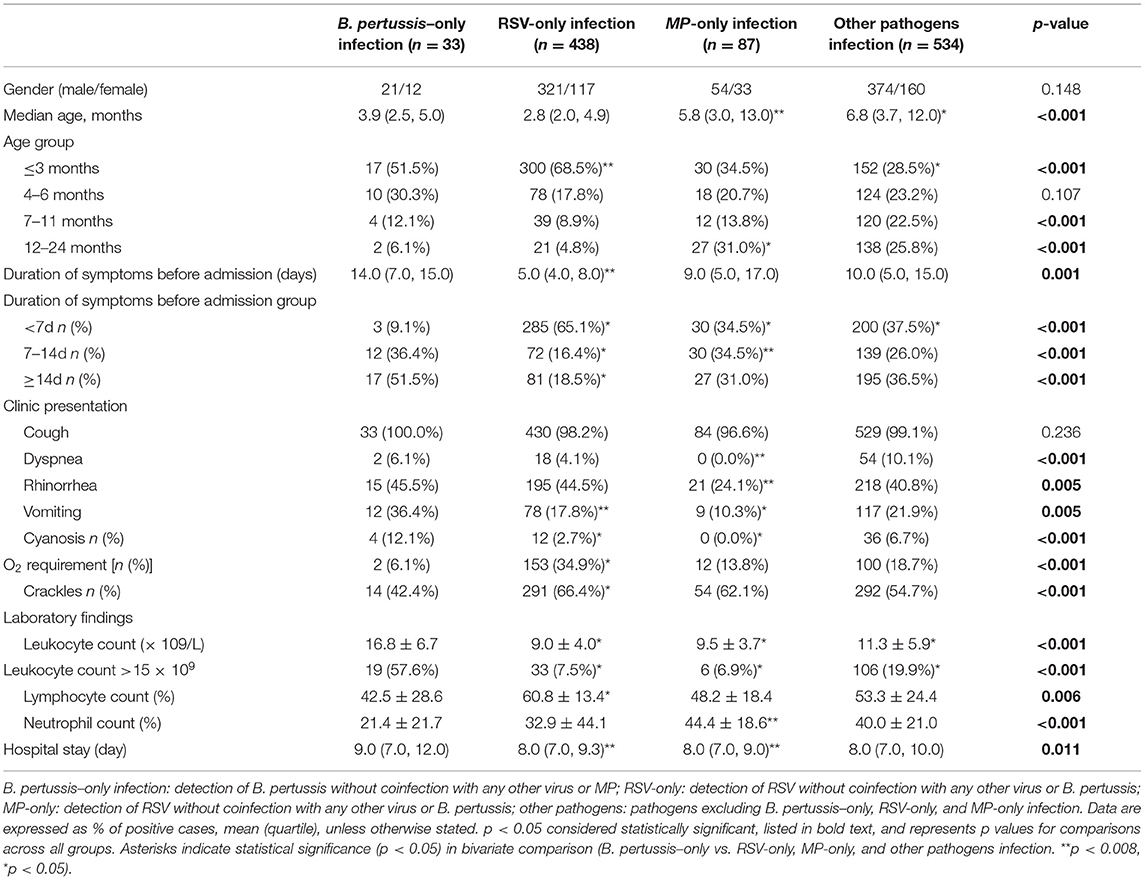 Table 2. Select characteristics of hospitalized children with B. pertussis-only infection compared with RSV-only, MP-only, and other pathogens infection (n = 1,092).

B. pertussis Infection and Results of Laboratory Examination in Different Age Groups

Table 3. Clinical characteristics and results of laboratory examination among the different age groups with B. pertussis infection.

Clinical Features of B. pertussis–Only Infection Compared With Coinfection

Table 4. Comparison between B. pertussis–only infection and coinfection.

Pertussis is a vaccine-preventable respiratory disease. B. pertussis could affect all individuals, but the highest morbidity and mortality rates were among newborns and unvaccinated or incompletely vaccinated young infants (21, 25, 26). In the present study, the morbidity of B. pertussis was common (31/78, 39.7%) in infants with bronchiolitis who had been unvaccinated (infants ≤3 months). The unvaccinated infants were associated with a longer hospital stay and more likely to require supplemental oxygen. Studies suggested that early identification and treatment of B. pertussis could shorten the duration of paroxysmal cough (27, 28), and antibiotics against pertussis could limit the severity of disease if started in the catarrhal phase (27, 29). In addition, several systematic reviews confirmed the safety and effectiveness of maternal pertussis vaccination during pregnancy (30–32). Therefore, it is important to early recognize and initiate treatment.

The studies involving human participants were reviewed and approved by Ethics committees of Children's Hospital Soochow University (Approval No.: 2016026). Written informed consent to participate in this study was provided by the participants' legal guardian/next of kin.

WJ and SC wrote the main manuscript text. CH and YW designed the study and revised the manuscript. ZC and MW carried out the initial analyses. XS and JX performed the microbiological detection. AL and QX performed the data collection. All authors read and approved the final manuscript.

Copyright © 2021 Chen, Wang, Li, Jiang, Xu, Wu, Chen, Hao, Shao and Xu. This is an open-access article distributed under the terms of the Creative Commons Attribution License (CC BY). The use, distribution or reproduction in other forums is permitted, provided the original author(s) and the copyright owner(s) are credited and that the original publication in this journal is cited, in accordance with accepted academic practice. No use, distribution or reproduction is permitted which does not comply with these terms.