Methods: This was a prospective, single-site, observational study from May 2017 to November 2019, performed at a tertiary care neonatal intensive care unit in a German academic teaching hospital. All endotracheal intubation encounters performed by the neonatal team were recorded.

In our unit, intubations are performed by an interprofessional team, usually consisting of a neonatal nurse, a pediatric resident and a neonatologist. Nasotracheal intubation is commonly performed as a two-step procedure. First, the endotracheal tube (ETT) is carefully introduced 4–5 cm through the nose. Prior to inserting the laryngoscope, bag ventilation and pre-oxygenation is performed via the inserted ETT. Finally, the glottis is visualized via direct or videolaryngoscopy and the ETT is advanced through the vocal cords with the help of a Magill forceps. Correct insertion of the ETT is verified clinically (auscultation, adequate chest excursions) and subsequently via chest X-ray.

During the study period, no written standard operating procedure was available. Pediatric residents were usually performing the first intubation attempt. Although not specified, usually not more than 2-3 failed attempts were allowed until a more experienced physician took over. Two types of ETTs were used. Cuffless, transparent Vygon tubes with a lateral port for surfactant delivery were usually used in the delivery room, while cuffless, transparent, Mallinckrodt tubes without a lateral port were used for re-intubations in the NICU. If given, premedication consisted of a fentanyl, and/or diazepam, and vecuronium. Dose regimes were variable.

All live born infants intubated by the neonatal team were included in the analysis. An intubation encounter was defined as the whole course from preparation to final ETT placement and verification of the correct tip position via chest x-ray. Each insertion of the laryngoscope into the oral cavity was defined as an intubation attempt.

The local ethics committee of the Rhineland-Palatinate Medical Association approved this study. A waiver of informed consent was granted. Participants were not subjected to any study-related measures. The study is registered at the German clinical trial database DRKS (identifier: DRKS00013575).

The study was designed to last 24 months. It was expected that TIAEs would occur in 40% of intubations. The true relative frequency should be estimated with an accuracy of 10%. The power calculation was based on a two-sided 95% confidence interval with an approximate normal distribution. A minimum sample size of 93 patients was calculated. 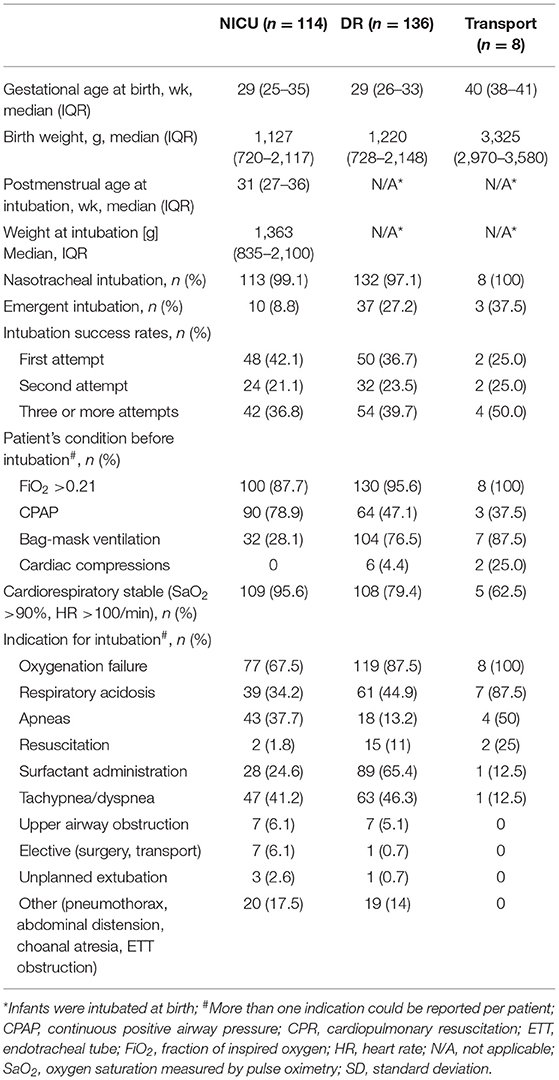 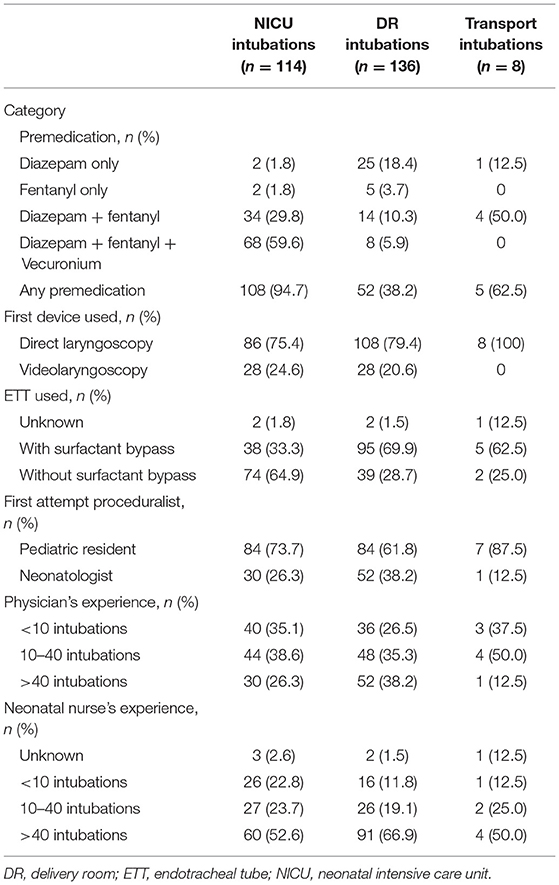 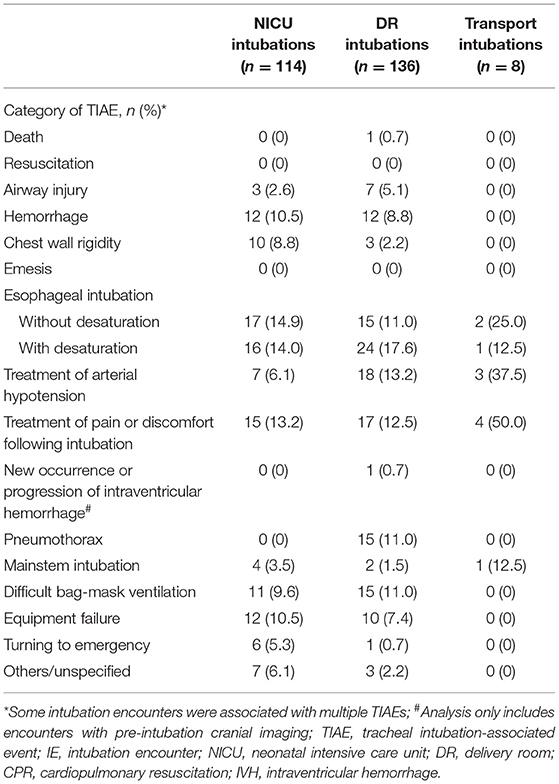 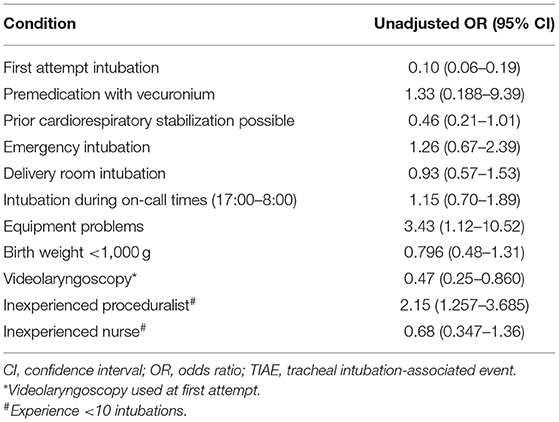 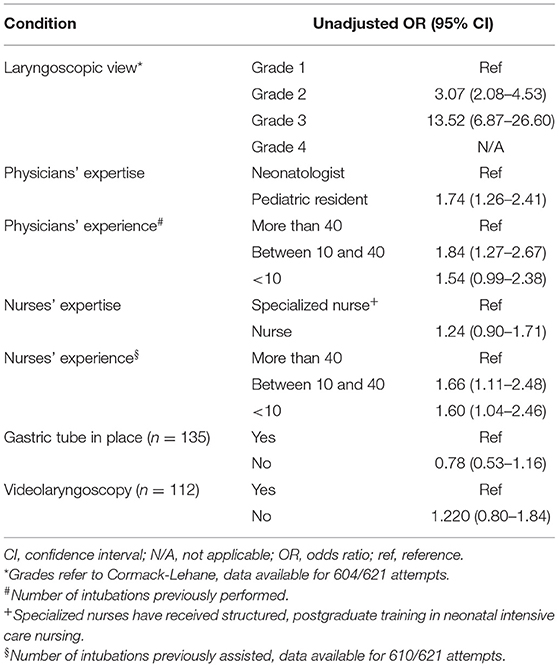 First-pass success rates, frequency of TIAEs and desaturations and bradycardias are the hallmarks of intubation quality. When compared to older children and adults, neonatal intubations appear to be remarkably more difficult and associated with more TIAEs (12, 13). This does not necessarily arise from anatomy and physiology. Neonates have small airways and anatomic peculiarities when compared to adult airways, but they typically do not have difficult airways (14). It must be acknowledged that neonates that need to be intubated are often cardiorespiratory unstable. Only one study found a gestational age <32 weeks and a birth weight <1,500 g to be associated with difficult intubations (6). In our study, extremely low birth weight and emergent intubations were not associated with lower success rates and higher rates of TIAEs, respectively. We did observe a high rate of equipment failures as well as an association of equipment failures with TIAEs. Quality improvement initiatives may improve success rates and reduce TIAEs (15). The frequency of TIAEs was reduced in one center following implementation of an intubation checklist and a time-out procedure (16). In addition, quality improvement might not only improve immediate patient safety but also long-term outcomes. There is some evidence from retrospective analyzes that successful first attempt intubation is associated with less intra-ventricular hemorrhage (IVH) in very preterm infants (17). Others did not observe this association but found DR intubations to be associated with higher odds of death and severe neurological injury when compared to NICU intubations (18).

In our study, use videolaryngoscopy and intubation by experienced proceduralists were predictive of intubation encounters without TIAEs. Videolaryngoscopy may help to prevent intubation failure and may also improve proper initial tube insertion depth. It is conceivable that facilitating the visualization of the larynx reduces mechanical stress and tissue damage of the upper airway and so increases patient comfort during the intubation procedure. In retrospective analysis, videolaryngoscopy was associated with fewer intubation-related adverse events (19). In small children, beyond the neonatal period and in a preoperative setting, videolaryngoscopy has been shown to reduce complications and improve success rates in a large multicenter randomized controlled trial (RCT) (20). Adequately powered RCTs will be required to study the effects of videolaryngoscopy in the neonatal intensive care setting.

We acknowledge the limitations of the study, which are basically its single-center and its observational design. Associations observed in this study do not allow conclusions on causalities but do generate hypotheses for further interventional studies. A particular strength of the study represents the complete recording of all consecutive intubation encounters and the detailed documentation of each particular intubation attempt.

The studies involving human participants were reviewed and approved by Ethics Committee of the Rhineland-Palatinate Medical Association, Deutschhausplatz 3, 55116 Mainz, Germany. Written informed consent from the participants' legal guardian/next of kin was not required to participate in this study in accordance with the national legislation and the institutional requirements.

We would like to thank all participating families and the members of the neonatal team for their great support of this study. This study was part of a doctoral thesis of one co-author (MH).

The Supplementary Material for this article can be found online at: https://www.frontiersin.org/articles/10.3389/fped.2021.675238/full#supplementary-material

Copyright © 2021 Tippmann, Haan, Winter, Mühler, Schmitz, Schönfeld, Brado, Mahmoudpour, Mildenberger and Kidszun. This is an open-access article distributed under the terms of the Creative Commons Attribution License (CC BY). The use, distribution or reproduction in other forums is permitted, provided the original author(s) and the copyright owner(s) are credited and that the original publication in this journal is cited, in accordance with accepted academic practice. No use, distribution or reproduction is permitted which does not comply with these terms.