Conclusion: This study showed that preoperative LVEDVi could predict LCOS after surgical closure of ASD with small-sized LV with a well-defined cutoff. The best cutoff value of LVEDVi to predict the occurrence of LCOS after surgical ASD closure was 53.5 ml/m2.

Secundum Atrial Septal Defect (ASD) is one of the most common congenital heart defects in children and adults (1, 2). Krumsdorf et al. (3) showed that the incidence of ASD continues to increase each year (3). ASD represents 10% of congenital heart defect cases and 20–40% of congenital diseases in adults. According to the data from National Cardiovascular Center Harapan Kita (NCCHK) Indonesia, the prevalence of ASD in 2018 is 691 cases, of which 80 cases already had surgical closure, and the mortality rate was 7%.

After the closure of ASD, the left-to-right shunt from the left atrium to the right atrium will stop and the blood will start to flow from the left atrium to the left ventricle. Due to volume underload prior to the ASD closure, a sudden increase of blood volume to the previously small-sized left ventricle after the surgical closure will cause a diastolic dysfunction leading to a circulatory failure (3). Hence, the left ventricle will be unable to pump blood to the systemic circulation and the oxygen delivery will decrease. Therefore, after ASD closure, a decrease in cardiac output may be observed and cause postoperative low cardiac output syndrome (LCOS), which is associated with significant morbidity and mortality (3, 6).

Surgical ASD closure was done either by pericardial patch or by direct closure. Tricuspid valve repair was done with ring annuloplasty/Kay procedure on the patient who develops moderate/severe tricuspid valve regurgitation. Mitral repair was done on a patient with severe mitral regurgitation. Aortic cross-clamp time and cardiopulmonary bypass machine time were measured. The postoperative LCOS was assessed by a combination of clinical parameters and laboratory findings, such as the presence of a minimum of two clinical findings (tachycardia, oliguria, or poor peripheral perfusion) and/or a central venous saturation <60% (oxygen extraction ratio higher than 40%), with or without metabolic acidosis or increased lactate levels, resulting in an escalation of therapy. This syndrome was evaluated and confirmed by our cardiac intensivist.

Data were collected and then analyzed using SPSS software Version 20.0. The data normality was assessed using Kolmogorov–Smirnov. Independent Student's t-test was used for bivariate analysis with normal data distribution; otherwise, Mann–Whitney test was used as a non-parametric test. The receiver operating characteristic (ROC) curve was used as a diagnostic test analysis to get the cutoff point between the LVEDVi value and the LCOS cases. Thus, we obtained the cutoff points and area under the curve (AUC). The Youden index was used to identify the best cutoff point (J = Sensitivity + Specificity – 1). 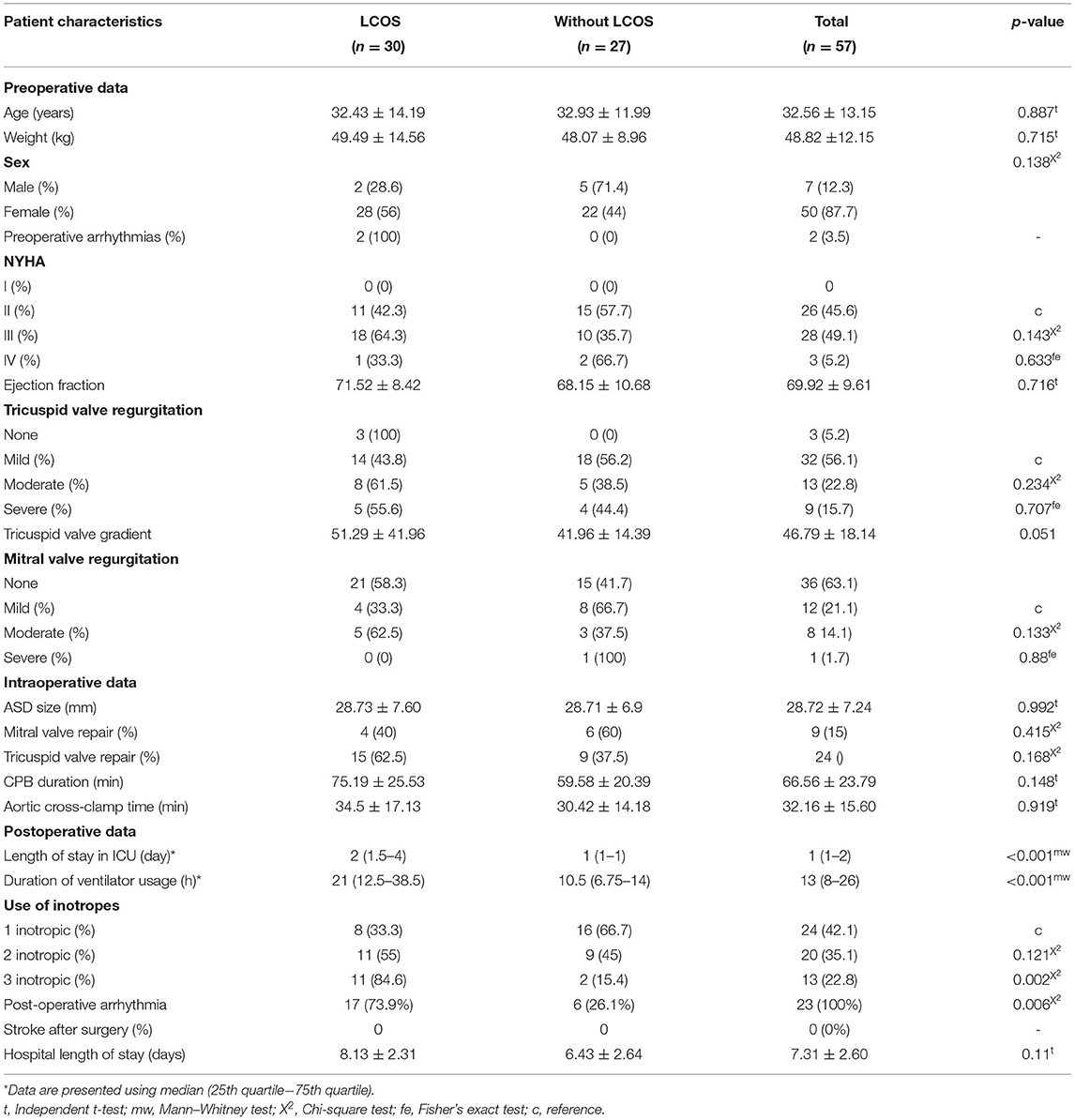 Bivariate analysis was done for MRI parameter values and LCOS occurrence after the surgical closure of ASD. MRI parameter values were distributed normally. It showed that the LVSV, LVSVi, LVEDV, LVEDVi, LVESV, and LVESVi values were significantly lower in patients with LCOS (p < 0.05) (Table 2). However, no significant difference was found between the right ventricle ejection fraction and volume parameter across the two groups. 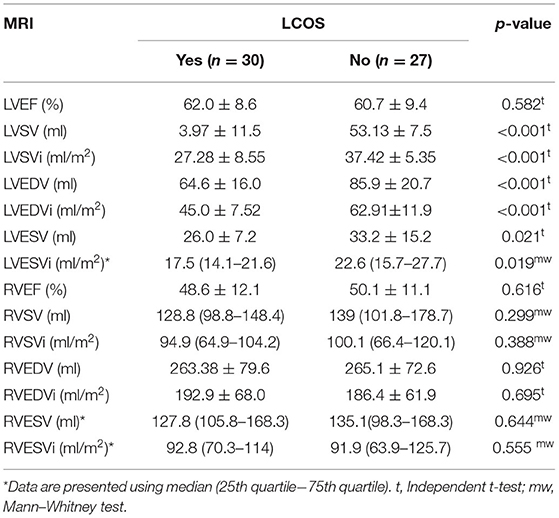 Table 2. Association between MRI parameter values and the occurrence of LCOS.

Figure 1. Comparison of AUC between LVEDVi (purple), LVEDV (brown), LVSVi (green) and LVSV (blue) for the occurrence of postoperative LCOS (A) and after exclusion of moderate-severe mitral valve regurgitation (B).

ROC analyses of LVEDVi, LVEDV, LVSV, and LVSVi value with the exclusion of moderate to severe mitral valve regurgitation subjects were done (Figure 1B) and optimal cutoffs of these variables were obtained (Supplementary Table 1). The best AUC was found on LVEDVi (AUC 96.2% CI 91.7–100%). We found that the best cutoff for LVEDVi was on the same value 53.3 ml/m2 with higher sensitivity (88.0%) and specificity (87.0%). However, the optimal cutoff point of LVSV showed lower with lower sensitivity (88.0%) and specificity (78.3%), given the same optimal cutoff (48.7 ml/m2).

LCOS occurs when there is a decrease in cardiac output caused by temporary myocardium dysfunction. LCOS may occur several hours after using a cardiac bypass machine, causing a decreased myocardium function due to increased cardiac output demand (10). If LCOS is not promptly recognized and treated, progression toward organ dysfunction is inevitable, leading to higher morbidity, prolonged intensive care and hospitalization, and mortality (11).

Out of 57 ASD patients in this study, more than half of the population (52.6%) had LCOS. However, Chandler et al. (12) reported that 25% of child population had a reduced cardiac index 6–8 h after an open heart surgery (12). The gap between the studies may have resulted from the particular inclusion ASD with small-sized LV, which is notably attributed to the late-presenting patients; therefore, higher proportion is expected. The mean value of age was 32.56 ± 13.15 years old, and our entire population showed signs of heart failure preoperatively (NYHA II 45.6%; NYHA III 49.1%; NYHA IV 5.2%). The average age of patients with NYHA II was older than that of patients with NYHA class III and IV. This indicates that the symptoms of heart failure in younger patients with large ASD were exacerbated by the lung overflow. The high occurrence of post-operative LCOS in older patients might be due to longer exposure of the underloaded left ventricle. Meanwhile, Chandler et al. did their study on infants without discussing the presence of heart failure before surgery.

Until now, no research had explained the significance of MRI parameters, especially LVEDVi, toward the postoperative LCOS incidence. Stephensen et al. reported that the MRI parameters in ASD patients for LVEDVi (82 ± 12 vs. 103 ± 14; p < 0.001) and LVESVi (35 ± 11 vs. 48 ± 8; p < 0.01) were significantly lower compared to the healthy subjects at rest (13). Compared to our study, in this ASD with small-sized LV population, we found that the LVEDVi value was lower especially in the LCOS group (45.0 ± 7.52). This could explain the high incidence of LCOS due to the underloaded LV preoperatively. Furthermore, moderate to severe mitral valve regurgitation combined with ASD could also affect the LV to become more small-sized due to an underpressured left ventricle with the backflow to the left atrium. However, in our subject, we had a similar proportion of mitral valve regurgitation in both LCOS and non-LCOS group. ROC analysis with the exclusion of moderate to severe mitral valve regurgitation subjects found that the best cutoff for LVEDVi was the same, 53.3 (AUC 96.2% CI 91.7–100%), with higher sensitivity (88.0%) and specificity (87.0%).

To our knowledge, this study was never done before and may become a pilot study for further studies. Our study has shown a diagnostic test with an excellent result, which is applicable to clinical practices. Considering the cutoff value, physicians can determine the management strategy to anticipate the occurrence of LCOS post-surgical ASD closure. In our practice, the prediction of LCOS based on the preoperative measurement will give us the benefit of managing the availability of post-operative care resources. This will also give us guidance to do aggressive management of the small-sized left ventricle such as (1) leaving/creating a small ASD after complete closure of ASD intraoperatively (in order to reduce high left atrial pressure due to left ventricle dysfunction postoperatively), (2) utilizing left atrial pressure monitoring line during and after the operation to avoid left venticular failure, (3) placement of a temporary atrial pacemaker to increase the heart rate in order to avoid distention of the left venticle postoperatively, and/or (4) aggressive systemic afterload reduction with phosphodiesterase III inhibitors to improve LV function postoperatively.

The limitation of this study was that our subjects only focused on the ASD patient with small-sized LV, so the data implementation will be less representative of the overall population admitted for ASD closure. Regardless, this study provided a new insight related to management of patients with late-presenting ASD particularly with the small-sized LV condition. Some of our subjects had already achieved LCOS treatment on the small-sized LV through ACE inhibitor as the afterload reduction, which then becomes the confounding variable. Other confounding variables in our study were valvular regurgitations and post-surgical pulmonary hypertension. In this study, we only assessed one morbidity, which was LCOS. There are lots of morbidities that may occur after heart surgery such as arryhythmia, stroke, prolonged ventilator use, pulmonary hypertension, pulmonary edema, and death. Further studies with larger sample, multi-center and preferably the cohort are needed to evaluate and validate the LVEDVI cutoff value of this study.

Written informed consent was obtained from the individual(s), and minor(s)' legal guardian/next of kin, for the publication of any potentially identifiable images or data included in this article.

The Supplementary Material for this article can be found online at: https://www.frontiersin.org/articles/10.3389/fped.2021.705257/full#supplementary-material

Copyright © 2021 Rahmat, Dwita, Arya Wardana and Lilyasari. This is an open-access article distributed under the terms of the Creative Commons Attribution License (CC BY). The use, distribution or reproduction in other forums is permitted, provided the original author(s) and the copyright owner(s) are credited and that the original publication in this journal is cited, in accordance with accepted academic practice. No use, distribution or reproduction is permitted which does not comply with these terms.