Background: Sepsis is one of the most important causes of morbidity and mortality in the neonatal period, especially in preterms. Diagnosis is difficult because of specific signs and symptoms. The diagnostic gold standard is blood culture, but its sensibility is low. Much effort has been made to identify early, sensitive, and specific diagnostic markers; among these markers particular attention was paid to procalcitonin. However, reference ranges of serum procalcitonin (PCT) shortly after birth have not been sufficiently studied in healthy preterms, and literature is still contradictory.

Objectives: The aim of the study is to define PCT age-specific reference ranges in the first 72 h of life in uninfected VLBW preterms.

Methods: Serum levels of PCT were assessed for each newborn at birth and every 24 h until the 3rd day of life. The eligible patients were classified into two groups according to their sepsis status.

Results: Approximately 343 patients were enrolled; 28 were septic and 315 non-septic. In non-septic infants, 1,015 determinations of PCT values were performed. Our data showed a trend in average value of PCT to increase after birth up to a peak between 24 and 48 h of life and, subsequently, to fall. The average peak value was 15.12 ng/ml achieved at nearly 36 h of life.

Conclusion: Our study shows a PCT nomogram of healthy preterms, which is different from the one of term newborns. Data agree with what is reported in literature on the reference ranges and trends of PCT in non-septic preterms shortly after birth.

Neonatal sepsis is a clinical syndrome characterized by systemic signs and symptoms of infection and by the presence of pathogen agents in blood, which occurs in the first 28 days of life (1).

Neonatal sepsis still represents an important cause of mortality and morbidity among infants, above all in very low birth weight (VLBW, birth weight < 1,500 g) preterm infants, with an incidence ranging from 1 to 20/1,000 live births (2), with a mortality of 11–19% and unquantified long-term neurological defects (3).

According to time of infection, we can distinguish early onset sepsis (EOS), during the first 72 h of life, and late onset sepsis (LOS) after 72 h from delivery.

Neonatal sepsis presents common and unspecific clinical manifestations so that an infant with a suspect for sepsis requires rapid assessment to guarantee rapid therapy. Blood culture remains the gold standard for diagnosis, but data available from two large randomized controlled trials in recent years have shown culture-negative sepsis rates of 56 and 46%, respectively (4).

Blood culture negative, clinically diagnosed sepsis accounts for the majority of these cases, which is problematic because the definition of clinical sepsis is variable and often includes subjective signs on the physical exam (5).

There are many different biomarkers that have been discovered to be of help in the early diagnosis of neonatal sepsis. Nevertheless, high variability in sensitivity and specificity of those markers is reported in literature; this may be due to many factors, such as gestational age, birth weight, cut-off used, and time of blood sampling. Presently, procalcitonin (PCT) and CRP are the most commonly used and have been studied in numerous neonates (6).

Procalcitonin usefulness in EOS remains uncertain, despite its wide use in LOS. PCT differs from CRP for a faster kinetic: Its release from tissues increases during infections more rapidly than CRP and can be detected in circulation within 2–4 h, with peak concentrations achieved after 6–8 h and a half-life of 20–24 h (7).

Several studies have reported the usefulness of serum procalcitonin (PCT) as a potential biomarker for bacterial infections in adults and children, and the reference range is less than 0.1 ng/ml, while the cut-off value for the diagnosis of bacterial infections or sepsis has been established at 0.5 ng/ml. During bacterial or fungal infections, the PCT increased up to 2 ng/ml or even 50–100 ng/ml (8).

These values concern children but not newborns during the 1st days of life, when we can find a physiologic peak of PCT in non-infected newborns (which, in many cases, is more evident 24 h after birth) (9), which makes difficult the interpretation of laboratory data in the first 72 h of life.

The PCT reference range during the neonatal period varies greatly depending on gestational age and infectious status. Its values in EOS are considerably higher than those of non-infected infants, and many studies report different age-related nomograms for both term infants and preterms (9–12). Anyway, the literature highlights a huge heterogeneity between studies and low methodological quality due to: arbitrary cut-offs used to differentiate infectious and non-infectious conditions; heterogeneity in study groups; PCT response assessed in neonates with different postnatal ages without consideration of gestational age (GA) and birth weight (BW); absence of data on how severity of underlying illness might have hampered PCT response. Therefore, more studies are needed to determine its usefulness in diagnosing EOS.

In our study, we investigated the 95% age-specific reference intervals of PCT values in the first 72 h of life in VLBW preterm infants.

Our study population consists of 343 preterm newborns enrolled over 4 years (2017–2020) in the Neonatal Intensive Care Unit (NICU) of Santa Chiara University Hospital of Pisa (Italy). Inclusion criteria were GA ≤ 32 weeks + 6 days and/or birth weight ≤ 1,500 g. Absolute exclusion criteria were exitus within 48 h of life, asphyxia, outbirth with transfer to our Center after 4 h of life and absence of informed consent.

The patients were divided into 2 groups based on the presence or absence of EOS: (1) non-septic and (2) septic. In Group 2 were included infants with:

To all enrolled patients, empirical antibiotic therapy (ampicillin + sulbactam and gentamicin) was administered from birth to 72 h if EOS was excluded or prolonged for 7–14 days in relation to sepsis.

Procalcitonin measurements were performed at birth and every 24 ± 4 h until the 3rd day of life. For all patients were recorded gender, GA, BW, weight percentile, 5-min Apgar score, intubation in delivery room. In combination with PCT, it was always measured CRP. In all newborns, we also examined WBC, liver and kidney function, blood and skin swabs culture, and chest X-ray at birth.

Procalcitonin serum assays were performed on samples of blood taken with microtubes in K2-EDTA or in lithium-heparin. The PCT blood concentration was measured by the immunometric electrochemiluminescence technique (Elecsys BRAHMS PCT instrument). According to the EP05-A protocol of the Clinical and Laboratory Standards Institute (CLSI), the inter- and intra-assay coefficients of variation (CV) were, respectively, ≤2.1 and 2.4%.

In accordance with the literature, we analyzed the natural logarithm of PCT values (lnPCT). To determine the PCT reference range in the 1st 72 h of life in non-septic preterm infants, we built a graph with the 95% CI. To compare means of two independent groups, we used t-test for independent samples (two-tailed).

Significance was defined as p < 0.05. SPSSv.27 technologies were applied.

Over the study period, we enrolled 364 preterm infants. Among them, 6 died within the 1st 24 h of life and were not included in the study. Of the 358 remaining patients, 15 were excluded due to perinatal asphyxia. The analysis was drawn up on 343 infants, of which 163 were girls and 180 were boys. Of these, 315 were non-septic, and 28 were septic. The two groups resulted statistically homogeneous relatively to GA, BW, and gender.

Construction of the reference range

We performed 1,015 determinations of PCT values in non-septic infants group in the first 72 h of life. We built the distribution curve of PCT using these values. Our data showed a trend in average value of PCT to increase after birth up to a peak between 24 and 48 h of life and, subsequently, to fall (Figure 1). We constructed graphs using a cubic model. The average peak value was 15.12 ng/ml achieved at nearly 36 h of life. 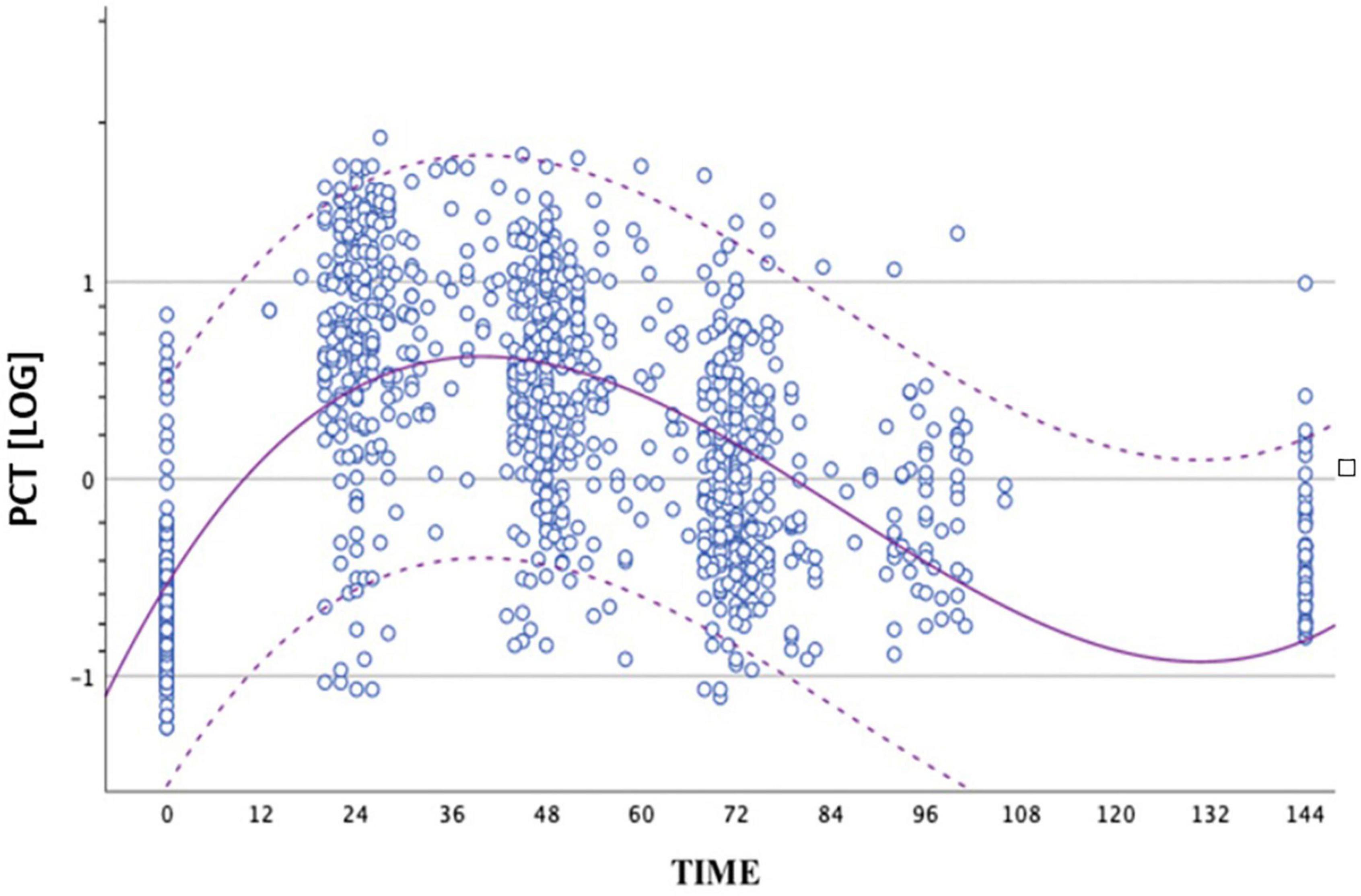 Figure 1. Distribution of PCT values obtained from the group of non-septic newborns between birth and 72 ± 4 h of life. The circles represent the logPCT values. The dashed curves represent the upper and lower limits of the reference range. The continuous curve represents the geometric mean. The logarithmic scale of the PCT values is shown on the ordinate axis.

We made comparison of lnPCT values at t1 and t2 for categories of GA and BW. The only significant difference was detected between GA categories at t2 (t = 2.270; p = 0.030), with higher values in the GA < 30 weeks group.

The main purpose of this study was to determine age-related reference intervals for PCT in VLBW preterms during the early neonatal period because there is, still, a huge heterogeneity between studies in literature.

Chiesa et al. reported a peak of 20 ng/ml for healthy term infants at 24 h of life; (10) Altunhan et al. did not distinguish between term and preterm newborns and described a peak of 5.38 ng/ml in the first day of life in septic patients; (11) more recently, a Turkish study has reported in the 1st few hours of life a cut-off value of 1.4 ng/ml for preterm septic newborns with a gestational age between 23 and 36 week (11), and a Japanese study described a cut-off value at 24 h of life of 11.1, 1.2, and 2.2 ng/ml, respectively, for VLBW, late-preterm, and term babies (12).

In our study, a statistically significant difference in PCT values between septic and non-septic patients was found out at all times analyzed. This difference let us construct an age-related nomogram for PCT concentration in a large cohort of non-infected VLBW preterm infants.

Other studies show differences in PCT concentration according to gestational age (12), so we decided to stratify the nomograms according to gestational age and birth weight too. Reference curves stratified by weight and age show that at lower gestation, ages correspond highest, later and longer peaks, and at lower weights, peaks are lower and later. Despite GA and BW are variables closely related, the trend of PCT is different between smaller GA and BW categories. Partly, this is possibly due to greater presence of SGA infants in our BW > 1,000-g group compared to that with weight ≤1,000 g, even if it is only borderline significance (p = 0.052).

Reports on preterm infants suggested that the physiological rise in PCT concentration of preterm infants may be longer and higher than in term infants. In our cohort, the peak value was actually longer but not higher than that reported in literature for term infants (9, 10), and values at 72 h of life were higher, taking longer to return to normal values. These results could be explained in immature systems and metabolism of the preterm newborns, resulting in delayed kinetics.

In conclusion, we reported reference ranges for serum PCT concentrations in healthy VLBW preterm newborns during the first 3 days after birth, and we developed an age-related nomogram.

A major limitation of this study is that we did not investigate how the severity of underlying illnesses might have hampered PCT response nor the possible influence of newborns factors, such as respiratory failure, which, in literature, is reported as the main effect or for the transient elevation in serum PCT levels in 1st days of life (13). So further studies are needed to confirm the accuracy of this nomogram.

The studies involving human participants were reviewed and approved by the Regional Ethics Committee of Tuscany – Pediatric Section. Written informed consent to participate in this study was provided by the participants’ legal guardian/next of kin.

The Supplementary Material for this article can be found online at: https://www.frontiersin.org/articles/10.3389/fped.2022.925788/full#supplementary-material

Copyright © 2022 Tuoni, Ciantelli, Morganti, Violi, Tamagnini and Filippi. This is an open-access article distributed under the terms of the Creative Commons Attribution License (CC BY). The use, distribution or reproduction in other forums is permitted, provided the original author(s) and the copyright owner(s) are credited and that the original publication in this journal is cited, in accordance with accepted academic practice. No use, distribution or reproduction is permitted which does not comply with these terms.