Meningococcal meningitis is a bacterial meningitis caused by Neisseria meningitidis, which is non-spore-forming, non-motile, gram-negative cocci. While headache, fever, nausea, and vomiting occur in meningococcal meningitis as in other febrile illnesses, shock, petechiae and purpuric skin rashes are its major characteristics (1, 2). Case fatality may exceed 20% (1), and severe neurological sequelae exceeded 5% (3) in a resource-rich setting. Seasonal epidemics of meningococcal meningitis occur worldwide (4), but its burden of disease in Africa is estimated to exceed that of trypanosomiasis, Chagas disease, schistosomiasis, leishmaniasis, lymphatic filariasis, onchocerciasis, leprosy, and dengue combined (5). Historically, meningococcal meningitis was first described in Europe in 1805, in USA in 1806, and in Sahel Africa in 1905, but several epidemics and pandemics occurred in the 19th and 20th centuries (6). In 1963, the meningitis belt was described in Sahel Africa (7), where most cases occur annually during the dry seasons. In addition to seasonal epidemics, cyclical epidemics occur every 8–12 in the Sahel (1), but the determinants are unknown.

Intensities of El Niño, the warm phase of El Niño-Southern Oscillation (ENSO), determine changes in precipitation in the Sahel (8), several parts of Africa (9), and other parts of the world (10). The intensities of ENSO vary on interannual and interdecadal timescales, while the Pacific Decadal Oscillation (PDO), which modulates the ENSO, varies predominantly on interdecadal timescale (11). Climate regimes are defined by the warm or cool modes of the PDO, which persists for decades (12). El Niños dominate warm climate regimes, while La Niñas, the cool phase of ENSO, dominate cool climate regimes (13). The strong relationship of low precipitation to occurrence of meningococcal meningitis, which is highest in the arid to semi-arid Sahel where annual rainfall is between 100 mm and 600 mm (14), suggests that determinants of global changes in precipitation will covary with the epidemics. The objective of the study was to determine if there is spectra coherence of seasonal, interannual, and interdecadal changes in occurrence of meningococcal meningitis in Sahel, Central, and East Africa with interannual and interdecadal changes in PDO and ENSO.

Multivariate El Niño-Southern Oscillation Index (MEI) data, which were computed from sea-level pressure, zonal and meridional components of the surface wind, sea surface temperature, surface air temperature, and total cloudiness fraction of the sky of the South Pacific Ocean (15) from 1950 to 2014 were downloaded from the website of National Oceanic and Atmospheric Administration1 (NOAA), USA, while intensities of El Niños from 1950 to present time were assessed using the Oceanic Niño Index (ONI) downloaded from http://ggweather.com/enso/oni.htm. Ranks of El Niño from 1871 to 1949 from http://www.esrl.noaa.gov/psd/enso/mei.ext/rank.ext.html, and from 1950 to 2014 from http://www.esrl.noaa.gov/psd/enso/mei/table.html. Pacific Decadal Oscillation Index was downloaded from the Joint Institute for the Study of the Atmosphere and Ocean Arctic Oscillation website2.

Sahel precipitation data from 1900 to 2013 were obtained from the Joint Institute for the Study of the Atmosphere and Ocean (16). The precipitation index is anomalies with respect to 1950–79.

Time series were fitted to indices of ENSO, PDO, and Sahel precipitation, and to occurrence of meningitis. Autocorrelation and partial autocorrelation tests, and lag plots were applied to exclude white noise and to inspect for seasonality. Stationarity was assessed using the unit root test. To determine month of peak occurrence of meningitis annually, the monthly data from 2006 to 2014 were rescaled to 0–1 values for each year, and plotted.

Wavelet methods which have been applied to epidemiological (17, 18), human (19), and environmental data (20, 21) were applied to the time series of this study. Time series were transformed to time-frequency domain using Morlet wavelet, which was defined as follows (17, 18):

with uniform time steps δt was defined as the convolution of xn with the scaled and normalized wavelet (17, 18). The cross wavelet transform was defined as follows (17, 18):

where Zv (p) was the confidence level associated with probability p, and and were the power spectra. The wavelet coherency phase was (17, 18)

The global wavelet spectra, the equivalent of the Fourier power spectrum smoothed by the Morlet wavelet function (17, 22), were

Phase plots were drawn to determine phase shift between the time series.

The Granger causality test was performed to determine if ENSO precedes occurrence of meningococcal, or otherwise. The model used for the calculation is as follows:

. The data used were the monthly occurrence of meningococcal meningitis in the Sahel.

Historical occurrence data of meningococcal meningitis before 1965, the commencement of this study, were obtained from the literature (6, 23). The strength of El Niño at the time of each epidemic was determined.

WHO Criteria for Associating ENSO with Health

The following criteria of the WHO for linking health problems with ENSO activity (24) were considered in the design of this study: (a) Climatological evidence of appropriate teleconnections or direct effects of ENSO in the area of interest. (b) Biological evidence that the diseases or other health impacts of interest have a plausible biological link with weather exposures (precipitation, land surface temperature, sea surface temperature), e.g., field studies of vectors which examine their abundance in relation to the ENSO cycle. (c) Statistical analyses which show that disease incidence or epidemics vary over time with the ENSO cycle.

Statistical analyses were performed using the R Statistical Programing and Environment (25). Specifically, wavelet analyses were performed using the biwavelet package, phase plots using the WaveletComp package, and graphics using the ggplot2 package. Statistical significance of spectra periodicity was determined as defined in (17, 18). Briefly the time series is assumed to have a mean power spectrum, which is possibly red noise. The null hypothesis is that any peak on the power spectrum is not significant above the background spectrum. The desired level of significance in this study was set at 0.01% level. The R MSBVAR package was used for Granger causality test.

The study areas are shown in Figure 1. Time series of monthly occurrence data in the Sahel shows regular annual peaks, but a very large peak in 2009 (Figure 2). Amplitude of peaks reduced from 2012 to 2014. Yearly plots of the monthly data show highest peaks of occurrence from March to May, and very low peaks from August to November (Figure 3). El Niños during the study period were strongest in 2009–2010, while La Niñas dominated the period of lowest amplitude of occurrence from 2012 to 2014. 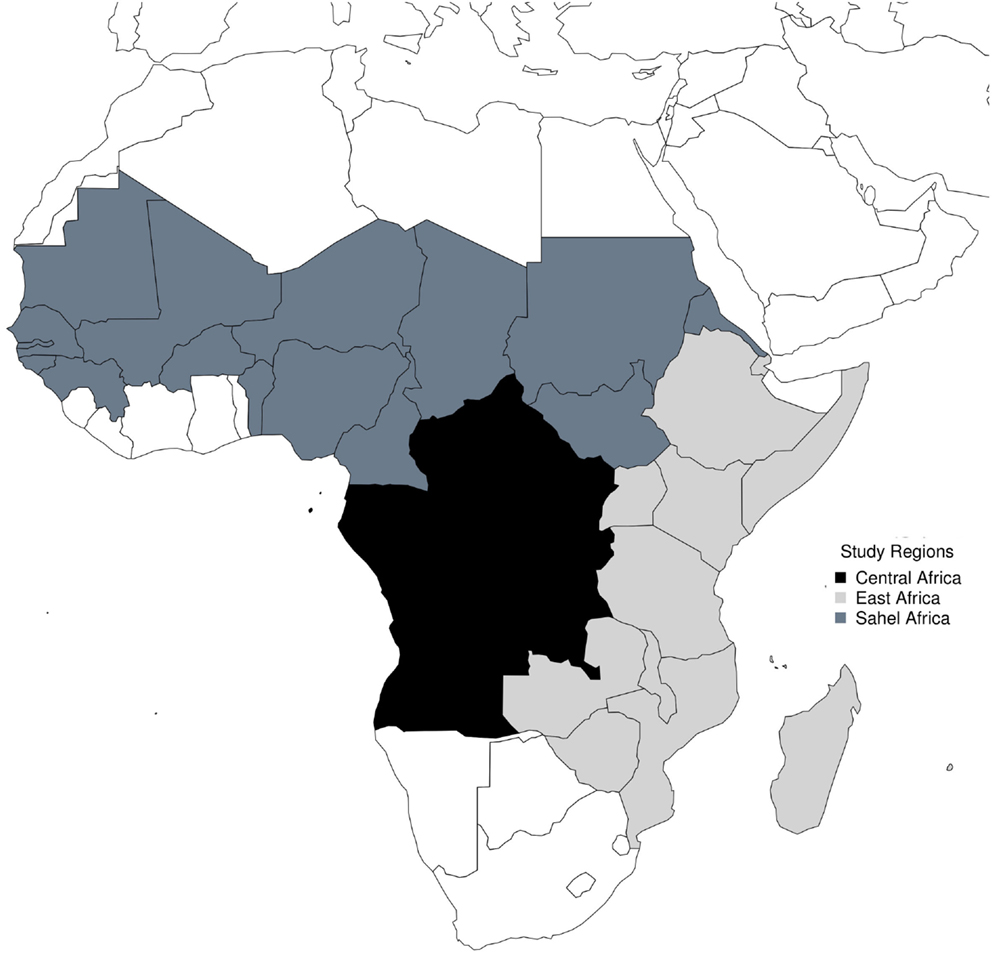 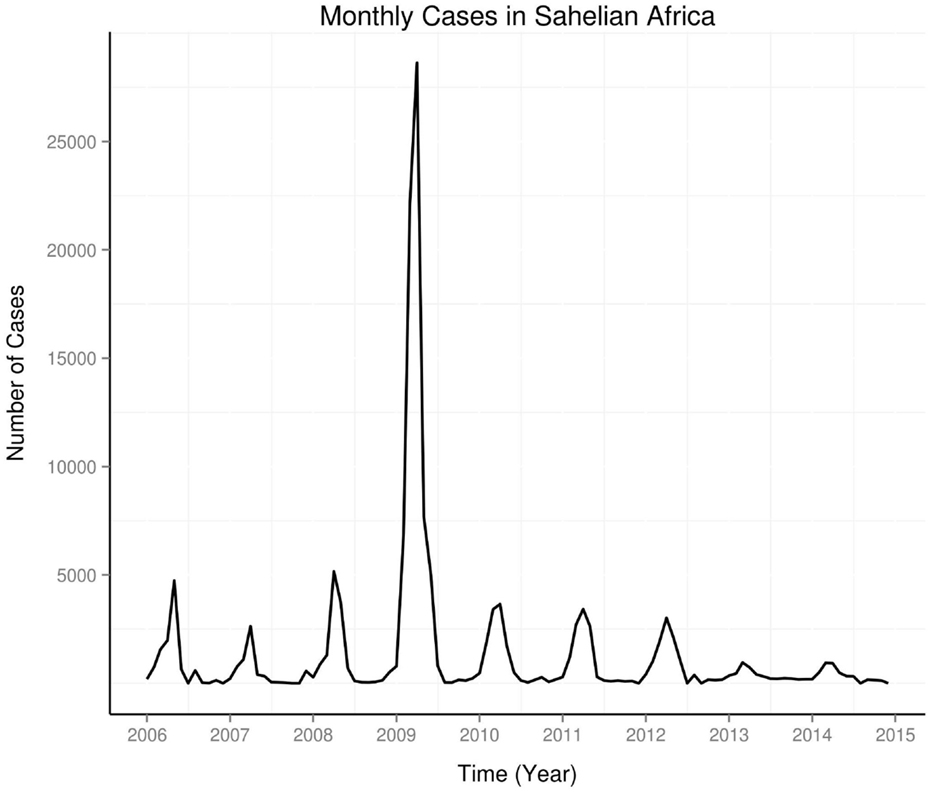 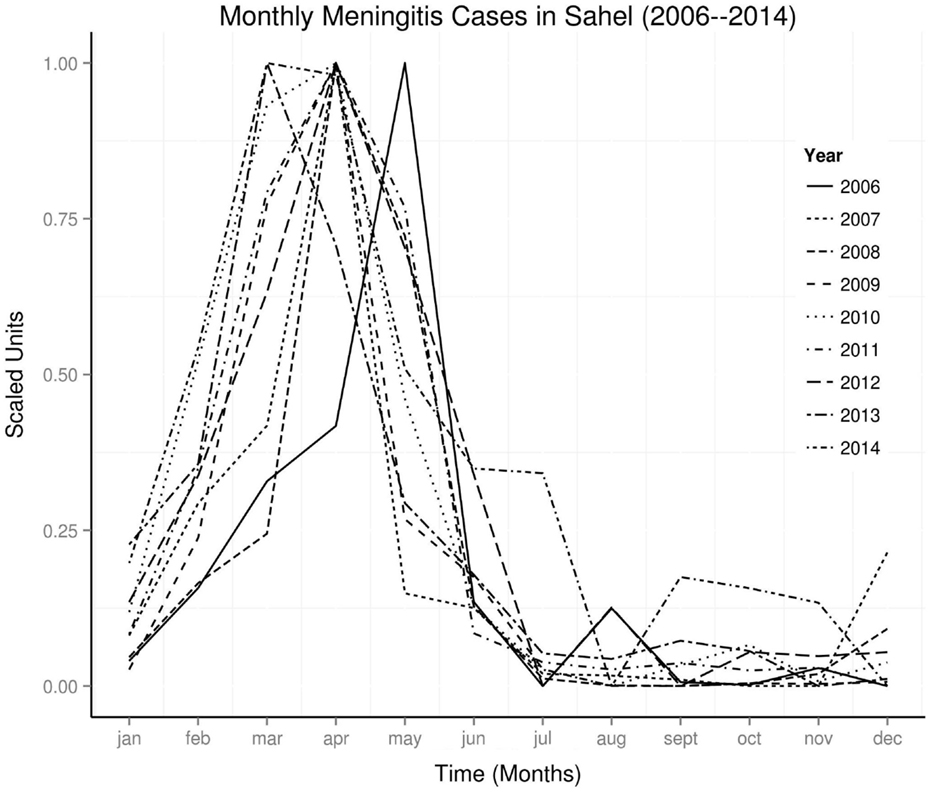 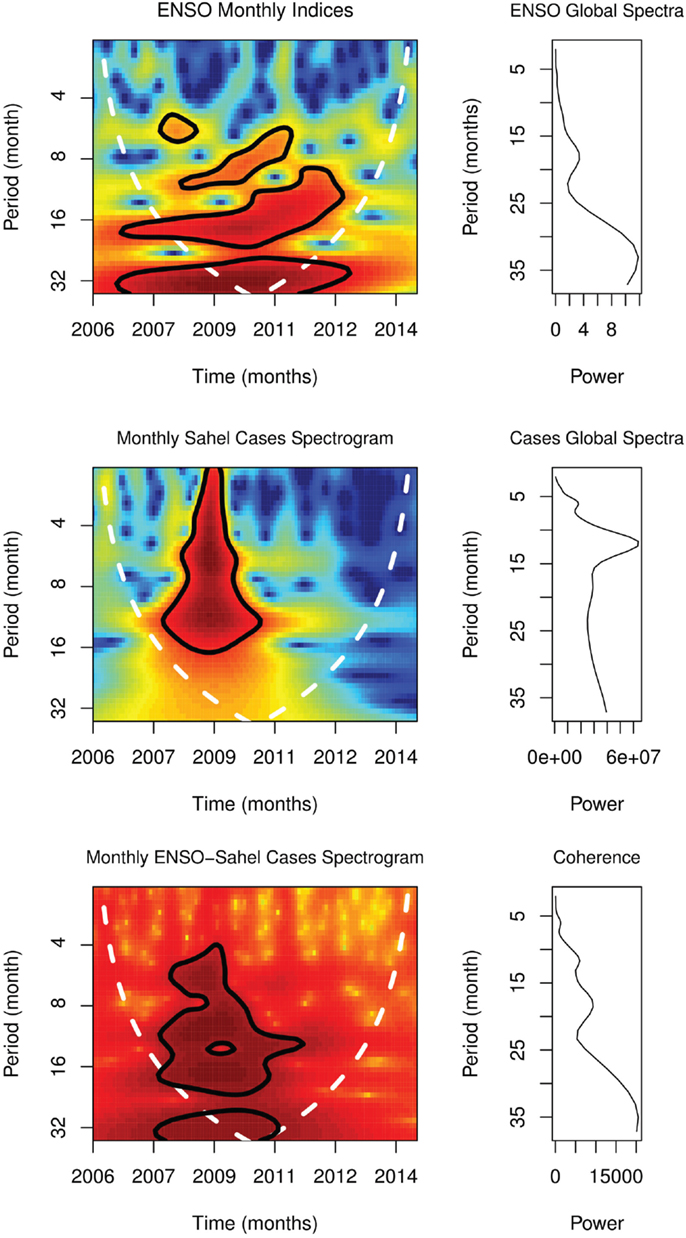 Figure 4. Spectra of occurrence in Sahel. 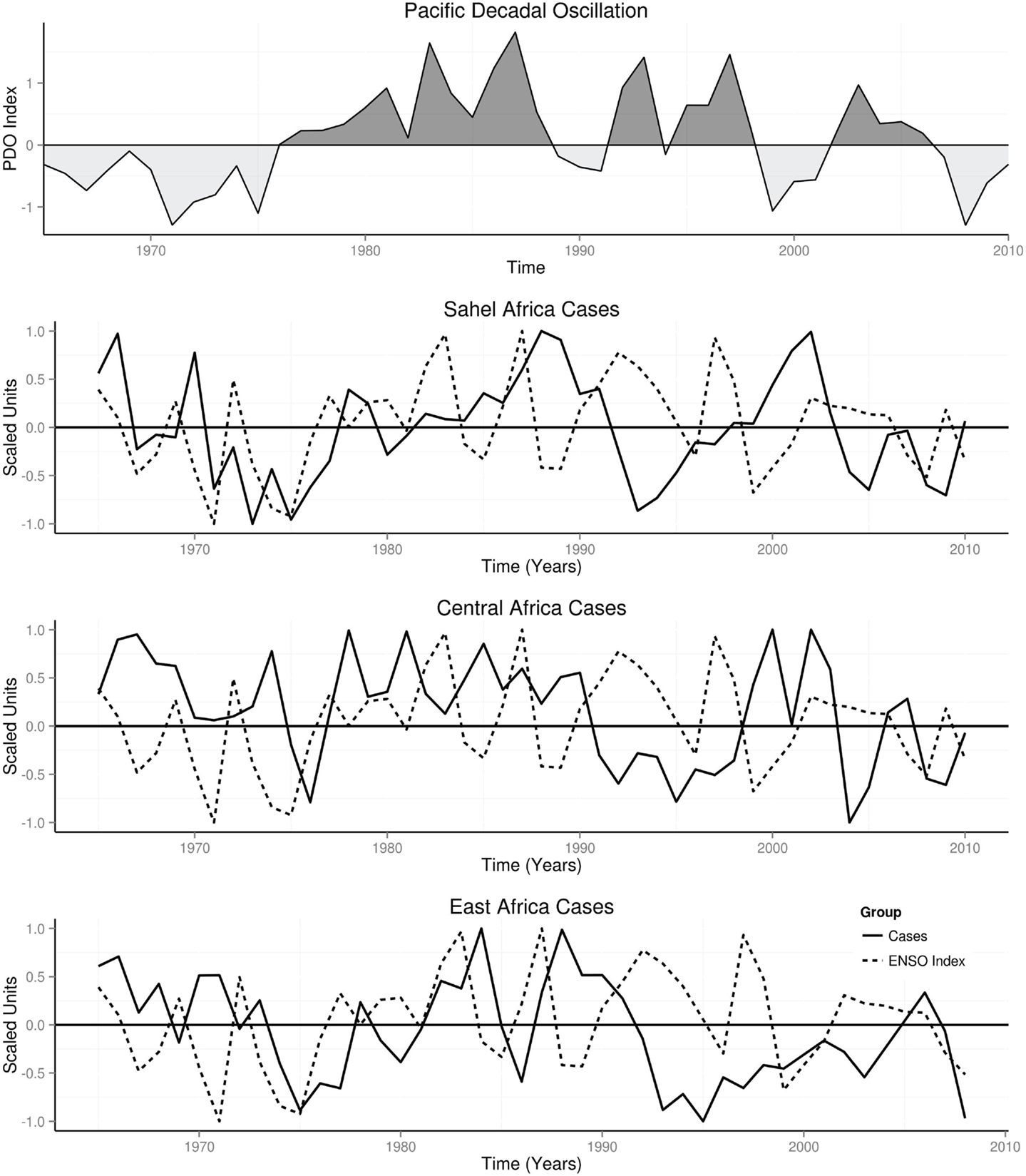 Figure 6. Spectral of PDO and ENSO. 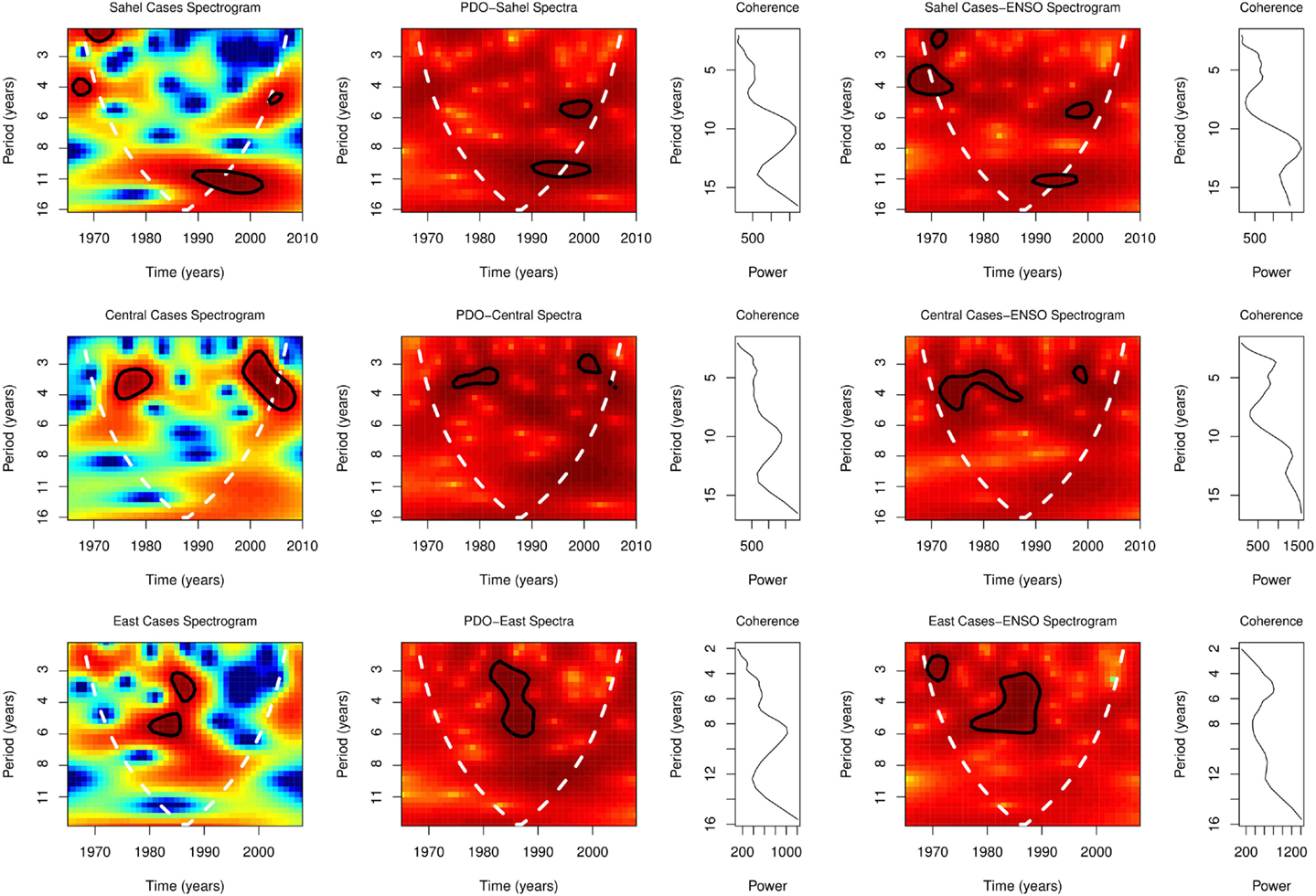 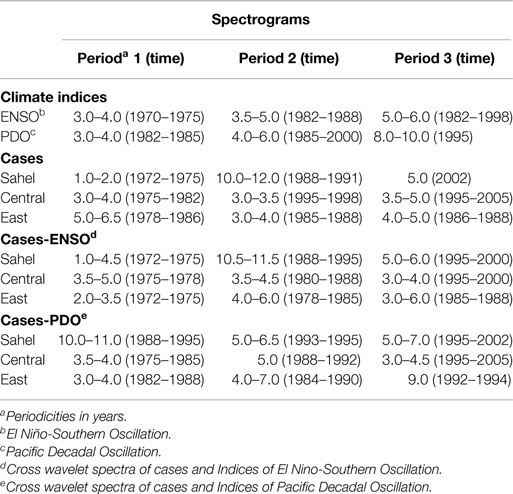 Time series plots of annual cases and ENSO indices in Sahel, Central, and East Africa showed periodic changes, but the time series of cases are phase shifted to the right (Figure 5). Global spectra of ENSO from 1965 to 2010 showed peaks at 4.0, 5.0, and 12.0 years (Figure 6), while its spectrogram showed significant time-varying periodicities of 3–6 years, p < 0.0001.

Precipitation Changes in the Sahel 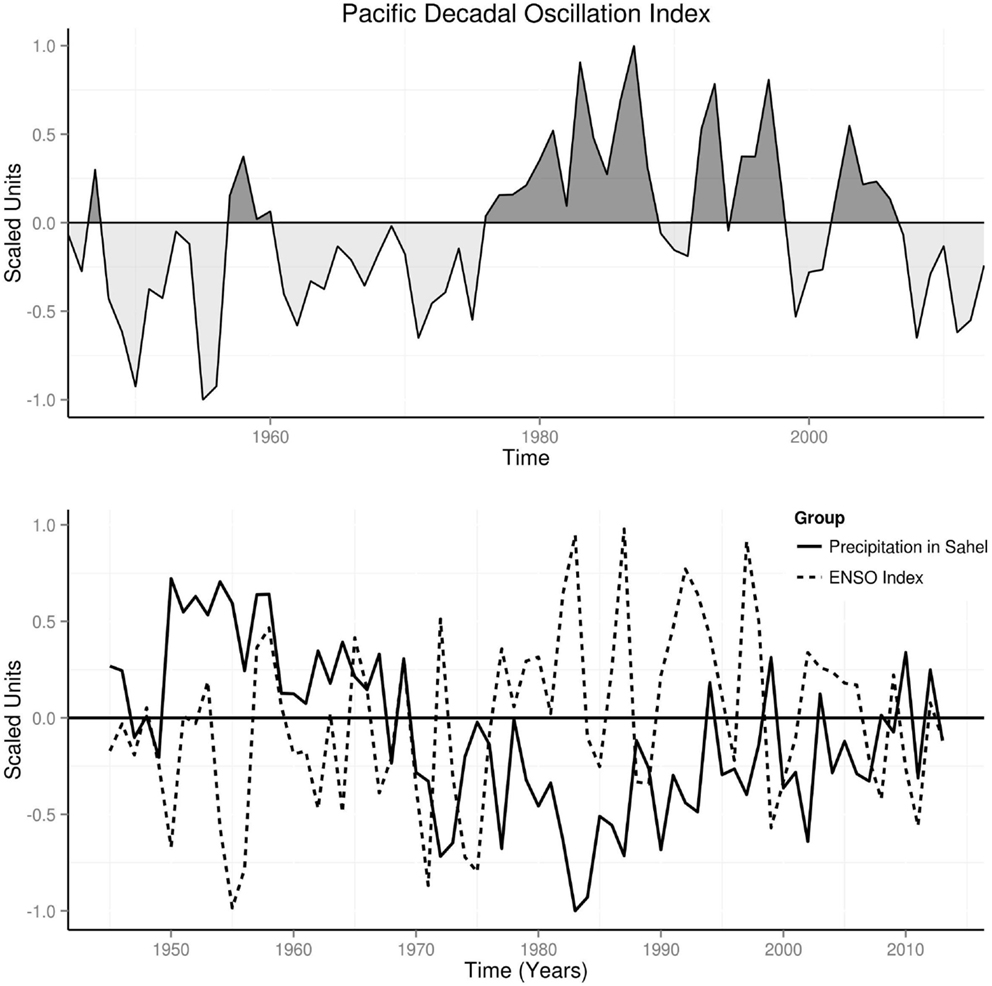 Figure 8. Annual time series of precipitation in the Sahel, PDO, and ENSO.

Figure 9. Spectral of precipitation in the Sahel and ENSO.

The spectra of monthly time-series in Sahel, which show similar time-varying periodicities of 6 and 12 months with the spectra of ENSO, indicate that both variables share rhythms at similar timescales (Figure 4). Strong spectra coherence indicates that the two rhythms are strongly correlated (Figure 4). The ENSO Granger causality, which shows that changes in ENSO precede occurrence, indicate that the relationship of ENSO and occurrence is not bidirectional. Since variability of ENSO is linked to changes in precipitation (10), coherence of seasonal changes in occurrence and ENSO indicate that precipitation changes induced by ENSO are the underlying determinant of the epidemics.

Wavelet analysis, which transforms time series to time-frequency domain, has shown the time-varying nature of PDO (37). During the period of this study, from 1965 to 2010, the dominant periodicities of 5 and 9 years for PDO, shows its relatively long period of variability (Figure 6). Spectrogram, however, shows significant time-varying periodicities of 3–11 years (Figure 6). Significant spectral coherence of PDO and occurrence, periodicities of 3–11 years, indicates that climate regime and occurrence are coupled (Figure 7).

ENSO and Epidemics of Meningococcal Meningitis

Periodicity of the ENSO, like the PDO, is time-varying. Periodicity of ENSO, which was 3–4 years from 1872 to 1910, was 5–7 years from 1911 to 1960, but 5 years from 1970 to 1992 (38). The periodicities of 4–13 years for the ENSO, which is in the same range as that for occurrence 4–12 years, indicate similar rhythms of both variables (Figure 6). In Burkina Faso, Chad, Mali, and Sudan, inter-epidemic periodicity varies from 8 to 12 years from the 1940s to mid-1990s (1). Spectral coherence of ENSO and occurrence indicates that the observed varying inter-epidemic duration is attributable to changes in the periodicities of ENSO (Figure 7). Since interannual changes in precipitation covary with ENSO activity (39), changes in precipitation are the underlying mechanism of the spectra coherence of ENSO and occurrence.

Historical data showed that pandemics or major epidemics of meningococcal meningitis occurred in 1905 in Nigeria (26), in 1918 and 1929–1931 in the USA (27, 28), in 1915–1917 and 1931 in England (29), and in 1941–1942 in Africa, Europe, and North America (30). All these epidemics occurred following strong or moderately strong El Niños, which have been linked to health outcomes (24). Thus, historical and present data indicate strong correlation of ENSO activity and epidemics of meningococcal meningitis.

Meningococci are commensals of the nasopharynx, but minority of strains cause invasive infection (40). The risk factors for meningococcal meningitis include virulence of the organism, carriage (41), host immunity, overcrowding, and climate (1). Serogroups that cause invasive disease, however, differ in different regions of the world, and change over time (5). Low absolute humidity and dust enhance invasive disease by damaging the mucosal barrier directly or by inhibiting mucosal immune defenses, while travel and migration facilitate the transmission of virulent strains (1). Concurrent upper respiratory tract infections also contribute to invasive disease. While there are several risk factors, serogroups, carriage, and overcrowding do not always predict epidemics (41). Thus, multiple risk factors are necessary for the epidemics to occur.

Since virulence of organism, innate immunity, carriage, overcrowding, and other risk factors were not controlled for in this study, the peaks of occurrence in the time series cannot be attributed to climate alone. Immunization, for example, is expected to contribute to reduction of number of potential cases. Although there are many potential confounding factors, the WHO has documented that these confounding factors are unlikely to consistently covary with ENSO in long time-series (24). Thus, the correlations found in this study are unlikely to be biased by confounding factors.

Wavelet methods have been used to correlate ENSO activity with periodic epidemics of malaria in West Africa (48), cholera in Bangladesh (49) and West Africa (50), and dengue in Puerto Rico, Mexico, and Thailand (51). In conclusion, this study shows that occurrence of meningococcal meningitis shows seasonal, interannual, and interdecadal variations which covary with climate regimes and ENSO activity. Although forecast models (52) have not consistently predicted occurrence and strength of El Niños, they should become part of public health strategies to anticipate periods of occurrence of high intensities El Niños when major epidemics are likely to occur.

42. Dimitrov BD. Cyclicity in incidence variations of meningococcal infections in Bulgaria is similar to that of solar activity. Cent Eur J Public Health (2000) 8(2):114–6.

Copyright: © 2015 Oluwole. This is an open-access article distributed under the terms of the Creative Commons Attribution License (CC BY). The use, distribution or reproduction in other forums is permitted, provided the original author(s) or licensor are credited and that the original publication in this journal is cited, in accordance with accepted academic practice. No use, distribution or reproduction is permitted which does not comply with these terms.