Design: This was a series of cross-sectional surveys from 2004 to 2012 in Guangxi, supported by the Chinese National HIVDR Surveillance and Monitoring Network Working Group.

Conclusion: This study first demonstrated that HIV patients infected through various transmission routes can achieve an excellent treatment outcome in hospitals at or above the county level for free first-line ART in Guangxi. It is an important of ART education and adherence to intervention for achieving better treatment outcomes.

Highly active antiretroviral therapy (HAART) has led to a dramatic increase in sustained suppression of human immunodeficiency virus (HIV) replication. Since HAART was developed in the early 1990s, there has been a rapid improvement in prognosis of patients infected with HIV and reduction in AIDS-related mortality (1, 2). In resource-rich countries, because of the use of optimal regimens and a complete monitoring system for virologic failure and drug resistance, levels of drug resistance decreased over time (3, 4). As a result of the scale-up of the “3 by 5” project in low-income and middle-income countries, an increasing number of patients received antiretroviral treatment (ART) from 2003. However, the emergence of HIV drug resistance (HIVDR) was a big challenge to the rapid development of HAART (5, 6).

The China’s National Free Antiretroviral Treatment Program (NFATP) began in 2002 and rapidly scaled-up. In 2008, China’s NFATP changed the threshold of initiating free ART access to more patients (7). By the end of 2013, among the 436,817 people living with HIV in China, the total number receiving free ART had increased to 278,080 (8). In China, ART has significantly reduced mortality among HIV patients (9–11) and HIV transmission among serodiscordant couples in the Chinese national observational cohort study (12). However, meta-analysis study results showed that the pooled prevalence of HIVDR was 11.1% during 0–12 months and increased to 22.92% at 61–72 months in Chinese HIV-Infected Patients Receiving First-Line HAART (13). Guangxi Zhuang Autonomous Region located on the southern coast of the China, and neighboring Vietnam in the South and Yunnan Province in the west, is the major drug trafficking route linking Guangxi with Yunnan and Vietnam. The reported cases of HIV/AIDS in Guangxi accounted for 10% of the reported numbers in China. The first HIV infection among local IDUs was observed in 1996 in Guangxi, and HIV infection through drug injection accounted for 69% of the cumulative reported cases of HIV in Guangxi in 2003 (14). However, in 2013, 93% of reported HIV cases in Guangxi were infected through heterosexual intercourse (15). Guangxi Zhuang Autonomous Region has the highest number of reported HIV cases in China (15). Because of the capacity in county hospital-based care and management for free ART in Guangxi, the aim of this study was to evaluate virologic failure and drug resistance and associated factors among HIV-infected patients receiving first-line ART.

We conducted a series of cross-sectional surveys of HIVDR in adult patients at regional representative ART clinics in Guangxi from 2004 to 2012. This protocol of Chinese National HIVDR Surveillance was adopted from the WHO recommended cross-sectional survey on acquired HIVDR in adult patients receiving ART, which has been described elsewhere (16–19). First-line ART regimens before 2008 consisted of [azidothymidine (AZT) or stavudine (D4T)] + [didanosine (DDI) or lamivudine (3TC)] + [nevirapine (NVP) or efavirenz (EFV)]. The second edition of the National Free ART Guideline in 2008 was revised to consist of [tenofovir (TDF) or azidothymidine (AZT)] + lamivudine (3TC) + [efavirenz (EFV) or nevirapine (NVP)] (7). The NFATP criterion for treatment was (1) CD4 cell count <200/mm3 before 2008, and <350/mm3 since 2008, (2) total lymphocyte count <1200/mm3 before 2008, and/or (3) WHO stage III or IV disease (7, 20). The study eligibility criteria were HIV patients, 18 years or older, having received first-line ART, willingness and consent to participate in the study. Patients who received second-line ART were excluded.

The data were collected with an interviewer-administered questionnaire. Each participant provided informed consent before participation in the study. Each subject was assigned a confidential identification number to label questionnaires and blood specimens. The questionnaire was administered by trained local staff in a private room. The questionnaire information included demographic data, HAART treatment, and self-reported adherence measures. Demographic variables included sex, ethnicity, education level, occupation, marital status, and HIV transmission route. HAART treatment variables included initial regimen, the duration of HAART, and end of HAART regimen. Self-reported adherence variables included missed ART doses in the past month. The institutional review board (IRB) of the National Center on HIV/STD Control and Prevention (NCAIDS), China CDC approved this study. 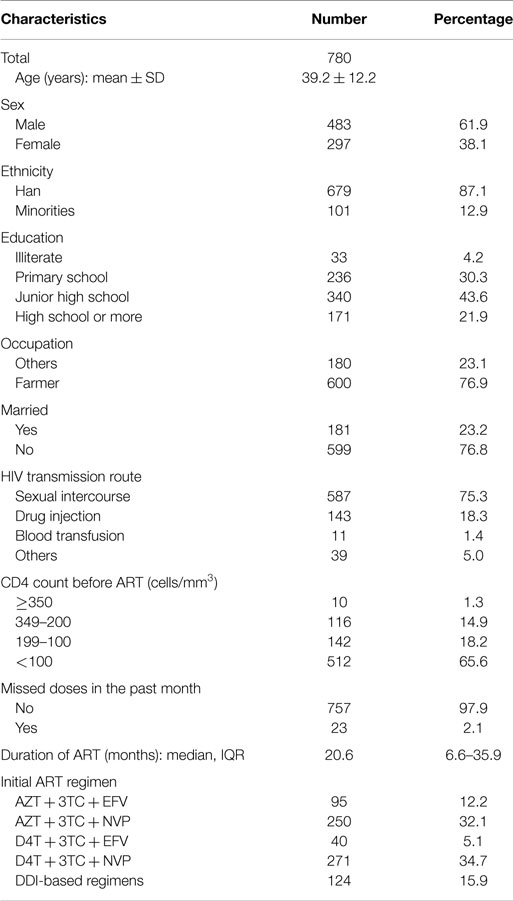 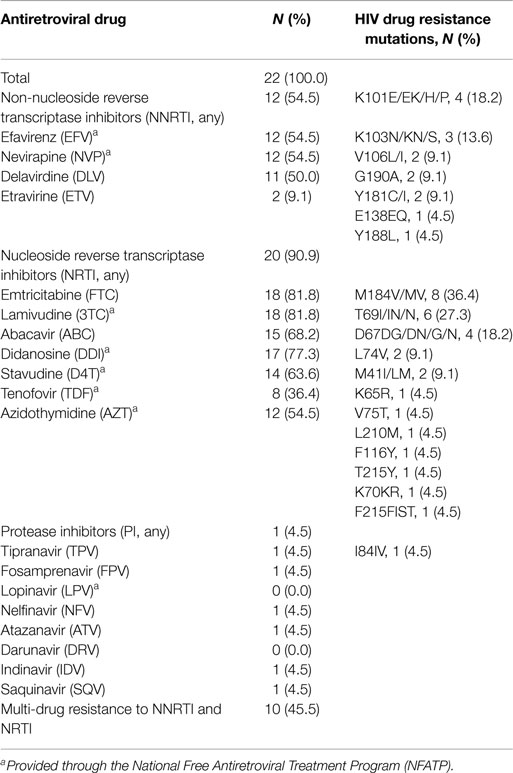 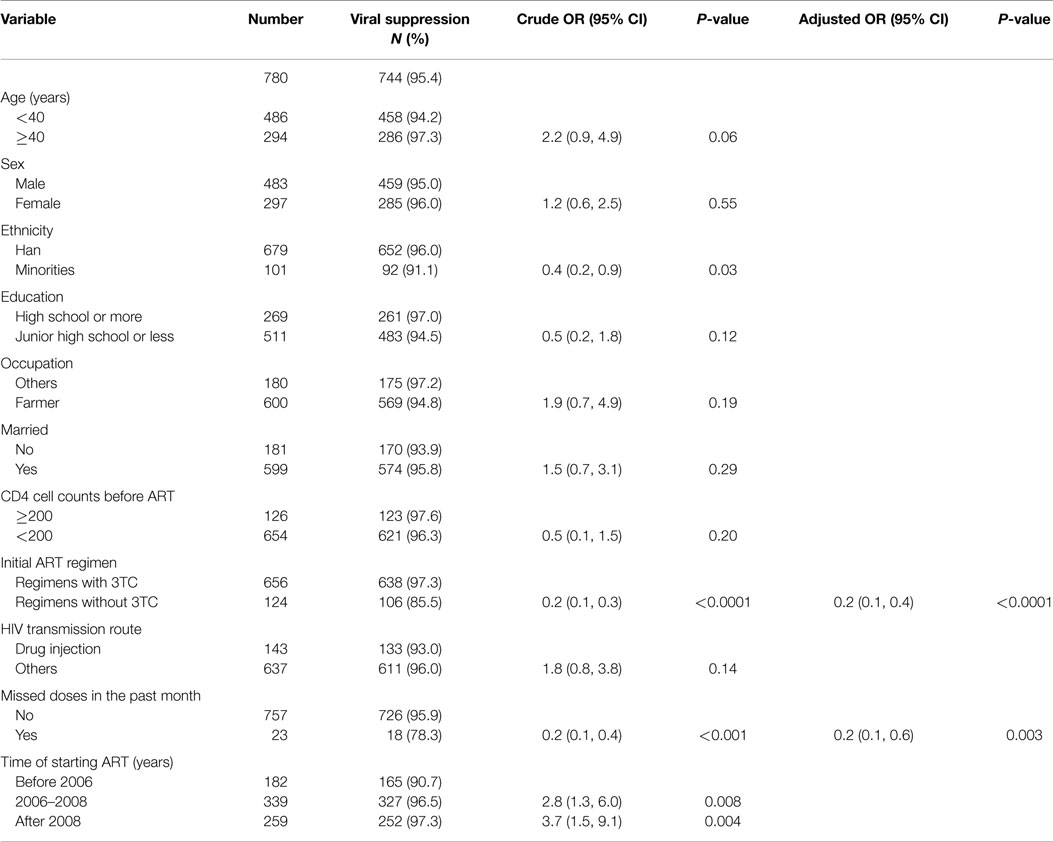 In this study, we found significant low virologic failure (4.6%) and drug resistance (2.8%) among HIV-infected patients receiving first-line ART with the median duration of treatment of about 20-month in Guangxi, China. Also, virologic suppression increased over time. A recent systematic review and meta-analysis showed that the pooled prevalence of HIVDR was 11.1% (95% CI, 7.49–16.14%), which increased to 22.92% at 61–72 months (95% CI, 9.45–45.86%) among Chinese HIV-infected patients receiving first-line ART in China (13). Defining 1000 copies/ml as the same threshold of virologic failure, a systematic review conducted in Sub-Saharan Africa concluded that the rate of virologic suppression were 76 and 67% with the median duration of ART at 12- and 24-month, respectively (24). Based on another systematic review conducted in resource-limited settings in 2013, HIVDR at 12–23 months was 11.1% (25). With prolonged treatment, the rate of virologic failure and drug resistance increased over time (26, 27). In the 2012 WHO drug resistance surveillance guideline, viral load suppression after 12 months of ART can be graded as poor (<70%), fair (70–85%), or excellent (>85%) (28). The prevalence of virologic failure and drug resistance in our study is comparable to the virologic treatment responses seen in other developed and industrialized countries (4). What is more, of the 143 patients who were infected by drug injection, only 10 (7.0%) experienced virologic failure, lower than other provinces in China and this result consist with previous study in China (19). Compared to those results, we can conclude that successful outcomes of ART can be achieved in resource-limited settings.

There are several reasons to explain low virologic failure and drug resistance among HIV-infected patients receiving first-line ART in Guangxi. First, there are three levels of AIDS hospitals providing ART for HIV patients, including provincial, prefecture, and county hospitals. One provincial hospital provides technical supports and training to each prefecture hospital, which then provides technical assistance to each county hospital. Second, although HIV patients receive treatment in hospitals at or above the county level, health staff at village clinics or township hospitals are responsible for community care and outreach, such as home visits or telephone calls for reminding of ART adherence, and making an appointment if patients did not see doctors at AIDS hospitals for ART management every 3-month follow-up. Third, all doctors and health staff for ART and care management receive comprehensive HIV/AIDS medical training. Fourth, initial ART regimen with 3TC can increase virologic suppression. Our previous studies found HIV patients who received ART at village clinics, township hospitals, or local CDCs had poor virologic outcomes, whereas treatment counseling and instruction through telephone and 3TC-based regiments were significantly associated with HIV RNA suppression (16, 29, 30).

Despite successful HIV virologic suppression in this study, patients with missed doses in the past month and initial ART regiments without 3TC were found to be at increased risk for poor virologic response. This indicates that measures should be continuously taken to train local medical staff, and educate patients and enhance adherence monitoring. Due to the poor outcome of patients that received DDI-based treatment, the NFATP’s first-line antiretroviral regimens have been changed to exclude the use of didanosine (DDI) and to include the use of lamivudine (3TC) for all new patients beginning treatment since 2008 (7).

The prevalence of HIVDR among patients who experienced virologic failure was 62.9% (22/35). Of 22 patients with HIVDR, the proportions of NNRTI mutations, NRTI mutations, and PI mutations were 54.5, 90.0, and 4.5%, respectively. In addition, 10 (45.5%) were identified to be resistant to multi-drugs. M184I/V was the most common NRTI mutations and other studies in China showed similar results (16, 29). One PI mutation was identified in this study, because that PI was not scaled-up at that period.

The limitations can be summed up as follows. First, these results may not represent all patients in Guangxi because of the exclusion criteria and limited geographic distribution of the surveillance sites. Also, the surveys did not include all patients who have met the inclusion criteria in Guangxi, so when we draw the conclusion we should be cautious. Second, considering diverse HIV epidemic conditions in different districts in Guangxi, the difference among those districts should be considered.

In summary, this study in Guangxi demonstrates that HIV-infected patients receiving first-line treatment achieve an excellent treatment outcome and we can summarize those factors associated with virologic suppression as increasing the proper use of 3TC-based regimens and strengthening the importance of adhering to treatment.

In this study, we found significant low virologic failure and drug resistance among HIV-infected patients receiving first-line ART with the median duration of treatment of about 20-month in Guangxi, China. Our study demonstrated that HIV-infected patients receiving first-line treatment can achieve an excellent treatment outcome in hospitals at or above the county level for free ART in Guangxi, and we can conclude that the increasing the proper use of 3TC-based regimens and the strengthening the importance of adhering to treatment are associated with virologic suppression.

17. Who Global Strategy for the Surveillance and Monitoring of HIV Drug Resistance (2012). Available from: http://www.who.int/hiv/pub/drugresistance/drug_resistance_strategy/en/

28. Protocol for Population-Based Monitoring of HIVDR Emerging During Treatment And Related Program Factors at Sentinel ART Clinics (2012). Available from: http://apps.who.int/iris/bitstream/10665/75205/1/WHO_HIV_2012.15_eng.pdf

Copyright: © 2015 Liang, Shen, Yan, Liang, Tang, Liu, Kan, Liao, Leng, Ruan, Xing and Shao. This is an open-access article distributed under the terms of the Creative Commons Attribution License (CC BY). The use, distribution or reproduction in other forums is permitted, provided the original author(s) or licensor are credited and that the original publication in this journal is cited, in accordance with accepted academic practice. No use, distribution or reproduction is permitted which does not comply with these terms.

†Shujia Liang, Zhiyong Shen and Jing Yan have contributed equally to this work.