It’s Not Just a Yes or No Answer: Expressions of Local Health Department Accreditation

The identification and exploration of moderators of health department accreditation remain limited by current dichotomous conceptualizations of pursuit.

Conclusion: More granular characterizations of accreditation pursuit may improve understanding of influential factors. This measurement framework should be validated in studies of LHDs in other states.

U.S. health department pursuit of voluntary accreditation is a natural experiment allowing the observation, identification, and definition of influential environmental, organizational, policy, and structural factors. The national research agenda set by the Public Health Accreditation Board’s (PHAB) Research Advisory Council called for improved measures to help understand this pursuit and progress (1). While local health department (LHD) accreditation is recognized as a QI initiative that could help standardize the delivery of 10 essential public health services in each community (2–4), it is a fairly new innovation, launched nationally in 2011.

The study of accreditation has quickly advanced as much as this evolving implementation environment will allow. It has become clear that financial and legal incentives facilitate accreditation, as do population size, degree of top executive, governance structure, state health department accreditation pursuit, and the existence of formal QI initiatives (5–8). The influence of prerequisite completion continues to be investigated (5, 9, 10), and frameworks guiding the study of accreditation are at formative stage; two have used the PHAB framework for accreditation to help conceptualize progress (5, 11).

Local health department accreditation adoption is likely more nuanced than being in a state of complete pursuit or non-pursuit and might be better characterized as periods of starting and stopping, with perhaps conflicting decisions about whether to continue pursuit. The influence of factors found to associate with accreditation pursuit and progress may be more pronounced when adoption is conceptualized in more than dichotomous terms such as “yes, we are pursuing” or “no, we are not pursuing.”

There are no regulations or laws in Indiana with regard to accreditation, though there is a statewide Indiana Accreditation Partnership convened by the Indiana Public Health Association (IPHA) and including governmental, non-governmental, and academic partners focused on advancing accreditation. To date, neither the Indiana State Department of Health nor any Indiana LHD has achieved PHAB accreditation.

This study is a cross-sectional observational study to classify LHD expressions of accreditation pursuit in Indiana and to test associations with selected covariates. An online 35-item survey with closed and open-ended questions was conducted by the IPHA and sent to all 93 LHD directors. The survey period was from November 2014 to March 2015.

Accreditation progress was categorized using four of the seven PHAB steps to the accreditation process: pre-application, application, documentation, and site visit (15). The PHAB steps are essentially categories of organizational behaviors related to accreditation. As none of the Indiana health departments achieved accreditation to date, we used only those steps that were relevant to the sample. Response options for each subactivity related to pre-application included (a) not completed, (b) is currently preparing to initiate, (c) have initiated, and (d) are completed. Prerequisites of community health assessment, community health improvement plan, and strategic plan were also measured by level of completion as (a) current, (b) in midst of completion, (c) initiating next year, and (d) “does not have and will not complete in the near future.” Prerequisites were understood to be part of ongoing cyclical planning processes.

Open-ended questions were used to gather explanatory rationale for decisions to pursue accreditation, or perceptions of factors influencing accreditation decision making and pursuit. Qualitative data from these questions were coded thematically and analyzed by predominant theme. The study was deemed exempt by the Indiana University Institutional Review Board.

As shown in Table 1, 25 (59.5%) LHDs pursuing accreditation were beginning or in the midst of the pre-application stage, as they indicated that they were “preparing to initiate” or they “initiated” one or more of the activities in this step. None had initiated application activities, though it appears that four (9.5%) LHDs are almost to this point, as they reported preparing to initiate their PHAB statement of intent. Another two LHDs (4.8%) were at the site visit step. There were no statistically significant associations with progress by step and LHD characteristics. Reported activities at each accreditation step were also compared with health department characteristics of size and metropolitan designation. Here again, there were no statistically significant associations found.

Notably, several health departments reported no activity on several PHAB application steps and associated behaviors, despite reporting intent to pursue accreditation (see bold text in Table 1). Of this group, 15 (35.7%) reported no activity on any progress indicators. This observation led to the separation of LHDs pursuing accreditation into two groups: those 15 LHDs who indicated intent but reported no evidence of pursuit were categorized as “Intent Only.” The 27 (64.3%) LHDs who indicated accreditation intent and reported evidence of pursuit were categorized as “Active Pursuit.”

Examination of prerequisite completion provided another opportunity to assess whether “Intent Only” LHDs were at least pursuing prerequisites to accreditation, even though completion of these preparation activities had not been found to predict accreditation pursuit (see Table 2). 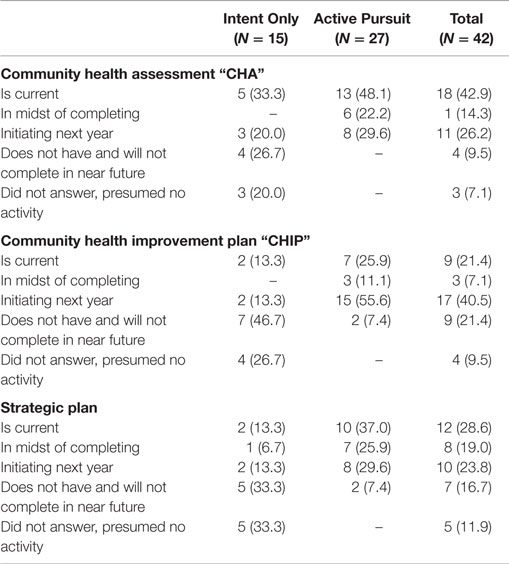 For those 15 LHDs who reported intent to pursue accreditation but did not report evidence of accreditation progress, almost half (46.7%, 7) reported not having a community health assessment and did not have plans to complete one in the near future. A majority (73.3%, 11) reported the same outcome for the community health improvement plan, and 10 (66.6%) indicated the same decision for a strategic plan.

While associations between formal QI programing and accreditation pursuit were not observed for the 42 LHDs reporting pursuit of accreditation, associations were observed when further distinguishing reported accreditation pursuit by progress evidence. For example, LHDs reporting intent to pursue accreditation and reporting measurable progress toward it (“Active Pursuit”) tended to report formal agency-wide QI programing (X2 = 8.9, p = 0.005; OR: 14.4, CI: 1.7–124.7). Conversely, the “Intent Only” LHDs were unlikely to report completing one or more of the prerequisites (X2 = 3.6, p = 0.05; OR: 0.281, CI: 0.07–1.1) and likely to report preference not to engage in the prerequisites of community assessment, community health improvement planning, and strategic planning (X2 = 6.1, p = 0.02; OR: 4.2, CI: 1.3–14.2).

Not and No Longer Pursuing Accreditation

Notably, the only association observed for LHDs who discontinued accreditation pursuit was that they tended not to agree or strongly agree that accreditation would impact future LHD performance (X2 = 5.3, p = 0.02; OR: 6.3, CI: 0.89–45.5). Of these 13 LHDs, 3 explained that their decision was based on the need to focus on other priorities, such as seeking status as a Federally Qualified Health Center, or that the “timing was not right” for accreditation. All three indicated that they might elect to pursue accreditation at some point in the future. Four of seven small health departments (<50,000 population) in this category indicated discontinuing accreditation pursuit because the application fees were too high, and five indicated that the time and effort required exceeded the capacity of their health department.

More was yielded when we attempted to classify accreditation pursuit in terms of documented progress using the PHAB framework and when creating a classification for discontinuation. What emerges is a picture of four types of health department pursuit of accreditation (Figure 1). 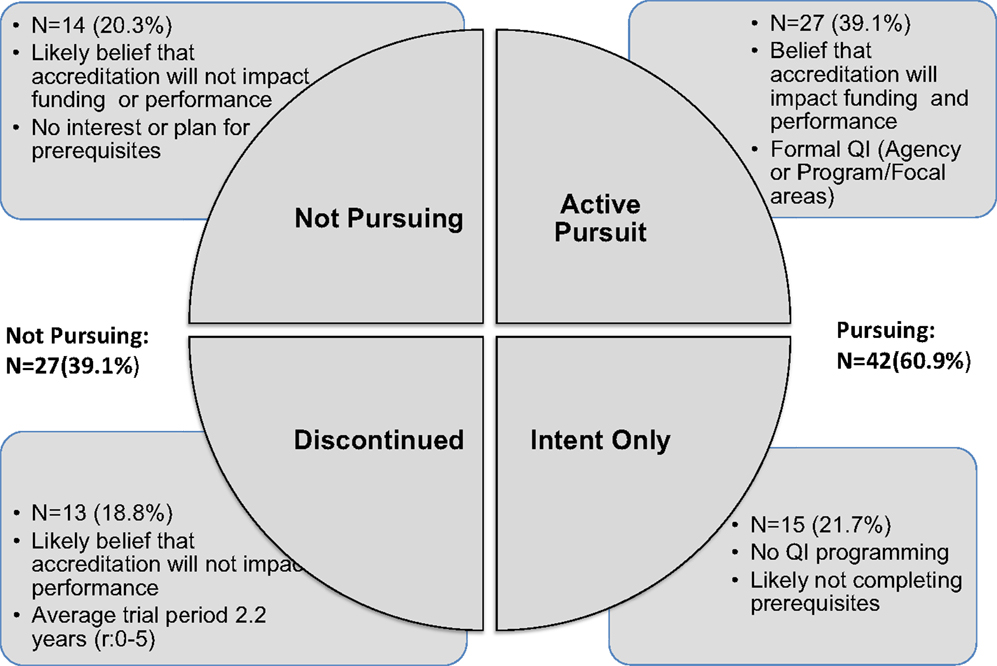 Using this framework to understand accreditation among a larger number of LHDs across the country would advance our current accreditation literature because there is now more than two categories of accreditation pursuit. Findings might also yield greater understanding of what accreditation pursuit looks like over time and what characteristics or elements might facilitate diagonal or lateral movement around adoption expressions as shown in Figure 1. As LHDs continue to adopt accreditation across the country, lateral movement from “Not Pursuing” to “Active Pursuit” would likely become the biggest leap requiring the largest intervention. Given limited accreditation resources, those engaged in facilitating accreditation pursuit would need to prioritize LHDs for technical assistance resources, but on what basis? Which characteristics would serve as key moderators for accreditation progress? Experience over time will likely show a decision by LHDs to drop out of the process altogether, suggesting a fifth category for the framework such as “Permanent Discontinuation.” But how permanent is this decision with leadership change at the LHD level? What is the impact of such a classification label on potential future organizational behavior?

Indiana, like many states, lacks structural facilitators of accreditation such as system-wide accreditation funding, legal tools (18), or public health law as in Ohio, where local health districts are required to achieve accreditation by 2020 (19). Therefore, understanding accreditation pursuit and progress differentiation will allow more meaningful understanding of indicators and their influence of this performance improvement initiative over time.

Study limitations included setting and study design. The limitation of setting involved the fact that Indiana has a preponderance of counties with populations of <50,000. Exploring the relevance of this framework across several states will further the understanding of the impact of population size as a potential covariate across potential expressions of accreditation intent and pursuit. The limitation of study design involved the use of only four of seven PHAB steps based on the current accreditation progress in Indiana. Studies in states with accredited health departments would help to validate the adoption framework emerging from this study. Finally, data were gathered through self-reported survey responses, and as such, there were no efforts to validate what was reported.

BM does not have anything to disclose for this study and manuscript. Corporate relationships are as follows: BM has received research funding from Roche Diagnostics and from GlaxoSmithKline for studies in cervical cancer policy. She is also affiliated with the Indiana University School of Medicine, the Kinsey Institute, and the Center for HPV Research. JK, KC, SL, and LM do not have anything to disclose.

4. Thielen L. Exploring Public Health Experience with Standards and Accreditation. Is It Time to Stop Talking about How Every Health Department Is Unique? Report Prepared for the Robert Wood Johnson Foundation (2000). Available from: http://www.cdc.gov/nceh/ehs/ephli/resources/exploring_public_health.pdf

Copyright: © 2016 Meyerson, King, Comer, Liu and Miller. This is an open-access article distributed under the terms of the Creative Commons Attribution License (CC BY). The use, distribution or reproduction in other forums is permitted, provided the original author(s) or licensor are credited and that the original publication in this journal is cited, in accordance with accepted academic practice. No use, distribution or reproduction is permitted which does not comply with these terms.