Over the past three decades, childhood obesity has increased worldwide, including Japan (1, 2). Children who are obese or overweight are more likely to be obese or overweight in adulthood (3). Further, childhood obesity can lead to a wide range of diseases, including hypertension (4), dyslipidemia (5), type 2 diabetes mellitus (6), sleep apnea (7), renal dysfunction (8), and depression (9). As dietary and exercise habits are difficult to change in adulthood, early interventions for childhood obesity are important to prevent obesity later in life (1, 10).

Determinants of childhood obesity vary from genetic to non-genetic factors (10). Non-genetic factors include bottle feeding (11), a sedentary lifestyle and longer periods of watching television (12, 13), and poor eating habits, such as larger intakes of sugar-sweetened beverages (14) or fast food (15). Recent studies suggest that these non-genetic factors related to childhood obesity might be determined by family factors, such as maternal employment or longer maternal working hours in conjunction with a rise in dual-income families (16–20). Moreover, both maternal and paternal working styles, such as the type of work schedule, have been investigated as determinants of child obesity (21–23).

This study is a part of the Tokyo Work–Family Interface Study (TWIN) II, a large cohort study that commenced in 2011. We invited participants of TWIN I (30), the study we initially started, to participate in the TWIN II survey (N = 321 families). Additionally, we also approached all day care centers (N = 22) in another ward, Meguro city, with the permission of Meguro’s day care division. We sent our research plan and consent forms to the principals of all day care centers. All principals agreed to participate and sent the research plan and consent forms to parents. After checking the signed consent forms from those parents who agreed to participate, we directly sent out questionnaires to participating parents’ addresses (N = 357 families). Therefore, questionnaires were distributed to all parents (N = 678 families) in 2011, and 413 families responded to the questionnaire (response rate: 60.9%). Further, follow-up questionnaires were distributed in 2012, and 229 responses were received (follow-up rate: 55.4%). Of these, valid responses on workaholism and both parental and child BMI were received from 125 families (54.6%).

Workaholism was assessed in the baseline questionnaire during the fiscal year (FY) of 2011. The questionnaire was based on the Japanese version of the Dutch Workaholism Scale, which showed good reliability and validity (31). The scale consists of two subscales: working excessively and working compulsively. Both subscales comprised five items with a 4-point Likert scale (1 = “totally disagree” and 4 = “totally agree”).

In addition, work demands and work control were assessed using the Brief Job Stress Questionnaire (32). Both scales were composed of three items (e.g., for work demand, “I am asked to do an excessive amount of work” and for work control, “I have influence over the pace of my work”), with a 4-point Likert scale (1 = “disagree” and 4 = “agree”). The sum of all item responses was used for analysis.

Time spent with children was assessed using the following question: “How long do you spend with your child per week?”; responses included units of hours per week. The response was used as a continuous variable. Parental and child weights and heights were assessed using a self-reported questionnaire (i.e., self-reported for parental weight and height and parent-reported for child weight and height). Previous studies among Japanese have proven the high accuracy of self-reported child weights and heights (33, 34), as well as that for adults (35). BMI (kilogram/square meter) was calculated as weight (kilogram) over height squared (square meter). Child BMI was adjusted for age and sex, and BMI z-scores were calculated based on World Health Organization standards (36). Parental BMI was collected from the baseline questionnaire in FY 2011, and child BMI was collected both at baseline in FY 2011 and at follow-up in FY 2012. Other covariates, including parental characteristics, such as age, annual household income, occupation, and status of maternity or paternity leave, were collected for both mothers and fathers, and child’s sex and age were also assessed at baseline in FY 2011.

First, to confirm whether workaholism and work demands and control reflected parental occupation, the mean scores of each work-related scale were compared between occupations of mothers and fathers using analysis of variance. Second, structural equation modeling was used to determine the association between maternal and paternal workaholism in 2011 and child BMI in 2012, considering the mediating effects of parental BMI, time spent with children, and child BMI in 2011. Further, we incorporated the association of both work demands and control related to workaholism with time spent with children in the model. Stata SE 13 (StataCorp, College Station, TX, USA) was used for the analysis.

Table 1 shows the characteristics of the sample. Mean paternal and maternal ages were 39.6 (SD: 6.3) and 38.0 (SD: 4.5) years, respectively. Mean BMI for fathers was 23.2 (SD: 3.0) and 20.1 (SD: 2.1) for mothers, which is consistent with the average BMI for this age group in Japan (37). Annual household income was skewed to the right, i.e., the sample was relatively wealthy, with more than half reporting an annual income of more than 10 million yen (equivalent to USD 80,000 as of 2015), as reported by fathers. Interestingly, mothers reported a lower annual household income than fathers. The type of paternal occupation was distributed almost equally for non-manual (52.8%) and manual (40.8%) jobs, and only one participant was taking paternity leave at the time of the survey. For mothers, manual occupations were in the majority (55.2%) and non-manual occupations accounted for 36.8%, while 7.2% of participants were taking maternity leave at the time of the survey. Regarding children’s characteristics, boys were dominant at 61.6%, and child ages ranged between 2 and 95 months. Mean z-scores of child BMI for both FY 2011 and 2012 were 0.002 and −0.095, respectively, suggesting that participating children were not skewed to either overweight or underweight. 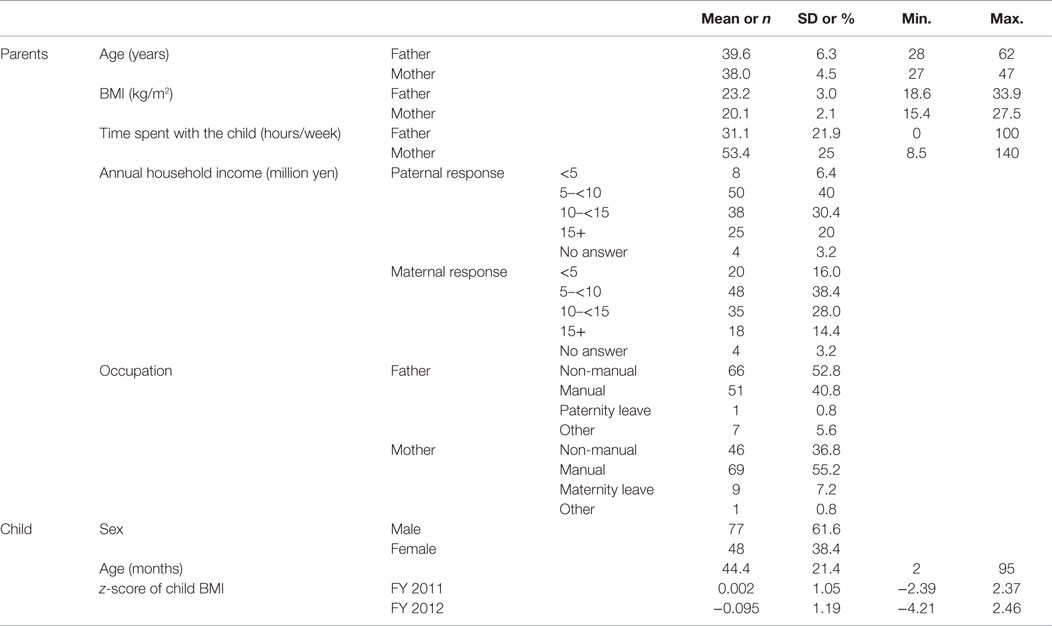 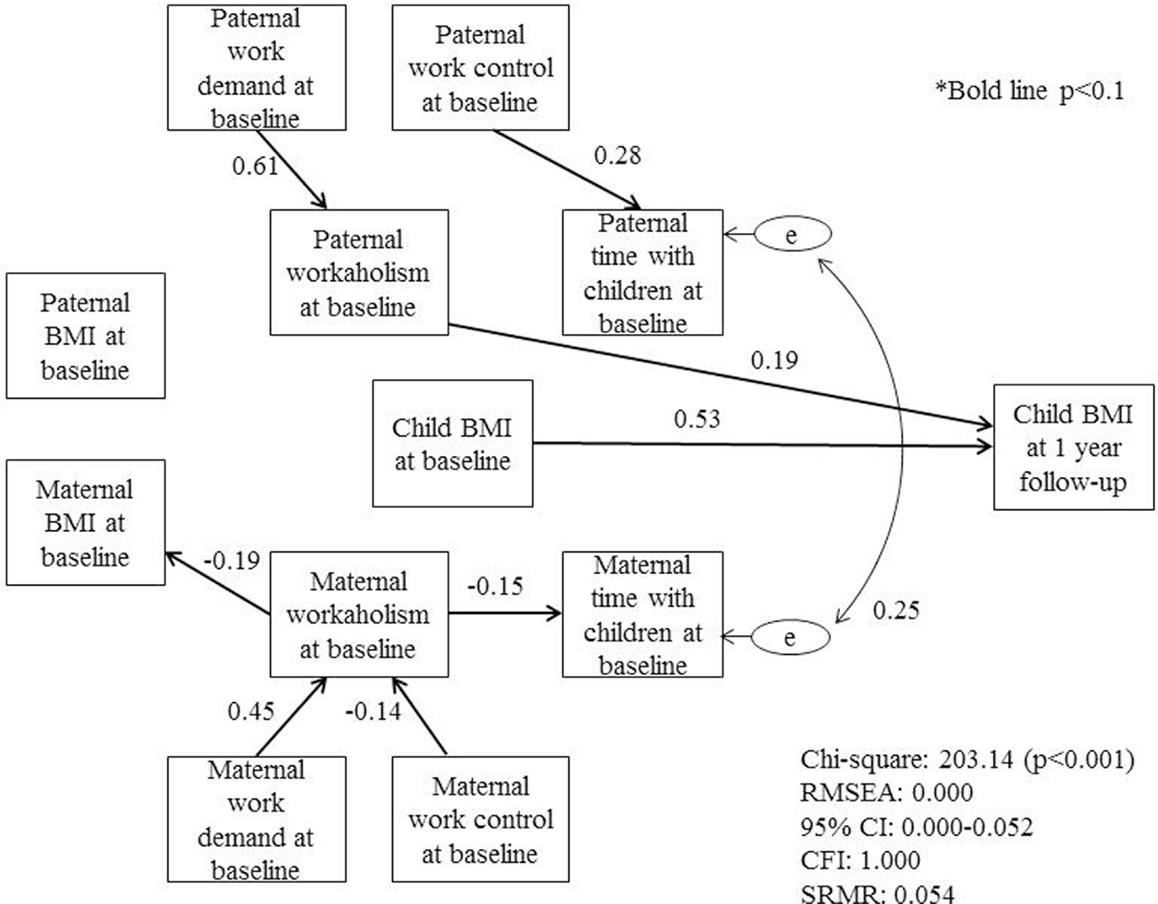 Previous studies reported that maternal working hours were associated with childhood obesity (16–20), and few studies investigated the impact of the paternal work environment. Champion et al. revealed that non-standard paternal work schedules, defined as “shift work and working after 1800 hours (including work at home), overnight, or on weekends,” showed a higher odds ratio for child overweight or obesity than did a standard working schedule after adjustment for maternal working schedules among families with 9-year-old children in Australia (21). This is consistent with the findings of the current study because workaholism is associated with working at home or work-to-family conflict (38), which was included as a non-standard work schedule, such as night-time shift working. Further, Morrissey reported that both maternal and paternal employment intensities are associated with higher child BMI during preschool (22). As our study focused only on dual-income families, the impact of paternal workaholism might be found only if both the mother and father are working. Nonetheless, because of the rise of women returning to work after having children, the findings suggest the importance of paternal workaholism on child BMI, which is usually not considered in the prevention of childhood obesity.

The lack of association between maternal workaholism and child BMI might be surprising, considering the previous studies that reported maternal working hours were associated with childhood obesity (16–20). Possibly, maternal working may not be associated with the poor quality of parenting, such as providing unhealthy food that might induce obesity of children (39), because of social pressure embedded in Japanese culture. Generally, mothers are expected to be the main caretaker of her child regardless of her working status. This trend is reflected by the high rate of maternity leave (83.4%) and low rate of paternity leave (2.8%) in 2010 (40). As the current study is the first to report on the null association between maternal workaholism and child BMI, further replication of the study is needed to confirm the association.

This study has several limitations. First, the sample size of this study was small; more studies with larger sample sizes are needed to validate our findings. Second, although we tried to capture a population-based sample, the participants may not be a representative sample, given the relatively low response and follow-up rate. Third, as parents reported their child’s weight and height, measurement error might exist, even if parental reports of child height or weight have been shown to be accurate (33, 34).

Based on our findings, we suggest engaging employers of fathers for reducing work demands and increasing work control through workplace education. As shown in Figure 1, work demands were associated with workaholism. Reducing paternal work demands might be necessary to reduce paternal workaholism, which in turn could decrease child BMI if the mother is also working. On the contrary, although paternal work control was associated with paternal time spent with children, increasing work control to prevent child obesity may not be effective because time spent with children was not associated with child BMI. In a systematic review of prevention programs for childhood obesity, study settings were limited to school, home, primary care facilities, or the community, and no study was implemented in a workplace setting (41). Further studies in the workplace are needed to address this gap to prevent childhood obesity.

Paternal, but not maternal, workaholism was associated with an increase in child BMI after 1 year. Interventions that address paternal workaholism by reducing paternal work demands might be effective to prevent overweight in children. Further study is needed to replicate these findings using a larger sample and to elucidate the mechanisms underlying the association between paternal workaholism and child BMI.

All procedures performed in studies, involving human participants, were in accordance with the ethical standards of the Institutional Research Committee of the University of Tokyo and with the 1964 Declaration of Helsinki and its later amendments or comparable ethical standards.

TF and AS conceived the study; AS, MTo, and KS collected data; TF analyzed and wrote the first draft; and AS, MTo, KS, MTa, IW, NI, and NK finalized the manuscript. All authors approved the final version of the manuscript.

We thank all participants who contributed to the study. We also thank Ms. Emma L. Barber of the Department of Education for Clinical Research, National Center for Child Health and Development, for editing this manuscript. This study was supported by grants from a Grant-in-Aid for Scientific Research on Innovative Areas, the Ministry of Education, Culture, Sports, Science and Technology, KAKENHI (22300228).

36. World Health Organization. Physical Status, the Use and Interpretation of Anthropometry. Geneva: WHO (1995).

Copyright: © 2016 Fujiwara, Shimazu, Tokita, Shimada, Takahashi, Watai, Iwata and Kawakami. This is an open-access article distributed under the terms of the Creative Commons Attribution License (CC BY). The use, distribution or reproduction in other forums is permitted, provided the original author(s) or licensor are credited and that the original publication in this journal is cited, in accordance with accepted academic practice. No use, distribution or reproduction is permitted which does not comply with these terms.