Objective: The purpose of this study was to examine if deep retraction pockets (DRPs) in the posterior cul-de-sac and uterosacral ligaments could be a manifestation of endometriosis and if excision of these pockets improves pain symptoms and quality of life.

Results: The 107 consecutive patients who presented with preoperative deep dyspareunia were included in the study, and the median postoperative follow-up was 13 months. Endometriosis was confirmed histologically in any location excised in 88/107 (82.2%) of the women, and 31 DRPs were excised from 25 women with DRPs in the posterior cul-de-sac or uterosacral ligaments, of which 15/31 (48.4%) had endometriosis. Of the 10 DRPs without visible surface lesions, 3 (30.0%) had endometriosis on histology. Pain symptoms and quality of life significantly improved after excision surgery, whether or not DRPs were present. Women who had endometriosis in their DRP also had significant improvement in deep dyspareunia and chronic pelvic pain and quality of life. Results did not differ when patients who took postoperative hormonal suppression were removed from the analyses.

Conclusion: Patients had significantly improved pain symptoms and quality of life after excision surgery, whether or not DRPs were present. This study demonstrated that a DRP may be a manifestation of endometriosis (even with a clear surface of the pocket), so that DRPs should be excised to achieve optimal excision of endometriosis.

A pelvic peritoneal pocket (or Allen-Masterson pocket) in association with endometriosis (Figure 1) was first described by Sampson (1). Chatman (2), Chatman and Zbella (3), and Redwine (4) later demonstrated the importance of recognizing peritoneal pockets as a potential manifestation of endometriosis, as endometriosis in such structures in women with pelvic pain otherwise could remain undiagnosed and untreated. 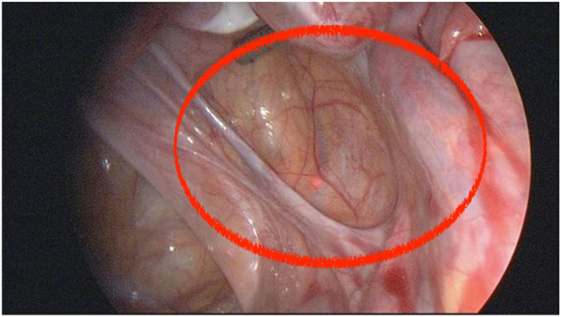 Figure 1. This annotated photo shows the appearance of a deep retraction pocket, with a visible manifestation of endometriosis, seen at laparoscopy for pelvic pain. There are abnormal red and white lesions suspicious for endometriosis at the base of the pocket.

The purpose of this study was to examine if deep retraction pockets (DRPs) in the posterior cul-de-sac and uterosacral ligaments could be a manifestation of endometriosis, and if excision of these pockets improves pain symptoms and quality of life.

Consecutive patients seen for pelvic pain at the Center for Endometriosis at Saint Louis University (SLU), a referral center for the surgical management of endometriosis, were recruited for the study. Patients included in this study were those who described deep dyspareunia on a standard of care preoperative questionnaire and who underwent laparoscopic excision surgery to relieve pain symptoms. All patients underwent optimal or complete excision of all visible manifestations of endometriosis, including peritoneal retraction pockets.

Preoperative data, operative data, and follow-up data were collected prospectively as part of an on-going database approved by the SLU Institutional Review Board (IRB). Symptom data were collected on deep dyspareunia and dyschezia by a 10-point visual analog scale (VAS) and on quality of life by a simple 100-point scale (7) before and after excision surgery. Operative data collected included location of abnormal peritoneum and DRPs (defined as estimated to be greater than 0.5 cm), phenotype or color of lesions excised, and diagnosis of endometriosis by histology. Patients were not specifically recommended to take hormonal suppression after surgery, though they were free to do so for contraception or to induce amenorrhea. 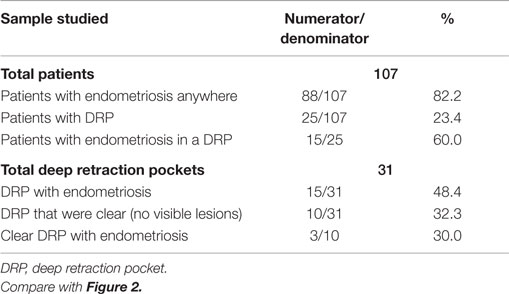 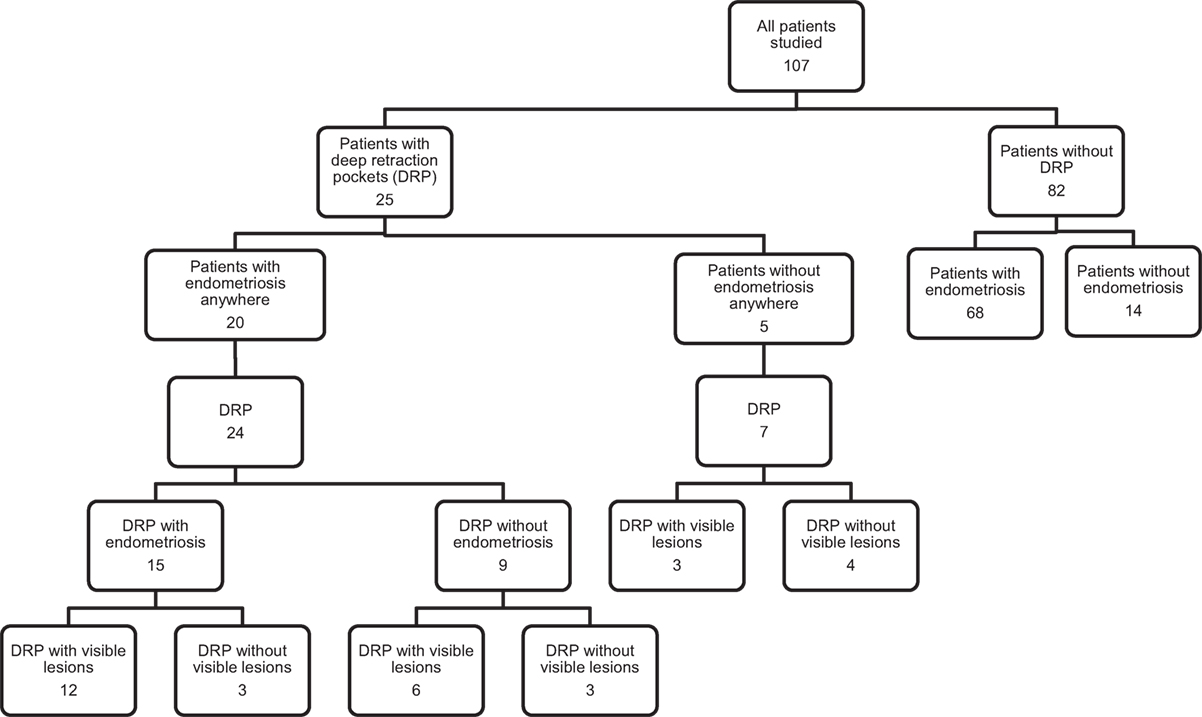 Figure 2. Flow of participants through the study. 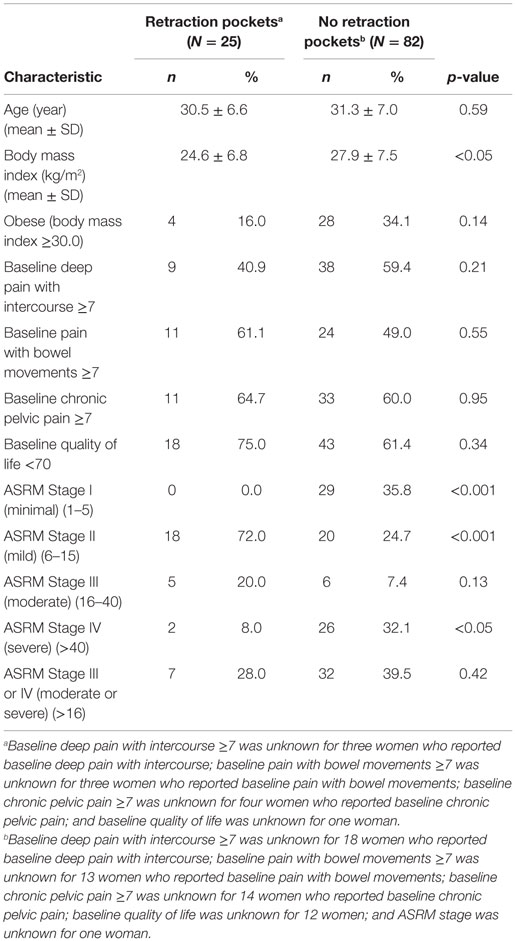 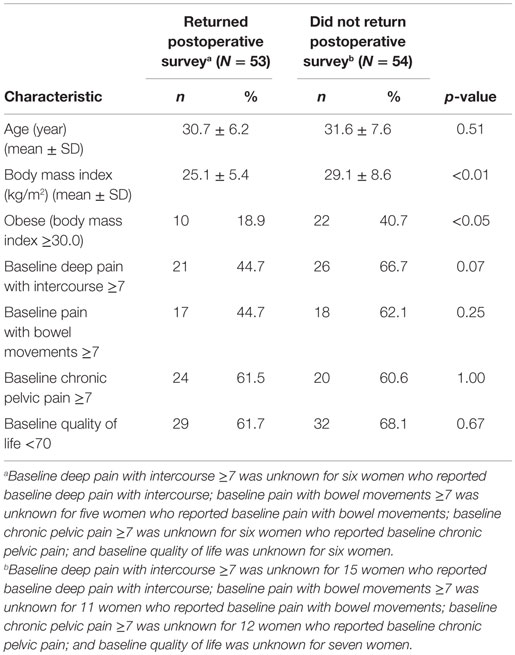 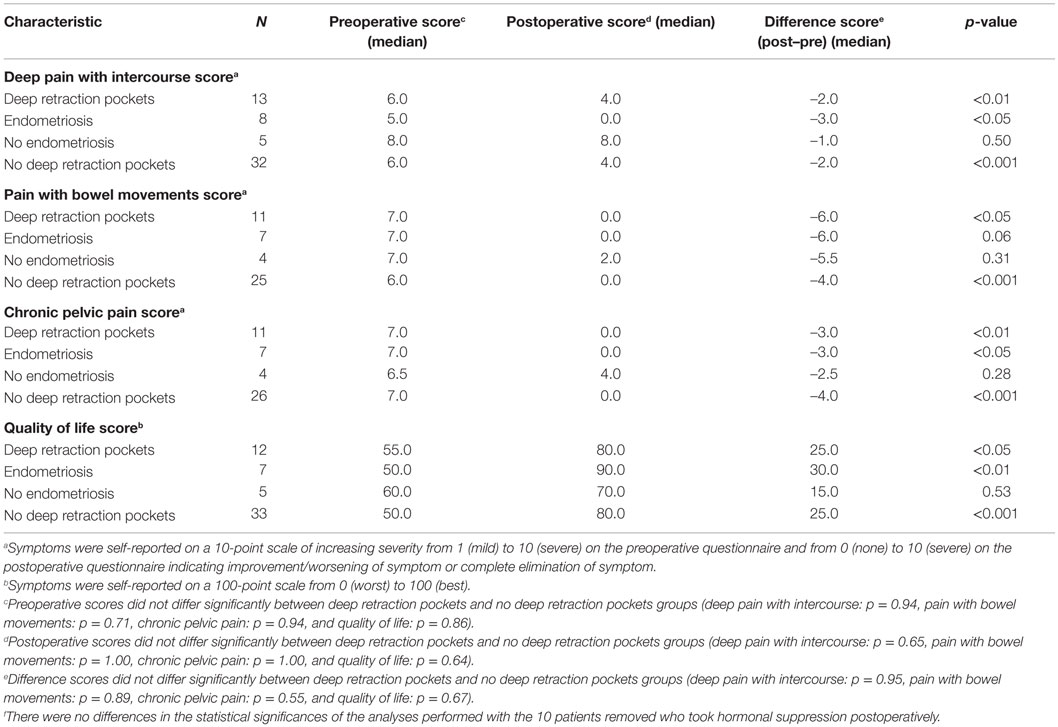 This study confirms the association of DRP, also called Allen-Masterson windows (2), and endometriosis. In our study, 25/107 (23.4%) of the women with deep dyspareunia had DRP within the posterior cul-de-sac or uterosacral ligaments, the majority of whom (15/25, 60%) had endometriosis diagnosed by histology in the pocket [Vilos (8) and Moen (9), only 12%]. These results are comparable to those of other studies looking at the association of retraction pockets and endometriosis, including Chatman (3) (17%) and Redwine (4) (18%). Our study adds the observation that even a clear pocket, a DRP without a visible surface lesion inside the pocket, can be associated with endometriosis up to 3/10 (30%) of the time. Thus, the retraction pocket itself, with or without visible surface lesions, can be a manifestation of endometriosis and should be treated.

Since endometriosis can be present (by histology) even if the surface of a DRP is clear, and given that quality of life improves when all manifestations of endometriosis are excised, including DRP, we recommend that DRP be removed at the time of excision surgery in patients with deep dyspareunia. Our patients had significantly improved quality of life after excision surgery, whether or not DRPs were present. Given that this study demonstrated that a DRP may be a manifestation of endometriosis (with or without visible lesions on the surface of the pocket), DRP also should be excised since the rate of recurrence or persistence of endometriosis has been shown to be very low after optimal excision of all possible visible manifestations of endometriosis (11). Since DRPs always were excised when present, further studies comparing outcomes after excision of DRP versus not excising DRP are needed to confirm this recommendation.

Limitations of our study include the lack of complete follow-up data (49.5% completion rate), lack of validated sexual functioning scales in measuring patient outcomes, lack of more detailed quality of life measures, and the lack of a comparison group where DRPs were seen but not treated. Strengths of our study include the prospective data collection of symptoms, quality of life before and after surgery and of the operative data, and consistency in patient treatment by a single surgeon committed to optimal excision.

Medical therapy has been shown to improve deep dyspareunia and quality of sex life (12). The majority of patients in our study did not take postoperative hormonal suppression. Future research also should compare medical and surgical therapies for deep dyspareunia and quality of life. Again, we recommend that validated sexual functioning questionnaires be used to assess patient outcomes in such studies.

The authors declare that the research was conducted in compliance with ethical standards.

Special thanks to Erica Sher, medical student at Saint Louis University School of Medicine, for assistance in preparing a poster that was presented at the 12th World Congress on Endometriosis, São Paulo, Brazil, in April, 2014, to Jim Rice for maintenance of the database, and to Collin Miller for creation of the tables and figures. Jim Rice and Collin Miller are from the Division of Research, Department of Obstetrics, Gynecology, and Women’s Health, Saint Louis University School of Medicine.

1. Sampson JA. Metastatic or embolic endometriosis, due to the menstrual dissemination of endometrial tissue into the venous circulation. Am J Pathol (1927) 3:93–110.143.

Copyright: © 2016 Yeung, Logan and Gavard. This is an open-access article distributed under the terms of the Creative Commons Attribution License (CC BY). The use, distribution or reproduction in other forums is permitted, provided the original author(s) or licensor are credited and that the original publication in this journal is cited, in accordance with accepted academic practice. No use, distribution or reproduction is permitted which does not comply with these terms.