Obesity is a global public health crisis and is strongly correlated with chronic health conditions such as diabetes, cardiovascular disease, and high blood pressure. Among children and adolescents aged 2–19 years, obesity rates are on the rise (1). According to the World Health Organization (WHO), 41 million infants and young children were overweight or obese in 2016 (2). There has been a ten-fold increase in the number of obese children and adolescents over the last four decades (3). The Centers for Disease Control and Prevention (CDC) National Center for Health Statistics (NCHS) found the obesity prevalence was 13.9% among 2- to 5-year-olds, 18.4% among 6- to 11-year-olds, and 20.6% among 12- to 19-year olds. Hispanic youth (25.8%) and non-Hispanic African American youth (22.0%) had a higher prevalence of obesity than among non-Hispanic white (14.1%) youth and non-Hispanic Asian (11.0%) youth (4).

Interventions to reduce childhood obesity are multi-faceted and must include several components. Among these interventions, breastfeeding—a behavioral variable—has been shown to decrease the risk of childhood obesity and is inversely associated with weight gain velocity and BMI among infants (5–7). While any breastfeeding is protective against childhood obesity, the WHO recommends exclusive breastfeeding for 6 months, as it conveys the strongest protective effect (8). In a recent meta-analysis, recent review, researchers concluded that exclusively breastfed infants have a 31% lower chance of later developing overweight and obesity (9). In addition, formula-fed infants consume more milk and gain weight more rapidly than breastfed infants (10). The National Academy of Medicine recommends breastfeeding as part of a broader strategy to preventing childhood obesity and recognizes that the U.S. is falling short in its efforts to support breastfeeding (11). Breastfeeding is part of the CDC's plan for state implementation of obesity prevention strategies which include nutrition, breastfeeding, physical activity, and decreased screen time (12). The promotion, protection and support of breastfeeding for the first 6 months is a critically important public health priority.

Despite the evidence that breastfeeding is the optimal feeding method for infants, breastfeeding rates remain low across the U.S. According to the CDC's 2018 Breastfeeding Report Card, among infants born in 2015 in the United States, 4 out of 5 (83.2%) started to breastfeed, but just over half (57.6%) were breastfeeding at 6 months, and only about one-third (35.9%) continued breastfeeding to 12 months (13). When parents receive support from a professional LSP who provides education and counseling during the breastfeeding process, breastfeeding initiation and duration rates increase (14). Interventions provided by LSPs within their respective Scopes of Practice, such as implementing the best practice of placing mother and baby skin-to-skin for the first hour immediately following birth, educating a family about early infant feeding cues, and delivering face-to-face anticipatory guidance to families have all been shown to increase breastfeeding duration and exclusivity (15, 16).

The United States Breastfeeding Committee (USBC), the American College of Obstetricians and Gynecologists (ACOG), and the CDC recognize Certified Lactation Counselors (CLCs) and International Board Certified Lactation Consultants (IBCLCs) as professional breastfeeding supporters (17–19). However, there are currently only 4.57 CLCs and 3.79 IBCLCs per 1,000 live births in the U.S. (20).

This is a cross-sectional, observational study using retrospective data. 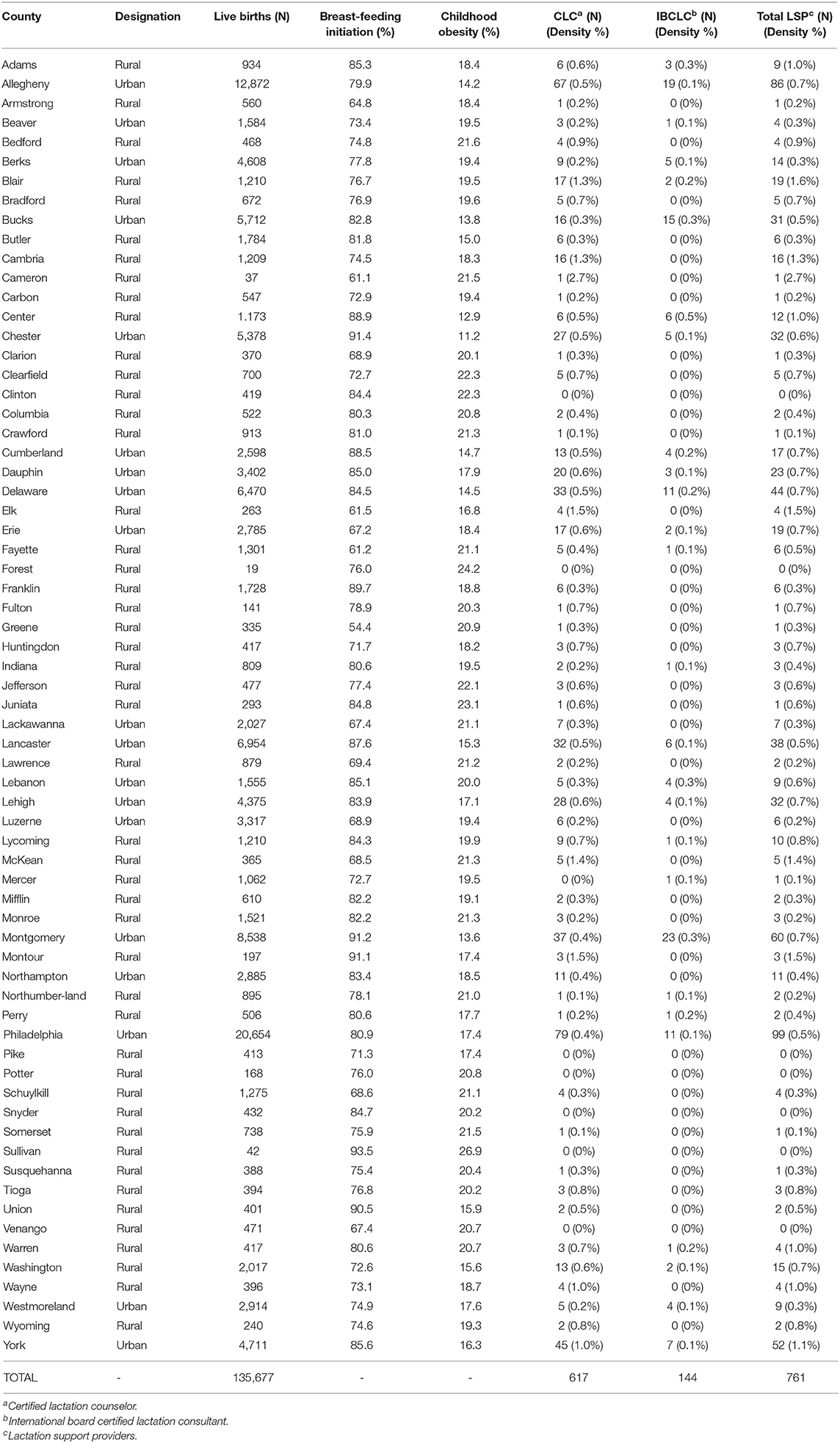 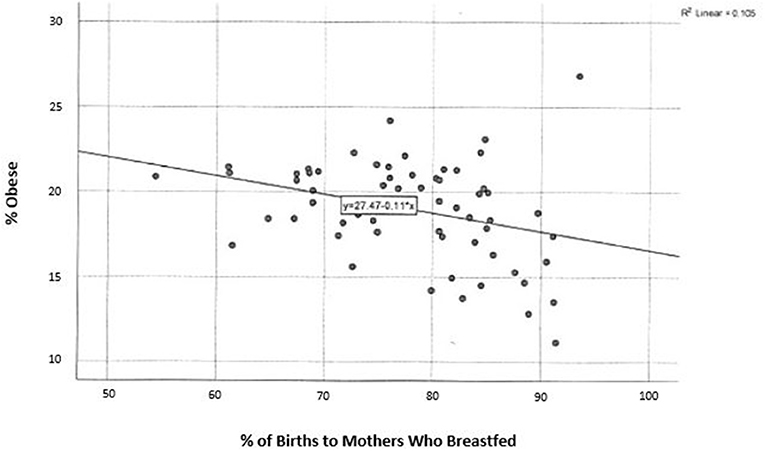 Figure 1. Percent of live births to mothers who breastfed and childhood obesity in Pennsylvania.

LSPs are unequally distributed throughout the state, with more LSPs populated in urban areas. The least amount of CLCs are located in the northwest area, excluding Erie county (Figure 2). There is a significant, inverse correlation between obesity rates and geographic access to CLCs in the state, r(66) = −0.526, p < 0.01 (Figure 4). According to the PA Department of Health, the southeastern counties of PA have the highest breastfeeding rates in the state (Table 1). In these counties, childhood obesity rates are the lowest among all geographic districts (15.2%). 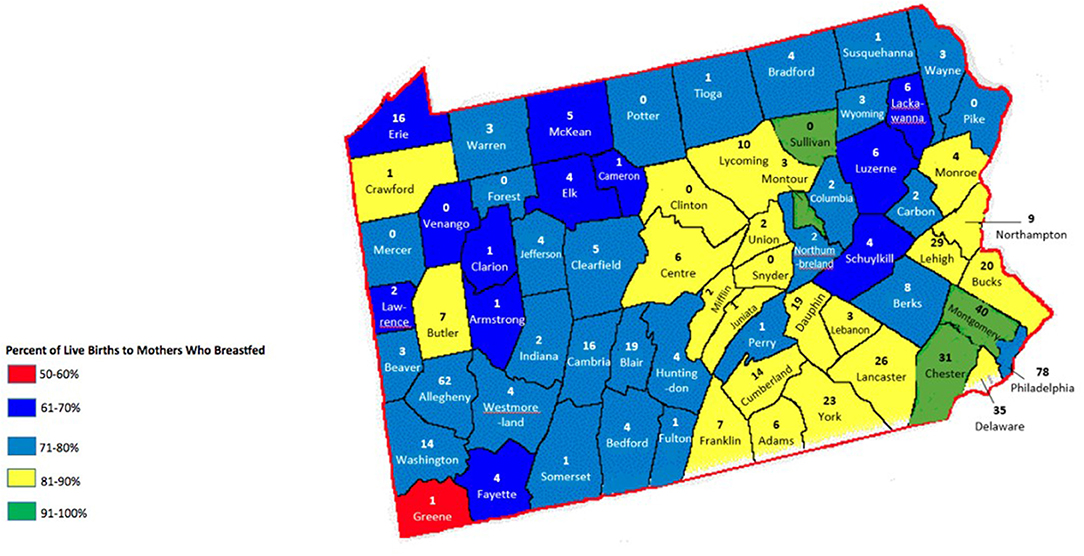 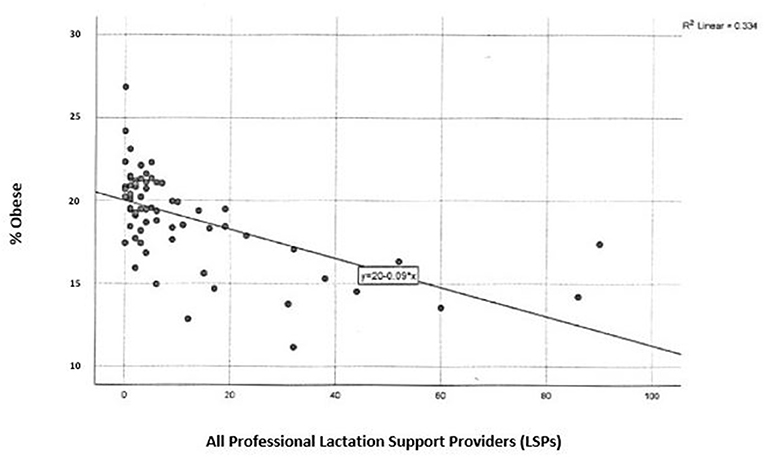 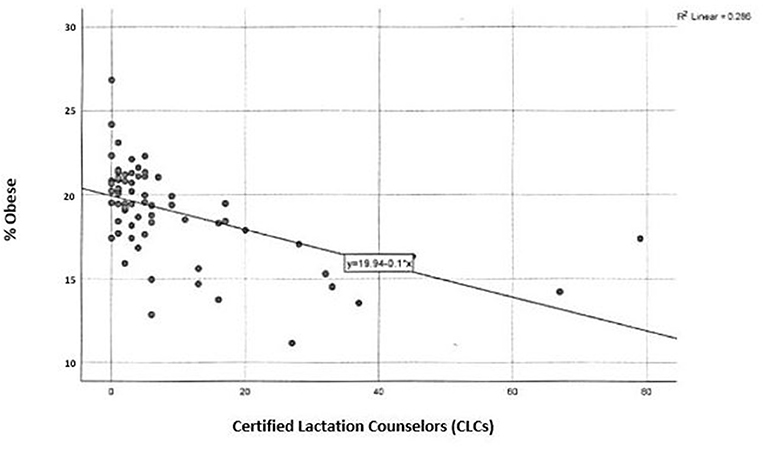 There are 761 professional LSPs in PA, of which 617 are CLCs and 144 are IBCLCs (Table 1). The highest concentrations of all LSPs in PA are in the southeast district of the state and there are more CLCs spread throughout all counties in PA as compared to IBCLCs (Figure 5). There is a significant, inverse relationship between childhood obesity rates and geographic access to all professional LSPs in the state, r(66) = −0.567, p < 0.01 (Figure 3).

The data we have examined show an association between low rates of childhood obesity in counties with more LSPs in PA. LSPs, such as CLCs and IBCLCs, who support families to achieve their personal breastfeeding goals, play a pivotal role in increasing breastfeeding initiation and continuation rates.

Breastfeeding as an infant feeding choice should be viewed as a public health strategy to address the rising rates of childhood obesity in PA. Equitable geographic access to professional lactation support, as examined in this study, is only one component contributing to the ability to seek care when breastfeeding. Paying for LSP care may also affect a family's decision to seek help and support (36). In rural PA counties, the average household income for families is generally lower than that of families in urban counties across the state (37). Financial accessibility may be a primary consideration when accessing lactation support in rural communities.

Passed in 2010, the Affordable Care Act (ACA) requires insurers to provide coverage of breastfeeding supplies and support services (38). As some post-implementation analyses have shown, breastfeeding initiation rates did increase post-ACA implementation (39). Unfortunately, many private and public insurance companies are not paying for lactation care and services and have not reimbursed their policyholders for these costs if incurred. With limited geographic access to a professional LSP and the financial strain of receiving support, families in rural counties in PA may be discouraged from seeking help and, as a result, may not continue to breastfeed their children. As demonstrated in the current study, rural counties in PA, specifically those in the northwest district, have the highest rates of childhood obesity across the state and the lowest density of professional LSPs.

The IBCLC data were collected using publicly available data from the ILCA and USLCA online search databases, which are membership organizations. If an IBCLC is not listed as a provider in their county on the ILCA or the USLCA websites, they were not included in the total number of IBCLCs per county. A preferred data source using per county counts from the International Board Certified Lactation Consultant Examiners (IBLCE) was not made available for this research.

The current study utilizes retrospective data to assess the relationship between childhood obesity prevalence, breastfeeding rates, and geographic access to professional lactation support. Due to the nature of the available data, potential confounding variables were not controlled for. The strength of the current study and its results validate the need for a future, prospective study on this subject where potential confounding variables can be controlled.

Finally, many LSPs may hold their LSP credential, but may not be actively working in that role. These individuals were counted as a LSP in PA, but may be working in a different role, with limited interaction between themselves and breastfeeding families.

The facilitation of breastfeeding and assisting families in reaching their breastfeeding goals often requires support beyond the immediate postnatal period. Lactation support, counseling, and education provided by a CLC or an IBCLC is just one of many factors contributing to a successful breastfeeding experience.

Ethical approval for this study was not required in accordance with local legislation and national guidelines. No human studies are presented in this manuscript. This retrospective study involved the counts of individuals in the public arena using only publicly available or accessible records without contact with the individual/s. The current research is based on a review of published/publicly reported literature.

The authors declare the following areas of interest: the authors hold the professional LSP credentials, CLC, and IBCLC. One author was employed by the Academy of Lactation Policy and Practice (issuer of the credential CLC), one author was employed by the Healthy Children Project, Inc. (an organization that provides training for both the CLC and IBCLC examination preparation), and one author holds the credential ANLC and is a lactation consultant in private practice in PA.

Copyright © 2020 Blair, MacGregor and Lee. This is an open-access article distributed under the terms of the Creative Commons Attribution License (CC BY). The use, distribution or reproduction in other forums is permitted, provided the original author(s) and the copyright owner(s) are credited and that the original publication in this journal is cited, in accordance with accepted academic practice. No use, distribution or reproduction is permitted which does not comply with these terms.