The Impact of Environmental Pollution and Economic Growth on Public Health: Evidence From China

The next arrangement of this paper is as follows: the second part sorts out the relevant research results of environmental pollution, economic development and public health, and proposes the research innovation points of this paper; the third part mainly includes research methods and data sources; the fourth part is the research results that show the main findings of this research, and the fifth part concludes this research, puts forward corresponding policy recommendations, and summarizes the shortcomings of this research.

In the process of panel data regression analysis, in order to ensure the stability of the research data, it is necessary to perform a unit root test on the panel data, so as to avoid false regression in the data (17, 18). If it passes the test, it means that the data is stationary and there is no unit root; if it does not pass the test, the data needs to be differentiated to eliminate the unit root and change to a stationary sequence. Therefore, the following auto regressive model is established:

The estimation process of the panel data model can be divided into two steps: first, determine the model form. Panel data model can be divided into constant coefficient model, variable intercept model and variable coefficient model according to whether there is individual influence and structural changes; second, describe the model impact. That is, making a decision between random effect model and individual fixed effect model. The basic models of panel data are as follows:

There are two main assumptions:

In order to study the relationship between economic development, environmental pollution and public health, this paper is based on the Grossman health production function, and draws on the research results of Lu et al. (19) to add economic factors and pollution factors into the model. The regression model is as follows:

The control variables are medical service conditions, residents' living standards and demographic characteristics. The indicators of medical service conditions include the number of health personnel (NHP) and the price of medical and health services (PMHS). The indicators of residents' living standards include per capita disposable income (PDI) and urbanization rate (UR) (23). The population aging rate (PAR) was used as the index of population characteristics.

The economic development status of each province in China is different, and the degree of environmental pollution is also significantly different (24), so the health level of each province is also different. In order to better understand the public health level of various regions in China, This paper divided 30 provinces into eastern region, northeast region, central region and western region according to its geographical location (see Table 1). 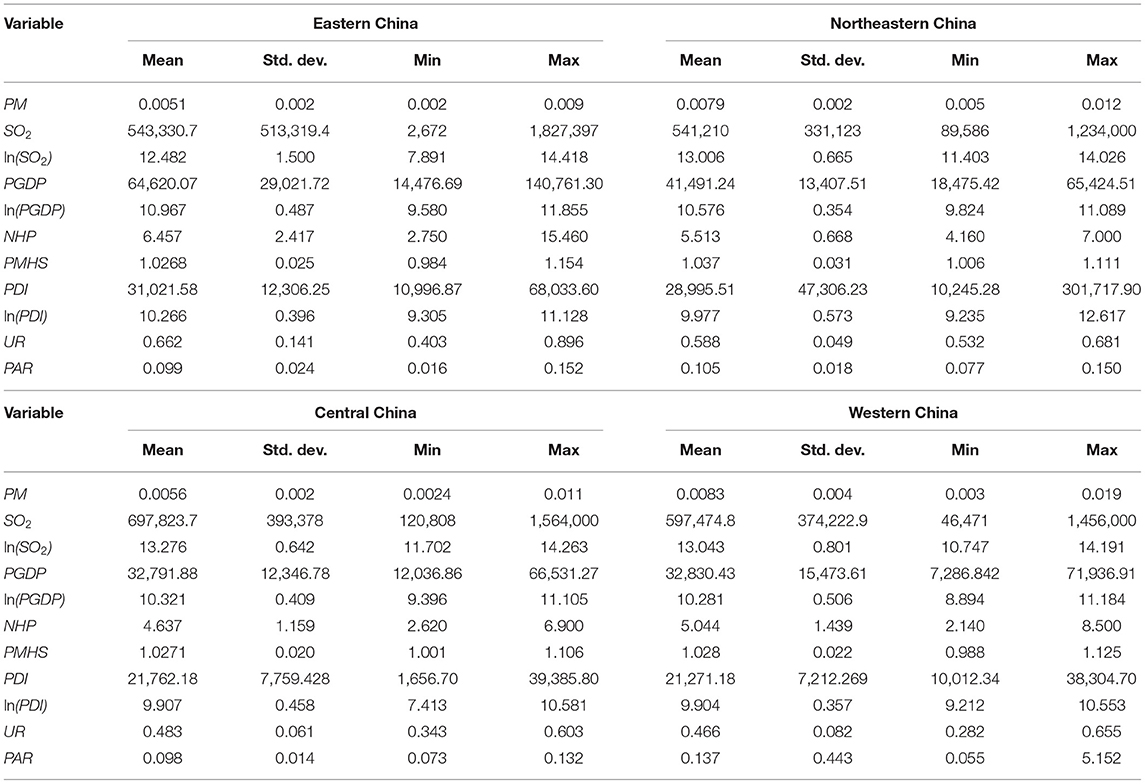 Since the units of each variable are different, in order to narrow the dimensional gap between the data and facilitate subsequent regression calculations, it is necessary to standardize all the variables after taking the logarithm of some data. At the same time, in the process of panel regression, in order to avoid unstable variables and false regression, it is essential to test the unit root of the data to ensure the effectiveness of the data (25). Since this paper uses the data of 30 provinces in China from 2007 to 2018, which is a short panel, and the number of cross-sectional data is larger than the number of time series, so the HT test for short panel data is used for unit root test (see Table 2). The original sequence has unit roots and is a non-stationary sequence. Due to the volatility of the data, the difference method is used to eliminate the unit root. As can be seen from Table 2, each data passes the HT test under a confidence level lower than 1%, rejecting the original hypothesis, that is, the data after the first-order difference is stable and there is no unit root. However, all variables are stable only after the first-order difference, that is, the first-order single integration accumulates force, it still needs to be co-integrated test whether there is a long-term stable equilibrium relationship between the observed variables. 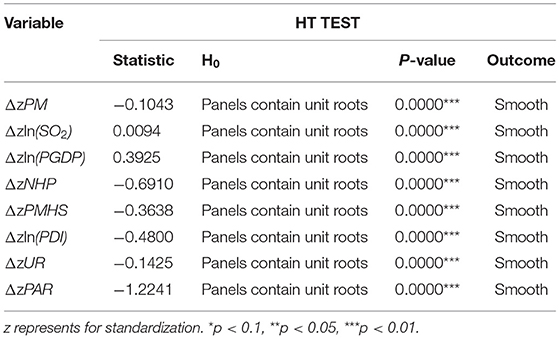 Co-integration test methods include EG two-step method and Johansen co-integration test method. In this paper, the Pedroni test suitable for heterogenous test and Kao test for same root test in EG two-step method are mainly used. The null hypothesis is that there is no co-integration test. As can be seen from Table 3 that the national panel data rejects the null hypothesis under the Kao test and the Pedroni test, that is, through the co-integration test, each explanatory variable and the explained variable have a long-term stable equilibrium relationship, the data volatility is small, and the pseudo regression phenomenon is avoided. Therefore, the next research can be carried out. 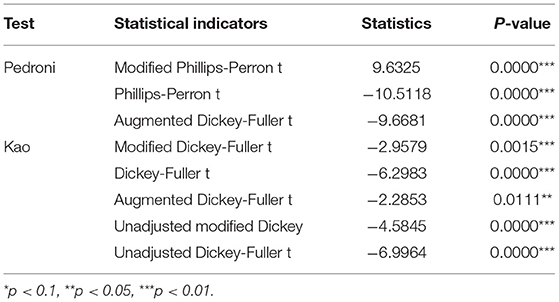 According to Equation (6), an individual fixed effect model is constructed for regression analysis to obtain the results (see Table 5).

Comparing the regression results of the four regions, the health status of the four regions is significantly affected by SO2 and per capita GDP. From the SO2 emission indicators, the coefficients of each region are 1.011, 1.536, 0.560, and 0.745, respectively. It is observed that the environmental pollution in Northeast China has the greatest impact on the health level, that is, for every 1% increase in sulfur dioxide, the perinatal mortality will increase by 1.536%. From the variable of per capita GDP, all regions passed the test at the significance level of 1%. Among them, the health status of the western region is more likely to be affected by economic growth. The main reason is that the economic development level of the western region is low, and people tend to consume expenditure and ignore service expenditure (29), Therefore, economic growth is conducive to enhancing the service expenditure and health level in the western region.

In terms of regions, the urbanization level and the aging rate in the eastern region have pasted the test under the significance level of 1%, with coefficients of −0.821 and 0.957, respectively, showing that the urbanization rate and mortality in the eastern region are negatively correlated, while the aging rate and mortality are positively correlated. This is primarily due to the rapid economic development and high urbanization rate in the eastern region (30), it is conducive to increasing residents' investment in public health (31), while the eastern region has a high aging rate and greater demand for health. Every 1% increase in the number of health workers in Northeast China will reduce the mortality by 0.663%, and pass the significance test of 5%. The basic reason is that sulfur dioxide emission has great impact on health status (32, 33). Therefore, increasing the number of health workers can promote the health level. The coefficient of health population in the central region is 0.532, which is significantly positively correlated with mortality. This is contrary to the hypothesis. The main reason is that the population density in the central region is low, and the per capita health population may be greater than that in other regions (34), while the low level of economic development promotes the high mortality. The western region is greatly affected by people's disposable income, and the higher the per capita disposable income, the lower the mortality. This is because the western region is restricted by the level of economic development and the residents have a lower tendency to spend money on medical services (35). To sum up, the health level of various regions in China is affected by different factors, and there are significant regional differences. Therefore, it is indispensable to develop public health services according to local conditions.

Based on the panel data of 30 provinces in China from 2007 to 2018, this paper uses the individual fixed effect model to conduct regression analysis and heterogeneity analysis, and to explore the impact of regional economic growth and environmental pollution on public health. From the study, we can find that: First, the health status of various regions in China is significantly affected by other factors in addition to the variables of environmental pollution and economic growth. For example, per capita disposable income and urbanization rate are negatively correlated with mortality, per capita disposable income is significant at 5% level, and urbanization rate is significant at 10% level. Second, there is a long-term and stable equilibrium relationship between China's economic growth, environmental pollution and public health. Third, SO2 and perinatal mortality are significantly positively correlated, and have passed the significance test of 1%. For every 1% increase in sulfur dioxide emissions, the mortality increase by 0.456%. The per capita GDP has a positive effect on the reduction of perinatal mortality. If the per capita GDP increases by 1%, the perinatal mortality will decrease by 0.546%.Besides, the health level is also significantly affected by two control variables, namely per capita disposable income and urbanization rate. Fourth, environmental pollution affects the impact of economic growth on public health. As can be seen from Table 5, after introducing the variable of sulfur dioxide emission, the coefficient of total per capita domestic production changes from −0.427 to −0.546. Fifth, there are significant regional differences in the health level of the four regions and they are affected by different factors. In Northeast China, environmental pollution has the greatest impact on public health, while in Western China, the economic development level has the greatest impact on public health. Based on the above conclusions, in order to better promote the level of public health, the following policy suggestions are put forward:

First, the government should focus not only on economic growth, but also on environmental pollution and public health (36). Above all, the government should shift the mode of economic development, develop an environment-friendly society, and promote sustainable economic development. Moreover, the government should increase capital investment to promote the optimization and upgrading of industrial structure and increase support for new energy industry, so as to reduce the impact on the environment in the process of economic development. Eventually, the government should increase health care expenditure and further promote the infrastructure of medical service. Second, enterprises should clarify their responsibility of environmental protection and accelerate the application of energy-saving technologies (37). While enterprises have contributed to the economic growth, due to the external effects in the development of market economy, they have caused significant harm to the environment at the same time. Therefore, it is necessary to clear corporate social responsibility (38). Third, the four regions should adopt policies according to local conditions to improve the level of public health. The eastern region should pay Attention to the negative impact of aging population on public health, the northeast and central regions should focus on the construction of medical infrastructure and increase the number of health personnel, and the western region should accelerate economic development to promote the level of public health.

XZ and MJ: Methodology. XZ: writing—original draft preparation. WZ: writing—review and editing. All authors have read and agreed to the published version of the manuscript.

Copyright © 2022 Zhao, Jiang and Zhang. This is an open-access article distributed under the terms of the Creative Commons Attribution License (CC BY). The use, distribution or reproduction in other forums is permitted, provided the original author(s) and the copyright owner(s) are credited and that the original publication in this journal is cited, in accordance with accepted academic practice. No use, distribution or reproduction is permitted which does not comply with these terms.