Methods: This study was a retrospective observational study, and the study period was the 4 years from January 2016 to December 2019. We included cases for which ambulances were dispatched from the Osaka Municipal Fire Department (OMFD). The primary outcome of this study was unnecessary ambulance use. We calculated a PS by fitting a logistic regression model to adjust for 10 variables that existed before use of the telephone triage service. To ensure the robustness of this analysis, we used not only PS matching but also a multivariable logistic regression model and regression model with PS as a covariate.

Conclusions: In this study, we were able to statistically evaluate the effectiveness of telephone triage service already in use by the public using the statistical method with PS. As a result, it was revealed that the use of a telephone triage service was associated with a lower proportion of unnecessary ambulance use in a metropolitan area of Japan.

The emergency medical service (EMS) is essential social system around the world. However, unnecessary ambulance use and frequent ambulance request are problems of public health in many countries (1–3). In Japan, anyone can call for an ambulance free for charge, and the number of ambulance dispatches has been increasing in recent years (4). As a result, the time duration from ambulance call to hospital arrival is being prolonged (4), and problems such as difficulty in hospital acceptance are occurred by increasing number of patients transported by ambulance (5). This may affect ambulance dispatch to truly emergency patients such as cardiopulmonary arrest and severe trauma with shock.

This was a retrospective observational study, and the study period was 4 years from January 2016 to December 2019. Osaka city is one of the largest metropolitan areas in Japan, covering an area of 225.30 km2 with a population of 2.75 million (12). In Japan, the telephone triage service in emergency care and call for ambulance are public services, and anyone can use these services free of charge. In this study, the inclusion criteria were cases for which ambulances were dispatched from the Osaka Municipal Fire Department (OMFD), and the exclusion criteria were cases in which more than one patient was transported by ambulance or cases with missing data. Because we used anonymized data provided from the OMFD, the requirement of obtaining patients' informed consent was waived. This study was approved by the Ethics Committee of Osaka University Graduate School of Medicine (approval number: 16070). We wrote this manuscript based on the Strengthening the Reporting of Observational Studies in Epidemiology (STROBE) statement to assess the reporting of cohort and cross-sectional studies (13).

The purpose of this study was to evaluate the effectiveness of an intervention in which people use telephone triage service and the nurses assess the urgency of symptoms and triage callers. However, since the telephone triage service was already in existence in Osaka, Japan, we used propensity score matching as the main statistical analysis in this study. We calculated a PS by fitting a logistic regression model to adjust for the 10 variables that existed before the use of the telephone triage service. The variables used to calculate a PS were age, sex, calendar year, month, day of the week, time of day, public holiday and weekend, reason for ambulance call, administrative districts, and location of occurrence. The time of day was classified in 1-h increments. Reason for ambulance call and location of occurrence were categorized according to the ambulance record in the OMFD (20). Administrative districts were classified into 24 areas defined by Osaka city. We performed one-to-one pair matching between cases for which an ambulance was dispatched via telephone triage service or not by nearest-neighbor matching without replacement, using calipers of width equal to 0.2 of the standard deviation mean difference (SMD) of the logit of the PS. Covariate balances before and after matching were checked by comparison of SMD. A SMD of <0.1 was considered to show a negligible imbalance between the two groups (21).

To ensure the robustness of the analysis with PS matching model, we also analyzed with a multivariable logistic regression model and a regression model with PS as a covariate. The variables entered into the multivariable logistic regression model were the 10 variables used in the calculation of the PS, and telephone triage service. In addition, we divided the age groups into children (0–14 years old), adults (15–64 years old), and the elderly (65 years old and over) and assessed them in the same way. All tests were two-tailed, and P values of <0.05 were considered statistically significant. All statistical analyses were performed using SPSS ver 27.0J (IBM Corp. Armonk, NY). 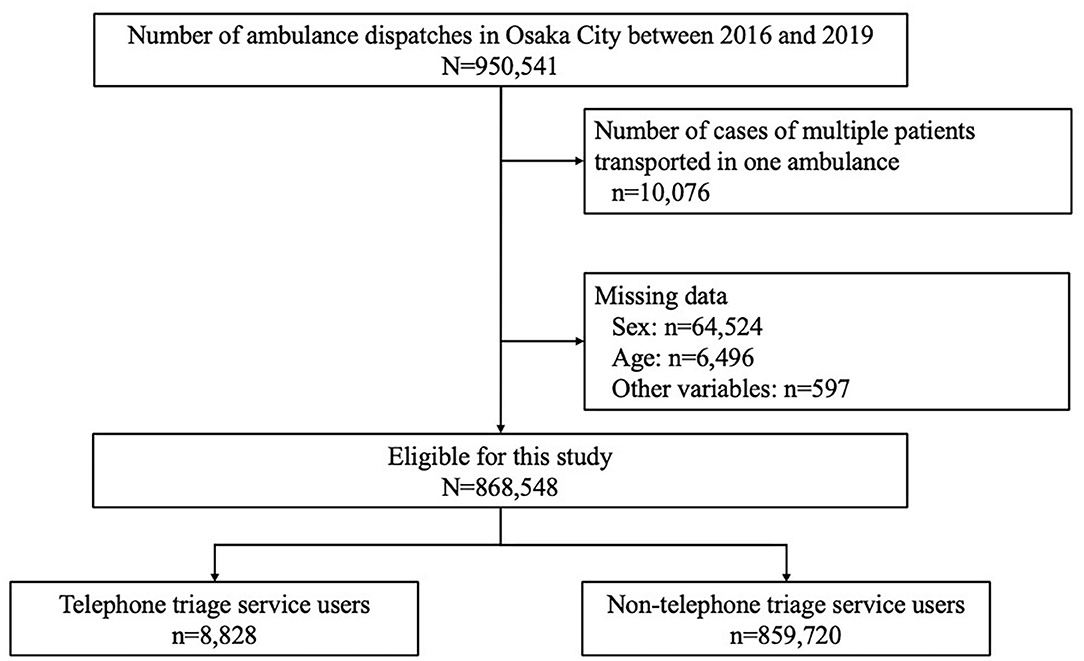 Figure 1. Patient flow in this study.

Table 1 shows the characteristics of the cases before and after PS matching. In all cohort before the PS matching, patients using the telephone triage service were younger, more likely to call for an ambulance due to “acute disease,” and less likely to call for an ambulance due to “traffic accident by car” and “other injury.” Regarding location of occurrence, the proportion of “home” was high, followed by that of “public space” and “road, highway and railroad” in cases using the telephone triage service. In the PS matched cohort, 8,828 cases were selected from each group, and the balances of all covariates improved between the two groups after PS matching. The area under the curve in the logistic regression model for PS calculation was 0.808.

Table 1. Patient characteristics among all cohorts and the propensity score-matched cohort.

Table 2. Unnecessary ambulance use with or without telephone triage service.

Table 3. Unnecessary ambulance use with or without telephone triage service among children.

Table 4. Unnecessary ambulance use with or without telephone triage service among adults.

Table 5. Unnecessary ambulance use with or without telephone triage service among the elderly.

In recent years, infrastructures of centralized personal health records (PHR) are being built using blockchain technology (32). If such a PHR infrastructure can be built and used for telephone triage, it would lead to the realization of tailor-made telephone triage service based on patient's factors such as past medical history and medication history. In addition, it may also be possible to evaluate the outcome of cases in which patients are not urgent and visit a clinic on their own without ambulance transport as a result of telephone triage, as well as to track long-term prognosis such as return to work after rehabilitation. Thus, as the PHR infrastructure is built up, there will be scope for further enhancement of the telephone triage service in the future.

This study has some limitations. First, we did not assess the patient's family structure or the relationship between the patient and the person who called for an ambulance, such as a family member, colleague, or bystander. Second, we did not assess the impact of using the telephone triage service on patient outcomes. We are currently studying this and will publish our findings in the future. Third, the outcomes were unknown in the cases for which an ambulance was not dispatched as a result of telephone triage. In addition, this study did not include a detailed cost analysis, but we plan to evaluate quality-adjusted life years and incremental cost-effectiveness ratios. Finally, as this is an observational study, there may be unknown confounding factors.

In observational studies, bias of background factors is a problem when comparing outcomes between groups, and this study made an effort to minimize those biases as much as possible by using the statistical analysis with PS. As a result, we found that the use of the telephone triage service in Osaka city reduced unnecessary ambulance use, especially among adults and the elderly in this study.

The data analyzed in this study is subject to the following licenses/restrictions: The data that support the findings of this study are available from the OMFD but restrictions apply to the availability of these data, which were used under the personal information protection ordinance of Osaka City, and so are not publicly available. Requests to access these datasets should be directed to Osaka Municipal Fire Department (in Japanese) https://www.city.osaka.lg.jp/shobo/page/0000052526.html.

This study was approved by the Ethics Committees of the Osaka Graduate School of Medicine (Approval No: 16070). The requirement to obtain patient consent to participate was waived because the data were anonymized.

This study was supported by the Fire and Disaster Prevention Technologies Program (Grant No: JPJ000255).

The authors are greatly indebted to the Osaka Municipal Fire Department and the Fire and Disaster Management Agency. This article was supported by the Clinical Investigator's Research Project of the Osaka University Graduate School of Medicine.

Copyright © 2022 Katayama, Kitamura, Nakao, Himura, Deguchi, Tai, Tsujino, Mizobata, Shimazu and Nakagawa. This is an open-access article distributed under the terms of the Creative Commons Attribution License (CC BY). The use, distribution or reproduction in other forums is permitted, provided the original author(s) and the copyright owner(s) are credited and that the original publication in this journal is cited, in accordance with accepted academic practice. No use, distribution or reproduction is permitted which does not comply with these terms.