Hyperarid climate and salty lakes prevail in the current Qaidam Basin, but this basin was once a large paleolake until the early Quaternary. However, its evolution history and relationship with climate and tectonics are still elusive. Here we present detailed stratigraphic descriptions combined with total organic carbon content and weight ratio of organic carbon to total nitrogen records from fluvio-lacustrine sediments in the western Qaidam Basin to infer how the lake evolved during the late Pliocene-early Pleistocene. These data reveal a drying trend since 3.3 Ma, which we attribute to low latitude forcing and/or local tectonic activities. However, this trend was interrupted during 2.84–2.48 Ma, in which climate wetting was observed. We attribute the climate wetting during 2.84–2.48 Ma to intensified East Asian summer monsoon as is documented by the Chinese Loess Plateau records. Halite and gypsum content increased dramatically after 2.5 Ma, indicating the formation of salty lake in the western Qaidam Basin. These data improve our understanding of the detailed processes of Qaidam aridification and its potential forcing mechanisms.

The Qaidam Basin (QB), with an area of ∼80,000 km2 and an average elevation of ∼2.7 km above sea level, is the largest internally drained basin on the northeastern Tibetan Plateau (Fang et al., 2007). A hyperarid climate prevails with mean annual precipitation <50 mm and evaporation >1,000 mm in this basin (Wu et al., 2011; Cai et al., 2012; Wang et al., 2013). The basin is largely covered by dry salt playas, with only minor desert vegetation and hypersaline lakes (Wang et al., 2012). However, previous studies suggest that a huge Qaidam paleolake might have existed during the Eocene (Wang et al., 2006; Yin et al., 2008a, Yin et al., 2008b; Zhang et al., 2018; Liang et al., 2021), which expanded from the Oligocene to the Miocene (Yang, 1986; Wu and Xue, 1993), and broke into several small lakes likely during the Quaternary (Han et al., 2014; Lu et al., 2015). However, due to the scarcity of continuously dated sediment records (Lu et al., 2015; Fang et al., 2016), how the Qaidam paleolake evolved into its hyperarid condition remains relatively unknown. Furthermore, lack of such records prevents understanding the underlying forcing mechanisms for Qaidam drying and central Asian aridification. 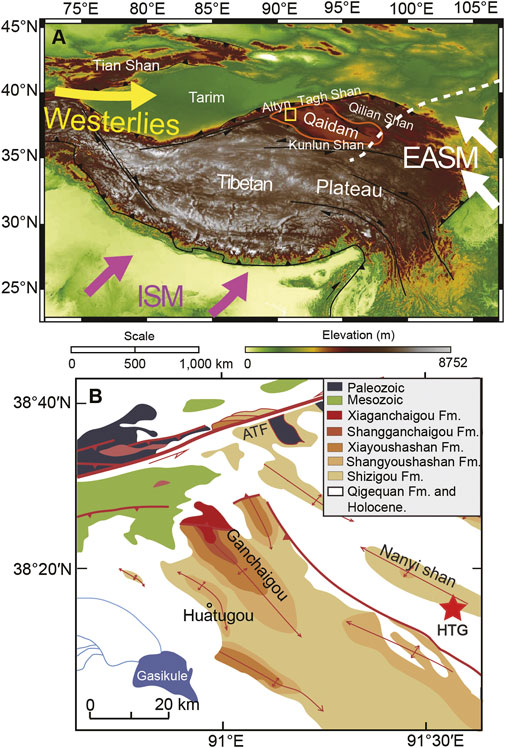 The studied HTG section lies on the southern flank of the Nanyi Shan (Figure 1B). The 476-m sedimentary strata consist of evaporite, shale, siltstone, sandstone, and rare conglomerate corresponding to the fluvio-lacustrine sediment of the Shizigou Fm., and Qigequan Fm. (Luo et al., 2018). The age model of HTG section is ∼3.9–2.1 Ma based on paleomagnetic dating by Luo et al. (2018). Milankovitch cycles are detected in the magnetic susceptibility record (Su et al., 2019a), demonstrating the validity of the paleomagnetic age model.

For TOC analysis, a total of 298 crushed bulk samples (40–50 mg ea.) were reacted with 3 mol/L HCl to remove carbonates before being wrapped in tin capsules. The wrapped samples were then heated to 1,800°C in a flow of oxygen using a Vario EL Cube elemental analyser (Elementar Analysensysteme, Germany). The combustion of the sample and absorption of the released CO2 were performed in the automated mode. The mass content of carbon in the sample was calculated using the proprietary software provided by the device manufacturer. For each set of analyses, calibration was performed against acetanilide.

Lithofacies of the Huatugou Section 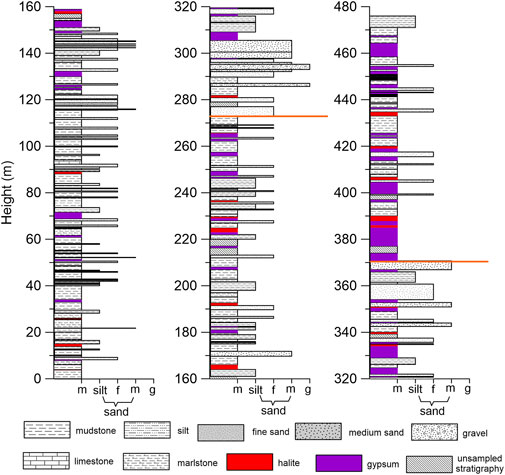 FIGURE 2. Stratigraphic column of the Huatugou section in the western Qaidam Basin. The 476-m strata were subdivided into three units (Units 1–3) based on lithofacies associations and depositional environments.

Unit 1 is characterized by massive mudstone interbedded with fine grained sandstone beds. The evaporite layers started to appear at the base of the section (halite layer at 3.8 m and gypsum layer at 7.9 m). Evaporite layers in Unit 1 are least frequently observed of the entire sequence. Unit 1 is interpreted as littoral to sublittoral lacustrine sedimentation in an internally drained, playa environment (Pietras and Carroll, 2006). We note that fluvial layers are less frequent for the upper portion of this unit (ca. 150–273 m), and this portion is dominated by playa-lacustrine.

Unit 2 is dominated by fine-medium grained sandstone beds with more frequent occurrences of evaporite layers (gypsum and halite) than Unit 1, approximately every 2.4 m. Unit 2 is interpreted as a sand flat and perennial shallow lacustrine environment (Gierlowski-Kordesch and Rust, 1994). The overall increase in grain-size and appearance of medium sandstone beds suggest an increase in sediment-input from fluvial erosion.

Unit 3 is dominated by massive mudstone with interbedded halite and gypsum beds. This unit has the highest frequency of evaporite beds, occurring every 2.1 m, which implies either regular times of hyper-concentrated brine within the lake or frequent desiccation. 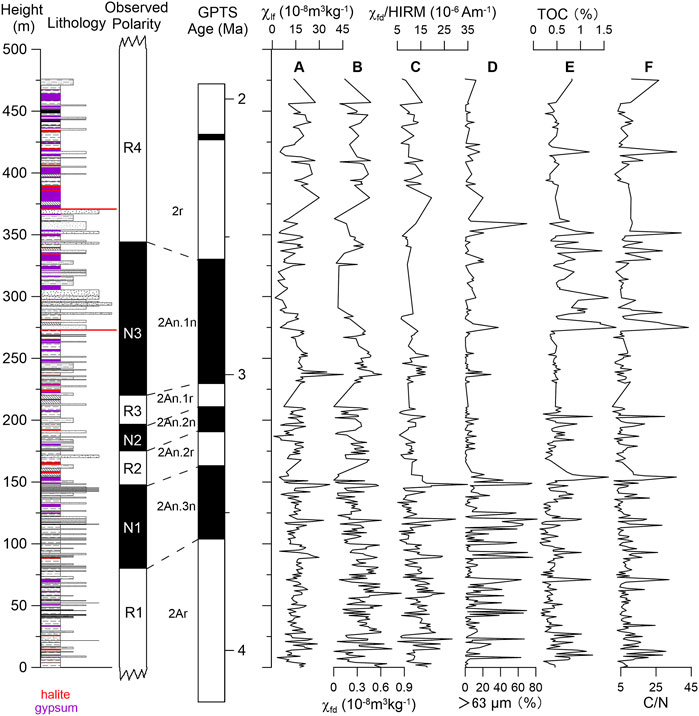 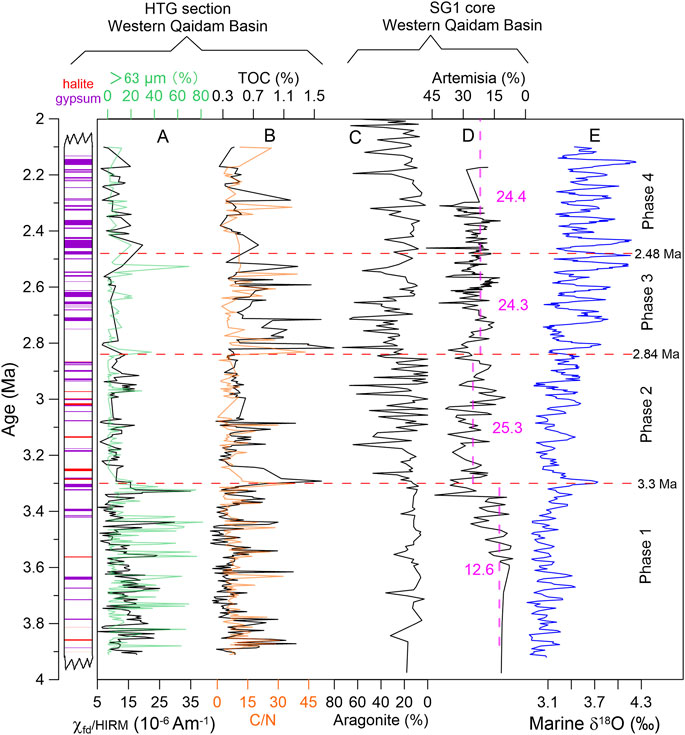 C/N ration is a useful proxy to distinguish different carbon sources in lacustrine sediments (Talbot and Lærdal, 2000). C/N ratios of aquatic vegetation are generally between 4 and 10, whereas C/N ratios of terrestrial plants are generally greater than 20 (Talbot and Lærdal, 2000). The C/N ratio values in Phase 1 and Phase 3 are frequently greater than 20, suggesting that organic matter in those intervals was mainly derived from terrestrial plants transported by rivers. 83% of C/N ratio values in Phase 2 and Phase 4 are below 10, suggesting a low lake productivity and lack of terrestrial derived organic matter. One may question whether high C/N ratios in the study site are aligned with large grain size and fluvial transport, so that this ratio can not be used to infer terrestrial derived organic matter. However, few large grain size intervals (corresponding to fluvial input) correspond to higher than 20 C/N ratio, suggesting that higher than 20 C/N ratios correspond to lacustrine setting. Following this observation, we interpret the intervals with higher TOC and C/N ratio during Phases 1 and 3 as climate wetting.

The lithofacies, TOC and C/N ratio records from the HTG section suggest an open lake and a regularly wetting climate before 3.3 Ma (Phase 1, Figure 4). This inference is consistent with grain size and χfd/HIRM records from the Qaidam Basin (Figure 4, Su et al., 2019b). We interpret that during a wetting climate, terrestrial plants flourished in the surrounding regions, resulting in more terrestrial organic matter being transported to the depositional region.

The TOC and C/N ratio records from HTG section suggest the Qaidam paleolake changed from an open lake to closed, salty lake at ∼3.3 Ma (Figure 4). Previous studies from the Qaidam Basin consistently suggest a phase of drying at ∼3.3 Ma (Heermance et al., 2016; Fang et al., 2016; Su et al., 2019b). For example, in the Northeast Qaidam Basin, a change from wetter fluvial/overbank strata to playa-lacustrine and evaporite strata occurred around 3.3 Ma (Heermance et al., 2016). A drying climate is observed in the western Qaidam Basin as is recorded by mineral composition records suggesting a brackish lake with higher Mg/Ca and higher salinity after 3.3 Ma (Fang et al., 2016). Moreover, our χfd/HIRM and grain size data from the HTG section in northwestern Qaidam Basin reveal a phase of drying in the Qaidam Basin at ∼3.3 Ma (Su et al., 2019b; Figure 4). Coupled with previous studies from the western Qaidam Basin, we interpret the hydrological transformation at ∼3.3 Ma as a result of intensified aridity (Phase 2; Figure 4). Pliocene tectonic uplift in the study region can be one forcing for the observed drying (Lu et al., 2015). Alternatively, closure of the Indonesian Seaway and associated sea surface temperature (SST) decrease of the Indian Ocean is another or additional potential way to explain central Asian drying at ∼3.3 Ma (Su et al., 2019b).

Interestingly, superimposed on the long-term drying trend, a wetting climate in the Qaidam Basin occurred between 2.84 and 2.48 Ma (Figure 4). Sedimentological evidence from the same site also indicates regular occurrences of fluvial system and wetter conditions between 2.84 and 2.48 Ma. Previous studies demonstrate a stepwise drying of central Asia since the Pliocene (Fang et al., 2008; Han et al., 2014; Lu et al., 2015). However, superimposed on the long-term drying trend, a phase of undetected climate wetting did occur in the Qaidam Basin during 2.84–2.48 Ma. This wetting is not unique to this site. For example, averaged artemisia content decreased from 25.3% in Phase 2 to 24.3% in Phase 3 (Figure 4, Koutsodendri et al., 2019), suggesting climate wetting. Interestingly, aragonite content increased from Phase 2 to Phase 3 (Figure 4, Fang et al., 2016), different from the artemisia content variations. We argue that biological proxies may better reflect regional climate than evaporite mineral content. Therefore, we chose to use the biological data.

Global climate was experiencing a cooling trend since 3.6 Ma (Lisiecki and Raymo, 2005), so it is hard to attribute the observed intensified precipitation in the study site during 2.84–2.48 Ma to global forcing. Previous research suggests that stronger East Asian summer monsoon (EASM) precipitation likely penetrated further inland, which could bring more moisture to this inland basin (Liu and Ding, 1998). The magnetic susceptibility records from the Chinese Loess Plateau indicates an intensified Asian summer monsoon during this interval (An et al., 2001; Nie et al., 2014). Thus, we attribute the late Pliocene wetting of the Qaidam Basin to enhancing EASM. Alternatively, increased moisture input from westerly source is another possibility. However, evidence for westerly moisture input increase at this time interval is lacking.

We report new, multiple-proxy records of the western Qaidam Basin lake evolution. These records reveal four phases evolution of the western Qaidam paleolake, with boundaries at ∼3.3, ∼2.84, and ∼2.48 Ma. The data reveal that the Qaidam paleolake change from an open lake to a closed and salty lake at ∼3.3 Ma, likely in response to decreased precipitation from the low latitudes and/or local tectonic uplift. Interestingly, superimposed on the long-term drying trend, a phase of wetting climate was observed in the TOC records in the Qaidam Basin during 2.84–2.48 Ma, which we suggest linked to enhancing East Asian summer monsoon. Halite and gypsum content increased dramatically after 2.5 Ma, indicating the formation of salty lake in the western Qaidam Basin, which may be in response to intensive Northern Hemisphere glaciation and decreased sea surface evaporation. These data improve our understanding of the detailed processes of Qaidam aridification and its potential forcing mechanisms.

LG and JN designed the experiment; QS and LG analyzed the data; QS and JN wrote the paper with the help of all authors; HR, LG, and RH participated in the discussion and modification.

Thanks to Shunchuan Ji, Wenhan Chen, and Rui Zhang for their field assistance.

The Supplementary Material for this article can be found online at: https://www.frontiersin.org/articles/10.3389/feart.2021.736901/full#supplementary-material

Copyright © 2021 Su, Riegel, Gong, Heermance and Nie. This is an open-access article distributed under the terms of the Creative Commons Attribution License (CC BY). The use, distribution or reproduction in other forums is permitted, provided the original author(s) and the copyright owner(s) are credited and that the original publication in this journal is cited, in accordance with accepted academic practice. No use, distribution or reproduction is permitted which does not comply with these terms.

Lake Records of Environmental and Climate Change on the Tibetan Plateau