Colorectal cancer (CRC) is the fourth leading cause of cancer mortality in developed countries (1). Approximately 50% of those diagnosed will die from their cancer or some other comorbid disease (2). In a similar pattern to other solid organ tumors, disease progression is associated with a progressive nutritional and functional decline resulting in poor response to treatment and poor survival (3, 4).

There is evidence to a direct association between the magnitude of the systemic inflammatory response, as evidenced by systemic inflammation-based scores, such as the modified Glasgow Prognostic Score (mGPS), the neutrophil lymphocyte ratio (NLR), low–SMI, and low–skeletal muscle density (SMD) in patients with CRC (13, 17–19). However, whether these relationships are causal or merely associative is not known because only a few longitudinal and interventional studies have been published to date.

Therefore, the aim of the present longitudinal study was to delineate the relationship between longitudinal changes in CT-derived body composition, clinicopathological characteristics, and the systemic inflammatory response in patients with colorectal cancer.

Consecutive patients who underwent elective, potentially curative resections for CRC in an enhanced recovery pathway between March 2008 and June 2018 at a single center were identified from a prospectively maintained database. Patients with a preoperative scan with or without follow-up CT scans and a recorded height and weight were included in the study (Figure 1). 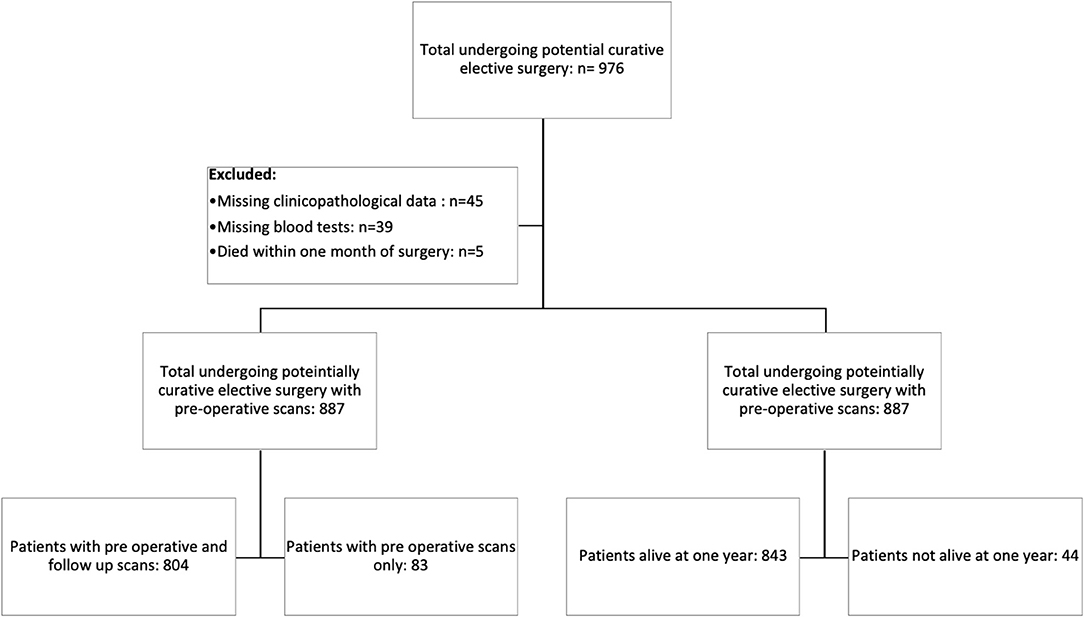 Figure 1. Prisma diagram of patients excluded from the study due to missing clinicopathological data, blood tests, or death within 1 month of surgery. Further subdivisions showing the number of patients with follow-up scans at 1 year and patients alive at 1 year.

The patients were classified according to body mass index (BMI) as underweight/normal weight (BMI < 24.9) and overweight/obese (BMI ≥ 25.0). All tumors were staged according to TNM fifth edition (20). Preoperative hematological and biochemical markers were recorded.

The cause and date of death were confirmed with the Registrar General (Scotland) until June 1, 2018, which served as the censor date. Informed consent was obtained from patients prior to surgery. Those with metastatic CRC and those who underwent emergency surgery or palliative surgery were excluded from the study. Ethical approval was granted by the West of Scotland Research Ethics Committee, Glasgow, United Kingdom.

Pre-operative and initial follow-up CT images were obtained at the level of the third lumbar vertebra as previously described (17) as part of their routine clinical follow-up. The median time from pre-operative scan to follow-up scan was 12 months (9–18 months). Scans with a significant movement artifact or a missing region of interest (ROI) were excluded from the study. Each image was analyzed using a free-ware program (NIH Image J version 1.47, http://rsbweb.nih.gov/ij/).

The SMI (Dolan) and the SMD (Dolan) gender-adjusted thresholds were derived using receiver–operating characteristic curve analysis to determine thresholds associated with overall survival in this population. This was conducted using validated online biomarker cutoff optimization software (21). This resulted in SMI (Dolan) being defined as an SMI <51.2 cm2/m2 in male patients and SMI <41.9 cm2/m2 in female patients. This resulted in SMD (Dolan) being defined as <34.1 HU in males and <34.4 HU in females. Previously published thresholds were used for visceral obesity (visceral fat area [VFA] >160 cm2 for male patients and >80 cm2 for female patients (13, 22). These thresholds were similar but not identical to those published by Doyle et al. (23). A high SFI was defined as ≥50.0 cm2m2 in males and ≥42.0 cm2m2 in females (6).

An autoanalyzer was used to measure serum CRP (mg/L) and albumin (g/L) concentrations (Architect; Abbot Diagnostics, Maidenhead, United Kingdom). The mGPS and NLR were derived as previously described (24). The magnitude of the post-operative systemic inflammatory response was measured using the post-operative Day 4 C-reactive protein (CRP; <150 or >150 mg/L) (25, 26). The BMI measurements and blood tests were not routinely carried out on follow-up. 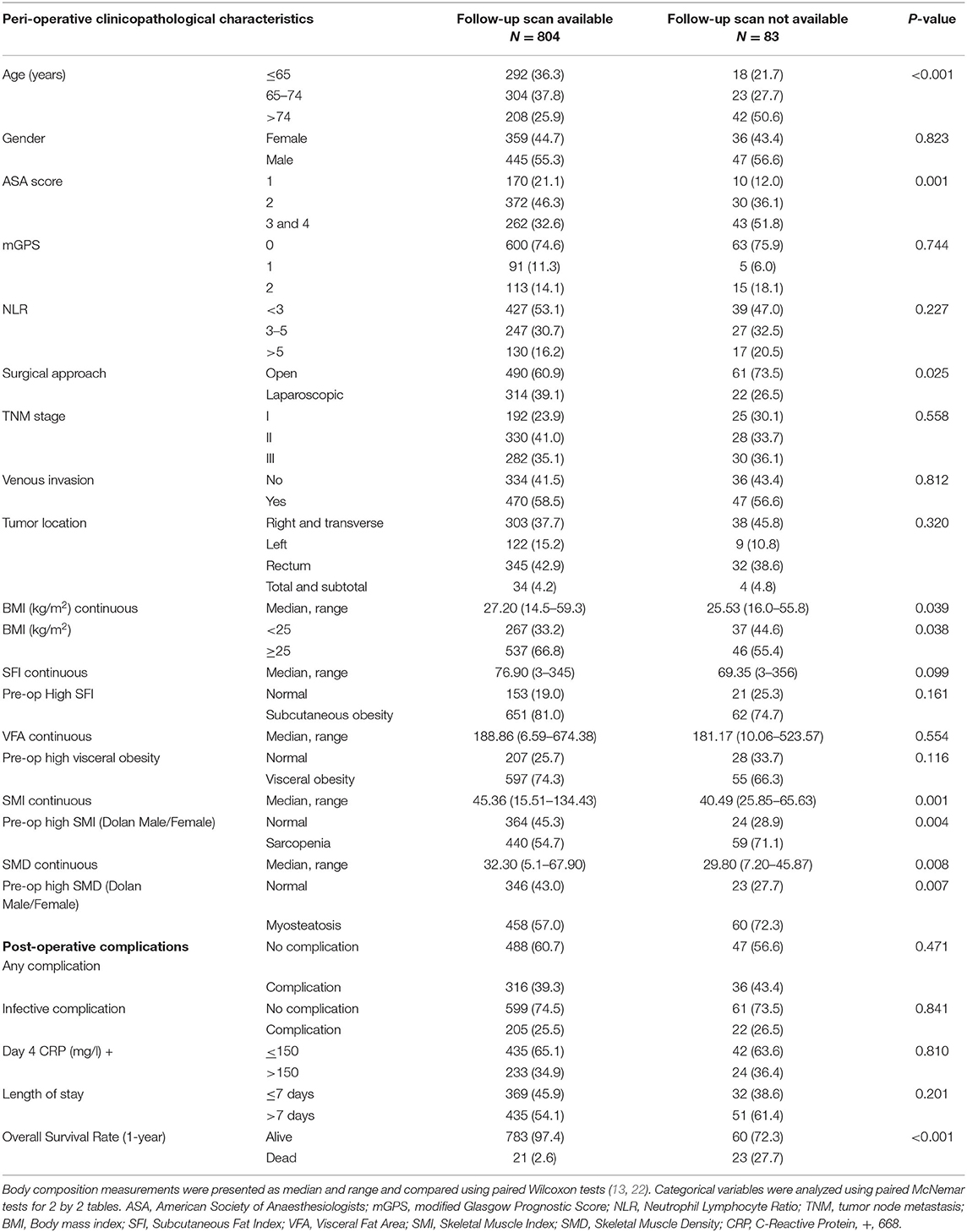 Table 1. Clinicopathological characteristics of patients undergoing potentially curative resection for colorectal cancer with and without follow-up scans at 1 year.

When the change in SMD was taken as a continuous variable, there was no significant decrease in the median level of −0.66 HU (-34.99 HU to +27.30 HU, p = 0.062) such that there was no significant increase in the number of patients with a high SMD (43 vs. 41%, p = 0.280). On Cox regression when taken as a categorical variable, an increase in SMD was associated with a better overall survival (p < 0.01). On Cox regression when censored for all cases with <1 year of follow up after the second CT, no measurement of SMD was associated with an improved overall survival.

When linear regression analysis was carried out for the change in SMI against baseline clinicopathological characteristics, including age, gender, BMI, ASA, mGPS, NLR, TNM stage, and venous-invasion only mGPS (r = 0.658, p = 0.042) and NLR (r = 0.524, p = 0.084) were significantly associated with the change in SMI (Table 3).

Given the almost universal prognostic value of pre-treatment CT-based measurements of sarcopenia (low SMI), there is a considerable interest in therapeutic targeting of SMI. However, to date, a few longitudinal studies have been carried out to test this relationship. The results of the present longitudinal study showed that in 47 (5.8%) patients there was a reduction in SMI and in 114 (14.2%) patients there was an increase in SMI. Therefore, only ~20% of the patients showed changes in their SMI (n = 161) and even a lesser number of patients showed relative changes of 10% or more (see Figures 4–7). In the largest longitudinal study to date, Brown and co-workers carried out such analysis using two standard deviations from the mean change as an indication of a significant loss or gain of SMI and related this to survival (29). The loss of SMI (but not the gain of SMI) was significantly associated with survival and applied to a small proportion of the population studied (~7%) and therefore the clinical value of longitudinal CT-derived body composition analysis in patients undergoing surgery for primary CRC would appear limited. 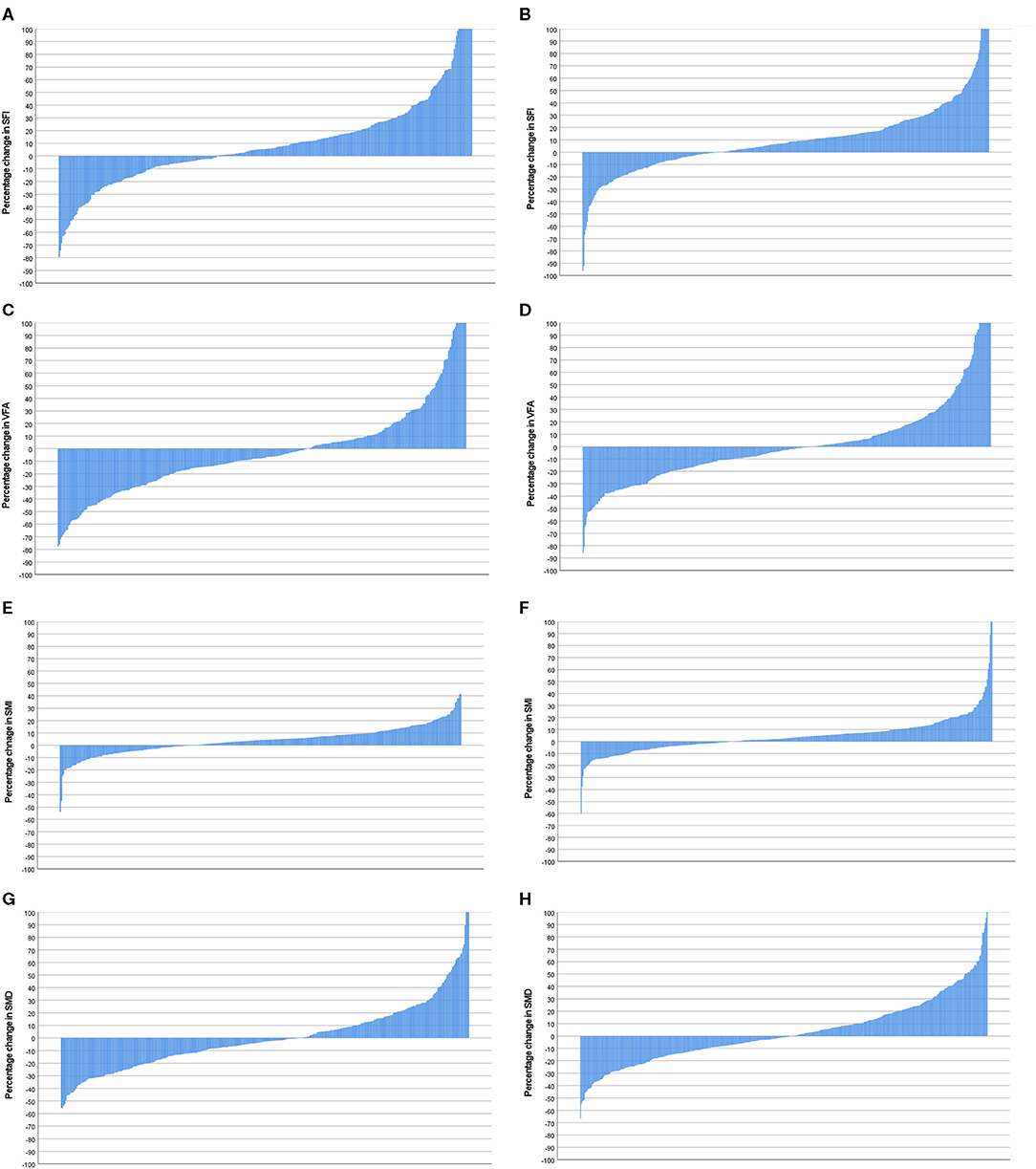 These observations have a number of implications. First, they would suggest that, since SMI is relatively stable over at least 12 months (Table 2, see Figures 4–7), the majority of losses in SMI occur before the diagnosis and therefore are likely to be largely constitutional (i.e., the die is cast at an early stage in the cancer journey) rather than as a result of cancer itself. Moreover, as a result, it is likely that most of the prognostic values can be derived from the initial body composition measurements compared with the follow-up measurements in primary operable colorectal cancer. Second, the consistent association, in both cross-sectional (15) and now in longitudinal studies between a low SMI and the mGPS may suggest a causal relationship. If these were causally linked, then it might be expected that changes in SMI status would be associated with changes in systemic inflammatory status. Although there is abundant evidence that the systemic inflammatory response is associated with profound catabolism of skeletal muscle and may also block anabolism, a few studies have attempted to target directly the systemic inflammatory response and monitor skeletal muscle mass in patients with either primary operable cancer or in advanced inoperable cancer (15).

On linear regression analysis against baseline clinicopathological characteristic only mGPS (r = 0.658, p = 0.042) and NLR (r = 0.524, p = 0.084) were significantly associated with a change in SMI. This is consistent with the cross-sectional studies that have shown a consistent association between the systemic inflammatory response and SMI in patients with cancer (15).

In a recent paper, Martin et al. published age- and gender-specific thresholds for patients undergoing surgery for CRC (n = 2,100). When similar stratification was applied to the present cohort, the results for skeletal muscle volume and radiodensity were comparable despite that there was more advanced disease in the combined Canadian and UK cohorts. However, in the present cohort, there was a greater level of both visceral and subcutaneous fat. This is perhaps not surprising given the deprivation levels of patients referred to Glasgow Royal Infirmary. Indeed, in Glasgow, 190,000 or just under 32% of the city's population resides in the 10% of the most deprived areas of the United Kingdom (the so-called “Glasgow effect”). This is associated with a poor-quality diet, low physical fitness, and high levels of alcohol consumption and smoking, which would have a direct effect on adiposity and comorbidity.

With reference to delineating the relationship between longitudinal changes in CT-derived body composition, clinicopathological characteristics, and the systemic inflammatory response, it may have been better to examine these relationships in patients with advanced cancer since the rate of loss of body tissue is likely to be higher. However, such longitudinal studies are few. For example, McMillan and co-workers reported that in a longitudinal study of 18 male patients- with advanced cancer, those with an elevated CRP concentration lost body cell mass (using a total body potassium counter) at a higher rate (31). Wallengren et al. reported that, in a longitudinal study of 471 patients with advanced cancer, those patients with an elevated CRP concentration had less muscle mass (using dual energy X-ray absorptiometry) on study entry and lost muscle mass at an accelerated rate during follow-up, particularly in males (32). More recently, Huang et al. (33) reported that, in 139 patients with advanced ovarian cancer, there was an average SMI loss of 2% over 6 months and was significantly associated with the mGPS (33). Moreover, pre-treatment SMI and SMI change were independently associated with overall survival. Taken together the present and previous results indicate that both SMI and the mGPS are clinically useful measurements during the treatment of patients with cancer.

The limitations of the present study include its retrospective nature and those only patients with an electronically available CT scan were included in the analysis. Moreover, not all patients had follow-up CT scans at ~12 months and those patients who did not have a follow-up CT scan were older, had a higher ASA, had a lower BMI, lower SMI, lower SMD, and higher mortality. Finally, in those patients with follow-up scans, the median follow-up was <36 months (30.1 months), and therefore only 1-year survival rates were commented on. However, the study population was relatively large, most patients had follow-up scans and were well-documented in terms of clinicopathological characteristics, body composition, and measures of the systemic inflammatory response.

The present longitudinal study provides further evidence that low–skeletal muscle mass is associated with the presence of a systemic inflammatory response and new evidence that this relationship is established early in the disease course, maintained following resection of the primary tumor in patients with colorectal cancer. Intervention studies are required to establish whether the relationship between low–skeletal muscle mass and the systemic inflammatory response is causal in nature.

The raw data supporting the conclusions of this article will be made available by the authors upon request, without undue reservation.

The studies involving human participants were reviewed and approved by Ethical approval was granted by the West of Scotland Research Ethics Committee, Glasgow. All research was performed in accordance with the Declaration of Helsinki. Consent for inclusion within clinical research is take at the time of resection. Written informed consent for participation was not required for this study in accordance with the national legislation and the institutional requirements.

This research was funded by the University of Glasgow and the NHS Endowment Fund.

The authors thank Douglas H Black for his assistance in training and validation of CT-derived body composition.

Copyright © 2021 Dolan, Abbass, Sim, Almasaudi, Dieu, Horgan, McSorley and McMillan. This is an open-access article distributed under the terms of the Creative Commons Attribution License (CC BY). The use, distribution or reproduction in other forums is permitted, provided the original author(s) and the copyright owner(s) are credited and that the original publication in this journal is cited, in accordance with accepted academic practice. No use, distribution or reproduction is permitted which does not comply with these terms.

Inflammatory Basis of Nutritional Deterioration and Cachexia in Cancer