Faculty of Food Technology and Biotechnology, University of Zagreb, Croatia

Intake of Dietary Fiber From Grains and the Risk of Hypertension in Late Midlife Women: Results From the SWAN Study

Patients with hypertension tend to experience headaches, dizziness, and other symptoms for decades, and the damage caused by hypertension to the cardiovascular system is continuous and aggravating (1, 2). High blood pressure that is not well-controlled contributes significantly to an increased risk of serious diseases, such as myocardial infarction, ischemic and hemorrhagic stroke, aortic dissection or aneurysm, chronic kidney disease, and peripheral artery disease (3). There are many risk factors that are known to be associated with hypertension, such as age, heredity, environment, and lifestyle (4). Unhealthy lifestyles, including a high-salt diet, lack of exercise, fatigue, and high pressure from work and other areas of life, are the most important modifiable factors for developing hypertension (5). Using antihypertensive drugs can alleviate damage to target organs by hypertension and prevent adverse cardiovascular events. However, many individuals are either not aware of their blood pressure condition or are not aware of their true blood pressure values due to inadequate or discontinued antihypertensive treatment. Furthermore, although there are vast options for antihypertensive drugs, some patients with hypertension have difficulty controlling their blood pressure within the normal range by using current drugs, motivating further research in this field. Thus, early prevention of the formation of hypertension is still particularly important at present.

Importantly, the positive effects of dietary fiber supplementation on cardiovascular protection have been recognized for a few years (6–11). Some investigations on the role of dietary fiber intake in patients with hypertension have also been reported. For instance, one previous study reported an association of fiber intake with the prevention of cardiovascular disease, including hypertension (6). Oat, a fiber-rich food, has also been found to have beneficial effects on controlling blood pressure among patients with hypertension (7). However, studies on the exact relationship between dietary fiber intake and hypertension risk are few, and it has been studied inadequately (6). Lifestyle and eating habits in the middle-aged population tend to cause people to be at high risk of hypertension.

To analyze the baseline data from the SWAN study, a longitudinal, multicenter, and population-based study of the natural history of late midlife women was performed. Between 1995 and 1997, a telephone screening interview was used to determine the eligibility of an individual for the study cohort. Participants from community-based samples were collected at seven collection points across the United States using various sampling frames and recruitment strategies. In summary, 16,065 women completed the telephone screening interview, and only 3,302 (20.6%) women were recruited to the SWAN cohort at baseline. Women who met the inclusion criteria were as follows: (1) had a range of ages from 42 to 53 years; (2) had not used reproductive hormones in the previous 3 months; and (3) had an intact uterus and at least one intact ovary. The institutional review boards at all the sites approved the study protocol, and all included individuals at each site gave informed consent. The SWAN study contained detailed information regarding demographic characteristics, lifestyle, self-reported health, health examination, and medical history. For research purposes, 783 women were excluded due to missing information. A total of 2,519 women were included in this study. The exclusion criteria are described in detail in Figure 1. 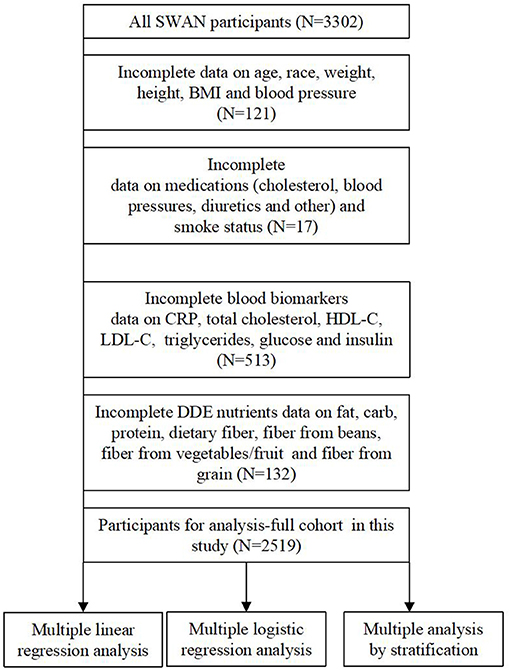 Measurement and Calculation of Blood Pressure

The measurement of blood pressure in all the included subjects was carried out according to a standardized protocol (12). Subjects did not consume caffeinated beverages or smoke for at least 30 min before measuring blood pressure. The measurements were performed with readings taken on the right arm, with the participant seated and feet flat on the floor for at least 5 min before measuring blood pressure (12). A standard mercury sphygmomanometer was used to record systolic blood pressure (SBP) and diastolic blood pressure (DBP) at the first and the fifth phase Korotkoff sounds. The average of two sequential blood pressure values, with a minimum of a 2-min rest period between measures, was recorded. Using the average of these two sequential blood pressure values, the mean SBP and DBP were calculated (13). For our research purposes, DBP ≥ 90 mmHg was defined as diastolic hypertension, and SBP ≥ 140 mmHg was defined as systolic hypertension (13). 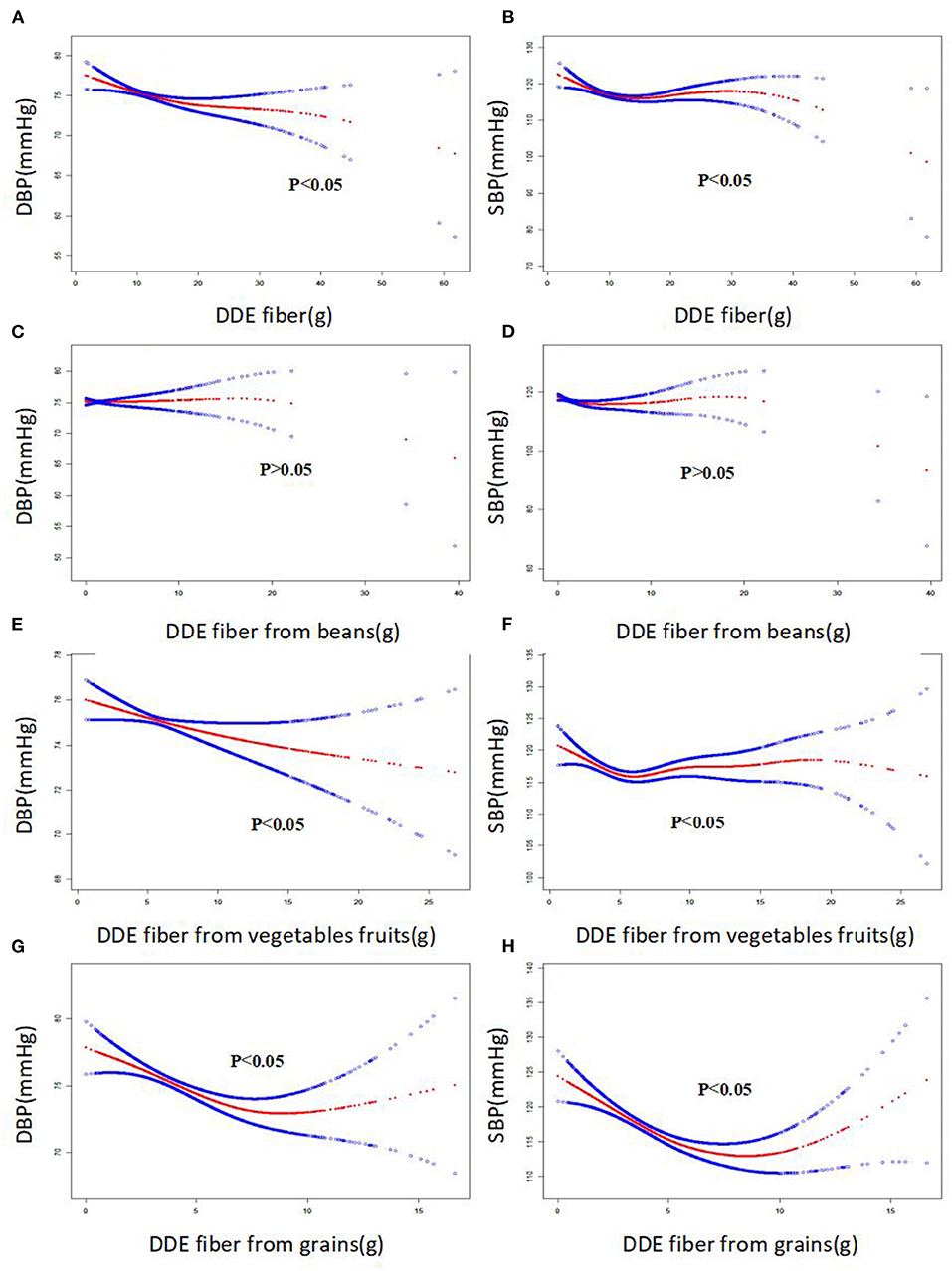 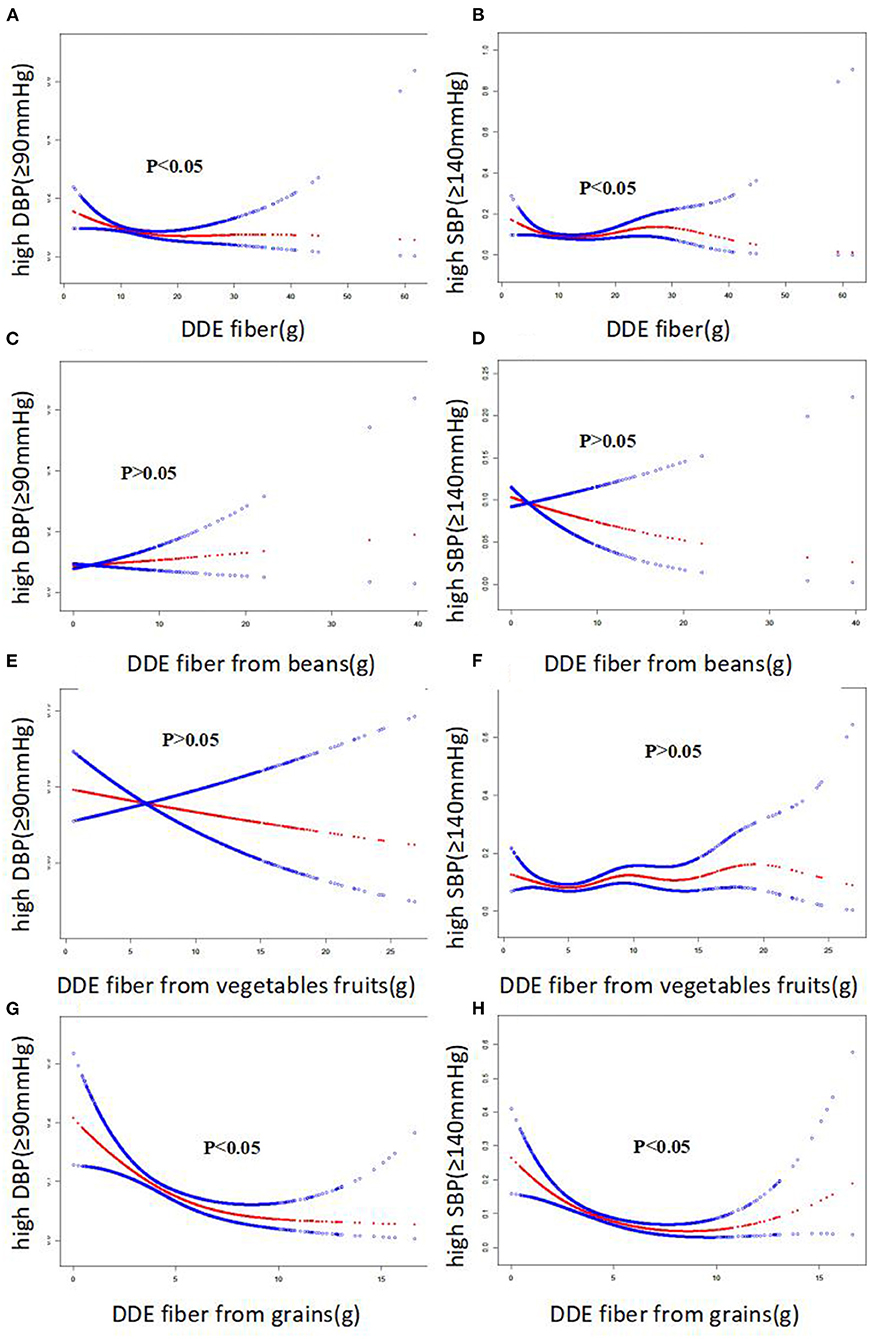 Figure 3. The smooth curve of the associations between dietary fiber intake and risk of systolic and diastolic hypertension, respectively. 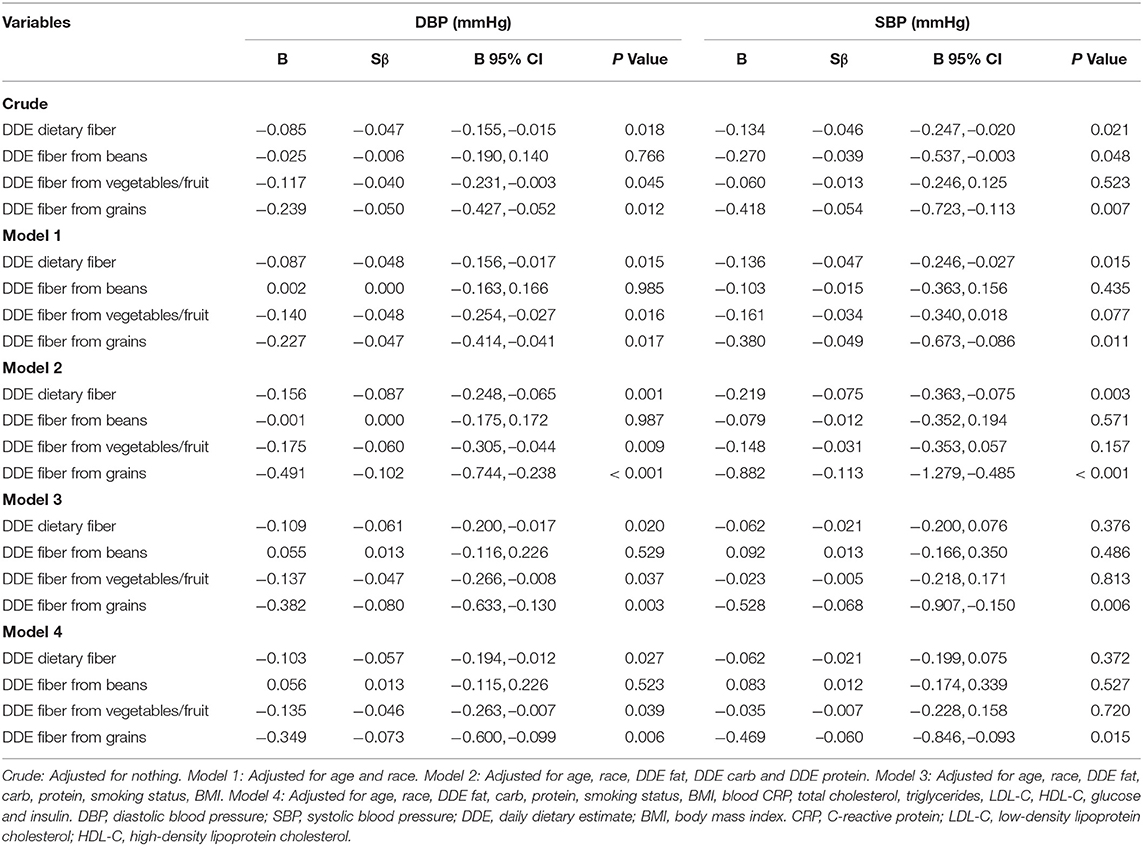 Association Between the Intake of Dietary Fiber and Hypertension Risk 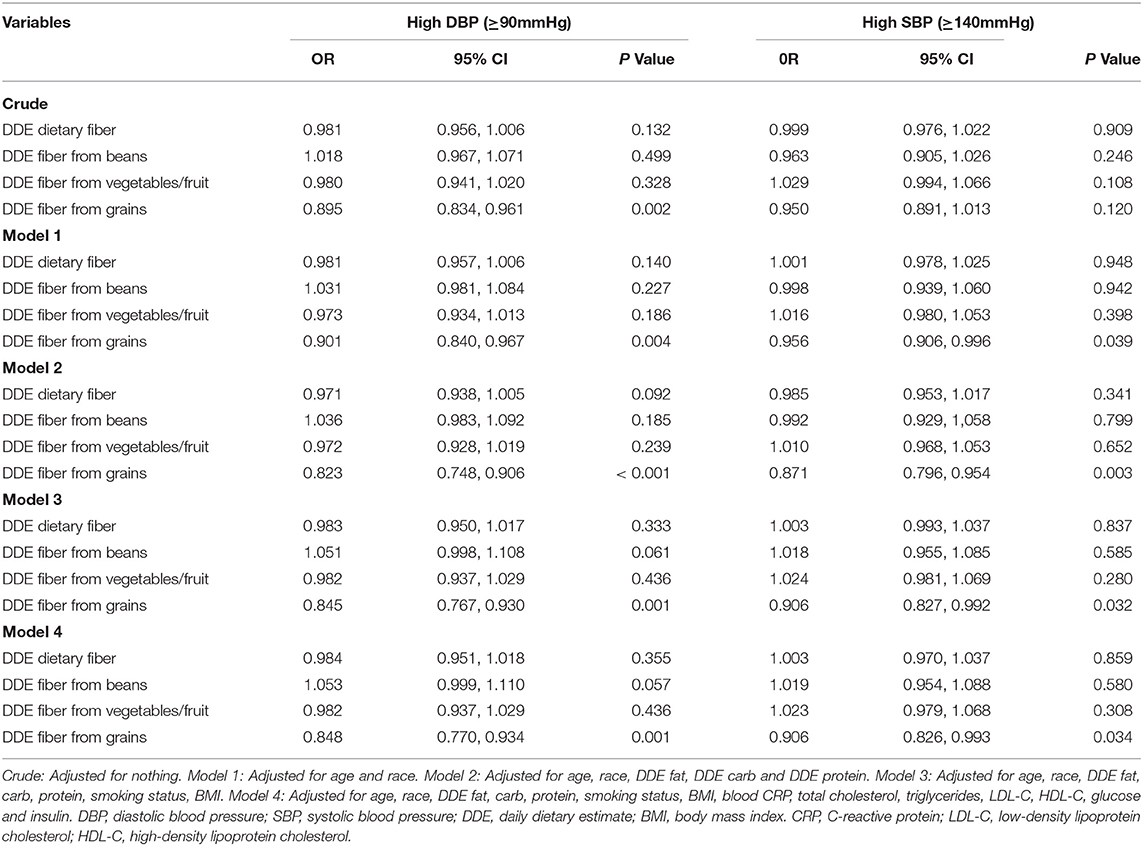 Table 3. Multivariate logistic regression on association of DDE fiber and risk of hypertension.

Stratified Analysis of the Association Between DDE Fiber From Grains and Blood Pressure by Age, Race, BMI, and Smoking Status

Our study included baseline data from SWAN including 2,519 subjects to investigate the correlation between dietary fiber intake and hypertension risk. Our results uncovered that DDE fibers from grains were negatively associated with the risk of hypertension after adjusting for confounders. This is the first study to show that increased intake of DDE fiber from grains may contribute to a reduced risk of hypertension in midlife women.

Dietary fiber intake has great benefits for preventing many chronic diseases, such as cardiovascular diseases and malignant tumors. Studies on the beneficial effect of dietary fiber on blood pressure began to be investigated in experimental animals. For example, previous evidence has suggested that increased intake of certain fibers has beneficial effects on improved blood pressure in rats (19). Obata et al. observed that one type of fiber, the husk of Psyllium seeds, can lower blood pressure in hypertensive rats who were fed a high-salt diet (19). A few years later, Li et al. performed a study on model rats who were fed corn starch, white rice, and rye for 16 weeks. They found that the rye diet lowered SBP significantly after 12 weeks of treatment. This diet also lowered serum levels of triglycerides, LDL cholesterol, and total cholesterol in the animals. They concluded that the intake of dietary fiber could contribute beneficial effects to blood lipids and blood pressure (20). Galisteo et al. also found a similar result in obese rats fed a diet containing 3.5% Plantago ovata for 25 weeks (21). They observed that consumption of a fiber-enriched diet could prevent hypertension, endothelial dysfunction, and obesity in rats. Recently, one study also reported that the short-term intake of cocoa fiber products could lower blood pressure in rats (22).

For the clinical studies, for example, Saltzman and his team investigated the role of oat fiber in hypertension (23). They observed that an oat-rich diet did contribute to a reduction in SBP without changing the levels of DBP (23). In addition, the diet also decreased the levels of blood lipids. Keenan et al. observed that oat cereal supplements could lower the need for improving arterial blood pressure and antihypertensive medication in hypertensive patients (24), and also found beneficial effects of oat fiber in hypertensive patients with grade 1 hypertension. These patients were given soluble oat fiber for 3 months, and this fiber led to a significant decrease in blood pressure (25). Consistent with these previous findings and mechanisms, we found that increased dietary fiber intake, especially DDE fiber from grains, is related to a lower risk of systolic hypertension and diastolic hypertension in midlife women. However, we did not find that increasing the intake of dietary fiber from beans and vegetables/fruit was associated with reduced hypertension risk. Elevated dietary fiber intake from grains contributed to a decreased risk of hypertension. This is a very interesting discovery, and more future studies may be necessary to explain the difference.

Our study has several notable strengths. First, our study results were from the SWAN study, a multicenter and population-based study of the natural history of late midlife women. The SWAN study has high-quality data, including demographic characteristics, lifestyle, self-reported health, health examination, and medical history, with various sampling frames and recruitment strategies. Second, we comprehensively analyzed the relationship between the main sources of dietary fiber (beans, fruits/vegetables, and grains) and blood pressure. In this cross-sectional study, we are the first to find that increased intake of DDE fiber from grains, rather than the intake of DDE fiber from beans and fruits/vegetables, contributed to a reduced risk of hypertension in midlife women from the United States. Third, enough confounding factors, including demographic characteristics and lifestyle, and biochemical indices, were adjusted by multivariable analysis, which ensures the reliability of our results.

Of course, this study also has several limitations. On the one hand, our data did not distinguish between essential hypertension and secondary hypertension. The diagnosis of hypertension was determined by temporary blood pressure measurement at baseline in the SWAN study. The positive effect of dietary fiber on secondary hypertension caused by other diseases may be insignificant. On the other hand, the results of our study are only applicable to midlife women. The effect of dietary fiber on lowering blood pressure in men and different age groups (minors and the elderly) should be further confirmed in the future. In addition, although 3,302 subjects were included in the SWAN study, only 2,519 subjects were eventually included in our study because approximately 783 individuals were excluded due to missing data.

Our results further suggested that fiber intake, especially the DDE fiber from grains, is associated with the risk of hypertension after controlling for potential confounders.

The original contributions presented in the study are included in the article/supplementary files, further inquiries can be directed to the corresponding author/s.

The studies involving human participants were reviewed and approved by The institutional review boards at all sites have approved the study protocol and all included individual at each site gave informed consent. The patients/participants provided their written informed consent to participate in this study.

All authors contributed to the article and approved the submitted version.

We would like to thank Zhile Lv for her encouragement and help during the writing of the manuscript.

Copyright © 2021 Du, Luo, Wang, Xiao, Xiao, Li and Zhang. This is an open-access article distributed under the terms of the Creative Commons Attribution License (CC BY). The use, distribution or reproduction in other forums is permitted, provided the original author(s) and the copyright owner(s) are credited and that the original publication in this journal is cited, in accordance with accepted academic practice. No use, distribution or reproduction is permitted which does not comply with these terms.

Dietary Strategies for Healthy Aging – Caloric Restriction and Beyond