Association of zinc serum level with metabolic syndrome in iranian children and adolescents: The CASPIAN-V study

Metabolic syndrome is a set of metabolic risk factors associated with cardiovascular diseases and type 2 diabetes (1). Numerous definitions of components and their diagnostic boundaries have been proposed for this syndrome, all of which are associated with metabolic disorders such as elevated blood pressure, impaired glucose and insulin metabolism, dyslipidemia, and central obesity (Measured parameters include: abdominal obesity or waist circumference equal to or more than 90th percentile of the age and sex; Systolic or diastolic blood pressure (SBP or DBP) equal to or greater than 90th percentile by height, age, and sex; Serum triglyceride (TG) level greater than 110 mg/dL, High-density lipoprotein (HDL) equal to or less than 40 mg/dL, fasting glucose level equal to or more than 100 mg/dL) (1–3). Metabolic syndrome is one of the main health hazards worldwide, resulting in a significant number of years lost (DALY) due to its associated morbidity and mortality (3, 4). Although many studies have been conducted on the prevalence of this syndrome in adults based on different definitions and its relationship with cardiovascular diseases (2, 3), there is no precise definition for it in childhood and adolescence. As nutrition plays a major role in growth and development in children, and deficiencies in various nutrients could result in metabolic defects (5), it seems that deficiencies in trace elements such as zinc which plays an essential role in numerous enzyme functions could result in metabolic dysfunction as well (6).

Zinc is a rare and essential element in the body involved in the metabolism of nucleic acids and their stability in protein synthesis, cell division, and gene expression. Furthermore, zinc plays an essential role in the activity of more than 300 enzymes in the body. Its deficiency can result in many skin diseases, mental disorders, pregnancy, lactation, growth disturbances, and susceptibility to infections (7). Hence, in theory, zinc deficiency can result in metabolism defects and metabolic disorders. Since the body does not have a proper zinc reserve, nutrition plays a significant role in providing this micronutrient (8).

Although severe zinc deficiency is rare, studies have shown that mild to moderate zinc deficiency occurs on a large scale in unbalanced diets (9). In Iran, due to the calcareous nature of agricultural soils, bicarbonate water, and the lack of zinc-containing fertilizers, the amount of zinc absorbed by plants is minimal (10–12).

This cross-sectional study was performed using data collected in the Caspian-V study. (Caspian-V study, was a care system for health-related behaviors and risk factors for diseases in students in Iran).

Sampling was done by multi-stage using cluster and stratified sampling method. Class sampling was performed in each province of the country according to the student’s residence (city or village) and educational level (primary and secondary) in a manner commensurate with the size with an equal sex ratio. This means that the number of boys and girls in each province was equal, and their ratio in urban and rural areas was also proportional to the number of urban and rural students. Similarly, the number of samples was divided between the educational levels in the city and the village in proportion to the number of students studying at each level. In this study, 480 students were selected from each province (i.e., 48 clusters of 10 people in each province). In total, according to the study in 31 provinces, 14,880 people were surveyed using the standard questionnaire “WHO-GSHS,” which has been translated into Persian, and its validity has been evaluated and approved in previous studies (14). Trained professionals collected information about health-related behaviors and risk factors for diseases; and assessed anthropometric measurements, including height, weight, waist circumference, hip, neck, wrist circumferences, and blood pressure, for all participating students. One-third of the number of clusters from each province were randomly selected for blood sampling, and a skilled blood sampler took six ccs of their venous blood with consideration of all health issues to measure blood glucose indices, lipid profile, liver enzymes, and serum zinc level. It should be noted that the waist circumference was measured as a waist from the tangent and above the iliac crest to the ground with a metal meter. Metabolic syndrome was defined based on NHANES III (Third National Health And Nutrition Examination Survey)(15) as the presence of 3 out of 5 criteria for the diagnosis of this syndrome, including abdominal obesity or waist equal to or more than 90th percentile in terms of age and sex; SBP or DBP equal to or greater than 90th percentile by height, age, and sex; serum TG level greater than 110 mg/dL, HDL serum equal to or less than 40 mg/dL, fasting serum glucose levels equal to or greater than 100 mg/dL.

The study population was children and adolescents studying in primary or secondary school whose information was recorded in the Caspian Cohort. Participants with incomplete data, according to the studied variables, as well as individuals with reduced renal function (glomerular filtration rate; GFR < 30), Chronic liver diseases, and glucocorticoids were excluded from the study.

The SPSS software version 21 was used for data analyzes. Descriptive analysis results on quantitative variables are presented as mean and standard deviation, and qualitative variables as frequency and relative frequency. Furthermore, the correlation of coefficients was calculated. A p-value less than 0.05 was considered statistically significant.

No information about the identities of individuals entered the study process; hence, the data were anonymous, and at no stage of the study, the individuals’ information was recorded or mentioned. Furthermore, this study was approved by the ethics committee of the Alborz University of Medical Sciences. 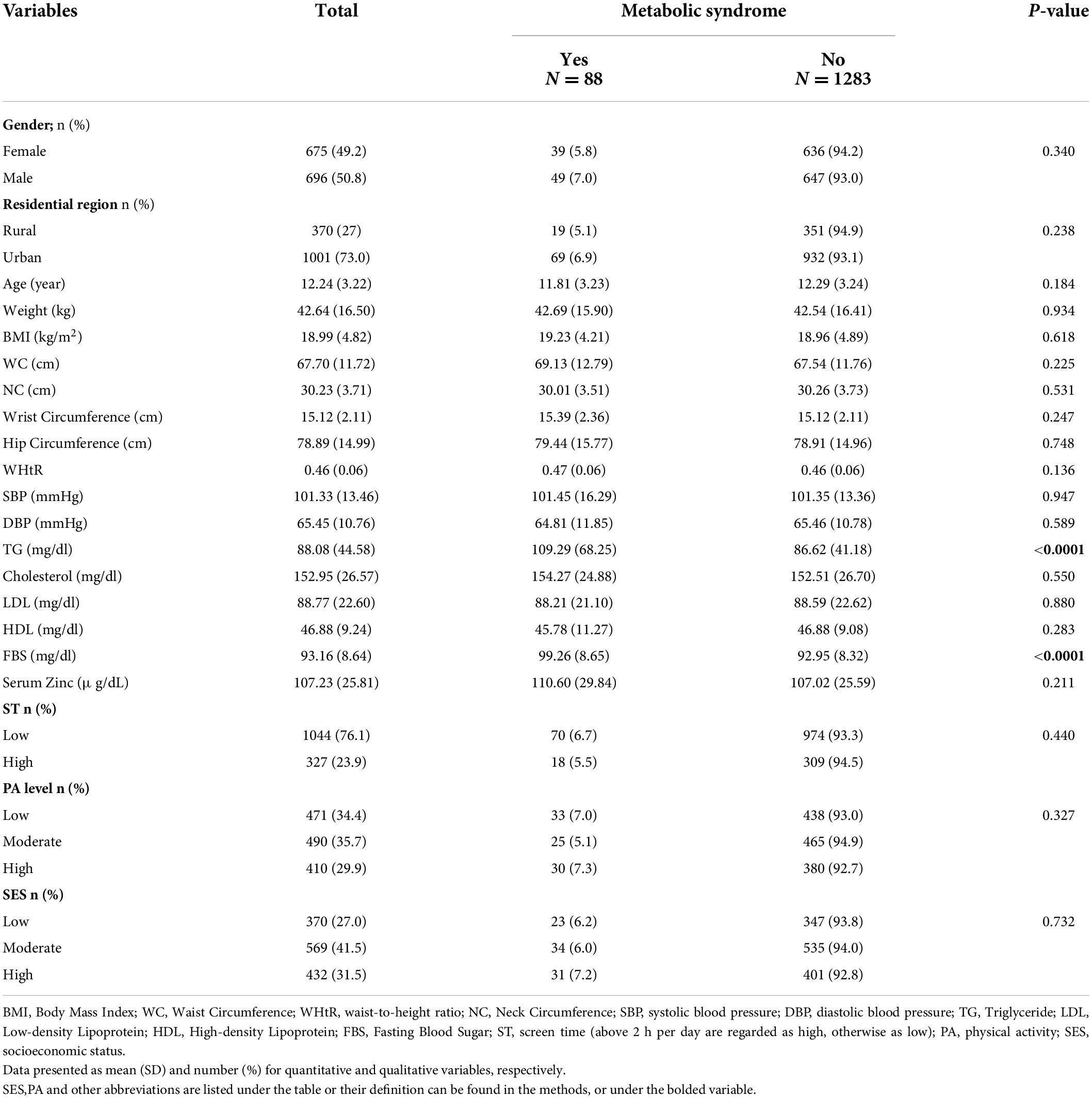 Table 1. Demographic status of the study population according to the presence or absence of metabolic syndrome (n = 1371). 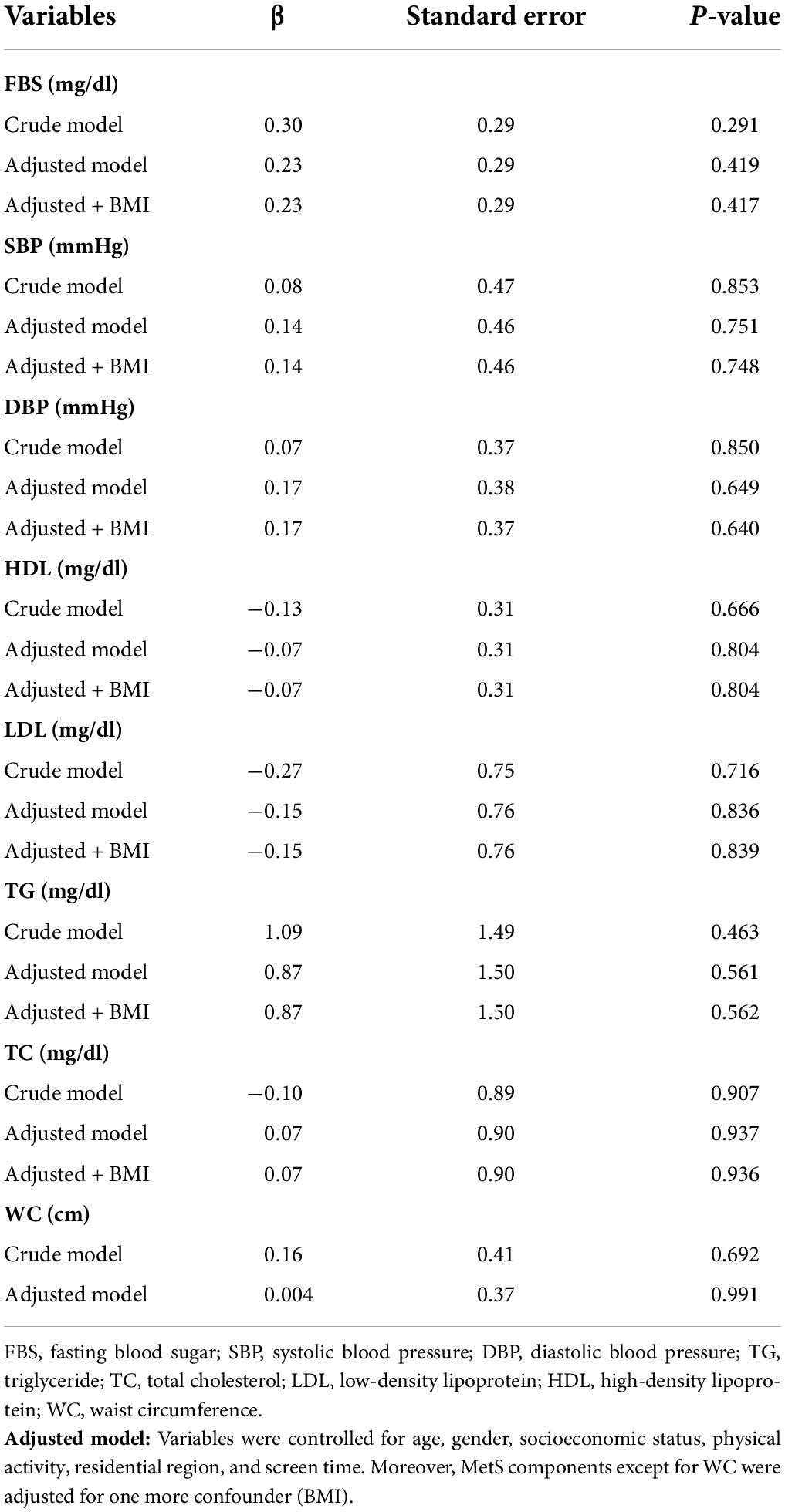 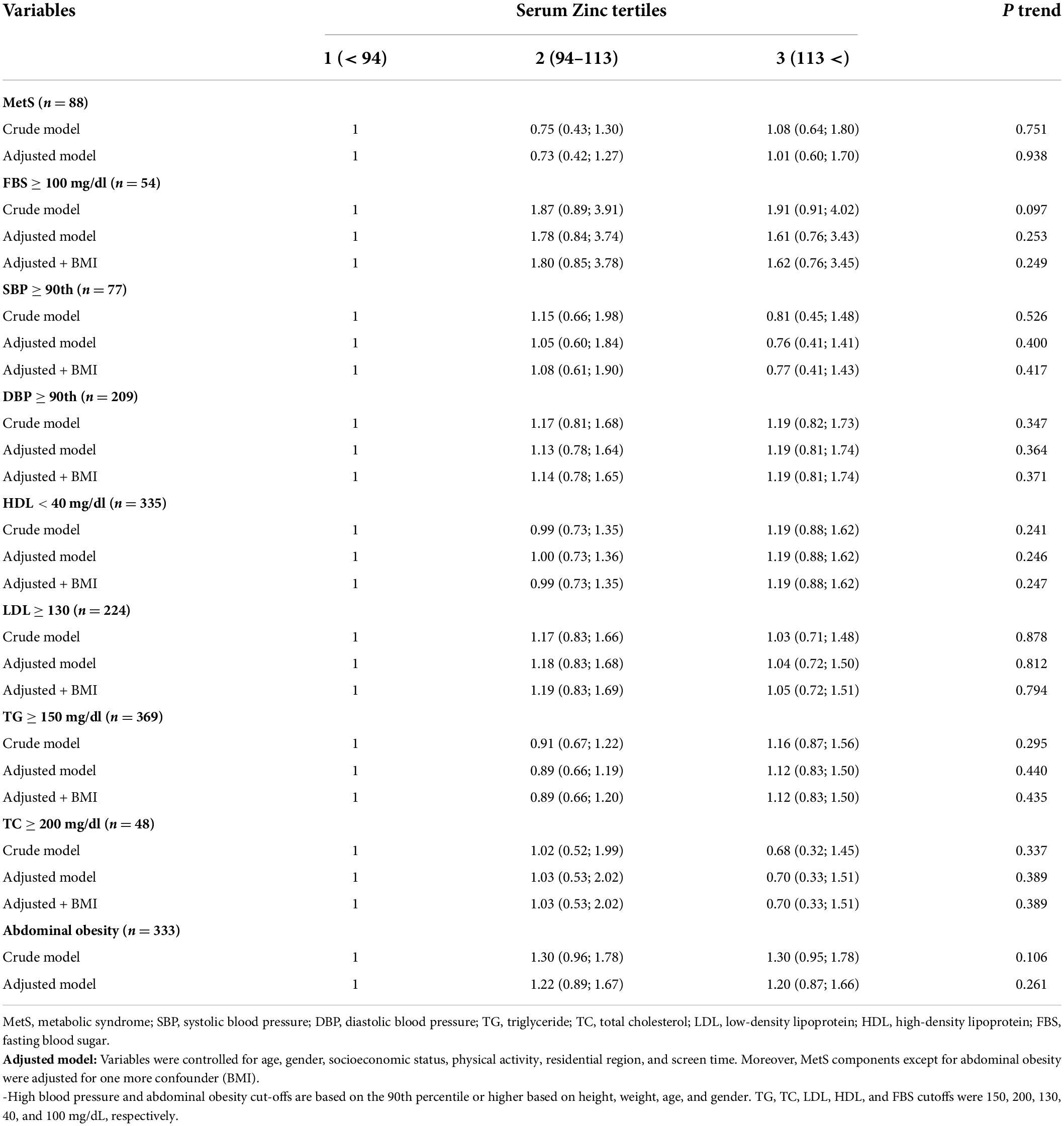 This study investigated the serum level of zinc in children and adolescents and the factors affecting metabolic syndrome. Metabolic syndrome is one of the most significant risk factors associated with cardiovascular disease and type 2 diabetes (3). Studies estimate that more than 100 million children worldwide are obese (16), highlighting the importance of paying attention to metabolic syndrome and its factors in this age group. Moreover, studies also suggest that serum zinc and manganese levels may be essential factors in controlling and synthesizing insulin and controlling fat profile in individuals (17).

However, it should be noted that the findings on this subject are not entirely consistent. For example, a study by Ghasemi et al. in 2014 in Tehran that was performed on 2401 participants, indicated that there is a significant difference between the genders of participants regarding the relationship between serum zinc levels and metabolic syndrome;(21).

The difference in the populations being studied. (children, adults, specific groups of patients), different adjustments, different settings, confounding variables, and most importantly serum zinc level differences across studies could be the cause of the observed controversial findings. As stated zinc plays a part in many metabolic functions, some of these functions are opposite in nature and outcome (20, 22); Thus many metabolic factors, could potentially impact the results of studies (e.g., mean levels of serum zinc, mean age, sex, ethnicity and other related factors of the population). Hence, more detailed studies are recommended to determine the role of serum zinc levels in the progression of metabolic disease.

It should be noted that in these studies, adults were studied, while in this study, the target population was focused on children and adolescents. Therefore, differences in the final findings are to be expected. In this regard, a study was performed on 60 obese Iranian children by giving zinc and placebo supplements. This intervention showed that zinc supplementation reduces LDL, Total Cholesterol, C-reactive protein (CRP), markers of insulin resistance, fasting blood sugar, insulin, and Homeostatic Model Assessment for Insulin Resistance (HOMA-IR) in children. It should be noted that this study was interventional and prospective, not a cross-sectional one (23).

To the best of our knowledge, it is the first study that assessed the relationship between serum zinc levels and MetS components, especially with consideration of confounder variables and impressive sample size. However, there are probably some other unknown confounders that are effective in the exact association. Moreover, this study was cross-sectional and due to its natural cause and effect relationship, could not distinguish.

This cross-sectional study showed no association between serum zinc levels and metabolic syndrome in children. Hence it seems that zinc supplementation in children without zinc deficiency who suffer from Mets or any of its components is redundant. Nonetheless, clinicians must keep racial and age aspects in mind since conflicting findings across different races, sexes, and ages were seen.

Further studies similar studies and cohort studies are needed to reveal the exact relationship between serum zinc levels and metabolic syndrome and warrant our findings.

The original contributions presented in this study are included in the article/supplementary material, further inquiries can be directed to the corresponding authors.

The studies involving human participants were reviewed and approved by Alborz University of Medical Sciences. Written informed consent to participate in this study was provided by the participants’ legal guardian/next of kin.

MQ and NM conceived the study. NMK and ED substantially contributed to the conception and design, data analysis and interpretation, drafted the manuscript, and revised it critically. RK, HA, and LS participated in preparing the manuscript. AM-G, ME, and RH participated in the study design and data acquisition. MQ carried out the analysis of the data. All authors read and approved the final version of the manuscript.

This project was conducted as part of a national school-based surveillance program and was funded by Alborz University of Medical Sciences. The authors are thankful for the large team working on this national project and all participants who cooperated with this study.

Copyright © 2022 Qorbani, Movasaghi, Mohammadian Khonsari, Daneshzad, Shafiee, Ashraf, Sokoty, Mahdavi-Gorabi, Ebrahimi, Heshmat and Kelishadi. This is an open-access article distributed under the terms of the Creative Commons Attribution License (CC BY). The use, distribution or reproduction in other forums is permitted, provided the original author(s) and the copyright owner(s) are credited and that the original publication in this journal is cited, in accordance with accepted academic practice. No use, distribution or reproduction is permitted which does not comply with these terms.