Residential segregation and overweight/obesity among African-American adults: a critical review

The prevalence of overweight and obesity is high among all Americans, and among African-Americans in particular (1–3). For example, rates of overweight/obesity among African-American women are 44% higher than among White women (1–5). Racial disparities in socioeconomic status (SES) (3, 5) and in health behaviors (e.g., diet, physical activity) contribute to racial disparities in body weight (5, 6), and African-American cultural variables such as religiosity (7, 8) and acculturation level (9) contribute as well, but these individual-level factors do not fully explain the disparities (5).

Recent research has highlighted the neighborhood context as an additional determinant of obesity and obesity disparities (5, 10–15). Such studies have identified obesogenic environments as contributors, i.e., neighborhoods that facilitate overweight/obesity via their paucity of parks and recreational facilities, prevalence of fast food outlets, dearth of healthy food options, and dangerousness that discourages outdoor activities (10–15). Low-SES neighborhoods have been demonstrated to be obesogenic environments that contribute to overweight and to obesity among their residents irrespective of resident race-ethnicity (11–15). Racially segregated African-American neighborhoods also meet the criteria for obesogenic environments (16) in terms of their food choices (17–20) and recreational resources (21–23). Thus, residing in a segregated, African-American neighborhood might contribute to overweight and obesity among African-Americans, and might in part explain the racial disparities in body weight that transcend low-SES (10, 16). The relationship between residential segregation and overweight/obesity, however, remains unclear (10, 16). This paper reviews the empirical studies on residential racial segregation and body weight among African-American adults in an effort to elucidate the segregation–obesity relationship.

First, we define racial residential segregation in the U.S. and highlight the various ways in which it is measured. Then, we review and compare studies of segregation and weight among African-American adults to ascertain the nature and strength of that relationship, and highlight its implications for preventing and reducing racial disparities in obesity.

Residential segregation refers to the geographic separation of Whites from minorities (African-Americans in this case) in residential areas (24, 25). It can be measured at any geographic-level (e.g., census tracts, zip codes, counties, Metropolitan Statistical Areas/MSAs) and usually is measured at the level of census tracts or MSAs in health research (25–29). Irrespective of area-level used, segregation can be measured in several ways, including Isolation, Dissimilarity, Concentration, Clustering, Centralization, and Hypersegregation (26, 28, 29). These terms are defined in Table 1. Each of these standard, valid measures of segregation is computed by the U.S. Census Bureau, and ranges from 0 to 1, with ≥0.60 regarded as high segregation (25–29). 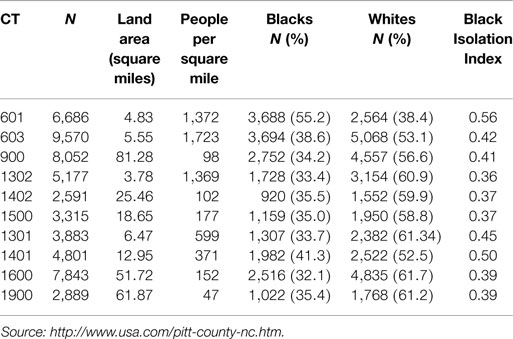 PubMed and PsychINFO were searched using these search terms: African-Americans, Blacks, residential segregation, racial segregation, racial composition (first set of terms), and adult obesity, adult body mass index (BMI), and adult body weight (second terms). This initial search returned 58 publications. Their abstracts then were examined by all authors; publications that were theoretical, dissertations, commentaries, did not measure segregation, focused on other racial-ethnic groups and did not contain African-Americans, or focused on children and did not include adults were excluded. Only articles that were empirical studies of adult body weight, measured segregation, and included U.S. African-American adults were retained. The final set of articles consisted of 11 publications that met all inclusion criteria.

The 11 full-length articles (10, 16, 30–38) were examined independently by the authors, each of whom completed a table detailing these article-variables: author and publication year; database (national vs. local); in-person vs. telephone interview methodology; sample size, gender, and age; definition and measurement of overweight and obesity; measure of segregation and definition of high segregation; control for neighborhood low-SES, and whether the best measure of that (i.e., percent below the federal poverty line [see Ref. (29)]) was used; and their results. Inconsistencies among the tables were discussed and articles re-analyzed until 100% agreement among the authors was reached. The 11 articles are shown in Table 3 with details on the above article-variables. 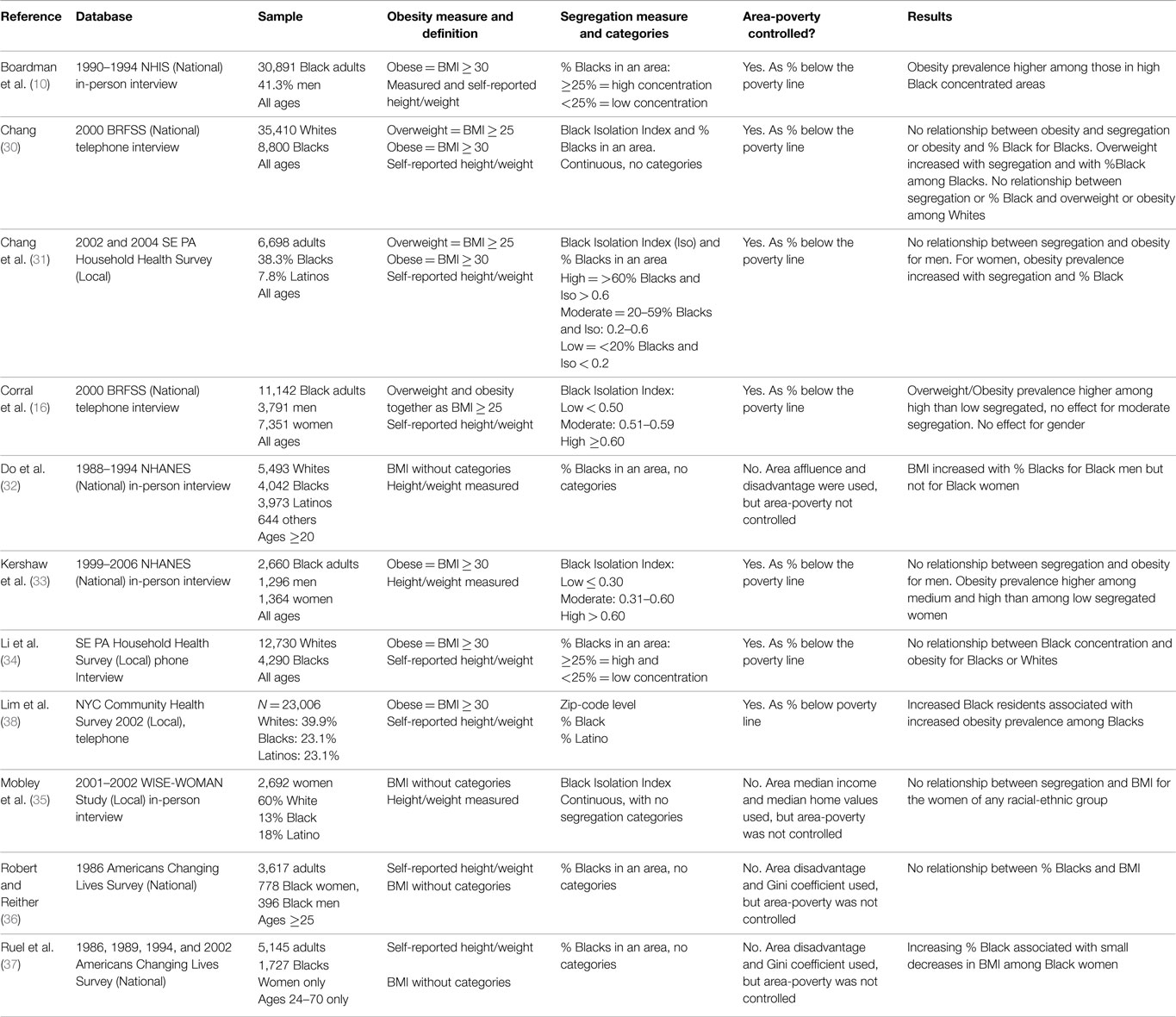 Articles were compared on their (1) definition and measurement of overweight and obesity; (2) measure of segregation and definition of high segregation; (3) measurement and control for neighborhood low-SES; (4) report of gender-specific analyses; (5) use of a local vs. national database and sample; and (6) their findings.

Eight of the 11 studies (73%) reported a positive relationship between segregation and BMI/obesity/overweight; increases in segregation were associated with increases in BMI or in overweight or obesity prevalence in those studies.

Measure/Definition of Overweight and Obesity

Seven of the 11 studies (64%) used percent of area residents below the federal poverty line as their measure of low-SES neighborhoods, and then controlled for area-poverty in their analyses. Six of those studies (86%) found a positive relationship between segregation and overweight/obesity. Of the four studies that used measures of neighborhood SES (e.g., income inequality, median home values) that are less sensitive to area-SES health disparities, two found a positive relationship and two found no effect.

Of 11 studies of segregation and overweight/obesity, 73% reported that increased segregation or high segregation was associated with increased obesity/overweight prevalence or increased BMI among African-Americans adults. The conclusion that segregation is associated with overweight/obesity cannot be drawn from that finding, however, because of the considerable problems in the measures and data-analytic strategies of the studies. Most (55% of) studies did not use a valid measure of segregation. Instead, they defined segregation as the percentage of African-Americans in an area (e.g., ≥25% of area residents), a measure known to lack validity. Others used the Isolation Index (a valid measure) but treated it as a continuous variable, without defining Isolation ≥ 0.6 as high segregation. Overall, 73% of the studies did not define high segregation using valid research categories. Moreover, only 64% used BMI categories to define obesity and overweight, only 64% included adequate controls for neighborhood-poverty in their analyses, and only 36% reported gender-specific analyses despite well-known gender differences in obesity (1–3).

One important limitation is that we included only studies in which residential segregation was measured, irrespective of the validity of that measure. Hence, relevant studies that did not measure segregation were excluded. Two such studies (39, 40) examined racial disparities in obesity (defined as BMI ≥ 30) in racially integrated census tracts and found no African-American–White differences in obesity prevalence in integrated neighborhoods among women (39) or men (40). These two studies indirectly support the tentative conclusion that segregated African-American neighborhoods contribute to racial disparities in obesity. A second limitation is the methods sections of the 11 studies reviewed here. Details of the methods and measures (and even the sample sizes) were not provided in some articles, and hence our summary (Table 3) of their methods and measures (of neighborhood-SES in particular) might be somewhat less than accurate. In addition, we excluded studies of children from this review because the definition of overweight/obesity in children (percentile rank relative to age- and sex-matched peers) differs from the definition for adults, and a single definition was preferred. Studies of segregation and overweight/obesity among children may or may not be similar to those of adults in methodological shortcomings and findings. Despite these limitations, this review is the first of its kind, and highlights serious flaws in this area of research – use of invalid measures of segregation and of obesity foremost among those. Hence, we encourage future studies to use valid measures of segregation and of overweight/obesity to clarify the relationship between them and potentially enhance prevention efforts.

Copyright: © 2015 Corral, Landrine, Hall, Bess, Mills and Efird. This is an open-access article distributed under the terms of the Creative Commons Attribution License (CC BY). The use, distribution or reproduction in other forums is permitted, provided the original author(s) or licensor are credited and that the original publication in this journal is cited, in accordance with accepted academic practice. No use, distribution or reproduction is permitted which does not comply with these terms.