The mortality-to-incidence ratio (MIR) is widely used to evaluate the efficacy of cancer management outcomes for individual countries. However, the association among health care expenditure, human development index (HDI), and changes in MIR over time (δMIR) remains unknown. We aimed to elucidate the significance between these indicators and gastric cancer outcomes in different countries. Among the regions, Asia had the highest number of new gastric cancer cases, gastric cancer-related deaths, age-standardized ratio of incidence, and mortality. Chile had the highest age-standardized ratio (ASR) for gastric cancer incidence and the highest ASR for mortality. Moreover, MIR was highest in Africa (0.91) and lowest in North America (0.43). Of note, MIR was negatively associated with HDI, current health expenditure (CHE) per capita, and CHE/GDP % and δMIR was positively associated with CHE/GDP % in countries with very high HDI. However, δMIR showed no significant associations with these indicators in the countries analyzed. In conclusion, increased HDI, CHE per capita, and CHE/GDP are associated with improved gastric cancer outcomes. In addition, the δMIR could be an indicator that can be used to evaluate the improvement in cancer management outcomes over time.

Along with increasing life expectancy, cancer has become the leading cause of death in humans, and the incidence of cancer and cancer-related deaths is growing rapidly (1). Gastric cancer is one of the most common cancers worldwide; gastric cancer has the fifth highest incidence among all cancers, and the third leading cause of cancer-related deaths in 2018 (2). The epidemiology of gastric cancer varies in different regions. For instance, gastric cancer incidence and mortality rates are highest in Eastern Asia, while the rates in North America are lower than those in other regions (2, 3).

The mortality-to-incidence ratio (MIR) is an indicator that is widely used to evaluate cancer management outcomes in different countries (10–12). MIR was found to be associated with the success of cancer screening, surveillance, and treatment in colorectal cancer and in other cancer types worldwide (10–12). MIRs were reported to be lower in countries with advanced public health systems (11–13). Nonetheless, there is a lack of indicators to evaluate the improvement of gastric cancer management outcomes over time and the association with health expenditure among countries.

To elucidate the relationship, we conducted an analysis using the 2012 and 2018 GLOBOCAN gastric cancer incidence and mortality statistics from 59 countries to determine the association among the human development index (HDI), current health expenditure (CHE), MIR, and the change in MIR between 2012 and 2018.

Cancer epidemiological data were obtained from the GLOBOCAN project (http://gco.iarc.fr/), which is maintained by the International Agency for Research on Cancer of the World Health Organization. GLOBOCAN, which received an update in 2018, is a public access database that provides contemporary estimates of cancer epidemiology worldwide. HDI data was obtained from the Human Development Report Office of the United Nations Development Programme (http://hdr.undp.org/en). HDI was categorized as very high (0.800–1.000), high (0.700–0.799), medium (0.550–0.699), and low (0.350–0.549). In this investigation, countries were excluded based on the data quality report in GLOBOCAN (N = 123), based on missing data (N = 7), and based on outlier MIRs (N = 2). A total of 59 countries were included in the final analysis. No personal information was used in this study, and all data were obtained from public databases. No approval of the Institutional Review Board was needed as well.

Data on health expenditures, including the per capita CHE and the CHE/GDP (ratio of CHE to the percentage of gross domestic product or GDP), were obtained from the World Health Statistics database (https://www.who.int/gho/publications/world_health_statistics/en/). MIR was defined as the ratio of the crude rate (CR) of mortality to the CR of incidence, as previously described (10, 14–16). The δMIR was defined as the difference between the MIR in 2012 and in 2018 (δMIR = MIR [in 2012]–MIR [in 2018]) (17). Associations among the MIR, δMIR, and other factors in various countries were estimated using Spearman's rank correlation coefficient using the SPSS statistical software version 15.0 (SPSS, Inc., Chicago, IL). p values of <0.05 were considered statistically significant. Scatterplots were generated using Microsoft Excel.

Epidemiology of Gastric Cancer According to Regions

Table 1. Summary of the number, crude rank, age-standardized rate, and mortality-to-incidence ratio of gastric cancer according to the regions.

Epidemiology and the Three Indicators of Gastric Cancer in Different Countries 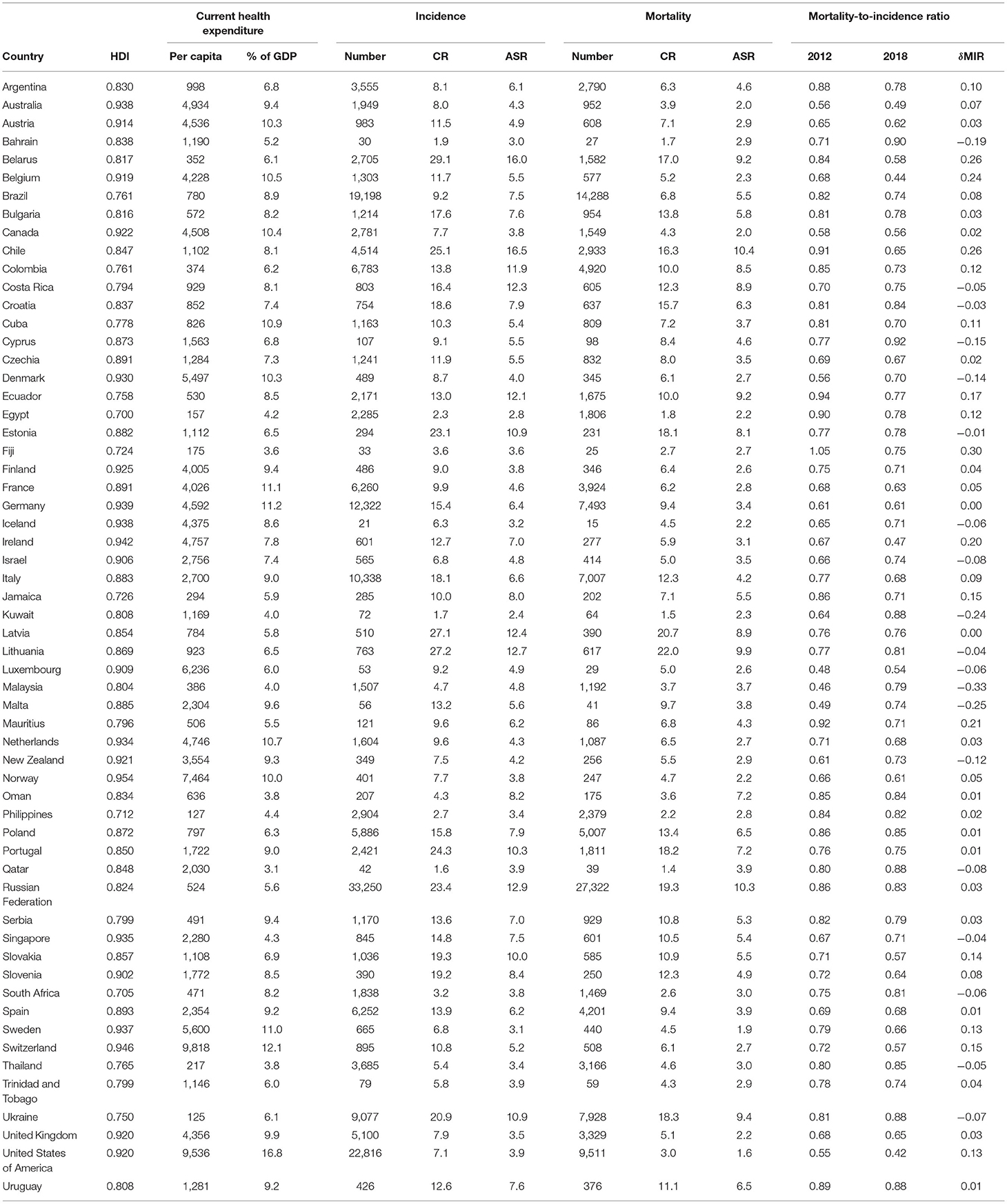 Association Between MIR and the Three Indicators in Different Countries

We further analyzed the association of MIR with HDI, CHE per capita, and CHE/GDP. These three indicators were negatively associated with the MIR for gastric cancer in 2018 (Spearman's rank correlation coefficient ρ, −0.618, −0.628, and −0.592, respectively; all P < 0.001; Figures 1A–C). Furthermore, we analyzed the association of these three indicators with δMIR from 2012 to 2018, and no significant associations of these indicators with δMIR were found (Supplementary Figure 2). Subgroup analysis showed a positive correlation between δMIR and CHE_GDP in “very high” HDI countries (HDI 0.8–1.0, defined by the United Nations Development Programme) (Spearman's rank correlation coefficient ρ = 0.407, P = 0.006; Figure 2). 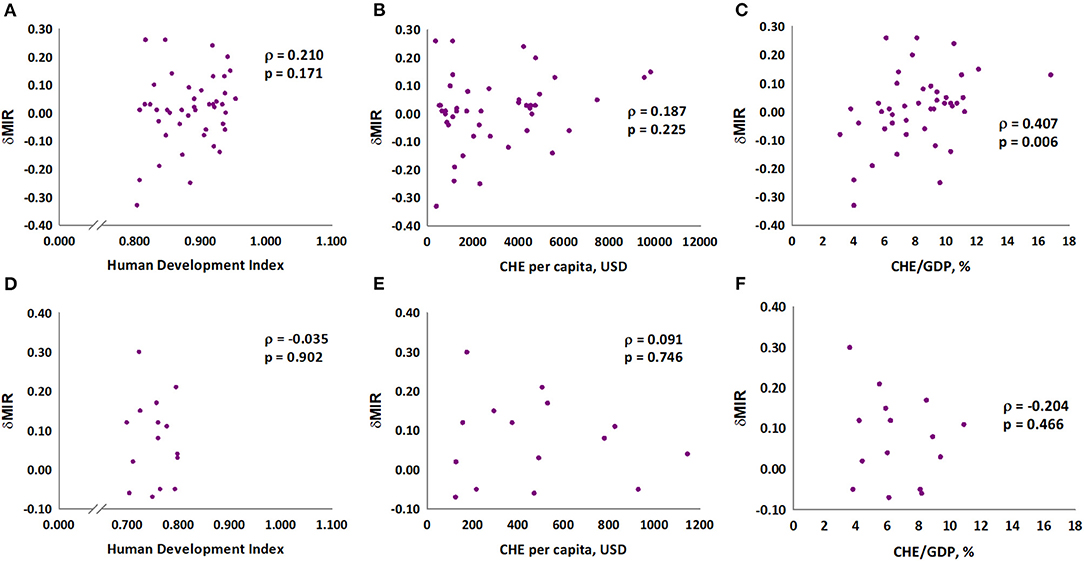 Previous studies have indicated that the MIRs are directly correlated to the health system ranking in lung, colorectal, prostate, stomach, and breast cancers (12). MIRs are also good indicators for evaluating cancer screening and care in colon cancer (10). Rezaeian et al. (18) found that countries with a low HDI index had higher MIRs for all cancers. It was concluded that patterns of cancer occurrence correlate with care disparities at the country level. In comparison, our study revealed that the MIR values were lower in countries with higher health expenditures, especially in countries with higher CHE/GDP ratios. The consistent results suggest a better outcome for patients with gastric cancer in these countries with high health expenditures. Nonetheless, the positive association between δMIR and CHE/GDP ratio in highly developed countries indicates that the improvement of gastric cancer was only made in countries with prosperous economies. Moreover, it may not be long enough to show the advancement in cancer screening, treatment, and health care utilization in different countries in a 6-year interval.

Although the MIR indicates the quality of gastric cancer care, the disparity in gastric cancer incidence and mortality is influenced by many factors. The incidence of gastric cancer is highly dependent on diet, lifestyle, and HP infection in different regions. Japan is one of the regions where gastric cancer is endemic (6). The improvements in clinical outcomes in Japan over the last decades, as well as the improvements in Korea and in other Asian countries, were attributed to their screening program (9, 19, 20). In countries with lower MIR for gastric cancer, the screening modalities and screening program improved with increased medical expenditure. Several novel screening modalities and protocols, such as the use of serum biomarkers, detection of tumor-specific mutations in DNA and proteins in the circulation, and the combination of serum pepsinogen level and esophagogastroduodenoscopy (EGD), improved the early detection of gastric cancer (19, 21–23). In addition, more frequent screening via either EGD or radiography has been reported to improve the early detection and mortality of gastric cancer (7, 19). However, the frequency of screening may be associated with increased medical expenditures in some developed countries.

In our study, several countries had negative δMIR values, which may indicate poor clinical outcomes and worsening cancer care. Increased risk of mortality and more postoperative complications were found in some low/middle-income countries. These findings may suggest the need to enhance surgical techniques and postoperative care. Meanwhile, δMIR could be a useful indicator to evaluate the improvement of gastric cancer care in countries with good healthcare systems.

Our study has some limitations. First, not all countries were analyzed in our study, which may not be exactly the overall burden of gastric cancer in the world. Some countries with high gastric cancer incidence, such as Japan, South Korea, and China, were not included in the analysis due to limited data sources. However, we believe that 59 countries could be a representative study of the cost and outcome of the global burden of gastric cancer. Second, we determined the δMIR between 2012 and 2018, and this parameter could serve as an indicator of the improvement in cancer management for individual nations. However, it cannot be a good surrogate for cancer survival because long-term survival is unknown (28). Third, we found that the HDI, CHE per capita, and CHE/GDP were negatively associated with MIR; however, the positive association between δMIR and health expenditure is limited to countries with very high HDI. The unexpected results could be influenced by the cost of screening, treatment, and health care utilization in different countries. Health expenditure and HDI are indicators aimed at targeting several types of outcomes in health and well-being, not only cancer. The correlation between these indicators is indirect and not well-founded. The association was analyzed across countries; hence, the result might not be directly applicable in any single country. Fourth, per capita expenditure in US dollars is not comparable across a diverse group of countries.

The reviewer XL declared a shared affiliation with the authors, to the handling editor at time of review.

The Supplementary Material for this article can be found online at: https://www.frontiersin.org/articles/10.3389/fpubh.2021.713895/full#supplementary-material

Copyright © 2021 Yang, Wang, Hung, Liu, Sung and Tsai. This is an open-access article distributed under the terms of the Creative Commons Attribution License (CC BY). The use, distribution or reproduction in other forums is permitted, provided the original author(s) and the copyright owner(s) are credited and that the original publication in this journal is cited, in accordance with accepted academic practice. No use, distribution or reproduction is permitted which does not comply with these terms.