The Epidemiological Pattern and Co-infection of Influenza A and B by Surveillance Network From 2009 to 2014 in Anhui Province, China

Influenza-like illness (ILI) is one of the most important public health problems globally, causing an enormous disease burden. Influenza infections are the most common cause of ILI. Bacterial and virus co-infection is common yet the data of co-infection with influenza A and B viruses are scarce. To identify the epidemiological patterns of and co-infection of influenza A and B in Anhui province, China, we analyzed the surveillance data of 5 years from 2009 to 2014 collected by the Chinese National influenzas network. The results showed that the weekly ratio of ILI was 3.96 ± 1.9% (95% CI 3.73–4.2%) in outpatients and the highest affected population was children under 5 years old. The epidemic of influenza viruses was highest during 2009–2010. For the other 4 surveillance years, school-aged people (5–14 years) were the most highly affected population. Influenza B and H3N2 viruses were more prevalent than H1N1pdm09 virus after 2010. In addition, a significant co-circulation of influenza A (H1N1pdm09 and H3N2) and influenza B virus was detected with 0.057% PCR positive rate during 2009–2014 in Eastern China, yet isolated only in pediatric patients. Our data reveals school-aged population would be the main vulnerable population and a distinct seasonality for influenza. In addition, the co-infection of influenza A and B were found in Anhui Province, China. Ongoing surveillance is critical to understand the seasonality variation and make evidence-based vaccination recommendations. Information on the epidemiological patterns and co-infections of influenza A and B can help us to implement different strategies for selecting vaccine formulations and monitoring new emerging influenza strains. In addition, the identification of the susceptible population can help us to develop more precise protection measures.

Influenza virus, one of the most important respiratory viruses presenting globally annual seasonal epidemics, causes fatal respiratory diseases to humans. The estimated number of global annual influenza-associated respiratory deaths were 291,243–645,832 per year during the 1999–2015 period, and 9,243–105,690 deaths occur annually among children younger than 5 years (1). The mortality related to influenza virus infections adhere to a cyclic pattern fluctuating with seasonal changes in temperature and humidity, or occasional pathogenicity changes due to new gene mutations or exchanges (2–5). It is well-recognized that bacterial co-infection was frequent and critically led to the mortality in influenza virus infection (6, 7). In contrast, previous reports indicated that medical manifestations in cases of dual influenza infection and simple infection are similar (8). Recent ferret model study implied that prior infection antigenically related and unrelated viruses protected from subsequent infection or modified the infection kinetics of the challenge virus (9). The epidemiological and virological study of dual influenza infection cases is of major interest particularly for monitoring emerging influenza strains, which could perpetuate epidemic or pandemic events. However, co-infection with different influenza type/subtype viruses is rare (8, 10), and remain to be fully elucidated due to some limitations of many studies. Co-infections with influenza A subtypes or/and influenza B virus were detected in several surveillance areas regarded as rare events (11). The epidemic of influenza in Anhui Province, China generally exhibited Influenza B, H3N2 and H1N1pdm09 alternating or co-prevalence trend and presented obvious seasonal characteristics, showing single and double peaks, i.e., the peak is bound to occur every winter and spring, while the summer peak occurs in alternate years. In the present study, we described the epidemiological pattern of influenza A and B by surveillance network in Anhui province, eastern China from 2009 to 2014. In addition, we also investigated co-infection of influenza A and B and identified the ssusceptible population.

Isolation of the Virus and Identification of Type/Subtype

The samples of pharyngeal swab were maintained in a viral-transport medium and propagated in MDCK cells for 72 h at 35°C. The supernatant was tested by using hemagglutinin (HA) assay with human “O” type red blood cells, and influenza type and subtype was performed for those with positive hemagglutinin inhibition tests or PCR. The extracted RNA was first tested for the presence of influenza A and B viruses. The nucleic acid showing positive for influenza A/B was further differentiated into subtypes and lineages. Influenza A positive samples were screened for H1pdm and H3 whereas samples showing influenza B positive were tested for B/Yamagata and B/Victoria lineage.

HI was performed as previously described (13). Reference sera were handled with a 1:4 (vol/vol) of receptor disrupting enzyme for 18 h at 37°C and then incubated at 56°C for 30 min. The reference serum was titrated with a 2-fold dilution of PBS (initial dilution of 1:20) and then 4 HAU/25 μl virus was added for the assay.

Consultation of ILI in Anhui Province 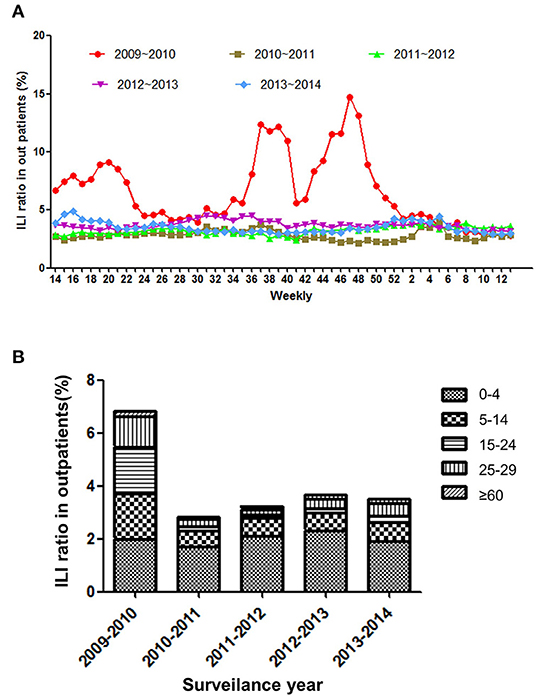 The epidemic of influenza viruses showed fluctuation in different surveillance year, and the cycling pattern present big difference in these surveillance years. As is shown in Figure 2, the activities of influenza viruses were the strongest in 2009–2010 and kept a high level for long period (July 2009–March 2010) and peaked in November. In addition, three peaks (located in spring, summer, and winter respectively) were present in 2010–2011 and 2012–2013. Both summer peaks were raised by H3N2 influenza virus, whereas only spring and winter peaks presented in 2011–2012 and 2013–2014. In those spring and winter epidemic peaks, influenza A (H1N1pdm09, H3N2) and B exhibited co-circulation. Of note, the novel H7N9 avian influenza virus infection was spotted among ILI patients in 2013 and 2014 by the surveillance system. 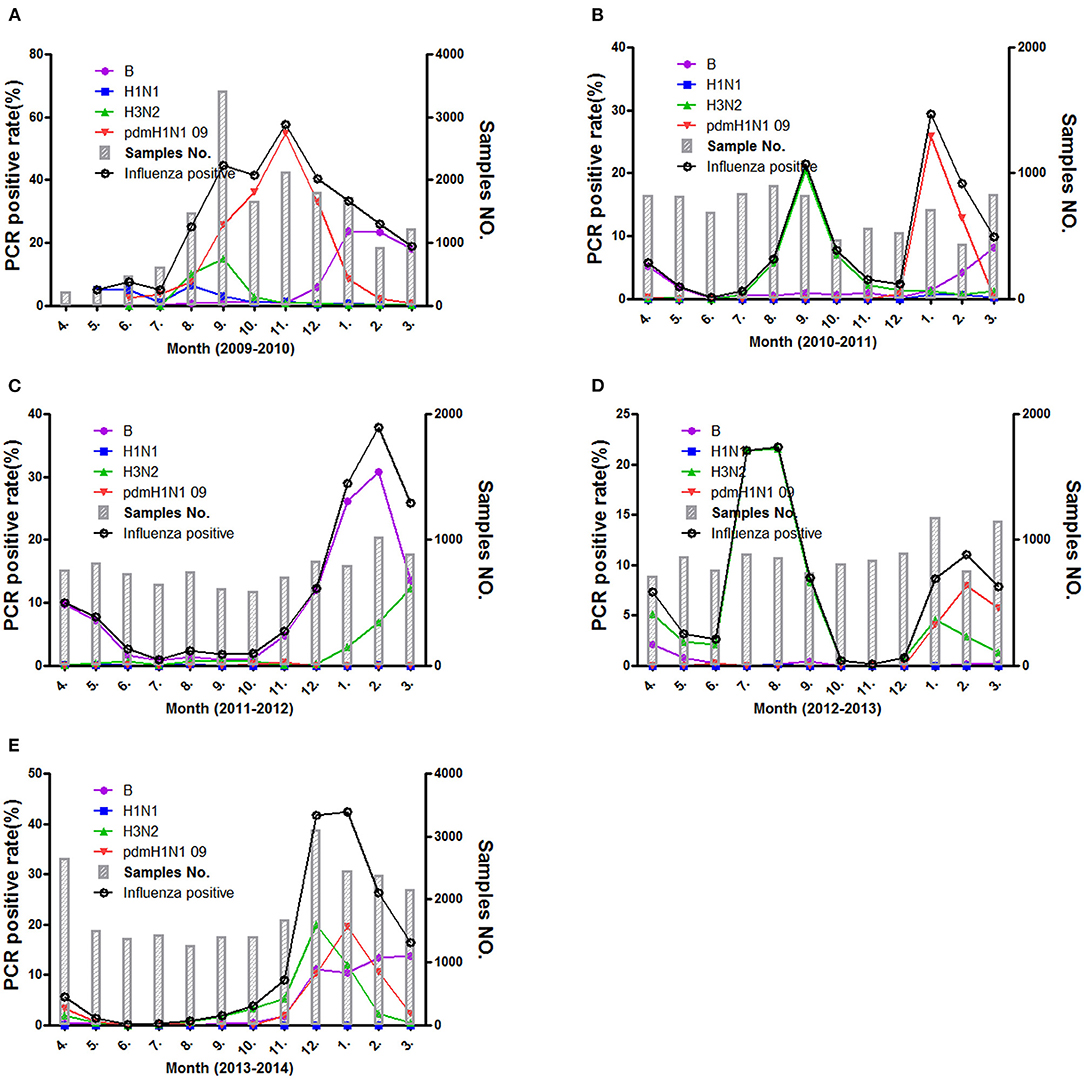 Figure 2. The positive rate of different influenza subtypes during the different surveillance years (A–E) from 2009 to 2014. 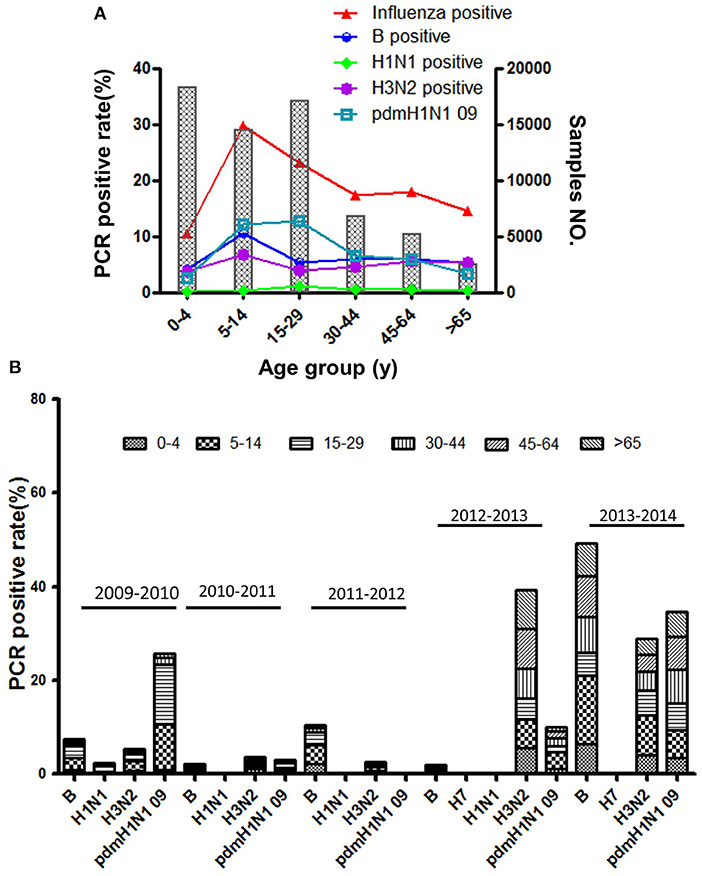 Co-infection With Influenza A and B in ILI Patients

The co-infection of influenza viruses was detected in ILI patients by PCR during the five surveillance years. The detected rate of co-infection was 0.057% in all collected ILI samples, and 0.58% in influenza PCR positive samples. To be consistent with influenza epidemic season, the positive co-infection peaked in the winter, summer or spring (Figure 4). Figure 4. The positive rate of influenza co-infection in different surveillance months from 2009 to 2014.

To define viral features of co-infection, the available samples were collected for viral isolation. Nine live viruses were isolated from 25 PCR-positive samples, four of which had detectable HI titers for dual viruses, including two H1N1pdm09 combined with Influenza B (Yamagata) and two H1N1pdm09 combined with H3N2 infection, respectively (Table 1). All of these 4 samples were collected from pediatric patients. The remaining five samples were isolated with only a single virus with detectable HI titers.

Table 1. Co-infection with influenza A and B in ILI patients enrolled.

Effective influenza surveillance systems could help us decipher epidemiology and seasonality of influenza and further optimize possible influenza control strategies. The ILI consultation rates reported by Chinese influenza surveillance network in Anhui province of eastern China showed that ILI affected all aged people through whole year and was remarkably higher in 2009–2010 than in other surveillance years. To be consistent with ILI epidemics, influenza positive rates were the highest in 2009–2010 since H1N1pdm09 outbreak (14, 15). In addition, the data showed that ILI consultation were the highest in children aged <5 years. However, lab detection showed that influenza infections were the most predominant in school aged patients in the surveillance years instead of the youngest patients. In contrast, the most slightly affected people were the youngest patients among the monitored population. The data suggested that other respiratory pathogens may induce youngest ILI patients more frequently than influenza viruses as recent report (16, 17), and school-aged children should be the mainly concerned points for influenza controls in Anhui province China. In addition, the senior school-aged people were more increasingly affected during pandemic year, that is consisted with the previous reports where inpatients in the pandemic season were significantly younger compared with those in the pre-pandemic or post-pandemic seasons (18–20). It may be partially associated with that young adult in the pandemic season were less likely to have been vaccinated (20).

Influenza seasonality in Anhui province China was manifested by seasonal variations in different surveillance years. Except 2009–2010 surveillance year with H1N1 pandemic, two different epidemic patterns were present in the post the 4 surveillance years. Besides the normal winter and spring peaks, a summer peak presented in both 2010–2011 and 2012–2013 surveillance year. Similar recommendations of vaccination have been proposed for China recently (21). Recent data from countries in south and south-eastern Asia also indicate that countries consider vaccination with newly recommended vaccine in May-June prior to seasonal epidemic (22). In addition, the surveillance system presented a high sensitivity on monitoring the activity of the influenza viruses. An H7N9 case who was one of the earliest confirmed cases in mainland China was reported by the system (23, 24). Consequently, the surveillance networks would play a positive role in making evidence-based policy of control and prevention.

In the present study, human co-infections caused by several influenza viruses were detected in the surveillance epidemics. However, live dual viruses were merely detected in a few cases. It means that there was a prepotent virus in the infections with dual influenza viruses associated with viral interference or cross-reactive immune responses (25). Infections with heterosubtypic influenza A viruses presented shortening of virus shedding in previous studies (26). In addition, Cross-reactive epitopes have been found between influenza A and B viruses in the fusion peptide of the HA and enzymatic region of neuraminidase (25). Notably, the possibility of dual virus infection with similar replication level in vivo may be more frequent in young patients, that may be associated with host immune response to the infected virus. Previous studies shed a light on the immune response to influenza virus was weaker in the younger children and those without preexisting immunity (27). Theoretically, dual influenza virus infections represent a potential source of multiple viral transmission and constitutes a basis for virus recombination between two human strains or one human and one avian viral strain (28, 29). So, it may be valuable to monitor the potential reassortment due to co-infection in pediatric patients or those without preexisting immunity.

In the aggregate, we elaborated two different patterns of influenza circulation in different surveillance years in Anhui province, China. In view of school-aged children were the mainly affected patients in ILI associated with influenza viruses, we propose to implement a vaccination program in school-aged population in Anhui province. Influenza B, H3N2 and H1N1pdm09 co-circulated in annual epidemics, and the co-infections with influenza viruses were frequent in epidemic peaks. These data help us implement strategies to select vaccine formulations and monitor potential recombinant viruses in surveillance programs.

Influenza surveillance data used and analyzed in the current study are available from the corresponding authors on reasonable request.

This work was supported by the Scientific Research Projects of Health Commission of Anhui Province in 2021 (grant number: AHWJ2021a030).

We appreciate the Chinese influenza surveillance network for providing the clinical samples and data collected from patients.

The Supplementary Material for this article can be found online at: https://www.frontiersin.org/articles/10.3389/fpubh.2022.825645/full#supplementary-material

Copyright © 2022 He, Hou, Chen, Yu, Chen, He, Liu, Gong, Huang, Wu, Pan and Gao. This is an open-access article distributed under the terms of the Creative Commons Attribution License (CC BY). The use, distribution or reproduction in other forums is permitted, provided the original author(s) and the copyright owner(s) are credited and that the original publication in this journal is cited, in accordance with accepted academic practice. No use, distribution or reproduction is permitted which does not comply with these terms.