Methods: A total of 2,579 participants (697 cases and 1,882 controls) was included in this cross-sectional study. Plasma copper concentrations were determined by inductively coupled plasma mass spectrometry. Multivariable logistic regression model was used to determine the association between plasma copper concentration and prevalence of diabetes.

Diabetes has become one of the most important worldwide public health challenges, especially in China (1, 2). The estimated prevalence of diabetes in China significantly increased from 10.9% in 2013 to 12.4% in 2018 (3), and it is estimated that China will be ranked first for the number of adults with diabetes till 2045 (2). Therefore, the identification of risk factors of diabetes is urgently needed for primary prevention of diabetes. Recently, more attention has been given to studying the effects of trace elements on diabetes risk (4–8).

Copper is an essential trace element acting as a catalytic cofactor in some vital enzymes for metabolism and it plays an important role in protein transportation (9, 10). Despite being essential, excessive copper may mediate the formation of excessive damaging reactive oxygen species (ROS) via Haber-Weiss and Fenton-like reactions (11), which has been reported as a trigger for insulin resistance (12). The Cu-Superoxide dismutase (SOD) and hydrogen peroxide (H2O2) system may induce lipid peroxidation (13), which is closely associated with diabetes (14). In addition, excess copper has been reported to reduce the relative abundance of short-chain fatty acid producing bacteria and increase the relative abundance of Corynebacterium, which collectively may promote metabolic inflammation and poor glucose control (15). Based on these previous findings, plasma copper concentration, which is frequently used to estimate nutritional status of copper, may be related to prevalence of diabetes (16).

Previous studies investigating the association between plasma copper concentration and prevalence of diabetes are limited and have shown divergent results due to variations in region, sample size and potential confounders adjusted for in analysis models. A meta-analysis (8) has reported that diabetic patients have higher levels of plasma or serum copper than healthy controls. Three case-control studies conducted among Chinese adults are in agreement with the meta-analysis study (17–19), and all of these studies have shown a positive association between plasma or serum copper concentration and diabetes. However, other studies have reported no significant differences in plasma copper levels between diabetic patients and controls (20, 21), or no association between plasma or serum copper and diabetes in European populations (22, 23). These studies were conducted with relatively small sample sizes of Europeans and with a limited number of confounders adjusted for in the models.

This study aimed to determine the association between plasma copper concentration and prevalence of diabetes in a nationwide cohort of Chinese adults with hypertension.

The study population is from an ongoing, multi-centric, community-based, cross-sectional survey initiated in February 2017 in order to identify, register and educate individuals who are at high-risk for both hypertension and elevated total homocysteine [individuals with essential hypertension according to the diagnostic criteria of the 2010 Chinese guidelines for the management of hypertension (29) and elevated total homocysteine (tHcy) (total homocysteine ≥10 μmol/L)] in China. Individuals were openly recruited from various communities according to pre-defined criteria. Exclusion criteria included: severe mental disorders; abnormal laboratory tests or clinical manifestations that render inappropriate participation as evaluated by the investigators; and unwillingness to participate in the study. The study was conducted according to guidelines laid down in the Declaration of Helsinki and was approved by the Ethics Committee of Peking University First Hospital, Beijing, China (Ethics code: 20161231). Written informed consent was obtained from all study participants. 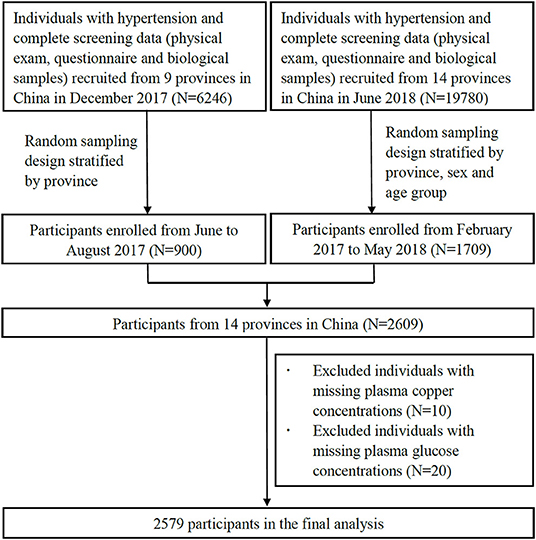 Cases of diabetes were defined as participants with fasting blood glucose ≥7.0 mmol/L (31), a previous physician-diagnosis of diabetes, or who were currently using glucose control drugs from June 2017 to May 2018.

Data on demographic and lifestyle characteristics of the study participants, including current smoking, current alcohol drinking, family history of diabetes, use of antihypertensive drugs and use of lipid lowering drugs were collected by the same questionnaire as was previously reported (30). Height was measured to the nearest 0.1 cm and weight was measured to the nearest 0.1 kg. The calculation of body mass index (BMI) was weight in kilograms divided by the square of height in meters. Blood pressure was measured at three consecutive times and the mean values of systolic blood pressure (SBP) and diastolic blood pressure (DBP) were used for analysis.

A total of 2,579 participants were included in this study (697 cases of diabetes and 1,882 controls). The mean age of total participants was 63.2 ± 13.3 years, 53.5% were males and the mean BMI was 25.0 ± 3.6 kg/m2. The mean plasma copper concentration of total participants was 95.3 ± 18.9 μmol/dl (Table 1). Compared with controls, diabetic cases were more likely to be older, have higher BMI, have a family history of diabetes, current use of lipid lowering drugs and have higher TG levels, and more likely to have lower diastolic blood pressure, tHcy, TC and HDL-C levels (P < 0.001; Table 1). There were no significant differences in sex, current smoking status, current alcohol drinking status, current use of antihypertensive drugs, systolic blood pressure and plasma copper concentrations between diabetic cases and controls (Table 1).

Table 1. Characteristics of 2,579 Chinese adults with hypertension by diabetic statusa.

Association Between Plasma Copper Concentration and Prevalence of Diabetes

Table 2. The association between plasma copper concentration and prevalence of diabetes in 2,579 Chinese adults with hypertensiona. 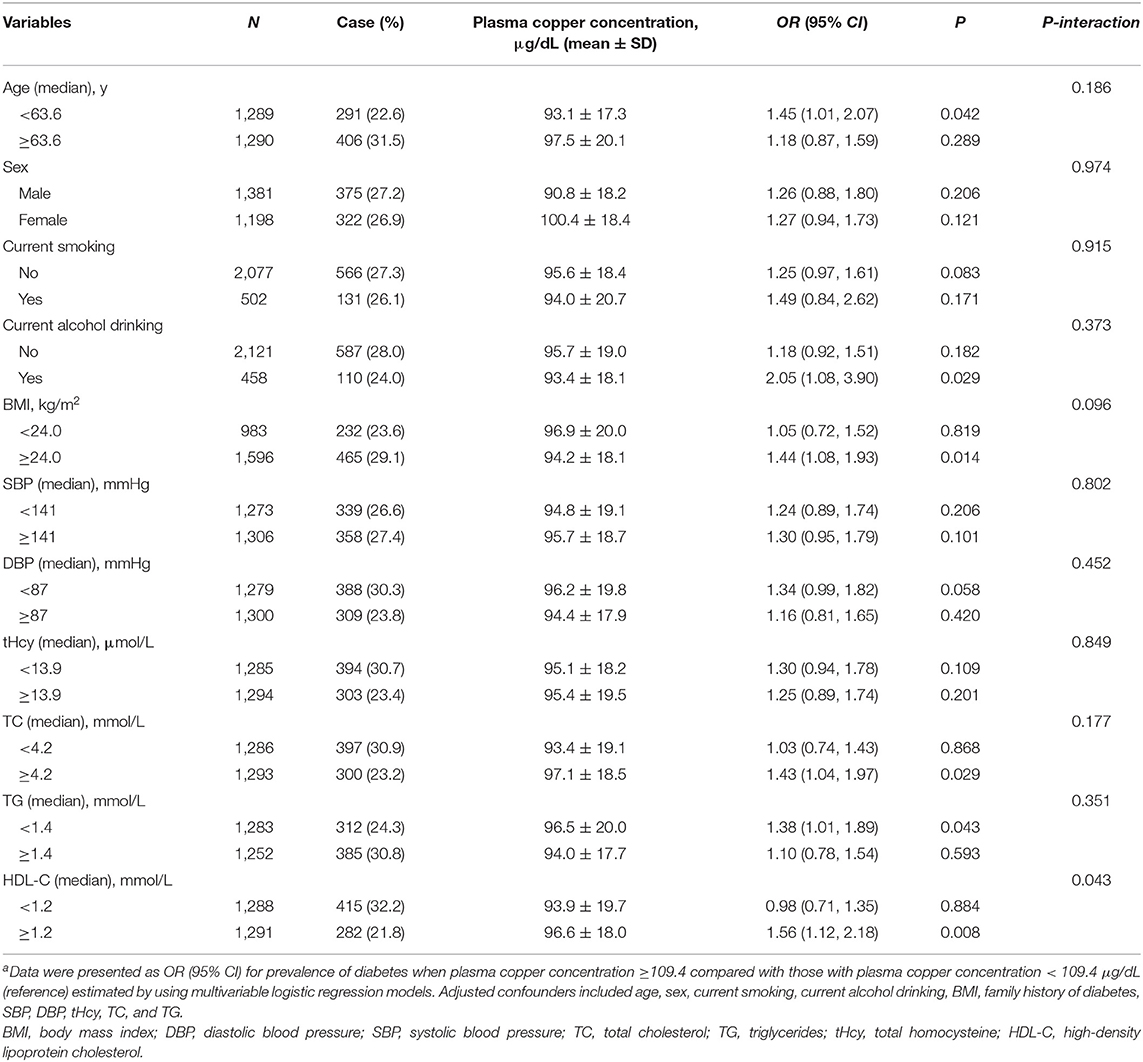 Table 3. Stratified analyses and effect modification on the association between plasma copper concentration and prevalence of diabetes in 2,579 Chinese adults with hypertensiona. 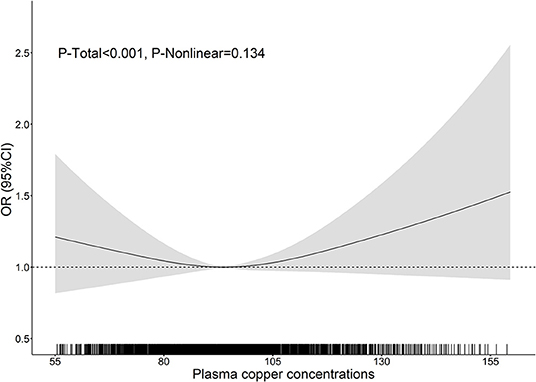 Two underlying mechanisms may explain the positive association between higher plasma copper concentration and increased prevalence of diabetes. Copper contributes to increased oxidative stress via enhancing the formation of ROS through Haber-Weiss and Fenton-like reactions, and via catalytically participating in the generation of hydroxyl radicals by hydrogen abstraction (11). These consequences lead to beta cell dysfunction, decline of insulin secretion and insulin resistance (12, 34). In addition, a previous study has demonstrated that Cu2+ ions can stimulate the generation of H2O2 via mediating the process of aggregating human amylin into amyloid fibrils, which may contribute to the progressive degeneration of islet cells in type 2 diabetes (35).

In conclusion, there was a positive association between plasma copper concentrations and prevalence of diabetes in Chinese hypertension adults with higher HDL-C concentration. Further studies are needed to confirm the causal relationship between copper status and diabetes in Chinese populations with hypertension and explore the underlying mechanisms.

The datasets of the current study are available from the corresponding author upon reasonable request.

The studies involving human participants were reviewed and approved by the Ethics Committee of Peking University First Hospital, Beijing, China (Ethics Code: 20161231). The patients/participants provided their written informed consent to participate in this study.

The Supplementary Material for this article can be found online at: https://www.frontiersin.org/articles/10.3389/fpubh.2022.888219/full#supplementary-material

Copyright © 2022 Cui, Chen, Lu, Wang, Zhou, Zhang, Wang, Lin, Song, Liu, Huang, Chen, Tang, Gao, Duan, Wang, Zhang, Xu, Yang, Qin and Meng. This is an open-access article distributed under the terms of the Creative Commons Attribution License (CC BY). The use, distribution or reproduction in other forums is permitted, provided the original author(s) and the copyright owner(s) are credited and that the original publication in this journal is cited, in accordance with accepted academic practice. No use, distribution or reproduction is permitted which does not comply with these terms.