While the potential of using helical microrobots for biomedical applications, such as cargo transport, drug delivery, and micromanipulation, had been demonstrated, the viability to use them for practical applications is hindered by the cost, speed, and repeatability of current fabrication techniques. Hence, this paper introduces a simple, low-cost, high-throughput manufacturing process for single nickel layer helical microrobots with consistent dimensions. Photolithography and electron-beam (e-beam) evaporation were used to fabricate 2D parallelogram patterns that were sequentially rolled up into helical microstructures through the swelling effect of a photoresist sacrificial layer. Helical parameters were controlled by adjusting the geometric parameters of parallelogram patterns. To validate the fabrication process and characterize the microrobots’ mobility, we characterized the structures and surface morphology of the microrobots using a scanning electron microscope and tested their steerability using feedback control, respectively. Finally, we conducted a benchmark comparison to demonstrate that the fabrication method can produce helical microrobots with swimming properties comparable to previously reported microrobots.

To generate the stress within the 2D structures, the traditional rolled-up technology often involved complex fabrication procedures and expensive equipment. For instance, a molecular beam epitaxy machine was used and a dual-layer of semiconductor-metal materials was deposited when using the self-scrolling method to fabricate helical microrobots (Zhang et al., 2009a). In another example, expensive equipment for glancing angle deposition (GLAD) was used to produce anisotropic stress within 2D microstructures (Li et al., 2012a). In this paper, we propose a method to fabricate helical microrobots using a roll-up process achieved using conventional and commonly available microfabrication technologies: photolithography and electron beam evaporation. This method utilizes the roll-up of the photoresist to bend outer the metal layer, forming magnetic helical microrobots after the removal of the photoresist. The swimming properties of the helical microrobots in this work are comparable to the previously reported helical microrobots, which validates the feasibility to use the proposed fabrication method. Since the fabrication method only requires the use of conventional microfabrication technologies, this work has the potential to be useful for creating a variety of 3D complex microstructures with ease and may serve as a foundation for fabricating helical microrobots for large-number deployments in future applications. In short, the proposed fabrication method not only reduces the complicity of the current rolled-up technology but also reduces the cost of fabrication.

The fabrication procedure is shown in Figure 1A. First, photoresist (MicroChemicals, AZ® nLof 2070) was spin-coated at 3000 rpm on a clean silicon wafer. The photoresist is then made into a sacrificial layer through photolithography (SUSS, MA6); parallelogram/rectangular shapes patterned on a mask were transferred to this photoresist layer. Then, a 100 nm nickel layer was deposited on the 2D photoresist patterns via electron beam evaporation (HVV, TF500); the nickel will make up the entire body of the microrobots. Next, the sample was immersed in N-Methyl Pyrrolidone (NMP) solution (Aladdin, 99.5%); subsequently, the photoresist was in contact with the NMP solution and swelled up causing the 2D patterns to spontaneously roll up into the coils. The final 3D helical-shaped nickel microstructures emerged when all the photoresists dissolved away in the NMP solution. Finally, the sample was washed three times using isopropanol (Aladdin, 99.5%) and then placed in deionized water for experiments later. The coils (before photoresist dissolution) and final helical microrobots (after photoresist removal) could be observed in Figures 1B,C, respectively. 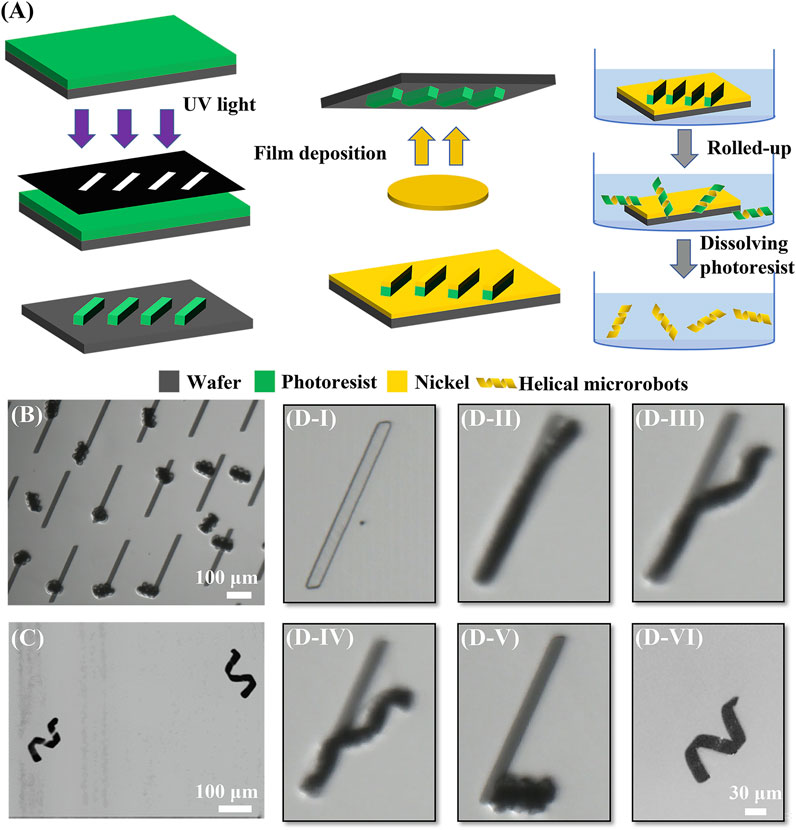 FIGURE 1. Fabrication procedure of helical microrobots. (A) Schematic diagram of the fabrication procedure. (B) Image of coils after rolling. (C) Image of helical microrobots via an optical microscope. (D) Microscope images of the rolled-up process. (D–I) 2D pattern after physical vapor deposition; (D-II) beginning of the rolled-up process when photoresist began to swell and one tip began to lift; (D-III) rolling up along the long edge and the other tip began to roll up; (D-IV) the two tips rolled up from opposing sides and met at the point of strongest interfacial adhesion; (D-V) rolled up into a coil as swelling completes; (D-VI) coil loosened into helical microrobot after the removal of photoresist sacrificial material.

To elucidate the mechanism of the rolled-up process caused by the swelling of the photoresist layer, the entire process was recorded at 100 frames per second for observation (see Supplementary Video S1). The entire rolled-up process using a parallelogram pattern with a length of 300 μm and a tilt angle of 60° is shown in the zoomed-in snapshots of Supplementary Video S1 in Figure 1(D-I)–1 (D-V). First, the NMP solution was added to the 2D parallelogram patterns. After the photoresist absorbed solvent molecules from the NMP solution, the macromolecular polymers would begin to swell and roll up. Due to the edge effect (Alben et al., 2011) and the internal stress generated by the swelling at the interface between the photoresist and the nickel layer, one tip of the 2D pattern was lifted off; subsequently, the 2D pattern rolled up along the direction parallel to the short edge, as shown in Figure 1(D-II). Next, the other tip lifted off in the direction perpendicular to the respective short edge, and the pattern began to roll up from the other tip, as shown in Figure 1(D-III). The different etch rates would produce an anisotropic driving force; thus, the two tips would have different lifting directions and rollup from opposite directions; this caused the two opposing tips to form two independent microhelices. Then, the two sides met at the point of strongest interfacial adhesion causing the two microhelices to combine into one single microhelix, as shown in Figure 1(D-IV). When the roll-up process was finished, the pattern became a coil, as shown in Figure 1(D-V). The cross-linked photoresist, which was immersed in the 80°C NMP solution, continued to swell until it reached maximum volume, at which point the polymer network structure broke down and slowly dissolved in the NMP solution. The photoresist sacrificial material took about two days to be completely removed, leaving only the nickel layer. Without the constraint from the photoresist sacrificial material, the coil was loosened into a helix with a single layer of nickel, as shown in Figure 1(D-VI); this final structure is representative of the magnetic helical microrobots.

According to Bell et al, (2006), if the orientation of a nanomembrane strip deviates from the rolling direction, a helical structure can be formed. In our experiments, we observed that the photoresist rolled perpendicular to the short side, which is in agreement with the experimental observation and theoretical results of Chun et al, (2010). The orientation of the photoresist in a parallelogram pattern deviated from the rolling direction; thus, the parallelogram patterns are prone to roll up into helical structures after swelling.

During wet etching, the photoresist absorbed the NMP molecules and swelled. The swelling of the photoresist induced strain in the metal layer, which caused the structures to roll up into coils. The outer layer photoresist of the coils would dissolve eventually, and the metal layer was left to constitute the helical microrobots. Therefore, the microrobots are comprised of a single layer of nickel. A mathematical model (Li et al., 2012b) is included to relate the radius of the rolled-up structures with the swelling of the photoresist. The radius R of the rolled-up structure is given by the following equation:

The swimming properties of helical microrobots with different helical parameters were tested in deionized water under the actuation of a rotating magnetic field (RMF). The detailed swimming test procedures and the mechanism of the magnetic coil system can be found in the Supplementary Material S1. Figure 3A shows the time-sequence swimming of the helical microrobot fabricated through the parallelogram templates with the length of 300 μm and tilt angles of 60° under the rotational frequency of 4 Hz. The forward swimming speed of the helical microrobots is plotted against rotational frequency, as shown in Figures 3B,C. Each data point represents the average speed of five microrobots and the respective error bars represent the standard deviation. The results indicate a linear relationship between forward swimming speed and rotational frequency. 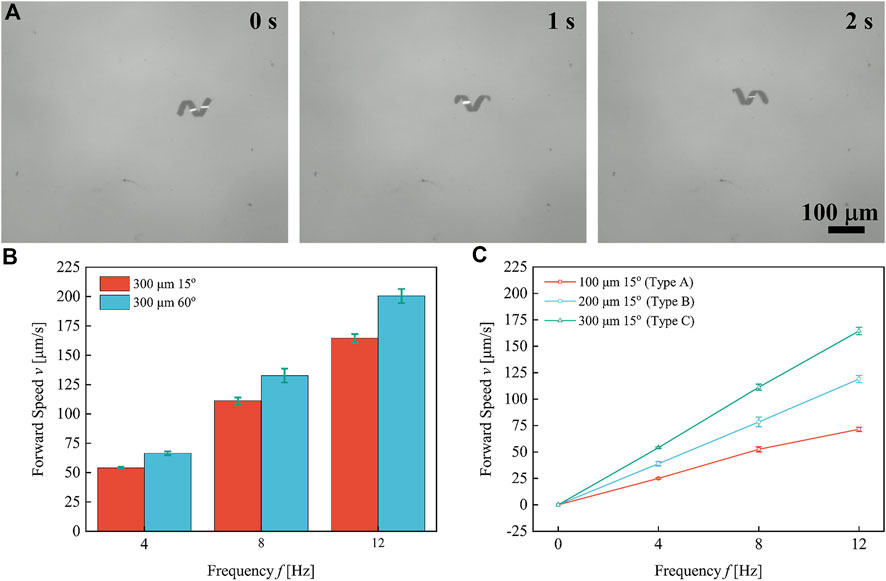 The speed of the helical microrobots as a function of geometric parameters and rotational frequency is expressed as (Tottori et al., 2012)

To verify the steerability of a helical microrobot, a microrobot was steered to swim along pre-programmed tracks to write out the word HELIX (see Figure 4 and Supplementary Video S2). While the microrobots are swimming close to the substrate, the hydrodynamic interaction with the surface causes drifting motion that leads to a deviation from the intended swimming direction (Peyer et al., 2010). To account for this, a feedback control strategy was applied to the microrobot’s motion control to compensate for the deviation from the intended path (Cheang et al., 2017). The implementation method is described in the Supplementary Material.

FIGURE 4. The trajectory of a helical microrobot following pre-programmed tracks.

Compared with the self-scrolling method, our fabrication method does not require multiple-layer deposition, and it can be realized in four steps using commonly available equipment. For GLAD, DLW, and TAE, a specialized deposition machine or a high-performance laser lithography system is required, which may hinder basic research on helical microrobots due to the availability of equipment. Using two-photon polymerization (TPP) methods (including DLW and TAE), each robot must be created one by one. Thus, research work using TTP to create helical microrobots might be hindered by time and cost. While TTP has obvious advantages in terms of material and precision control over geometrical features, the fabrication method in this work can present an alternative means to obtain helical microrobots using a parallel fabrication process with the advantages of low cost, high throughput, and equipment availability. For BTS, natural helical biotemplates can be acquired from various sources such as spiral xylem vessel plant fibers, helical microorganisms (such as Spirulina), and lotus-root fibers. Biotemplates need to be carefully prepared to avoid damage and have geometrical variations among structures. Although the researchers did not represent quantitative data to verify the consistency of the helical microrobots fabricated via this method, control over the helical parameters of the biotemplates can be challenging due to the mechanical isolation processes and ductile properties of the biological materials. In the case of the flagellar biotemplated microrobots, for instance, flagella obtained from live bacteria vary in length and are easily deformable during the biotemplating process, leading to variations in the helical structures (Ali et al., 2017). Thus, the popularity of this method is limited by either inconsistent structures or low geometry controllability. On the contrary, our helical microrobots consist of a nickel layer, and they can keep the intact helical shape during the fabrication process. Therefore, our proposed method may bring about two positive contributions: (1) the low resource investment may promote basic research on helical microrobots, and (2) the low cost and high throughput technique may be useful in the future for applications that requires a large number microrobots.

The authors would like to acknowledge the technical support from the SUSTech Core Research Facilities (SCRF).

The Supplementary Material for this article can be found online at: https://www.frontiersin.org/articles/10.3389/frobt.2022.1063987/full#supplementary-material

Copyright © 2022 Wang, Mu, Tan, Zhong and Cheang. This is an open-access article distributed under the terms of the Creative Commons Attribution License (CC BY). The use, distribution or reproduction in other forums is permitted, provided the original author(s) and the copyright owner(s) are credited and that the original publication in this journal is cited, in accordance with accepted academic practice. No use, distribution or reproduction is permitted which does not comply with these terms.

New Challenges and Future Perspectives in Nano and Micro Robotics