To accomplish translational research for drought tolerance in flax, no genomic data are available from any drought tolerant cultivar. Also, information related to gene expression profiling in flax is limited. This is the first report of high resolution transcriptome data from a moderately drought tolerant flax cultivar of an Indian origin. This dataset will be a cardinal genomic resource in annotating and understanding the genes and the intrinsic pathways involved in drought tolerance in flax. The data will further help to identify transcripts that are detectable under normal growing conditions encompassing different stages of flax growth as well as identifying genes involved in warding off drought at vegetative as well as reproductive stages in flax. It can also be used for gene discovery and/or comparative transcriptome analysis with the other related species. Besides being a useful resource for delineating the molecular basis of drought tolerance in flax, the inherent information can be used by plant breeders in flax breeding strategies.

Seeds of linseed variety T-397 were obtained from project coordinating unit (Linseed), Kanpur, India. Seeds were sown in 25 cm diameter plastic pots filled with mixture of peat soil, vermiculite, and river sand in 1:1:1 ratio. The seed-laden pots were kept in dark for 3 days. After germination, the pots were shifted to tissue culture room having 12 h photoperiod and 24°C/18°C (day/night) temperature. Shoot tissues were collected from 20 d old five independent plants with three biological replications while bud and inflorescence tissues were collected in a similar manner after onset of flowering (60 d). Same tissue types from 15 independent plants were pooled to represent a homogenous sample. All the tissues were frozen in liquid nitrogen before storing at −80°C.

The transcriptome assembly has turned out to be a method of choice for the discovery and characterization of novel transcripts involved in diverse pathways in eukaryotes (Wang et al., 2009; Surget-Groba and Montoya-Burgos, 2010). Availability of next generation sequencing technology has expedited identification and characterization of genes based on transcriptome approach in several crops. As a first step toward identifying drought specific genes, RNA-seq library in flax was prepared from the pooled samples of shoot, bud, and inflorescence. A total of 47,004,561 paired end reads were obtained after quality filtering. The cleand reads were obtained by filtering raw reads by removing adapters, low-quality, and ambiguous reads. Pre-assembly statistics of raw reads along with distribution of contigs and contigs length is presented in Table 1. The mapping statistics of high quality filtered data obtained are presented in Table 2. The GC content of the assembled data was 44.94% while 55.06% was AT content. 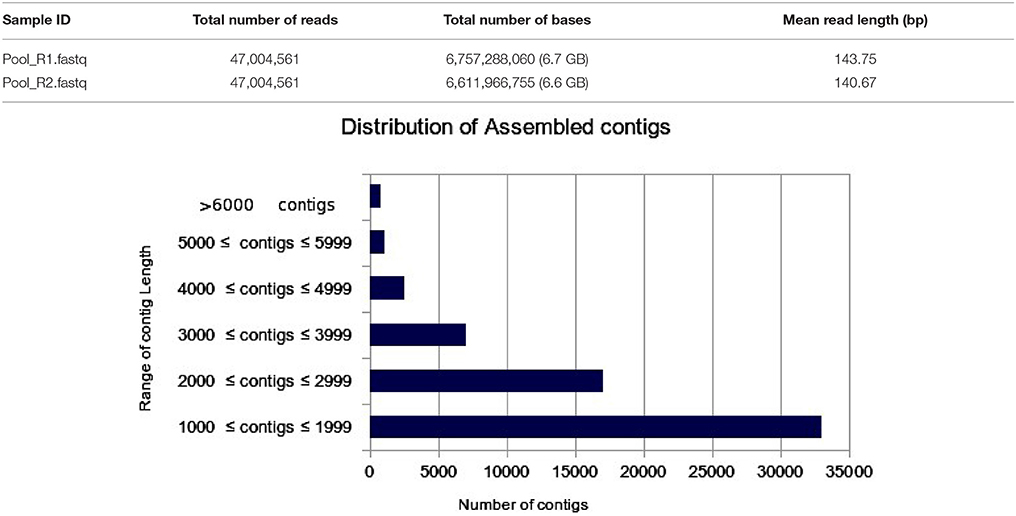 Table 1. Pre-assembly statistics of raw reads along with bar chart representing the distribution of assembled contigs with number of contigs in the X-axis and Range of contig length in the Y-axis. 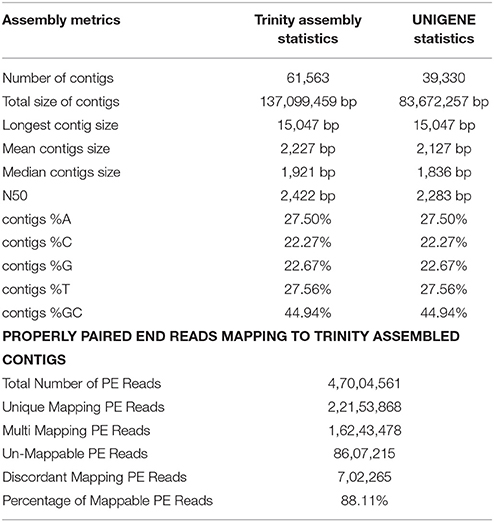 Table 2. Statistics of de novo assembly and UniGenes along with mapping statistics of L. usitatissimum transcriptome.

The filtered data assembled using Trinity software (Grabherr et al., 2011) resulted in 61,563 transcript contigs with N50 value of 2.4 kb, with average length of 1.9 kb. The transcripts were further analyzed using Cluster Database at High Identity with -EST i.e. CD-HIT_EST software (Nakasugi et al., 2013). A total of 61,563 transcripts were clustered into 39,330 UniGene's using CD-HIT-EST (Li and Godzik, 2006; Nakasugi et al., 2013). The clustered UniGene's has average length of 1.8 kb with N50 value of 2.2 kb and. Subsequently, 52,678 CDS were identified using transdecoder from 39,330 UniGene's. The statistics of transcriptome assembly and UniGene prediction are represented in Table 2. Assessment of transcriptome assembly was accomplished using unigenes formed after clustering. Subsequently, Bowtie2 was used to align the HQ reads on unigenes and the mapping statistics are represented in Table 2. Our result revealed that out of 47,004,561 PE reads 88.11% are mapable pairs reflecting the high quality of the de novo generated assembly. While, 22,153,568 are unique mapping reads; 16,243,478 reads mapped to multiple sites and 8,607,215 reads were un-mapable. The discordant/unmapable reads most likely correspond to low expressed transcripts/unsatisfactory coverage or are of aberrant nature.

Link to Deposited Data and Information to the User

Transcriptome profile of L. usitatissimum was generated from the polyA-enriched cDNA library prepared by pooling equal amount of total RNA extracted from shoot, flower and buds separately. The short reads were filtered, processed, assembled, and analyzed as described in the previous section. The complete data from the current study was submitted at NCBI under the BioProject ID PRJNA338739. The raw data for this project were deposited at SRA database at NCBI with the accession number SRR4034646 (http://www.ncbi.nlm.nih.gov/sra/SRR4034646). Users can download and reuse the data for research purpose with an acknowledgment and by quoting this paper as reference to the data.

This is the first report of a transcriptome dataset of an Indian flax cultivar T-397. We used next-generation RNA sequencing of leaf, shoot, bud, and flowering inflorescence to identify the genes involved in intrinsic drought tolerance in this cultivar. The data can be further used for identifying SSR loci and markers to be used in flax improvement program specific to drought tolerance.

PD and RR conceived the study, performed the experiments, analyzed the data with help from AM, KG, and NS. PD wrote the manuscript with input from all authors. All authors read and approved the manuscript.

The authors thank Dr. Rohini Sreevathsa for critical reading of the manuscript. Work was carried out under ICAR-NPTC and in-house RPP theme.

Copyright © 2017 Dash, Rai, Mahato, Gaikwad and Singh. This is an open-access article distributed under the terms of the Creative Commons Attribution License (CC BY). The use, distribution or reproduction in other forums is permitted, provided the original author(s) or licensor are credited and that the original publication in this journal is cited, in accordance with accepted academic practice. No use, distribution or reproduction is permitted which does not comply with these terms.