School of Pharmacy, Faculty of Medicine and Health, The University of Sydney, Australia

The use of synthetic macromolecules for biological and medicinal applications has always been a popular approach (Yin et al., 2021). Accordingly, several studies have demonstrated the non-toxic and biocompatible nature of synthetic cucurbiturils (CBs) (Uzunova et al., 2010; Zhang et al., 2018). CBs are molecular containers comprising two hydrophilic carbonyl-lined portals with a central hydrophobic cavity. They have been synthesized in different sizes (Figure 1 for cucurbit[7]uril [CB7]) (Lee et al., 2003). Because of these properties, the bioactivity of the CB7 host–guest complexes (Cheng et al., 2018) and their clinical applications in vitro and in vivo have been confirmed by several studies. For example, a previous study revealed that CB significantly decreased the hepatotoxicity caused by nitidine chloride (Li W. et al., 2017) as well as trazodone and its metabolite m-chlorophenylpiperazine (Huang et al., 2018a). Further, the antidotal activity of CB7 against paraquat, a toxic pesticide, was observed both in vitro and in vivo (Zhang et al., 2019a,b). Another study reported that a high affinity between CB7 and sorafenib, an anticancer drug (Yang et al., 2017), and bedaquiline (Kuok et al., 2018) and clofazimine (Li et al., 2016), antituberculosis drugs, enabled the host to decrease the cardiotoxicity of these drugs without affecting their activity in vitro and in vivo in zebrafish models (Yang et al., 2017). In the same year, it was reported that CB reduced the neurotoxicity of pentylenetetrazol in zebrafish and mouse models (Huang et al., 2018b). Additionally, acyclic CB derivatives were shown to have antidotal activity against methamphetamine in rats (Ganapati et al., 2017). 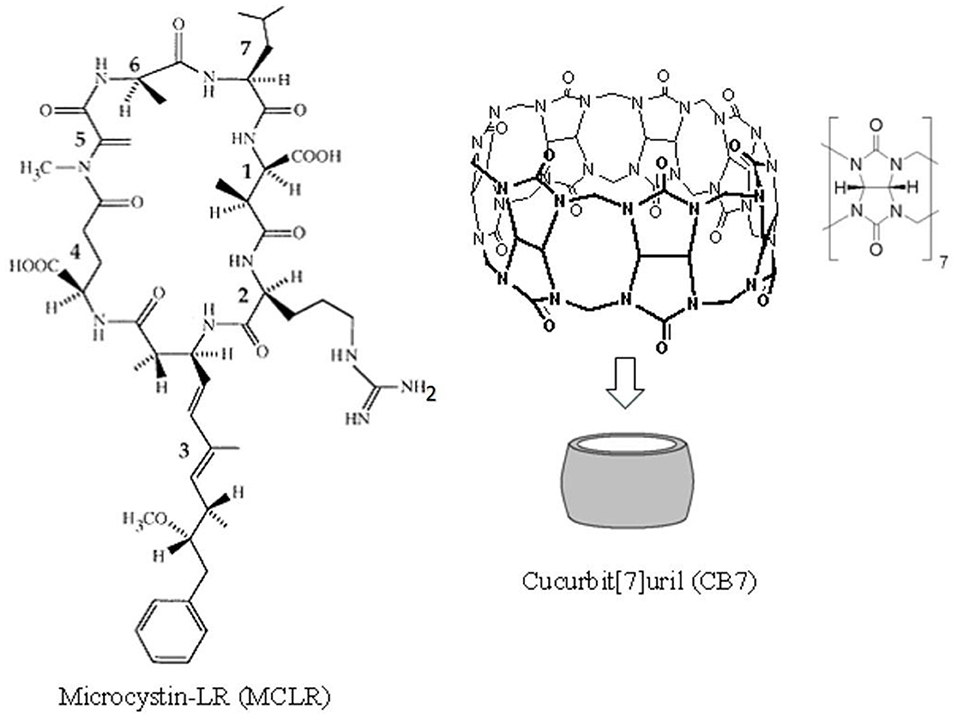 Although several macrocyclic hosts have been used to reverse the effects of poisonous substances (Yin et al., 2021), CB7 as an antidote to the toxicity of cyanobacterial crude extract (CCE) has been validated in in vivo studies. Cyanobacteria produce a wide range of cyclic peptide hepatotoxins, such as microcystins and nodularin. These secondary metabolites of cyanobacteria can be detected both in freshwater and marine environments. Figure 1 presents the chemical structure of microcystin-LR (MC-LR), a predominant toxin in CCE, as an example (Dittmann and Wiegand, 2006). Cyanobacteria are responsible for wildlife fatalities and adverse health effects in humans in countries where drinking water supplies are contaminated with these microorganisms (Al-Jassabi, 2005). Alarmingly, some of these cyanobacterial toxins are powerful promoters of liver tumor and potent inhibitors of protein phosphatase 1 (PP1) and PP2A catalytic subunits (PP1c/PP2Ac) that are critical for cytoskeletal integrity (Goldberg et al., 1995). During cyanobacterial bloom lysis in aquatic ecosystems, a mixture of toxins and other cyanobacterial and bacterial components are released in the water, which affects various aquatic organisms.

In this study, we analyzed the effects of CCE on liver function in mice with and without CB7 co-administration. Previous studies reported that the maximum tolerated dosage of CB7 is 250 mg/kg in mice, which is at least three-fold less than its LD50 (Uzunova et al., 2010). The LD50 of CCE in this study was 35 mg/kg body weight intraperitoneally (i.p.). International guidelines permit the analysis of doses at least 20-fold less than the LD50 of CB7 to evaluate its protective activity, which justifies the use of CB7 as an antidote agent at a dose of 35 mg/kg body weight.

All chemicals were purchased from Sigma-Aldrich. To calculate the CB7 concentrations, the water content in the bottle was assumed to be 20%, as stated by the supplier.

Different sites of the King Talal reservoir, Jordan, were targeted as sources of Microcystis aeruginosa during summer (May to October). We followed previously reported methods for isolating the cells and culturing them in medium (Dittmann and Wiegand, 2006). During cultivation, freeze-dried cells were used to extract cyanobacterial toxins using the method introduced by Mazur and Plinski (2003). To determine the LD50 of the extracted toxin, we followed the method reported by (Fawell et al., 1999).

We used 5–7-week-old male BALB/c mice (average weight, 30 g). Mice were obtained from the animal house unit of the Yarmouk University and were housed in stainless metal cages, with ad libitum access to food and tap water for the duration of the study. The animals were maintained on a 12/12-h light–dark cycle at a temperature of 23–26°C. The Animal Care and Use Committee at Yarmouk University approved the study procedure.

The mice were divided into four groups of 10 animals each. Group 1 (control) received only a single 0.5-mL i.p. dose of physiologic saline (neutral pH); group 2 received CB7 injection (35 mg/kg); group 3 received free toxin CCE (35 mg/kg), and group 4 received both the toxin and CB7 (35 mg/kg each). Mice were sacrificed after 24 h. A second set of experiments (groups 5–8) was performed in which the mice received i.p. injections of CB7 aqueous solutions (2–100 mg/kg) at physiological pH (10 mice for each concentration).

To assess the activities of alanine aminotransferase (ALT) and glutathione S-transferase (GST), blood was collected from the animals and the serum was stored at −70°C. The excess blood was then removed by perfusing the liver with Hanks' balanced salt solution. The IKA Ultra-Turax homogenizer was used to homogenize liver tissues in phosphate-buffered saline (pH 7.2). The supernatant in the centrifuged homogenate was stored at −70°C to measure PP1 activity and lipid peroxidation (LPO).

To measure ALT activity in the serum samples, we followed the method outlined previously by Gehringer et al. (2003).

GST (EC 2.5.1.18) activity was measured in the liver homogenate using 1-chloro-2,4-dinitrobenzene as a substrate according to the method outlined by Habig et al. (1974).

To determine the activity of PP1, the kinetics of the generation of a yellow product from the dephosphorylation of para-nitrophenyl phosphate was estimated using a spectrophotometer, as described by Yuan et al. (2006).

All results were expressed as mean ± standard error of the mean (SEM) for 10 mice per group. One-way analysis of variance followed by Tukey's post-hoc test was used to determine the significance of differences between the groups. Statistical significance was indicated by a P of ≤ 0.05. All statistical analyses were performed using SigmaStat statistical software (version 3.5).

Twenty-four hours after the i.p. injection, a significant increase in the liver mass was observed in group 3 (Figure 2 and Table 1) compared with group 1 (1.44 vs. 2.77 g; P < 0.05). This increase was attributable to massive intrahepatic hemorrhage and the pooling of blood in the liver (data not shown). CB7 alone (Table 2) did not significantly affect the liver mass (P > 0.05). However, co-administration of CB7 and CCE significantly nullified the increase in liver mass that was seen in group 3 (1.88 vs. 2.77 g; P < 0.05), which implies a protective effect of CB7 on CCE-induced liver enlargement. 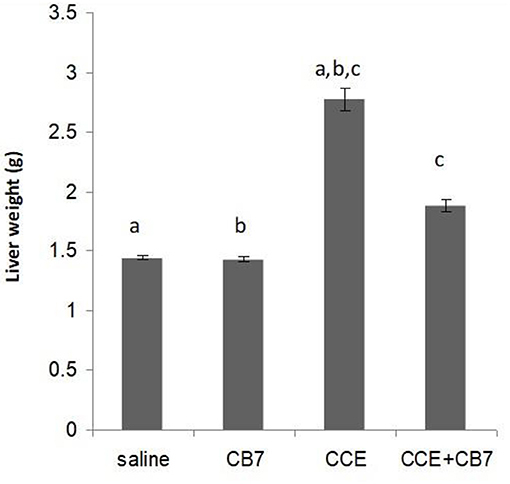 Figure 2. Effects of cucurbit[7]uril (CB7) on cyanobacterial crude extract (CCE)-induced liver damage. Mice were divided into groups 1–4 and the livers from mice in each group were weighed. Data are presented as mean ± SEM. Bars with similar letters represent statistically significant differences. Ten mice per group (n = 10).

Table 1. Effects of microcystin-LR on the liver function of BALB/c mice in the presence and absence of cucurbit[7]uril (CB7); 10 mice per group (n = 10).

Figure 3. (A) The activity of alanine aminotransferase (ALT) and (B) glutathione S-transferase (GST) in the livers of mice in each group. Data are presented as mean ± SEM. Bars with similar letters represent statistically significant differences. Ten mice per group (n = 10). 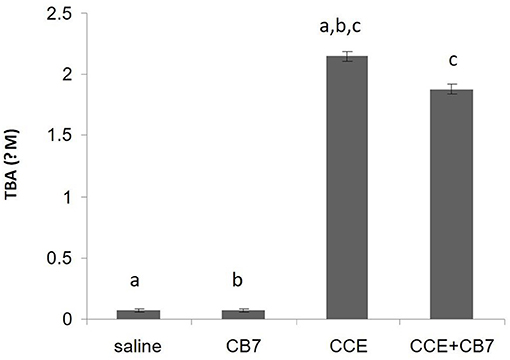 Figure 4. Levels of thiobarbituric acid (TBA), which is indicative of lipid peroxidation, calculated from the livers of mice in each group. Data are presented as mean ± SEM. Bars with similar letters represent statistically significant differences. Ten mice per group (n = 10). 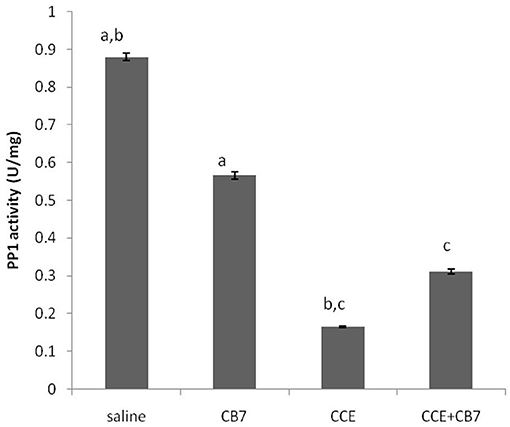 The safety and toxicity of CB7 in mice were further tested and validated. The results revealed the absence of any significant changes in various biochemical markers of hepatic function (Table 2).

The present study illustrated that CB7 can serve as a chemoprotectant and can effectively diminish CCE-induced liver damage in mice. This is the first report that demonstrated the protective role of CB7 against CCE-induced liver damage. Our results show that CCE induced liver enlargement resulting from massive intrahepatic hemorrhage, which is consistent with previous findings that MC-LR inhibits PP1, a serine/threonine phosphatase (Honkanen et al., 1990). Inhibition of PP1 is known to increase cytoskeletal protein phosphorylation (Ohta et al., 1992), thereby disrupting the liver cytoskeleton (Hooser et al., 1989, 1991). Our observation that CB7 alone reduced PP1 activity without affecting liver size suggests that the hyperphosphorylation of cytoskeletal proteins was not sufficiently robust to significantly disrupt the integrity of hepatic cells. However, the detailed mechanism of such interactions remains to be investigated, especially considering that the crude extract contains several other components. In fact, the low water solubility of the crude sample precludes a nuclear magnetic resonance measurement that is necessary to determine the site or mode of interactions. It is also notable that CB7 is not entirely soluble in organic solvents (Uzunova et al., 2010). Therefore, regardless of the chemical tool used, the binding patterns can only be studied by monitoring the interaction of CB7 containers with standard MC-LR (Harada et al., 1990).

ALT is a routinely used clinical indicator of hepatocellular injury. The present study illustrated that CB7 protects mice against CCE-induced liver damage by reducing ALT activity upon the coadministration of CB7 and CCE. Similar results were observed for GST, a phase II detoxification enzyme, which was also revealed to detoxify MC-LR (Pflugmacher et al., 1998). Taken together, these observations clearly indicate the protective role of CB7 against CCE-induced liver damage.

The pharmacokinetic profile of CB7 has already been studied both in Balb/c mice and in Sprague Dawley rats after i.p. or i.v. administration, respectively. The i.p. plasma clearance in mice fits a 2-compartment model with exponential decay profile, where clearances of t1/2α = 17.0 min and t1/2β = 270.7 min are noted. Likewise, in Sprague Dawley rats, i.v. administration appeared to follow a multiphasic clearance model. Bio-distribution of CB7 in mice following i.p. administration show detection in the spleen, liver and brain 10 min post-administration, while activity in the kidneys occurred in two phases, at around 20 and 180 min. Due to this significantly higher activity in the kidneys (compared to that in liver), it was suggested that CB7 is excreted from the kidneys unchanged. It is worth mentioning that low levels of CB7 accumulate in the spleen and liver compared with the plasma and kidneys, while the brain accumulates the least activity, likely indicating that CB7 in unlikely to be able to cross the blood brain barrier (Li F. et al., 2017).

Based on the biochemical examination of the extracted livers of mice following CCE treatment with or without CB7, CB7 reduced the toxicity of CCE in vivo. The use of chemoprotectants against M. aeruginosa cyanobacterial toxicity has been the subject of several studies. However, the novelty of the present study lies on the use of a synthetic organic receptor instead of free radical scavengers, Ca2+ channel blockers, or enzyme inducers (Hermansky et al., 1991; Atencio et al., 2009). We demonstrated the potential application of CB7 as an adjuvant in toxicological pharmacology.

The animal study was reviewed and approved by Animal house unit of Yarmouk University.

NS created the idea and wrote the final draft. NS and SA-J conducted all experimental work. AE and WN evaluated the final draft and added more references. All authors contributed to the article and approved the submitted version.

Copyright © 2021 Saleh, Al-Jassabi, Eid and Nau. This is an open-access article distributed under the terms of the Creative Commons Attribution License (CC BY). The use, distribution or reproduction in other forums is permitted, provided the original author(s) and the copyright owner(s) are credited and that the original publication in this journal is cited, in accordance with accepted academic practice. No use, distribution or reproduction is permitted which does not comply with these terms.