A new electrically conducting 3D metal-organic framework (MOF) with a unique architecture was synthesized using 1,2,4,5-tetrakis-(4-carboxyphenyl)benzene (TCPB) a redox-active cis-dipyridyl-tetrathiafulvalene (Z-DPTTF) ligand. While TCPB formed Zn2(COO)4 secondary building units (SBUs), instead of connecting the Zn2-paddlewheel SBUs located in different planes and forming a traditional pillared paddlewheel MOF, the U-shaped Z-DPTTF ligands bridged the neighboring SBUs formed by the same TCPB ligand like a sine-curve along the b axis that created a new sine-MOF architecture. The pristine sine-MOF displayed an intrinsic electrical conductivity of 1 × 10−8 S/m, which surged to 5 × 10−7 S/m after I2 doping due to partial oxidation of electron rich Z-DPTTF ligands that raised the charge-carrier concentration inside the framework. However, the conductivities of the pristine and I2-treated sine-MOFs were modest possibly because of large spatial distances between the ligands that prevented π-donor/acceptor charge-transfer interactions needed for effective through-space charge movement in 3D MOFs that lack through coordination-bond charge transport pathways.

Preparation of I2 Doped sine-MOF

The dark-red colored evacuated sine-MOF powder was placed in a small open vial, which was then placed inside a larger screw-capped vial containing few I2 chips. The larger vial was capped tightly and sealed with parafilm tape to keep the sine-MOF crystals exposed to iodine vapor for 3 days, which caused the sine-MOF powder to turn black. The I2-treated sine-MOF vial was removed from the I2 chamber, left open overnight, and finally washed thoroughly with hexane until the washing solution became colorless indicating that the material was free of any physisorbed I2. Elemental analysis: Calc. for Zn2C55H50O14S4N2I1.5: C 46.77, H 3.57, S 9.08%, and I 13.48. Found: C 46.97, H 2.80, S 8.24, and I 13.44%.

A solvothermal reaction between Zn2(NO3)2•6H2O, TCPB, and Z-DPTTF in a DMAc/H2O mixture at 80°C for 24 h yielded dark-red sine-MOF crystals. SXRD analysis revealed that sine-MOF [Zn2 (DPTTF)TCPB•3DMA]n crystallized in an orthorhombic space group Pnma (Figures 1A,B and Supplementary Figure S1). The TCPB ligands formed Zn2(COO)4 paddlewheel nodes, but unlike typical pillared paddlewheel MOFs, they did not form 2D sheets of these nodes in sine-MOF. Instead, they formed a 3D framework thanks to a significant twist of TCPB ligand, which was evident from large dihedral angles (ca. 43–47°) between the central benzene ring and terminal benzoate rings. The axial sites of the Zn2(COO)4 paddlewheel nodes were occupied by Z-DPTTF ligands, although these dipyridyl ligands did not act as typical pillars found in pillared paddlewheel MOFs. Instead, each U-shaped Z-DPTTF ligand bridged two adjacent Zn2 nodes formed by two 1,3-benzoate groups of the same TCPB ligand. Each Zn2 paddlewheel node carried one U-shaped Z-DPTTF ligand at the top axial position and another at the bottom axial position, which then bridged two adjacent Zn2 nodes from the top and bottom axial positions, respectively. Thus, the consecutive Zn2 nodes located along the b-axis were connected by U-shaped Z-DPTTF ligands in an alternating top/bottom fashion that resembled a full sine-wave (Figure 1C), prompting us to label this new architecture as sine-MOF. The formation of this uncommon architecture was made possible by the bent geometry of Z-DPTTF ligands having an angle of 36° between the two dithiolene rings and a dihedral angle of 10° between two cis-pyridyl rings. The bent geometry and short central C=C bond length (1.34 Å) of Z-DPTTF indicated that they existed in the neutral form in pristine sine-MOF (Gao et al., 2014; Su et al., 2017). Due to an alternate up/down orientation of Z-DPTTF ligands, sine-MOF lacks intermolecular π–π and S•••S interactions between the TTF cores, but it enjoys π–π interaction between the dithiolene rings of Z-DPTTF and two benzoate rings of TCPB ligand that have a centroid-to-centroid distance of 3.66 Å (Supplementary Figure S2).

FIGURE 1. (A) Crystal structure of sine-MOF [Zn2 (DPTTF)TCPB•3DMA]n viewed along the c axis. (B) The paddlewheel-like SBUs formed by the TCPB ligands are connected by axially coordinated U-shaped Z-DPTTF ligands extended along the b-axis. (C) A view of the sinusoidal thread formed by Z-DPTTF ligands by bridging adjacent SBU units along the b axis and the π-π interactions between the dithiolene rings of the TTF core and two benzoate moieties of the TCPB ligand with a centroid-to-centroid distance of 3.66 Å. Solvent molecules and H atoms are omitted for clarity. Atom legends: cyan, Zn(II); blue, N; red, O; yellow, S; and gray, C.

The experimental powder X-ray pattern (PXRD) of pristine sine-MOF was consistent with the simulated one obtained from the SXRD analysis, which confirmed the phase purity and crystallinity of the evacuated bulk material (Figure 2). Iodine is a mild oxidant that is known to chemically oxidize TTF and other electron rich π-systems (Su et al., 2017; Gordillo et al., 2020). Exposure of pristine sine-MOF crystalline powder to I2-vapors afforded a black material that was washed thoroughly with hexanes until the wash solution became colorless indicating that no residual physisorbed I2 was left in the I2-treated sine-MOF. The PXRD pattern of the I2-treated sine-MOF matched with that of the pristine material, confirming the retention of its structural integrity and crystallinity (Supplementary Figure S3). 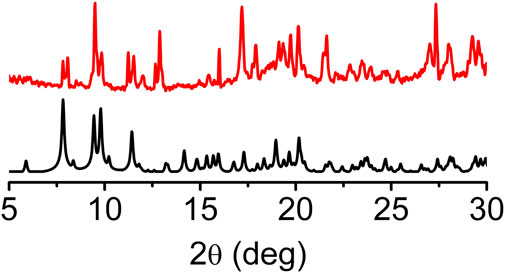 FIGURE 2. PXRD pattern of pristine sine-MOF showing retention of the crystallinity after activation.

Thermogravimetric analysis (TGA) was performed on vacuum-dried pristine and I2-treated sine-MOF samples in N2 atmosphere (Figure 3). The TGA profile of pristine sine-MOF revealed a gradual 10% weight loss until 300°C corresponding to the loss of solvent molecules, followed by a sharp 33% weight loss due to framework decomposition. The TGA profile of the I2-doped sine-MOF displayed an initial weight loss of 14% corresponding to the loss of MeOH and water molecules, followed by another significant weight loss step above 400°C that corresponded to framework decomposition. 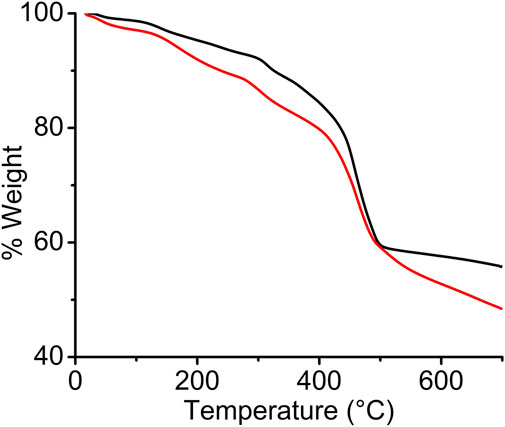 Optical and Electrochemical Properties of sine-MOF

The diffuse reflectance spectra (DRS) of pristine and I2-doped sine-MOFs were measured. Pristine sine-MOF displayed a broad band centered on 480 nm, which was ca. 60 nm red-shifted with respect to the UV-vis absorption spectrum (λmax) of Z-DPTTF recorded in DMF (Figures 4A,B). From the onset of the λmax peak of the Z-DPTTF ligand its optical bandgap of 2.3 eV was calculated. The optical bandgaps of pristine and I2-treated sine-MOFs (Eg = 1.8 and 1.2 eV, respectively) (Figure 4B) were narrower than that of the free ligand, probably because of π–π and π-donor/acceptor interactions between the Z-DPTTF and TCPB ligands in pristine and I2-treated wavy MOFs, respectively. The results from the corresponding Tauc plot (Figure 4C) were in good agreement with those determined from DRS and revealed ∼0.6–0.7 eV narrower bandgap for the I2-doped sine-MOF with respect to the pristine MOF. The narrower bandgap of I2-treated sine-MOF is likely due to a partial oxidation of the Z-DPTTF ligands to Z-DPTTF•+ radical cations within the framework.

Solid state cyclic voltammetry (CV) (Figure 5) and square wave voltammetry (SWV) (Supplementary Figure S4) were used to investigate the redox properties of sine-MOF. TTF compounds are known to display two reversible one electron oxidation steps corresponding to TTF•+ and TTF2+ formation. The CV of pristine sine-MOF displayed two quasi-reversible oxidation processes (Figure 5A) with anodic peaks at 0.68 and 0.96 V (vs Ag/AgCl, 0.1 M Bu4NPF6 in MeCN) corresponding to stepwise one-electron oxidation of Z-DPTTF to Z-DPTTF•+ and Z-DPTTF2+. The anodic peaks of I2-doped wavy-MOF (Figure 5B) appeared toward more positive potentials at 0.79 and 1.05 V suggesting that such I2-mediated partially oxidized framework was more difficult to oxidize electrochemically than pristine sine-MOF.

Solid-state electron paramagnetic resonance (EPR) confirmed the presence of Z-DPTTF•+ radical cations within the sine-MOF. A weak EPR signal (Figure 6) was present in pristine sine-MOF indicating that most of the Z-DPTTF ligands were in the neutral state and that a small percentage may have been oxidized by air as has been previously reported for other TTF-based MOFs. (Narayan et al., 2012; Park et al., 2015; Su et al., 2017; Wang et al., 2017a; Leong et al., 2018). In contrast, a strong EPR signal (g ≈ 2.006) was observed (Figure 6) for I2-treated sine-MOF indicating that a significant population of Z-DPTTF ligands were oxidized to paramagnetic Z-DPTTF•+ radical cations. The elemental analysis data of I2-treated sine-MOF (vide supra) corresponded to an empirical formula of Zn2C55H50O14S4N2I1.5. Based on the I/S ratio, we estimated that there was roughly one I3− anion for two DPTTF ligands (each DPTTF has four S atoms), meaning that approximately half of the DPTTF ligands were partially oxidized to DPTTF•+ radical cations, which were accompanied by an equal number of I3− counterions for charge balance. Furthermore, based on the empirical formula and quantitative EPR analysis, we estimated that the pristine sine-MOF possessed 6.8 x 1013 spins/mg or 7.6 x 1019 spins/mol, which corresponded to only 0.01% DPTTF•+ population (possibly produced by negligible aerobic oxidation). In contrast, the I2-treated sine-MOF possessed 2.6 x 1016 spins/mg or 3.6 x 1022 spins/mol, which corresponded to a noticeably higher 6.1% DPTTF•+ population. Thus, elemental analysis and quantitative EPR analysis together helped us quantify the DPTTF•+ population in the I2-treated partially oxidized sine-MOF. 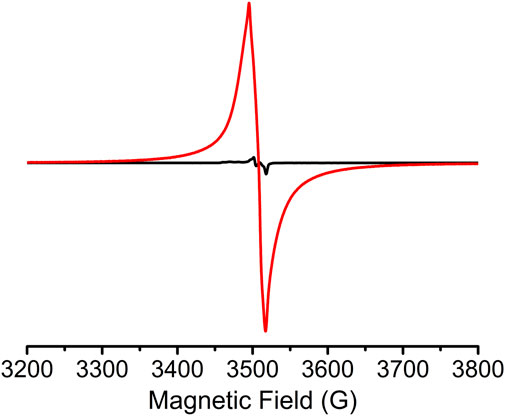 Finally, we measured the room temperature electrical conductivity of pressed pellets of pristine and I2-treated sine-MOFs, which provided us insights into the effect of partial oxidation of Z-DPTTF ligands in the latter. DC-sweep measurements of pressed sine-MOF-pellets sandwiched between two conductive stainless-steel electrodes coated with Ag paste were conducted. Both materials displayed linear current-voltage (I-V) responses between –1 and +1 V (Figure 7), confirming ohmic contact between the pellets and electrodes. From the slopes of the corresponding I-V curves, the electrical conductivity of pristine and I2-treated sine-MOFs was determined to be 1 × 10−8 and 5 × 10−7 S/m, respectively. The 50-fold higher conductivity of I2-treated sine-MOF was attributed to partial oxidation of Z-DPTTF ligands to Z-DPTTF•+, which enhanced the charge carrier concentration. However, the increase was modest and the conductivity was still lower than other I2-treated TTF-based MOFs possibly because sine-MOF lacked sufficient π–π or S•••S interactions between the Z-DPTTF ligands, which hindered through-space charge movement, while the Zn2 paddlewheel nodes were not conducive to through-bond charge movement. As result, pristine and I2-treated sine-MOFs likely relied on less effective charge hopping mechanism, which caused modest conductivities even though the latter possessed larger number of mobile charge carriers due to the presence of DPTTF•+ radical cations. 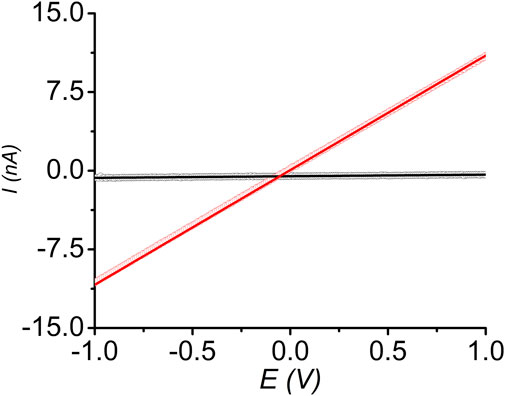 We have developed a new 3D sine-MOF structure featuring twisted TCPB ligands that formed Zn2(COO)4 paddlewheel nodes and axially coordinated U-shaped Z-DPTTF ligands that connected the adjacent nodes like sine-curves propagating along the b-axis. While the pristine sine-MOF displayed a modest intrinsic conductivity, its conductivity surged 50-fold to 5 × 10−7 S/m after iodine mediated partial oxidation of the electron rich Z-DPTTF ligands possibly due to enhanced charge carrier concentration. However, the lack of strong π–π- and S•••S interactions between the Z-DPTTF ligands hindered through-space charge movement, which was largely reliant on charge hopping, causing modest electrical conductivity of both pristine and I2-treated sine-MOFs. These studies not only presented a novel electronic MOF architecture, but also demonstrated that a high charge carrier concentration alone is not sufficient for high electrical conductivity unless a framework is also equipped with effective charge transport pathways.

The CIF of the sine-MOF can be found in the Cambridge structural database with deposition number 2101676. The CIF and all the other additional data can also be found in the Supplementary Material.

SS conceived and supervised the project, evaluated data, and edited the article. MG, PB, and KS conducted experiments and analyzed data. MG also wrote the initial draft of the article.

The Supplementary Material for this article can be found online at: https://www.frontiersin.org/articles/10.3389/fchem.2021.726544/full#supplementary-material

Copyright © 2021 Gordillo, Benavides, Spalding and Saha. This is an open-access article distributed under the terms of the Creative Commons Attribution License (CC BY). The use, distribution or reproduction in other forums is permitted, provided the original author(s) and the copyright owner(s) are credited and that the original publication in this journal is cited, in accordance with accepted academic practice. No use, distribution or reproduction is permitted which does not comply with these terms.