Background: Diabetes continues to be a serious disease burden globally. Nutrition plays a vital role in human life and health, and both inadequate and over nutrition have been implicated in cause the of disease.

Conclusion: Our study demonstrated that preference for high dietary salt intake is associated with undiagnosed diabetes but not prevalent diabetes.

Diabetes continues to be a serious disease burden in all countries. The risk factors and distribution has been extensively studied in the last half-century (1, 2). The risk factors for type 2 diabetes are broadly categorized into environmental and genetic causes. Of the environmental modifiable risk factors of type 2 diabetes, human nutrition plays a critical role in the development of the disease. The role of nutrients in the development of diabetes is linked to glucose metabolism, and this is as a result of the impairment of insulin regulation (3, 4). Red meat, processed meat, and sweetened beverages have been linked to increased risk of type diabetes (5).

Nutrition plays a vital role in human life and health, and both inadequate and over nutrition have been implicated in disease cause. Dietary salt is composed of sodium (Na) and chloride (Cl); Na is an essential element for the maintenance of fluid balance in humans (6), but higher intake of Na usually in the form of table salt is an established risk factor for cardiovascular diseases. Salt has been established to be associated with hypertension in many studies (7, 8), but the association between the intake of salt and diabetes has not received the same attention. The association of salt intake and diabetes has been suspected at least over the past five decades, when studies noted the susceptibility of desert rats to diabetes when they switched from the normal diet of desert vegetation (usually high in salt) to laboratory meals (9).

The World Health Organization (WHO) recommends a daily intake of sodium for adults to <87 mmol (<5 g of salt) and potassium intake to ≥90 mmol (≥3.5 g) per day (6, 10). In a recent meta-analysis and systemic review of salt consumption among Chinese in China, it was reported that China has the highest consumption of salt in the world nearly double the daily dietary recommended intake, the study further revealed that the Henan province and most of central china have the highest salt intake in the country (11).

This study is a population-based survey study, and men and women 18–79 years in five rural counties (Suiping, Tongxu, Xinxiang, Yima, and Yuzhou counties) of the Henan province in China were invited to participate. Invitations were sent to adults aged 18–79 in July 2015 and September 2017, 39,259 participants accepted the invitation to participate.

In brief, the Henan province was divided into five clusters based on geography (Northern, Southern, Central, Western and Eastern) and five counties (one from each geographic zone) randomly selected using a simple random sampling procedure. The local health authorities in the geographic zones then selected 1–3 local villages based on the estimated population requirement for each cluster. All permanent adult residents of the selected villages were then invited to participate in the study. The design of this study has been previously described elsewhere (15).

Age, gender, education (categorized as; “less than high school,” “high school,” and “greater than high school”), marital (“married/cohabiting,” “widowed/divorced,” and “never married”), body mass index (BMI), dyslipidemia, hypertension, physical activity, smoking, and alcohol intake were the covariates adjusted for in the regression models. Dyslipidemia was defined using the IDF criteria for raised triglycerides, LDL-C, and reduced HDL-C or the use of lipid-lowering medications (2). Hypertension was considered if systolic blood pressure (SBP) measurement was >140 mmhg, diastolic blood pressure (DBS) >90 mmhg, or self-reported previous diagnosis of hypertension (17). BMI was categorized into three (normal weight, overweight and obese), and waist circumference (WC) into two (central obesity vs. no central obesity) using the WHO Asian population reference of BMI and WC for men and women (18).

Diabetes status was first converted into a binary variable for those with diabetes (both diagnosed and undiagnosed diabetes) and those without diabetes (normoglycemia and impaired fasting glucose). Binary logistic regression models were then fitted to assess the associations of diabetes and risk factors. The goodness of fit test was conducted to assess the suitability of models.

Diabetes status was further classified into three categories of impaired fasting glucose, diagnosed diabetes and undiagnosed diabetes based on the WHO guidelines (16). Multinomial regression models were then performed to ascertain the associations of diabetes diagnosis status (IFG, previously diagnosed and undiagnosed diabetes) and the reported preference for high dietary salt intake. Age, gender, dyslipidemia, BMI, physical activity, family history of diabetes, and hypertension were adjusted for in a second model. All models were fitted using complex survey design approach in stata. Akaike information criterion (AIC) and Bayesian Information Criterion (BIC) were then used to assess model suitability.

Previous studies have reported association between obesity and high dietary salt intake; we, therefore, performed mediation analyses to test the hypothesis that the association between preference for salty meals and diabetes may be mediated through obesity. Mediation analyses were performed using structural equation models (medsem command in STATA). Candidate mediating variables were BMI and waist circumference (WC) and covariates considered were age, gender, physical activity level, family history of diabetes, and dyslipidemia. The mediation hypothesis was tested using the Baron and Kenny approach modified by Laobuti et al. and the Zhao et al. approach (19, 20).

In all, 39,183 participants from the Henan rural cohort were included in this present analysis, after excluding four participants with type 1 diabetes and 72 participants younger than 20 years. Over 60% were women, the mean age of participants was 55.67 ± 12.10 years. The overall prevalence of diabetes was 9.87% (5.80% were previously undiagnosed). Over 80% of the participants had lower than high school education, nearly 90% were married or in stable relationships, and close to 70% were from households that earned <1,000 RMB per month. Details of participants' characteristics are presented in Table 1. 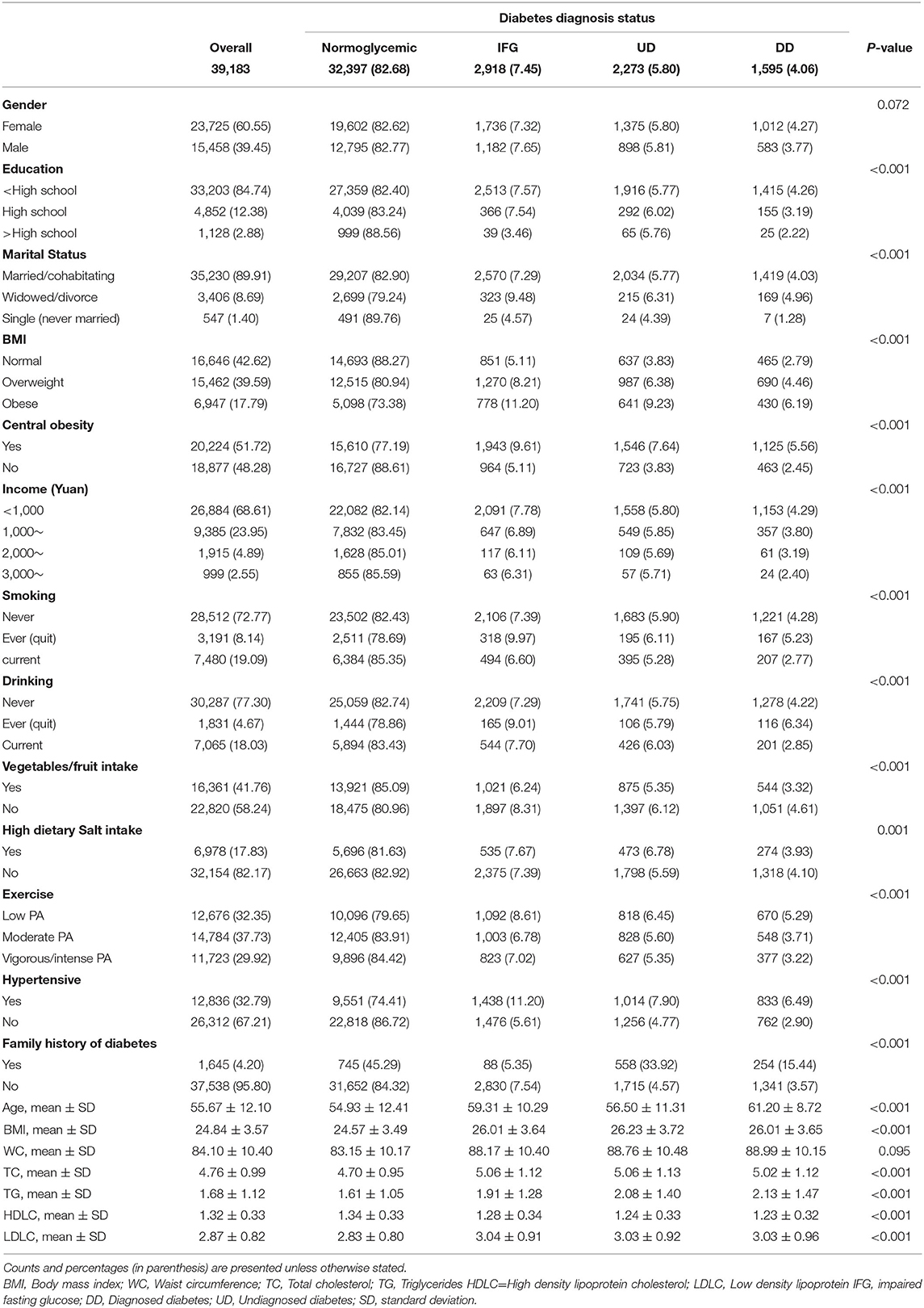 The reported prevalence of preference for high dietary salt intake was 18%, men, had a higher preference for salty meals compared to women. Additionally, participants with higher education, those who were overweight/obese, from households with high income, and currently drinking also reported high salty meals preference (Table 2).

Table 3. Binary logistic regression, association of salt and diabetes (both diagnosed and undiagnosed). 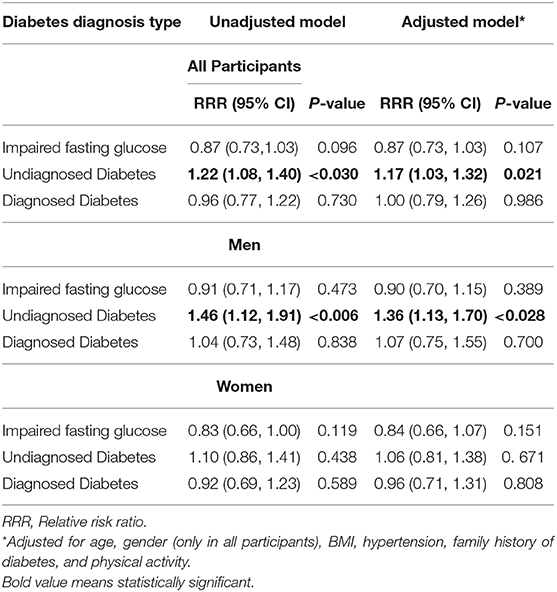 The association between undiagnosed diabetes and reported a preference for salty meals was fully mediated by BMI and waist circumference using both the Baron and Kenny approach and Zhao et al. method (see Supplementary Tables 4, 5).

Type 2 diabetes continues to be a significant global disease burden and the full understanding of the causes is still evolving. About one in ten of the participants at baseline in the Henan rural cohort had type 2 diabetes. Persons with type 2 diabetes had the classic risk factors reported in previous studies (2, 3); they were overweight/obese, more centrally obese, dyslipidemic, hypertensive, men, more likely to have had a family history of diabetes, and older compared to those without diabetes. There were a fairly equal number of prevalent type 2 diabetes and undiagnosed diabetes.

Preference for high dietary salt was positively associated with undiagnosed diabetes but not prevalent diabetes. The lack of association with prevalent diabetes may be attributable to the modification of lifestyle behavior following counsel from physicians/dieticians/nutritionists as patients with diagnosed diabetes are usually advised to limit dietary salt intake to lower their risk for cardiovascular diseases (21). In stratified analysis by gender, this association was only significant among men but not women. From our study population with undiagnosed diabetes, men had a 50% more preference for high dietary salt compared to women; this may partly explain the gender difference in associations of undiagnosed diabetes and preference for high dietary salt. Men and women generally have different lifestyles, with women generally adopting more healthy lifestyles compared to men. In recent studies of dietary behaviors with respect to salt intake by Briar et al. and Gray et al., women were more likely to report and have less salt intake, and eat less from outside compared to men (22, 23).

Persons with prevalent diabetes knew their diabetes status and had encountered physicians or other health professionals with regards to the management of their condition; as part of the management of diabetes condition, patients are counseled to avoid lifestyles that will predispose them to cardiovascular diseases and limiting salt intake is one of the key management strategies of hypertension and subsequent cardiovascular diseases (27). In a prospective study of dietary salt intake and diabetes, salt was found to be associated with incident diabetes (28).

These findings represent yet another important dietary determinant of type 2 diabetes. One strength of the present study is the large sample size and the rigorous control of multiple covariates. Some limitations are, however, inevitable; diabetes status was determined using fasting blood glucose, we could have, therefore, missed some cases. In this study, the quantity and frequency of salt intake were not assessed; we were also unable to use objective measurements such as 24 h urinary Sodium measurement alongside the self-reported salt flavor preference. Relying on self-report may inevitably introduce reporting bias. But a previous study demonstrated a good correlation of self-reported dietary salt intake and a 24 h urine assay of salt (30). This study, being cross sectional by design cannot establish a causal relationship between dietary salt and diabetes.

Energy intake was not assessed and, therefore, not controlled for in our adjusted models. The effect of residual confounding due to measurement error in the assessment of confounding factors is also inevitable.

Our study demonstrated that preference for high intake of dietary salt is associated with undiagnosed diabetes but not prevalent diabetes. This association is fully mediated by obesity. More effort should, therefore, be directed toward limiting salt intake through education and strict regulation of processed foods. More prospective studies are needed to validate our findings.

CW conceived, designed the study, and secured funding. TA, TO, and CA-B analyzed the data. TA wrote the first draft of the manuscript. TR, XL, YW, and HZ supervised the data collection. ZM provided technical direction and writing assistance in the preparation of this manuscript. All authors critically revised the manuscript and approved the final version to be published.

We are grateful to the local authorities of the five counties, the staff of the local health service, administrative and research assistants, and all the participants of this study.

The Supplementary Material for this article can be found online at: https://www.frontiersin.org/articles/10.3389/fnut.2020.537049/full#supplementary-material

16. World Health Organization. Definition, Diagnosis and Classification of Diabetes Mellitus and Its Complications. Geneva: WHO (1999).

Copyright © 2020 Abdulai, Runqi, Mao, Oppong, Amponsem-Boateng, Wang, Liu, Zhang and Wang. This is an open-access article distributed under the terms of the Creative Commons Attribution License (CC BY). The use, distribution or reproduction in other forums is permitted, provided the original author(s) and the copyright owner(s) are credited and that the original publication in this journal is cited, in accordance with accepted academic practice. No use, distribution or reproduction is permitted which does not comply with these terms.