- RCTs enrolled adult subjects over 18 years old with high risks of CHD or confirmed CHD or not.

- RCTs were designed to compare omega-3 FA supplementation to control group with or without placebo.

- Outcomes of RCTs include one of the following events: all-cause death, MACEs, cardiovascular death (CV death), MI, stroke, and revascularization.

We assessed the risk of bias based on Cochrane collaboration tool for the methodological quality of included RCTs (17). Assessment elements of Cochrane collaboration tool include random sequence generation, allocation concealment, participant and personnel blinding, blinding of outcome assessment, incomplete outcome data, no selective outcome reporting and other sources of bias.

To further analyze the cardiovascular risks of omega-3 FA supplementation on specific populations, we divided the included experimental populations into subgroups with high risks of CHD, diagnosed with CHD, and with acute MI based on the participants' prior medical history to conduct relevant subgroup analysis. The subgroup of MI included RCTs enrolled subjects with acute MI within 3 months. CHD subgroup included RCTs that enrolled patients with old MI for more than 3 months and confirmed CHD.

A previous study performed by Bernasconi et al. found that cardiovascular mortality and fatal MI prevention can be achieved with < 0.8–1.2 g/d omega-3 FA, and the protective effect quickly plateaued with the increasing dosages (18). According to the treatment doses of omega-3 FA supplementation, we divided the included studies into low-dose studies with dose of < 0.8 g, moderate-dose studies with dose equal to or >0.8 and <1.2 g, and also high-dose studies with dose equal to or more than 1.2 g. The subgroup analyses of diabetes and sex were performed to determine the influencing factors of the cardiovascular effect of omega-3 FA supplementation.

We used the Peter's test and regression test for funnel plot asymmetry to assess the risk of bias. I2 was used for the heterogeneity between each RCTs. If I2 was <50% or p for heterogeneity more than 0.10, the fixed-effects model was used, and if I2 was >50% or p for heterogeneity < 0.10, the random-effects model was used. A sensitivity analysis was conducted to reduce and exclude sources of heterogeneity as follows. (1) We compared the calculation results of the random-effects model and the fixed-effects model to verify the robustness of the results of our research. (2) We eliminated each study in turn to observe the change in I2. If the value of I2 was significantly reduced after an RCT was eliminated, then the RCT is the source of heterogeneity. (3) We performed subgroup analysis according to the medical history of CHD, the doses of omega-3 FA supplementation, diabetes or not, and sex. In this meta-analysis, p < 0.05 was considered significant. R (version 4.1.1) was used to compute statistical tests [relative risks (RRs), confidence intervals, sensitivity analyses, and I2-test]. Tables and forest plots produced by R (version 4.1.1) were used to show data.

This research retrieved 20,819 articles, of which 20,777 were excluded based on the title and abstract. Subsequently, we excluded RCTs for samples <1,000 and assess non-supplement omega-3 FA (e.g., food fortified with omega-3 or dietary advice). Finally, 14 RCTs, including 1,35,291 subjects, were included in this meta-analysis. These subjects include people at high CHD risks, diagnosed with CHD, and patients with acute MI. A total of 67,704 subjects received omega-3 FA supplementation at doses ranging from 0.4 to 4 g, whereas 67,587 cases received control treatment. Figure 1 displays the determination of relevant RCTs and finally retrieved the process of obtaining the final literature. Table 1 shows the characteristics of the finally included 14 RCTs. 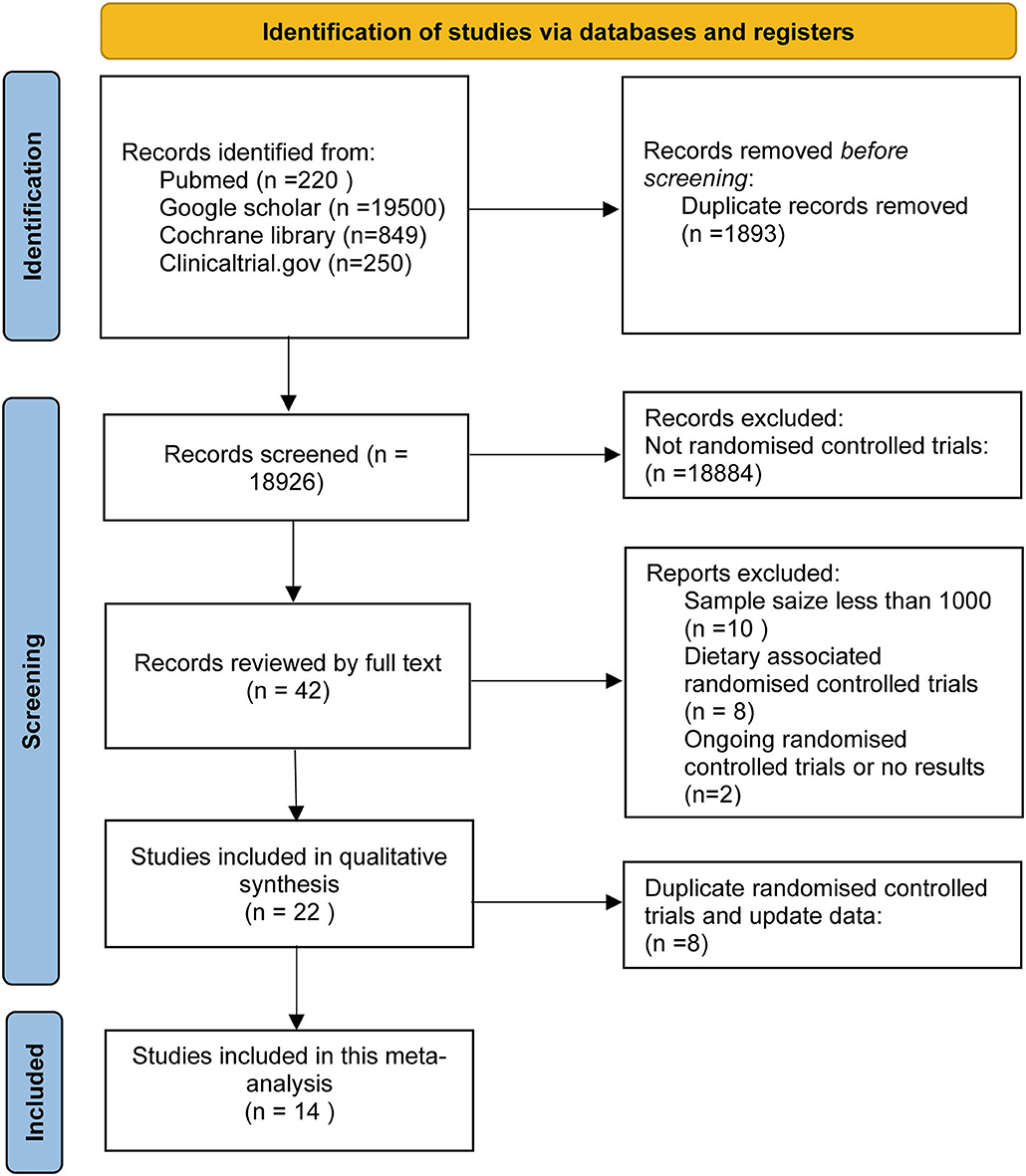 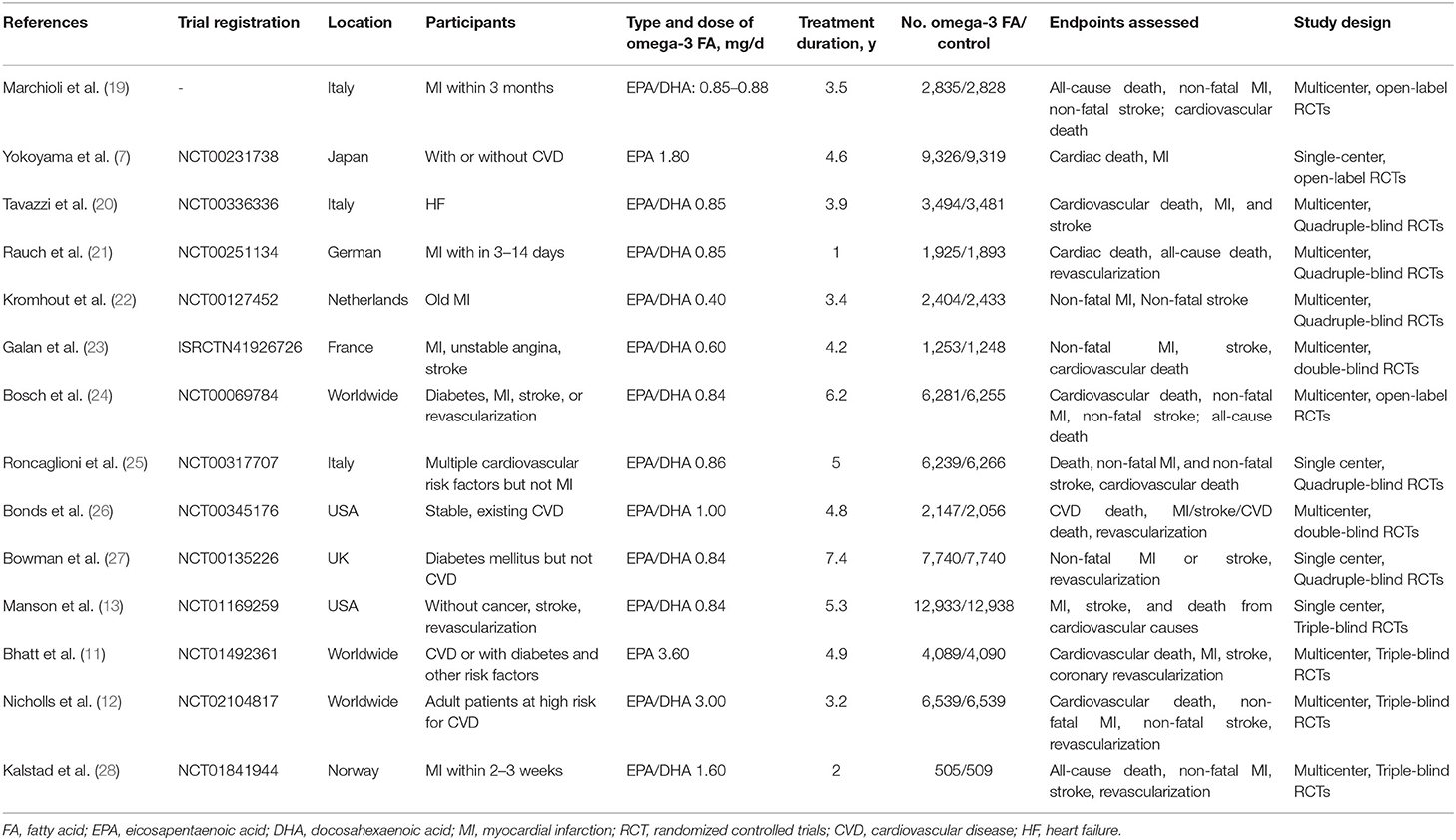 According to the design of each RCT, we used the Cochrane tool to score 14 RCTs for risk of bias. Figure 2 demonstrats the methodological quality for each RCT and showed the risk of bias of RCTs included in our meta-analysis was low. 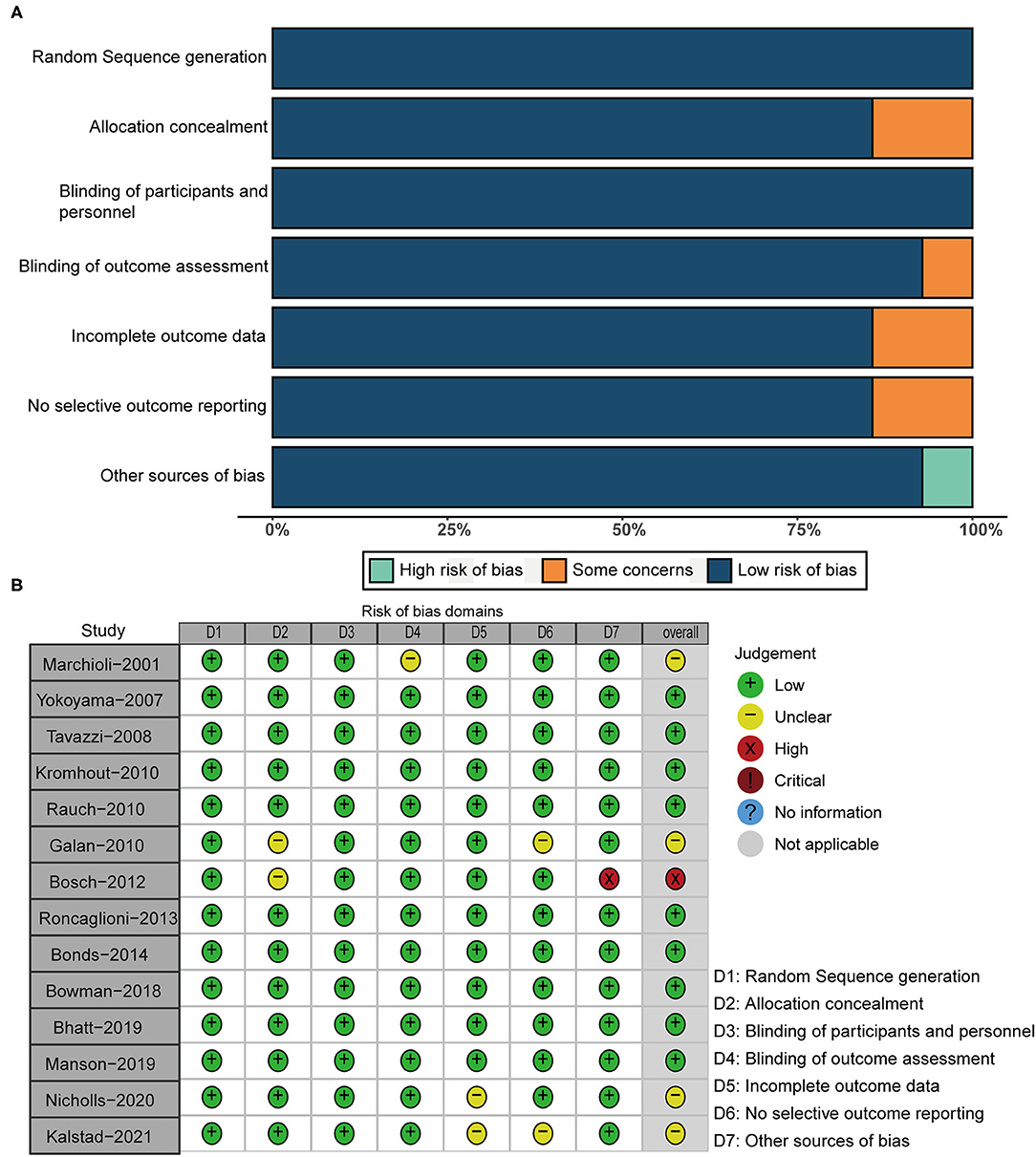 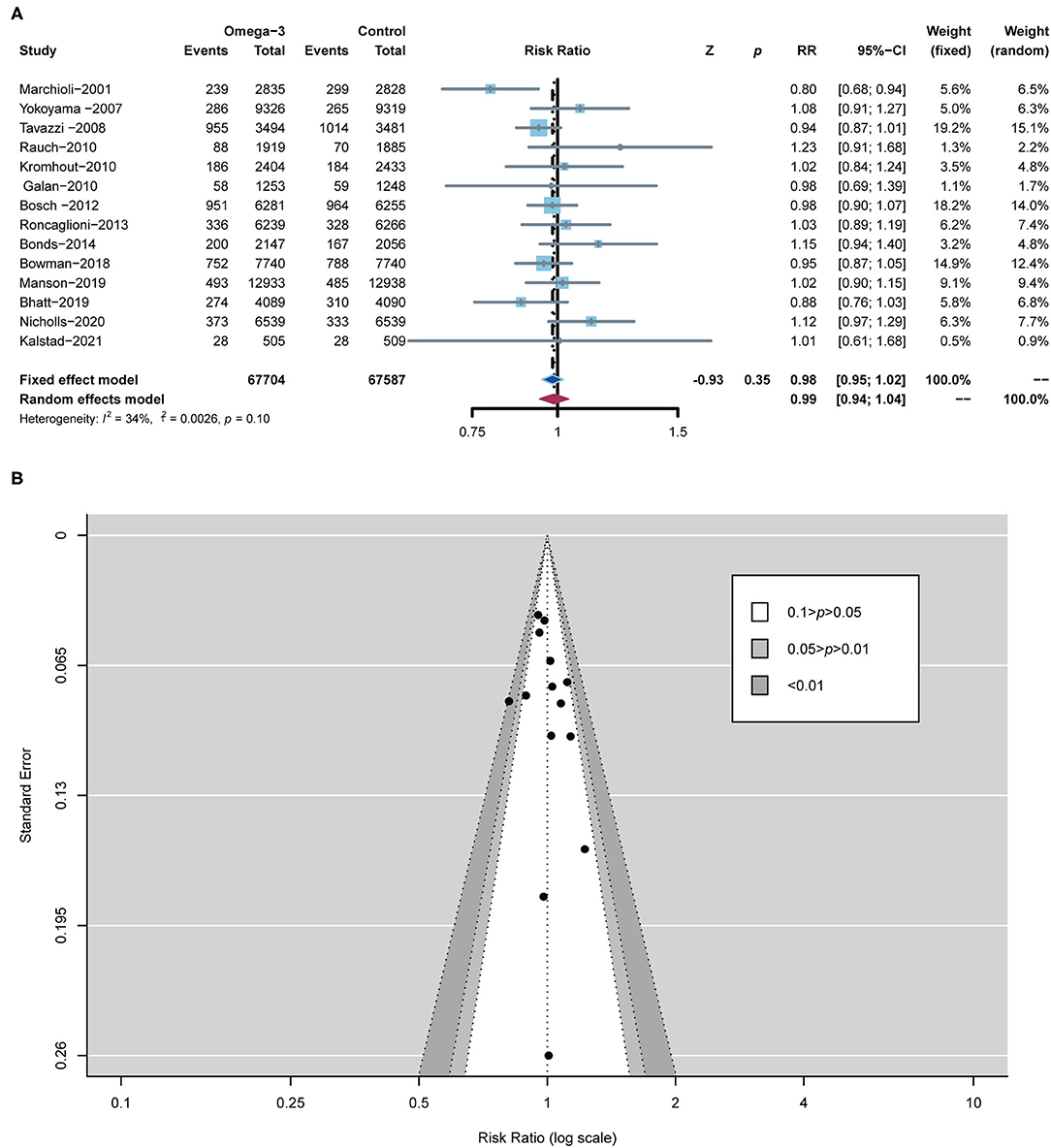 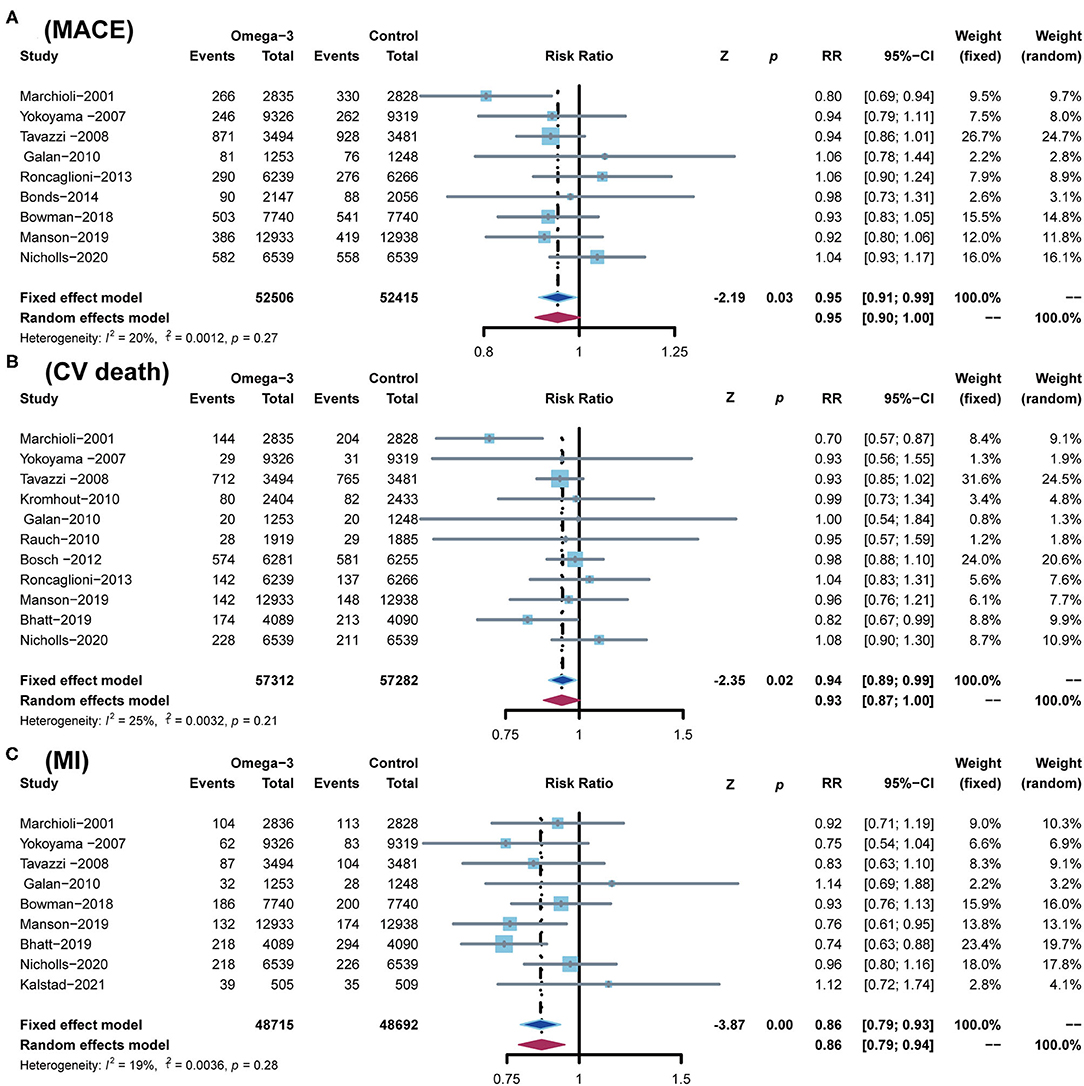 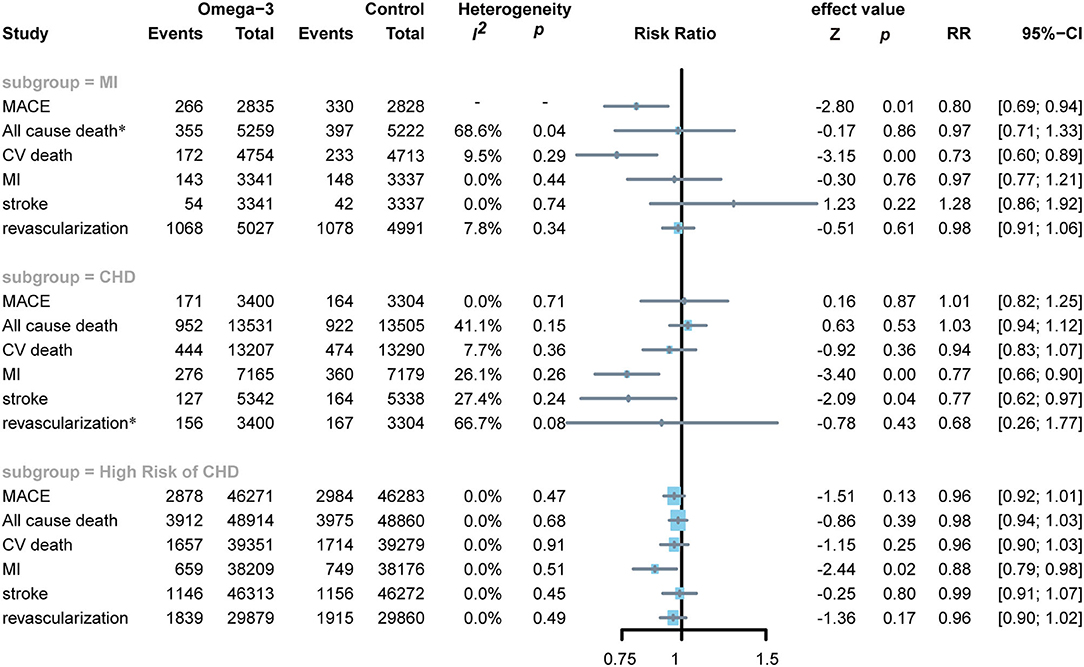 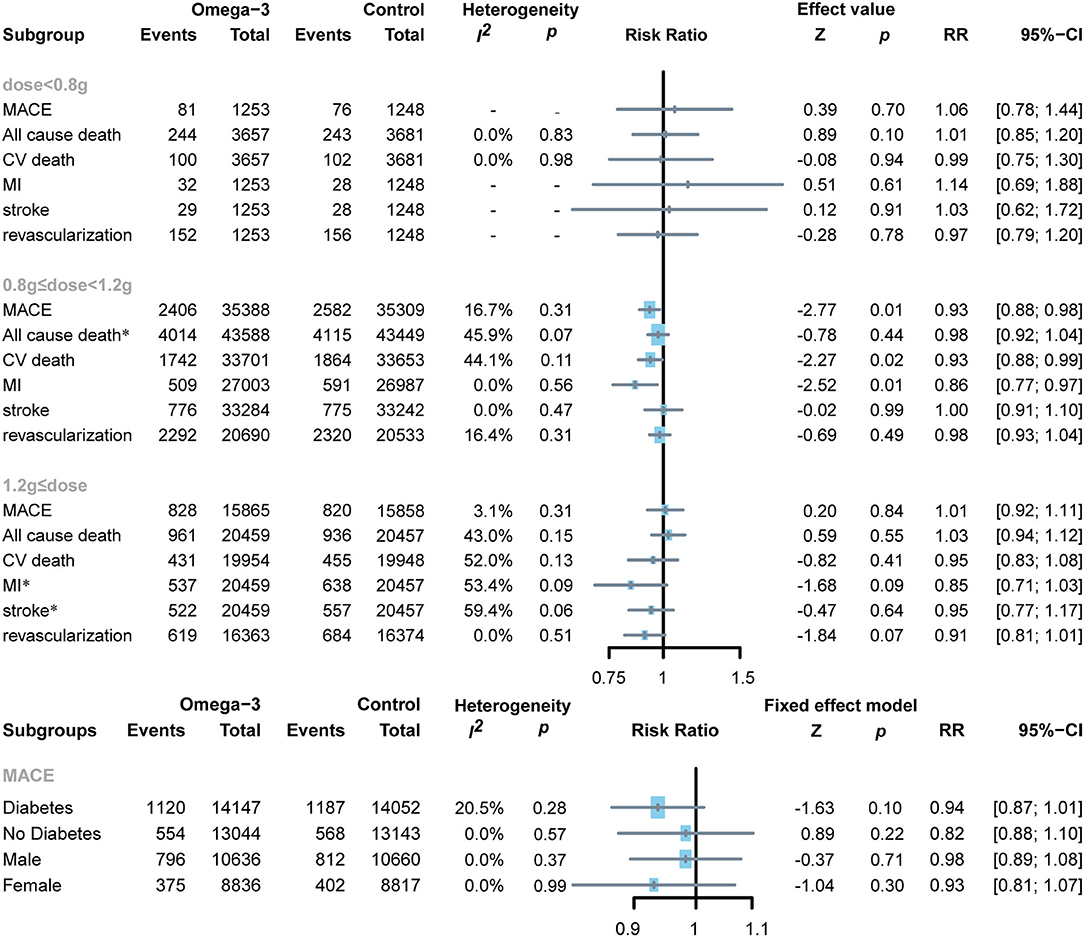 This research aimed to synthesize existing large-scale clinical trials and analyze the impact of omega-3 FA supplementation on cardiovascular risks. The included 14 RCTs that comprise trials with subjects at different development stages of CHD and used different omega-3 FA supplementation doses as interventions and with or without placebos as controls. It is commendable that all 14 RCTs had good methodological quality.

A recent meta-analysis conducted by Rizos et al. performed a prognostic event analysis based on the dose of omega-3 FA supplementation administrated in each included study (13). The meta-analysis reported outcomes including all-cause deaths, cardiovascular death, sudden death, MI, and stroke. In contrast to our research results, they disclosed that the application dose of omega-3 FA supplementation <1 g had a non-significant effect on the above results. Their meta-analysis included 17 studies, and the number of subjects included in each study ranged from 72 to 25,869. It is commendable that they included as many studies as possible to ensure the reliability of results. However, excessive studies with a small-sample size may lead to unreliable conclusions. It may explain why their results conflict with ours. Compared with the previous meta-analysis contains more RCTs, our research includes 14 RCTs. We strictly adhere to the inclusion criteria that the sample size of included RCTs must be >1,000. Our results were consistent in calculations by two effect models and Peter's test.

This study encounters some limitations. (1) Although this study strictly followed the inclusion criteria and included experiments with more than 1,000 subjects, the number of studies included in some subgroup analyses was relatively small. More research is still required to support our results. (2) The RCTs included in this study are mostly performed by Western countries and lack sufficient data on Asians. (3) Subjects with CHD and acute MI may receive basic secondary prevention strategies, and whether secondary prevention measures would affect the clinical benefits of omega-3 FA supplementation cannot be excluded. The previously mentioned limitations require more large-scale RCTs to investigate further.

SS and CG conceptualized the study, performed screening, data extraction, and data analysis by R software. Risk of bias was assessed by LZ and YX. Original draft preparation, reviewing, and editing were performed by SS, CG, and KJ. The work was supervised and funded by LM. All authors contributed to the article, approved, read, and agreed to the submitted version of the manuscript.

The Supplementary Material for this article can be found online at: https://www.frontiersin.org/articles/10.3389/fnut.2022.809311/full#supplementary-material

Supplementary Figure S1. Comparison of omega-3 FA supplementation vs. control group on the risks of stroke and revascularization.

Copyright © 2022 Shen, Gong, Jin, Zhou, Xiao and Ma. This is an open-access article distributed under the terms of the Creative Commons Attribution License (CC BY). The use, distribution or reproduction in other forums is permitted, provided the original author(s) and the copyright owner(s) are credited and that the original publication in this journal is cited, in accordance with accepted academic practice. No use, distribution or reproduction is permitted which does not comply with these terms.